CHAIR of the Food and Drug Monitoring Agency (BPOM) Penny Kusumastuti Lukito has stated that Nusantara vaccine promoted by former health minister Terawan Agus Putranto fails to abide by medical norms. One of the reasons is the location of research was different from that of the ethical committee issuing the trial license.

The clinical trial license was issued by the Gatot Soebroto Army Central Hospital in Jakarta. Meanwhile, the research was conducted at Dr Kariadi Central General Hospital in Semarang, Central Java. Penny explained that every research team should have its ethical committee in the research location. “The principle of good clinical practice was not fulfilled,” said Penny at a working conference with the Health Commission of the House of Representatives on Wednesday, March 10.

Nusantara vaccine is based on dendritic cells normally used for the treatment of cancer. This vaccine technology was developed jointly with a United States-based company, Aivita Biomedical, and Rama Emerald Multi Sukses.

The BPOM also found that at the initial stage of the research, the vaccine was not tested in animals. BPOM Drug Registration Director Lucia Rizka Andalusia said the Nusantara vaccine research team claimed that its clinical trials did not need animal testing. They argued that dendritic cells had often been used for cancer therapy. Appropriately, Rizka indicated, animal testing should remain required. At the working meeting, Penny Lukito said her agency could not yet give the vaccine the green light to carry on its phase II and III clinical trials.

Despite the absence of the BPOM license, the vaccine’s phase II clinical trial is said to be underway. To Tempo, on March 4, Rama Emerald spokesman Raditya Mohammer Khadaffi said the phase II clinical trial had begun. Terawan claimed that Nusantara vaccine was safe. “The Covid-19 vaccine is based on dendritic cells, it is individual in nature, which certainly is very safe,” he said.

THE clinical trial of Nusantara vaccine developed by Terawan Agus Putranto has not made smooth progress. The vaccine proposal was brought by his staff member when he was director of Gatot Soebroto Army Central Hospital, Taruna Ikrar, who is now Chairman of the Medical Council.

• March 2020
Taruna brings the proposal for a dendritic vaccine developed by Aivita Biomedical Inc to Terawan.

• November 16, 2020
The Decree of the Health Minister on the clinical trial research team for the SARS-CoV-2 dendritic cell vaccine is issued.

• February 16, 2021
The Health Commission of the House of Representatives monitors the vaccine’s developments and supports its research at Dr Kariadi Central General Hospital, Semarang. At the time, the name Nusantara vaccine is released. 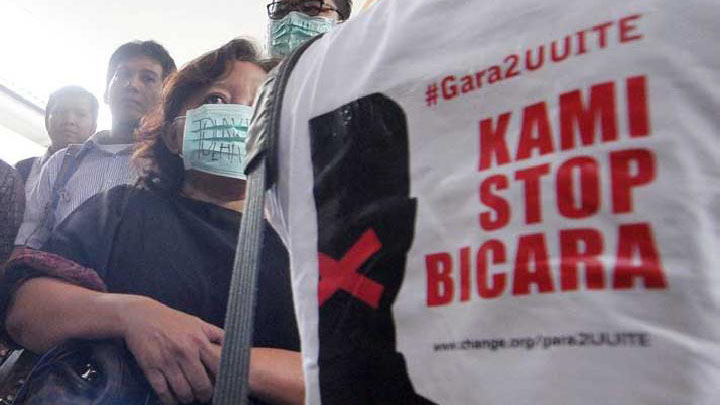 THE government and the House of Representatives (DPR) have not included a revision of the Electronic Information and Transactions (ITE) Law in the Priority National Legislation Program for 2021. “It’s still under public hearing. This also has to do with the Bill on the Criminal Code that we have discussed,” said Justice and Human Rights Minister Yasonna Hamonangan Laoly on Tuesday, March 9.

In mid-February, President Joko Widodo expressed the intention to revise the ITE Law. However, later the government chose to make interpretations of the problematic articles in this law. DPR Legislation Body Deputy Chairman Willy Aditya said the circular of National Police Chief Gen. Listyo Sigit Prabowo, asking his personnel to prioritize dialogues in ITE Law cases, was quite effective.

Executive Director of the Southeast Asia Freedom of Expression Network, Damar Juniarto, questions the government’s commitment to the revision of the ITE Law. The revision is needed to prevent criminalization by the use of catchall articles in this law.