The Three Brigadiers and the Two Car Conundrum


The National Police' Criminal Investigation Department investigated three officers with the rank of brigadier in the case of extrajudicial killings of members of the Islam Defenders Front (FPI). The reconstruction did not explain the fact that all of the victims died with gunshot wounds straight to the heart.

PRESIDENT Joko Widodo changed his gaze to a red box with a compact disc inside. He lifted the box with his right hand as he showed it to the guests, a group calling themselves the Guard Team for the Murder of the Six Islam Defenders Front (FPI) Members, whom he met with at the State Palace on Tuesday, March 9.

The disc holds the results of the investigation and the recommendations of the National Commission on Human Rights (Komnas HAM) which were submitted to the President in mid-January. “The President admitted that he had read the contents of the report and stated government’s commitment to resolve the matter fairly and transparently,” said leader of the Guard Team Abdullah Hehamahua, recounting the meeting to Tempo, last Wednesday, March 17.

President Jokowi spent three minutes expressing his views on the matter. According to Abdullah, during the meeting Jokowi occasionally glanced at the Coordinating Minister for Political, Legal and Security Affairs Mohammad Mahfud Md. and Minister of State Secretary Pratikno. In the ranks of the Guard Team, Abdullah was accompanied by the former speaker of the People’s Consultative Assembly, Muhammad Amien Rais, and six other members. There was no question-and-answer session at the time.

The Palace received Abdullah and his friends after the group requested an audience. Abdullah said they sent a letter to the Palace on February 4. A few days earlier, the Guard Team garnered support from a number of political figures. Former deputy chairman of the Corruption Eradication Commission, Busyro Muqoddas, and a member of the Regional Representative Council, Marwan Batubara, also signed the petition. 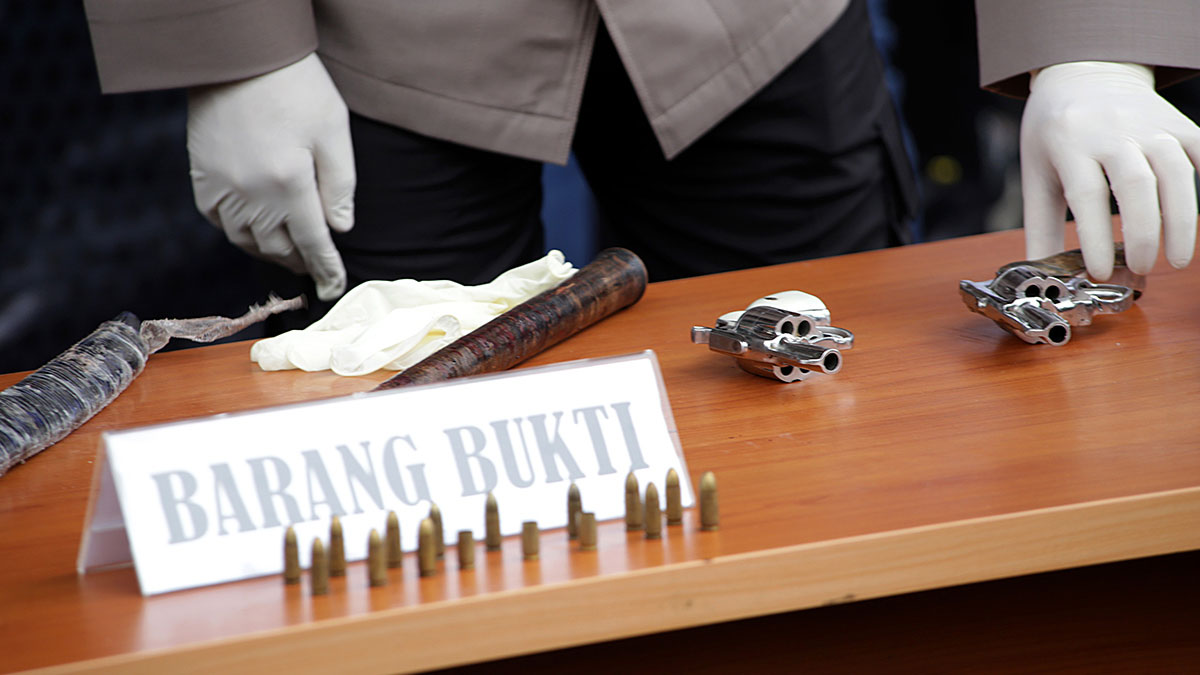 Among other things, the petition urged the government to announce the name of the police officers who allegedly shot dead six Islam Defenders Front (FPI) members—four of whom were allegedly killed illegally because they were already under arrest. The petition also demands a transparent legal process. The Guard Team submitted the petition to Jokowi at a meeting at the Palace.

Abdullah considered that the legal process for the death of six FPI members at the Police Criminal Investigation Department (Bareskrim) was slow. Two months after the Komnas HAM published the results of its investigation, the police never named the suspects of the unlawful killing as stated in the Komnas HAM’s recommendation. “There are indications that the country is unable and unwilling in this case,” he said.

The Komnas HAM issued four recommendations after investigating the deaths of six FPI members on the Jakarta-Cikampek Kilometer 50 toll road in Karawang, West Java, on December 8, 2020. In addition to urging the investigation of allegations of human rights violations and extrajudicial killings, the Commission asked law enforcement to trace two homemade handguns and two mysterious cars on the day of the murders.

The incident began when FPI leader Muhammad Rizieq Shihab was about to go to Karawang from his family residence in Sentul, Bogor, West Java. Rizieq was escorted by two cars, each containing six members of the FPI. The group of bodyguards tried to block three cars that tried to approach the vehicle Rizieq was on.

The situation escalated when the group exited the toll road gate of East Karawang towards a nearby residence. Two members of the FPI are believed to have died during a car chase in the city. Four other members died after they were in custody of three policemen who were taking them from the toll road rest area at Kilometer 50 on their way to Jakarta. According to the police, the four FPI members tried to seize the officers’ firearms, and were killed subsequently.

The Komnas HAM considers the deaths of four members of the FPI as a violation of human rights. The police murdered civilians who were already under arrest. The three policemen who arrested them allegedly failed to prevent further casualties. “After meeting with the Komnas HAM, President Jokowi promised to follow up on these recommendations," said Komnas HAM Commissioner, Beka Ulung Hapsara.

A DAY after President Joko Widodo’s meeting with the Team for the Murder of the Six Islam Defenders Front Members led by Abdullah Hehamahua, the Bareskrim conducted the case review. On that same day the police raised the status of the case on the murder of four members of the FPI as an official investigation.

The Bareskrim immediately sent an order to start an investigation to the Attorney General’s Office (AGO). However, investigators have yet to name any suspect. Investigators only determined three police officers with the rank of brigadier who were in the car along with four FPI members as the reported party. “The suspicion points to three officers of the National Police,” said General Crime Director Brig. Gen. Andi Rian Djajadi.

The police are still mum on the identity of the three officers. Based on information obtained by Tempo, the three are 1st Brig. Fikri Ramadhan Tawainella, Chief Brig. Faisal Khasbi Alaeya, and Chief Brig. Adi Ismanto. They are assigned to the Sub-directorate of the Mobile General Criminal Investigation Directorate for at the Greater Jakarta Metropolitan Police.

Chief of Public Relations at the Jakarta Metro Jaya Police, Sr. Comr. Yusri Yunus, did not provide an explanation until Saturday, March 20. Meanwhile, Insp. Gen. Raden Prabowo Argo Yuwono, Chief of the Public Relations Division of the National Police, kept his answers brief. “Just wait for the investigation to finish,” he said. However, Yusri and Argo did not refute when Tempo mentioned the names of the three police officers in a short message requesting confirmation.

The names Fikri, Faisal, and Adi were mentioned when Bareskrim investigators examined Dedi alias Abah, 54, the driver of a tow truck on the Jakarta-Cikampek toll road. When the incident happened, Dedi was the last person to see the four FPI members still alive. He also saw the four members were put into a Daihatsu Xenia car, together with three police officers.

Dedi was questioned at the Komnas HAM office in Jalan Latuharhari, Central Jakarta. Investigators brought up the names Fikri, Faisal, and Adi, then asked if Dedi knew the three of them. “I said, I don't know,” said Dedi.

Chief of the National Police Public Information Bureau, Brig. Gen. Rusdi Hartono, confirmed that the status of the three police personnel was only reported, not yet a suspect. Investigations are ongoing on who was most responsible among the three in the death of four FPI members.

Later, according to Rusdi, the investigator will charge the suspect of unlawfull killing with the article of murder or excessive force. The threat of punishment is up to eight years in prison. “To help the investigation process, the three of them have been relieved of their tasks,” said Rusdi.

SIGNS of blood can be seen splattered on the back seat of the Daihatsu Xenia car that carried the four FPI members. Blood could also be seen pooled inside a cup holder between the front seats. The Komnas HAM team searched the car, which is currently parked at the Jakarta Metro Jaya Regional Police Headquarters after the shooting incident on the Jakarta-Cikampek toll road.

Komnas HAM Commissioner Beka Ulung Hapsara said his team had reconstructed the shooting incident. The reenactment shows that the shooting began when an FPI member allegedly attempted to seize the firearm of the officer sitting in the middle seat.

Three other FPI members who sat in the very back row tried to help their peer. Seeing this, the police officer sitting in the front seat drew his gun and then fired a bullet. The police in the middle seat also shot his gun after he regained his weapon. “But that’s the police version of the statement. We have no comparative information,” said Beka. 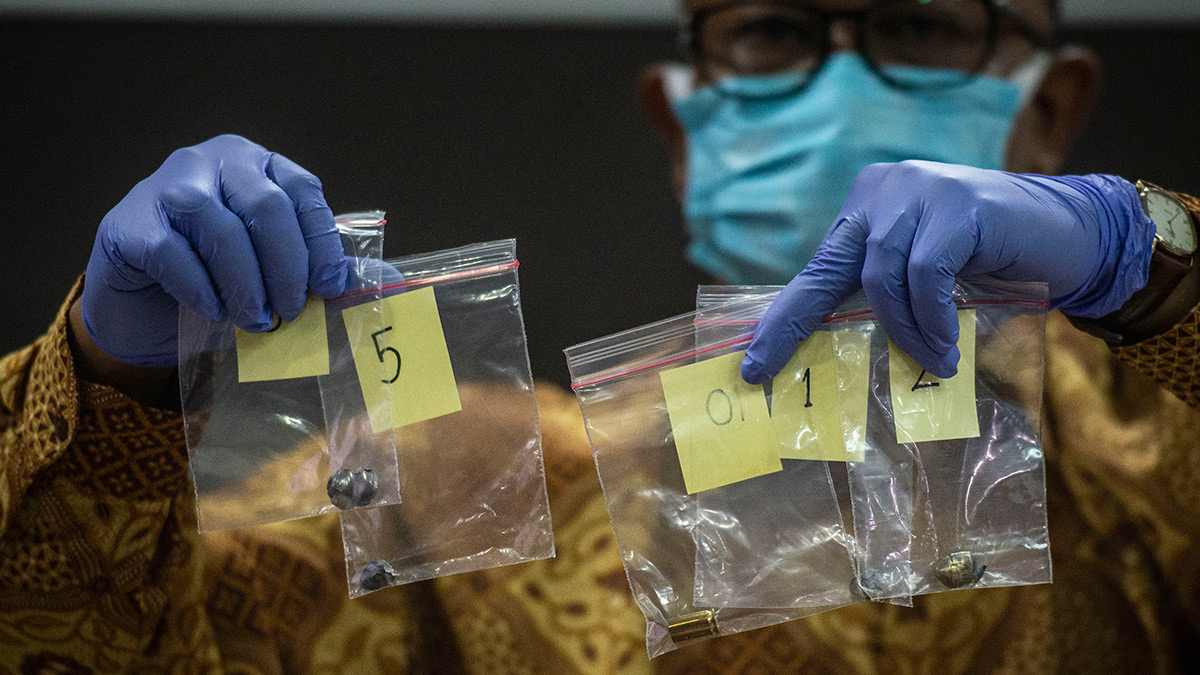 Komnas HAM Commissioner Mohammad Choirul Anam displays the projectiles and bullet casings at the press conference on the investigation development and findings on the incident that killed six FPI members, at the Komnas HAM Office, Jakarta, last December. Antara/Aprillio Akbar

According to Beka, only two out of three police officers opened fire on FPI members. The officer who was driving remained at the wheel. However, the reconstruction did not explain how all of the victims died with gunshot wounds straight to the heart.

The reconstruction also did not answer the mystery of the direction of the fire and the number of gunshot wounds compared to the projectiles found. “We have examined the investigation of weapons and projectile findings at the forensic laboratory center. The results are still consistent,” said Beka.

He asked the police to carry out the recommendation of the Komnas HAM to trace the possession of homemade firearms and the whereabouts of two other cars that night. “These two things will open the mystery behind the series of events of the deaths of six FPI members,” he said.

The police claimed to have obtained the two homemade revolvers after the shootout incident with the FPI members. They also said that they received information that the FPI had prepared the weapons long before.

This information came from a conversation between Andi Oktiawan, a member of the FPI who was latter killed, with his colleague at the end of November 2020. The conversation indicated that Andi has asked about the purchase of a weapon coded with the name of a fruit. Police believe the gun was the weapon used to attack the police officers.

The lawyer and former secretary-general of FPI, Munarman, denied the police allegations. According to him, the conversation between the two did not discuss the purchase of firearms. “I checked with the victim’s cousin. It’s not true that it was about weapons,” he said.

Munarman brought up the matter of the whereabouts of two cars that night. According to him, two cars were seen at the residence of Rizieq Shihab’s family in Sentul, three days before the shooting incident. The cars also chased Rizieq’s group on the toll road and were present at the time of a clash in a residential area in Karawang.

Beka Ulung said his team had traced the two cars. From a number of statements, the two cars had the number plates B-1759-PWQ and B-2178-KJE. The Komnas HAM has searched the two numbers in the motor vehicle database. “The two numbers have never been recorded in the vehicle ownership register,” he said.

Inspector Gen. Raden Prabowo Argo Yuwono was reluctant to respond to the requests to follow up on the two Komnas HAM recommendations. “Let the investigators work,” he said.