The KPK seized Rp52.3 billion in cash in relation with the lobster larvae export corruption case at the marine affairs and fisheries ministry. It is suspected that the money is fees extorted from the exporters.

That money was kept at a state-owned bank since June 2020. The KPK seized it almost 10 months later.

KPK spokesperson Ali Fikri said that the cash is related to bribery in the lobster larvae export permits, which has led to the arrest of Marine Affairs and Fisheries (KKP) Minister Edhy Prabowo. “It is expected to come from exporters who have received permits from the ministry of marine affairs and fisheries to export lobster larvae in 2020,” said Ali on March 15.

Since investigating the case in late November last year, the KPK has named seven suspects. In addition to Edhy Prabowo, they are ministry expert staff member Safri, the minister’s private secretary Amiril Mukminin, staff member of the minister’s wife Ainul Faqih, and ministry expert staff member Misanta Pribadi. Also suspects are Siswadi, boss of Aero Citra Kargo and Perishable Logistics Indonesia, and Suharjito, director of Dua Putra Perkasa. All of them were arrested during a KPK sting operation on November 24, last year.

Edhy allegedly received Rp3.4 billion and US$100,000 in bribes from entrepreneurs who attempted to get lobster larvae export permits. The bribes were then laundered through Aero Citra Kargo and Perishable Logistics Indonesia. Both companies are sole shipping providers for lobster larvae exports.

Edhy’s corruption modus operandi was not just in stipulating shipping services monopolies. According to a law enforcer, Edhy is suspected of obtaining money through bank guarantees. The amount of money gathered totaled Rp52.3 billion, which was then seized by the KPK.

When suspicions started arising, the money was claimed as collection for non-tax revenues (PNPB). However, the government has not yet issued regulations for such collections. On November 25, 2020, the finance ministry assured that regulations for the lobster larvae exports PNBP have not been issued. So far, these exports have been carried out without regulations. “It’s still in the final stages at the state secretariat for its conclusion,” said Askolani, the director-general for budgets at that time.

Suspicions that the Rp52.3 billion came from illegal sources, the law enforcer further said, was because collections were not done in a transparent and accountable way. Officials can directly intervene in the collections process.

In setting up the bank guarantees, Edhy had allegedly given orders to Antam Novambar, secretary-general at the marine affairs and fisheries ministry. Antam then wrote a letter with those orders to the Fish Quarantine and Inspection Agency (BKIPM). He ordered the BKIPM to ask for a bank guarantee from the exporters.

Ali Fikri explained that the BKIPM then responded to Antam’s letter by ordering the Quarantine Office Chief of Jakarta I Soekarno-Hatta to accept the bank guarantee deposit. In fact, that deposit had no legal basis. “We believe that regulations for a bank guarantee from the exporters as a form of commitment to execute lobster larvae exports never existed,” said Ali.

This illegal extortion is expected to have started since the ministry allowed the export of lobster larvae on May 5, 2020. However, the first batch of the export was only shipped out a month later, with Hong Kong and Vietnam as destinations. Edhy set the kickback at Rp1,000 for each lobster larvae. In the bank guarantee terms, the exporters deposited payment guarantees with a maximum of Rp75 million for each export batch. From June until November 2020, some 41,135,605 lobster larvae have been exported by 54 companies.

Investigators tried to clarify these collections to Antam Novambar and Marine Affairs and Fisheries Ministry Inspector-General Muhammad Yusuf on Wednesday, March 17. Antam did not show up, with the excuse that he was traveling to the coastal area. Tempo tried to confirm this to the retired commissioner general through his Whatsapp, but he neither responded to that nor to an interview request until Saturday, March 20.

KPK investigators questioned Muhammad Yusuf for about two-and-a-half hours. During that time, he explained the origins of establishing bank guarantees for exporters. He said that Edhy had already submitted regulations regarding the PNBP for lobster larvae exports to the finance ministry since April 2020.

The finance ministry then responded to the letter and asked the marine affairs ministry to revise its current policy, which is Government Regulation No. 75/2015 regarding the PNBP at the marine affairs and fisheries ministry. Edhy and his team then prepared its draft. The existing government regulation puts the tariff on lobster exports on Rp250 for every 1,000 larvae.

Based on that regulation, said Yusuf, Edhy considered that the money received by the state was too little. In fact, Yusuf continued, based on studies in several countries, lobster larvae are estimated at US$5-8 for each larvae. “This is an endeavor by the KKP to assure the state’s rights are implemented,” he said.

Because the export process was already starting, Edhy did not want the state to be left empty handed. So, although there was no legal basis yet, Edhy required exporters to deposit their payment guarantees. 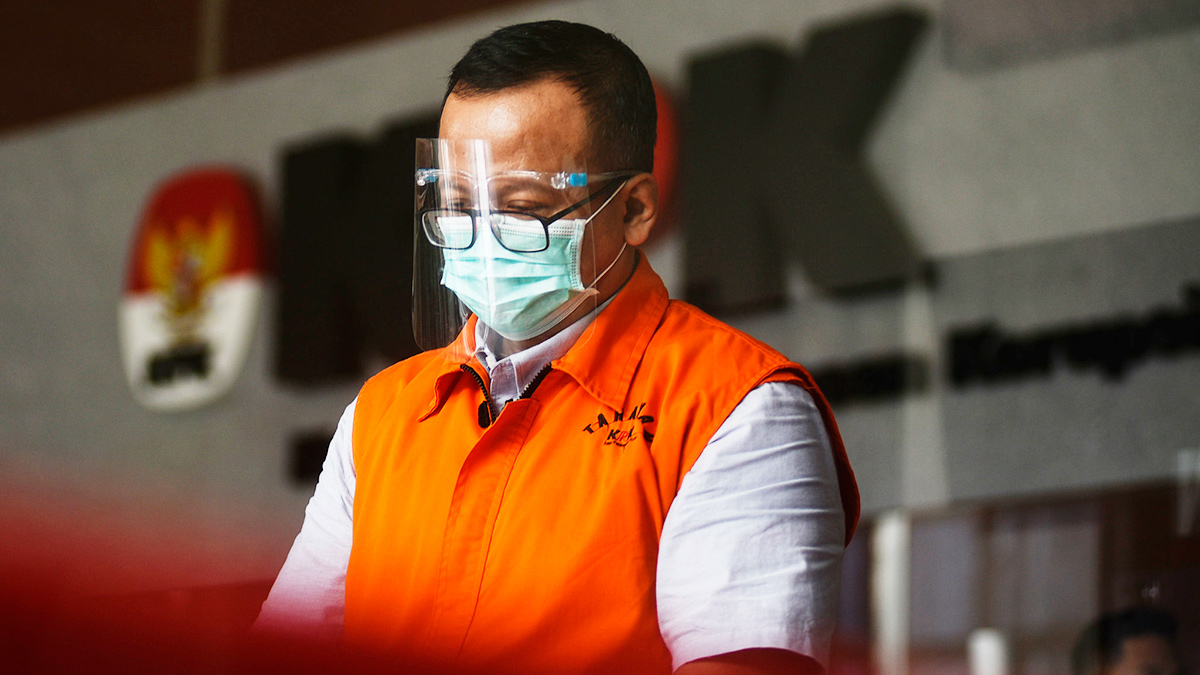 Companies would not be able to cash in on their payment guarantees unless they have a marine affairs ministry permit. “If the PNBP regulations are not issued, or not issued retroactively, then the bank guarantee money will be granted to the state,” said Yusuf.

Yusuf further said that he got into a debate about the regulation with the investigator during his questioning. This former chair of Indonesian Financial Transaction Reports and Analysis Center (PPATK) said that he hoped the money seized by the KPK could be returned to the marine affairs ministry. His institution plans to deposit the money as PNBP into the state coffers.

He further denied that these payment guarantees are part of a new kickback mode. “This is not a new corruption method. Please focus on our good intentions,” he said. For him, the most important thing is that the money goes to the state.

Soesilo Aribowo, Edhy Prabowo’s lawyer, said that his client was surprised when the KPK seized the Rp52.3 billion. Soesilo said that Edhy questioned where the money came from. When he heard about the amount, the former minister from the Gerindra Party said he finally remembered that it was the money from the exporters’ bank guarantees.

Soesilo said that Edhy is indeed the first person who demanded payment guarantees from exporters. Like Yusuf, Edhy did not want the state to receive next to nothing from lobster larvae exports. “Pak Edhy wants more money to go to the state,” said the lawyer.