DOZENS of people filled the main room of the East Jakarta District Court on Friday, March 26. In the front row, a daughter and son-in-law of Muhammad Rizieq Shihab are seen attentively following the court proceedings, which went on from morning till afternoon

Rizieq, the leader of the Islamic Defenders Front (FPI), was present for the first in-person court proceedings. A dozen lawyers, in addition to the defendant, took turns in reading out two objection notes for two cases brought against Rizieq: causing large gatherings in the areas of Petamburan, Central Jakarta, and Megamendung, Bogor, West Java.

During the closed court session, dozens of police stood guard at the entrance of the court building since morning. Police also formed a human shield in front of the court gates. Groups of Rizieq supporters arriving in waves until the afternoon were only able to assemble outside the court building. Only officials and people with special permits were able to enter the premises that day.

In the same courthouse, Rizieq is also being tried for disseminating lies about a Covid-19 swab test at the Ummi Hospital in Bogor, West Java. That court case is done separately, and presided over by different judges.

As a defendant in three trials, Rizieq has a slew of 53 lawyers defending him. However, only 12 of them were allowed in the courtroom on Friday. “The proceedings were tightly run,” said Sugito Atmo Prawiro, one of Rizieq’s lawyers.

Suparman Nyompa, the chief judge for the Petamburan mass gathering case, finally agreed to Rizieq’s legal team’s request to carry out the court proceedings offline, and with security assurances. When it started on March 16, the judge had decided that the proceedings should be done online. 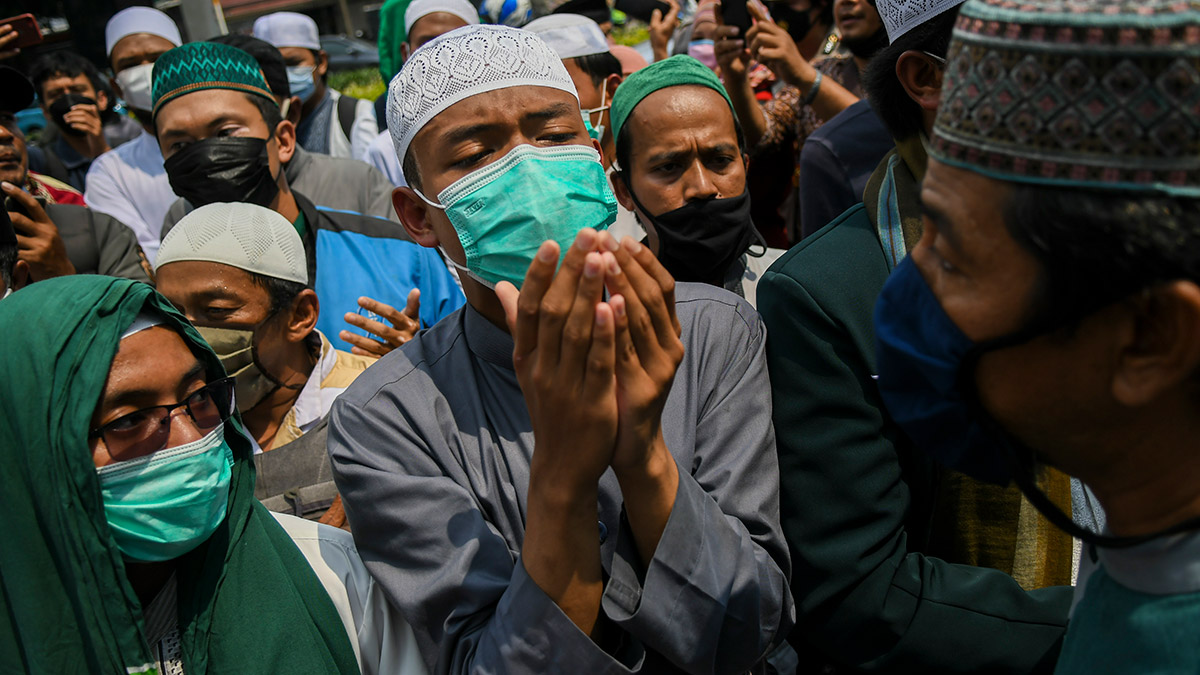 The plan was that Rizieq, 55, was to follow the session from a holding cell at the National Police’s Criminal Investigation Department in Kebayoran Baru, South Jakarta. “If the petitioner violates a guarantee letter, then the petition will be taken into consideration again,” said Suparman.

Before the decision to hold the trial offline, the sessions were filled with plenty of ‘drama’. Rizieq refused to sit on the seat for the defendant. He also did not answer all questions. However, officers still tried to have him sit in the defendant chair. “I was coerced, shoved, humiliated,” said Rizieq on March 19.

Rizieq faces three legal cases since he returned home to Indonesia on November 10, last year. Two days after his arrival, Rizieq, together with a committee, organized a religious celebration, Maulid Nabi, to celebrate Prophet Muhammad’s birthday at the FPI headquarters in Petamburan. Thousands of people, arriving from different regions, attended the occasion.

The police brought forward two cases from the three mass gatherings, all occurring during the Covid-19 pandemic. Besides Rizieq, others were also named as suspects in the Maulid celebration in Petamburan and the wedding party, namely former FPI general chairman Ahmad Sabri Lubis, former FPI treasurer Haris Ubaidillah, FPI commander Maman Suryadi, Ali Alwi Alatas and Idrus Al-Habsyi. All of them were part of the organizing committees of the Maulid and wedding celebrations.

Rizieq is also accused of spreading lies about the results of a swab test at the Ummi Hospital in Bogor. His son-in-law Muhammad Hanif Alatas was also arrested, as was the hospital’s director, Andi Tatat. “Some of Pak Andi’s lawyers are also in the legal team of HRS (Haji Rizieq Shihab),” said Sugito.

Those defendants are sitting in an offline court session, but separate from Rizieq’s. Since the beginning of the trial, the legal team has demanded that the judges allow the sessions to be offline. Meanwhile, the prosecutors insisted that they be online, referring to the Supreme Court Regulation No. 4/2020 as the legal basis.

Tension between the prosecutors and lawyers peaked on Tuesday, March 23. Munarman, one of Rizieq’s lawyers, scolded one of the prosecutors, demanding the prosecutor—who interrupted Munarman several times—to be quiet. “You shut up! Be disciplined. We have been orderly since the beginning. Don’t disrupt things,” yelled Munarman.

The legal team also took issue with the location of the session. In a rebuttal in the Petamburan gathering case, titled Knocking on Heaven’s Door, Rejecting Injustice, Upholding Justice, Rizieq and his legal team said that the proceedings should be held by the court at the event’s location. “We believe the East Jakarta District Court does not have the jurisdiction (for the case). It occurred in Megamendung (West Java) and Central Jakarta,” said Sugito.

Sugito also focused on the multiple articles used against Rizieq. This FPI founder faces at least 13 articles in three cases. The accusations vary, including one with a maximum jail sentence of 10 years. Meanwhile, Sugito continued, the Petamburan mass gathering incident had already been solved because the organizing committee paid a Rp50-million fine to the Jakarta administration. The accusation, he said, can potentially violate ne bis in idem, where a defendant is punished more than once for the same offence. 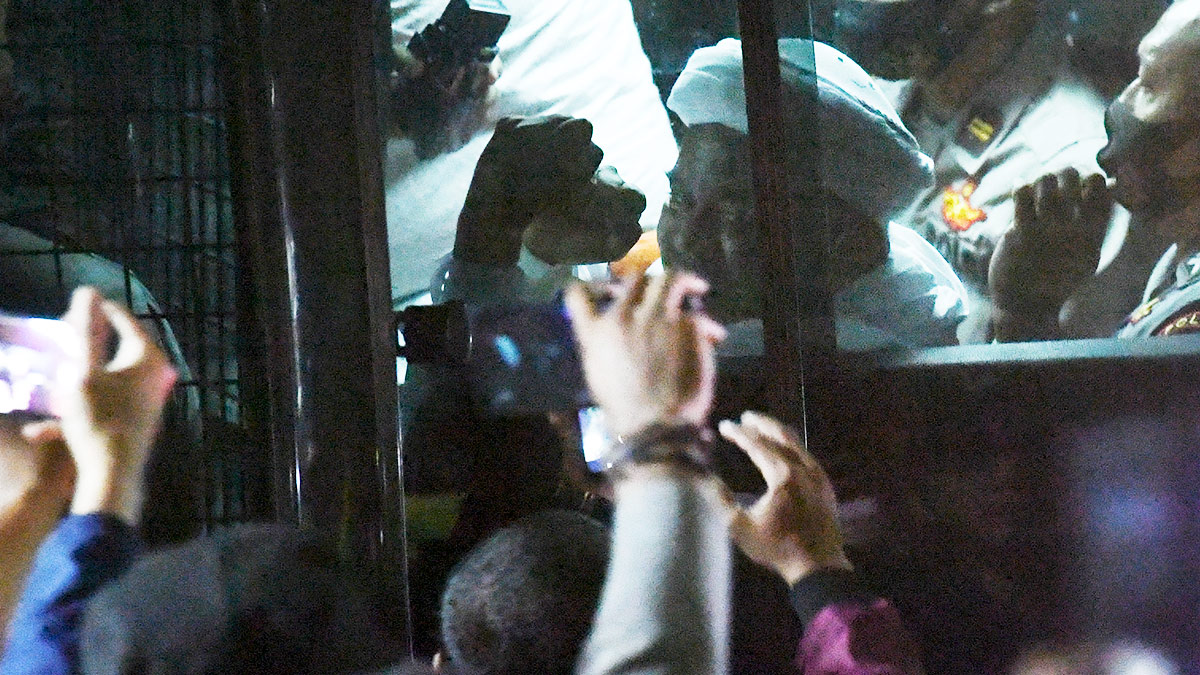 The legal team also accused the prosecution for inserting Article 82A paragraph 1 in conjunction with Article 59 paragraph 3c and 3d of the Mass Organizations Law on violence that disrupts public order, and the authority of law enforcers. There is also Article 10 in conjunction with Article 35 of the Criminal Code (KUHP) regarding additional crimes in the form of political rights removal. “The letter ordering the investigation and the letter informing the beginning of the investigation did not include this article,” said Sugito.

Leonard Eben Ezer Simandjuntak, Supreme Court’s Chief of Legal Information, did not want to get into the application of the layered articles against Rizieq and the five other defendants. “This is already part of the case material. Let’s just follow the court proceedings,” he said.

Sugito criticized the cases against Rizieq and the five former FPI officials as being politically motivated, pointing out that the Mass Organizations Law is unrelated to quarantine regulations during the pandemic. This is why the legal team asked that Rizieq’s court session should be open to the public, who can then follow the proceedings.

He also said that his team felt intimidated in the offline session on Friday. He believed that the majority of those present in the courtroom were plain-clothed officers, as those present for Rizieq were only the legal team and Rizieq’s family members. “We ask the judges that there are media representatives present in the room during the sessions,” he said.