Worship in the Time of Emergency


A number of policies to deal with the pandemic this past year have an impact on Muslim rituals. Social worships and rituals are increasing. This report is the result of a collaboration between Tempo and Rappler, supported by the Sasakawa Peace Foundation.

THERE are things that have not returned to Anwar Abbas’ worship routines despite one year passing of the Covid-19 pandemic. The deputy chairman of the Indonesian Ulema Council (MUI) still has to keep his distance when praying at a mosque near his house in the Ciputat area, South Tangerang, Banten. In fact, praying in close ranks is highly encouraged. He also stopped shaking hands with other members of the congregation, replacing it with the gesture of clasping his palms together in front of his chest.

Abbas realized that closing ranks was a religious order. Likewise, maintaining a distance so as to avoid the possibility of spreading or contracting the SARS-CoV-2 virus that causes Covid-19. “The hadith (a record of the words and actions attributed to the Prophet Mohammad) of the Prophet said that we should not injure and be injured by others. Therefore, we must be careful,” said the Chairman of the Muhammadiyah Central Board on Sunday, March 21.

Changes in the practices of worship and the important role of religious leaders in the midst of this pandemic are what we see in Indonesia, a country with 270 million people and the largest Muslim population in the world. A similar situation is found in neighboring Philippines, a country of 110 million people with the largest Catholic population in Asia and the third largest in the world. 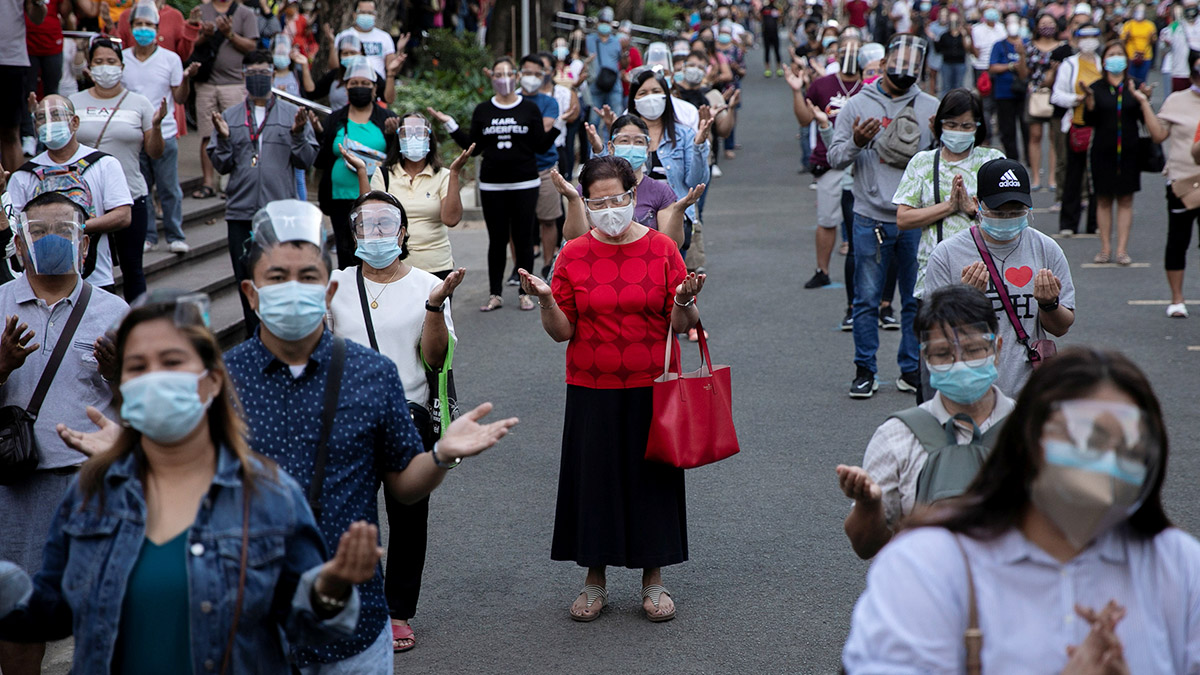 The Friday prayer is one of the religious services that are directly affected by the policy of keeping distance. Head of the Tanfidziyah Daily Executive Board of the Nahdlatul Ulama (NU) Executive, Robikin Emhas, revealed that the law of congregational Friday prayers in mosques is compulsory, equivalent to the five daily prayers—sunrise, midday, afternoon, sunset, and night. Those who deliberately ignore it three times in a row can lose their religion or become infidels.

Robikin revealed that from the beginning he had the view that during this pandemic, Friday prayers could be replaced with midday prayers at home for emergency reasons, namely preventing transmission. That view had sparked protests. “Some even say I am an infidel,” he said. The NU issued a fatwa (edict) regarding this matter on March 19, 2020. It advised those in the pandemic red zone to perform Friday prayers at home. Muhammadiyah issued a similar advice on March 24, 2020.

The need to avoid possible infection has also changed the rituals for Covid-19 casualties. Chairman of the NU Task Force for Covid-19 Makky Zamzami said that at first he felt that the handling of the bodies of deceased Covid-19 patients seemed excessive. Those who died were usually taken directly to the cemetery from the hospital, but officials have to wear level III personal protective equipment, which makes them look like astronauts. “It’s like dealing with Ebola patients in Africa,” he said.

His attitude soon changed and he understood the dangers of using the usual methods. According to Makky, after the body is bathed, covered in the shroud and placed in a coffin, it was safe for the community to bury it themselves. Only, Makky doubted that family members would not open the coffin. “If we do not bury it immediately, the coffin will definitely be opened for viewing, and that has the potential to infect others,” he said. 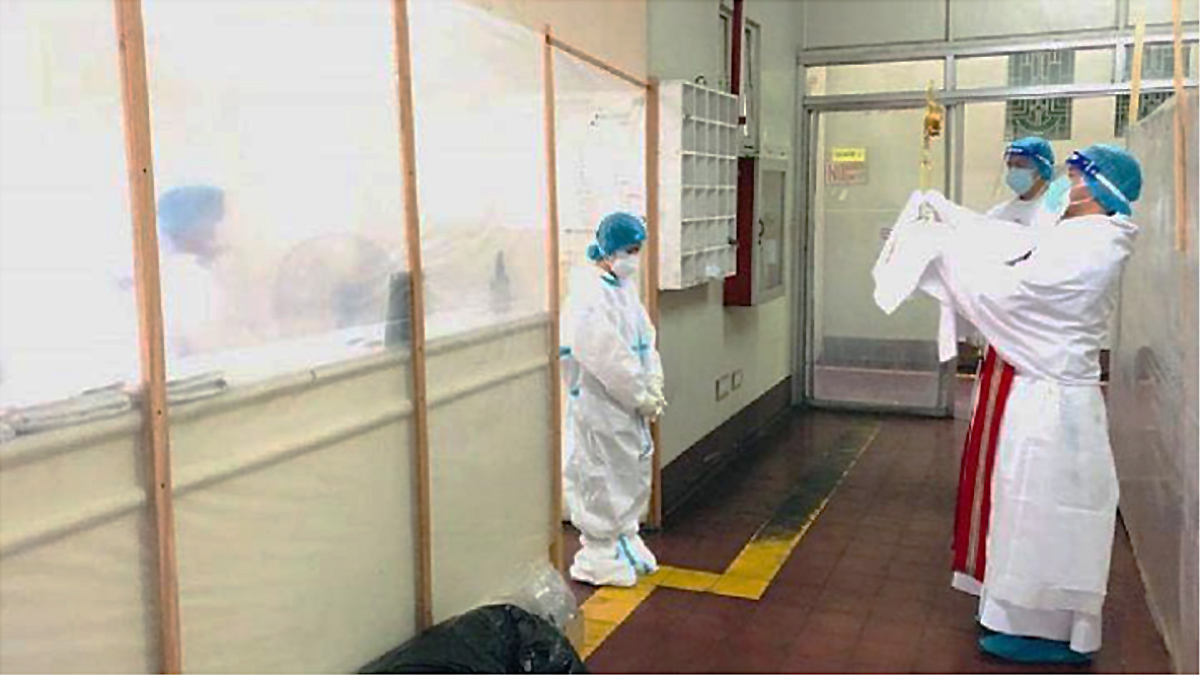 Chairman of the Muhammadiyah Covid-19 Command Center Corona Rintawan revealed that the community objected because they were not sure that the bodies were handled in accordance with Islamic tradition. At the Muhammadiyah Hospital in Lamongan, East Java, he decontaminated the body before washing it. The officials wear protective suits. After being bathed, the bodies are wrapped in six folds of plastic, then put in a coffin. “We facilitate families to be included in the process so that they see that the process is in accordance with the Islamic law,” he said.

Fear of infection has also changed the way people pay respect to family members or colleagues who have lost their lives because of the coronavirus. Anwar Abbas had such experience when his close colleague, Nadjamuddin Ramly, a former deputy secretary of the MUI and deputy chair of the Muhammadiyah Central Executive Council of the Environment, died of Covid-19 on February 21.

When he heard that Nadjamuddin died at the Muhammadiyah Hospital in Bandung, West Java, Anwar was confused. “There was a strong desire to come, but also to avoid it because of the pandemic.” Out of respect for his colleague, he finally performed salat gaib (prayer for the absent) from his home. He knew that the Islamic scholars had different opinions on this matter. Some say salat gaib was only performed by the Prophet Muhammad for the body of King An-Najasyi of Habasyah. But he did it anyway. “Covid has disrupted not only the economy, but also social life.”

The difficult situation of the pandemic has also made religious leaders try to find a common ground between religious law and public safety. The AstraZeneca vaccine issue is one example. As many as 113 million AstraZeneca vaccines will be imported this year to strengthen the vaccination program because Biotech’s Sinovac 140 million vaccines are not enough to form the herd immunity in the country. The total vaccine needed by Indonesia is 426 million doses.

The Food and Drug Monitoring Agency (BPOM) gave an emergency use permit (EUA) for the AstraZeneca vaccine on February 22. The MUI, in its ruling on March 16, stated that the law on using the AstraZeneca vaccine is haram or forbidden by Islamic law because its production uses porcine trypsin. However, the vaccine can still be given because there is a real threat if there is no vaccination. The East Java NU Regional Board issued a law allowing vaccination with AstraZeneca on March 10.

The application of religious principles by religious organizations has convinced the public regarding vaccinations. “The debate about whether or not vaccines should be used has ended after the views of institutions with authority, such as the MUI and Nahdlatul Ulama,” said Abdul Hamid Wahid, head of the Nurul Jadid Islamic Boarding School in Paiton, Probolinggo, East Java, which has 8,000 students.

Robikin Emhas said, in religious principles, things that were previously prohibited or forbidden could be done in an emergency situation. “If a person is in the middle of the forest and hasn’t eaten for days, then he finds a carcass, even a pig, he has a choice: to eat the pig and live or choose not to eat and risk his life. This is what constitutes an emergency.” 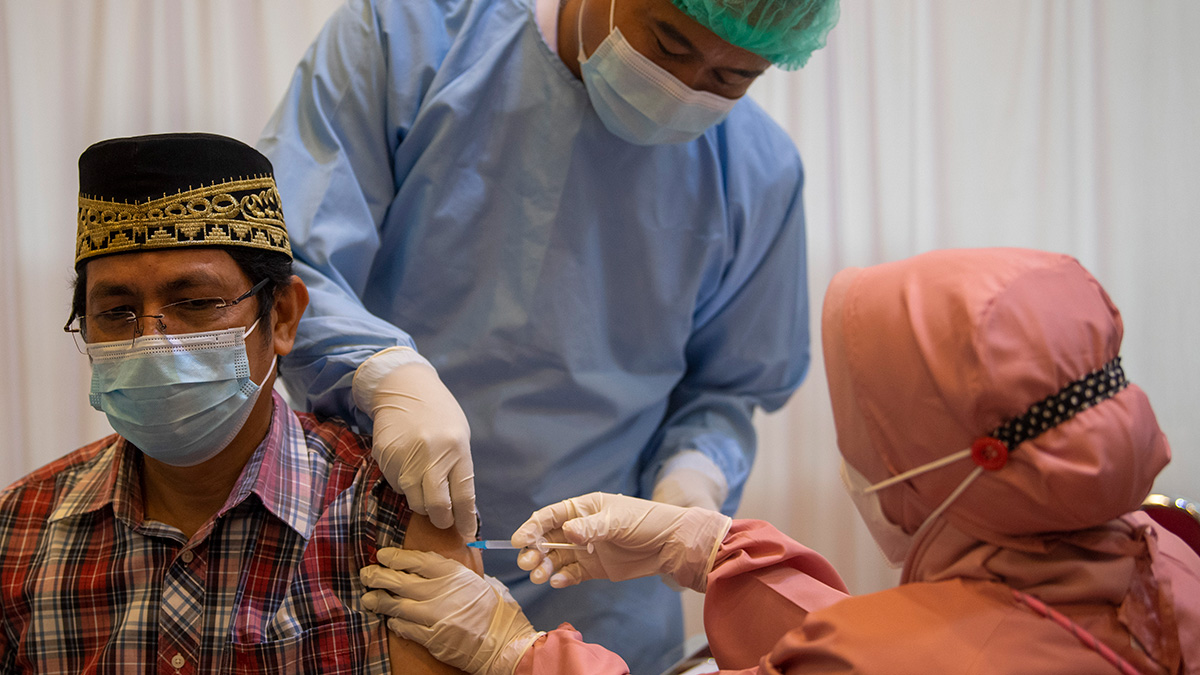 A total of 350 people received the first injection of the Covid-19 Sinovac vaccine during the vaccination program for religious leaders in Palembang, South Sumatra, March 23. Antara/Nova Wahyudi

Despite vaccination being an important effort in dealing with a pandemic, not everyone is initially willing to accept it. In the results of a survey by the Covid-19 Task Force with the World Health Organization (WHO) and the United Nations International Children’s Emergency Fund (UNICEF), conducted in September 2020, as many as 65 percent of respondents were willing to accept the vaccine, 27 percent were doubtful, and 8 percent refused. The reason for the rejection was a religious factor, including the matter of the halal, or permissible by the Islamic law, aspect. That is why the government is collaborating with religious figures, in addition to public figures, to convince the public.

Head of the Public Communication Division of the Covid-19 Task Force, Hery Trianto, said religious figures played an important role, among others, through their rulings. “With the issuance of the MUI fatwa that vaccines are holy and halal, it will be very helpful in public acceptance,” he said. At the start of the vaccination program using the Sinovac vaccine on January 13, religious leaders were among the first to be vaccinated, along with President Joko Widodo.

A lecturer at the faculty of law at Monash University, Australia, Nadirsyah Hosen, said that this pandemic has made people to introspect. “God is in our hearts, not only in places of worship, so that worship can be everywhere without violating the rules of the Islamic law,” said Nadirsyah. “This pandemic also confirms that religion is not rigid.”

Muslim scholar Komaruddin Hidayat said that congregations have decreased during the pandemic. “However, social worship is increasing. It is shown by more people doing good deeds, helping neighbors and the needy,” said the chancellor of the International Indonesian Islamic University on Saturday, March 27. The opportunity to worship in the form of learning is also more developed, effective and cheaper. “We can worship more solemnly, and be more diligent in reciting the Qur’an because we have much to pray for,” said Komaruddin.