The Balongan refinery exploded when the refurbishment project had just started. It became a new problem for Pertamina amidst other difficulties in running the refinery mega project.

THE last time Kardaya Warnika visited the Balongan Refinery Unit (RU) VI complex in Indramayu, West Java, was at the end of November 2020. He and eight members of the House of Representatives’ (DPR) Commission VII were there to inspect the refinery rejuvenation’s project development. It was exactly four months before four oil fuel tanks in the refinery complex owned by state oil and gas company Pertamina blew up in flames on the early hours of Monday, March 29.

The visit by DPR’s Energy Commission was a follow-up to a principal agreement between Pertamina and Taiwan’s China Petroleum Corporation (CPC), signed in June 2020. The two companies are collaborating to develop a petrochemical processing plant in Balongan. The work plan is part of the three phases of the Balongan Refinery Development Master Plan (RDMP) mega project, which is on the list of Indonesia’s national strategic projects. “The Balongan RDMP is, well, running, but not exactly moving,” said Kardaya, a Commission VII member from the Greater Indonesia Movement (Gerindra) Party Faction, on Thursday, April 1.

The fieldwork at the Balongan RDMP had not started when the Commission VII paid a visit to Indramayu at the end of last year. Pertamina only held the project declaration ceremony on February 22 this year, kick-starting the Balongan RDMP RU VI Phase-1 CDU Light Distillate Section Upgrading Project. The project constructor is a consortium of Rekayasa Industri, Rekayasa Engineering, and Enviromate Technology International.

The first stage project consists of works to increase the capacity of the Balongan RU VI light distillation section, from 125 metric barrels per stream day (MBSD) to 150 MBSD. The initial phase revitalization at Balongan would also raise the flexibility of the crude oil distillation unit (CDU), so that it could process heavy mix crude and lighter crude oil. In the records of Pertamina and the Commission VII, the first phase is estimated to cost up to US$100 million or around Rp1.4 trillion, the cheapest compared to the other two phases of the Balongan RDMP project.

As the four fuel oil tanks at the Balongan refinery were engulfed by flame for days since Monday, March 29, there were concerns over the project’s continuation. Luckily, the location of the refurbishment project is almost one kilometer away from where the four burning tanks are located. “The CDU revamp project is located far from the scene of the fire,” said Alex Dharma Balen, Managing Director of Rekayasa Industri, on April 2.

Even so, Alex told Tempo that, as authorities are investigating the cause of the fire, the restricted entry to the refinery could affect the project his team is working on. “It is likely that in the near future we can start immediately."

THE Balongan Refinery Development Master Plan is part of the Pertamina refinery megaproject. Similar development projects are being prepared in the Dumai Refinery Unit II in Riau; the Cilacap RU IV in Central Java; and the Balikpapan RU V in East Kalimantan. In addition to the development projects, there are plans to build new grass root refineries in Tuban in East Java and Bontang in East Kalimantan. All projects, targeted to be completed by 2027, need investments estimated totaling US$60 billion, or roughly Rp840 trillion.

These national strategic projects are claimed to able to close the gap between Pertamina refineries’ ability to process crude oil and the volume of domestic fuel oil demand. This whole time, Pertamina’s six refineries have only been able to process 1 million barrels of crude oil per day. From that amount, 705,000 barrels are domestic crude, and the rest imported. This is far from sufficient, as the domestic demand reaches up to 1.8 million barrels per day.

These numbers have not included the import of petrochemicals, which is quite high as well. As a result, oil and gas imports prevail to cause the deficit in trade and current account balance to widen. 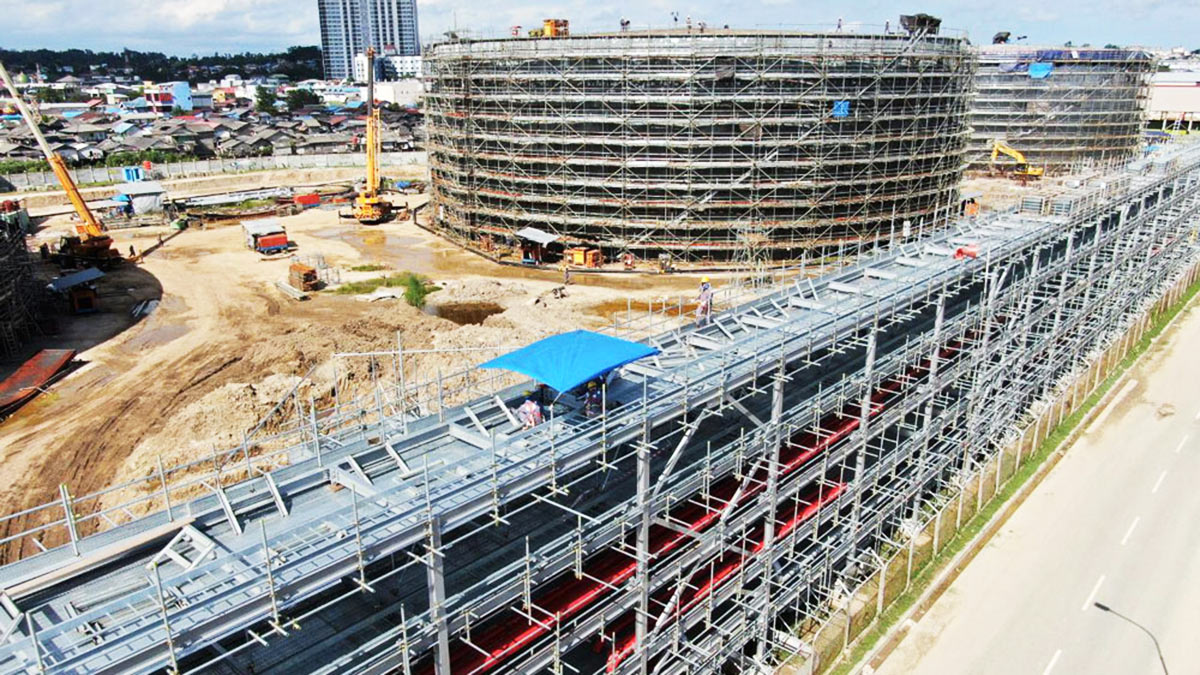 Pertamina estimated that the rejuvenation and construction of new facilities would increase the capacity of all refineries to 2 million barrels per day by 2025. In addition to reducing the imports of fuel and petrochemicals, the projects are expected to raise Pertamina fuel’s product standard from Euro 2 to Euro 5, which is friendlier to the environment.

However, funding hampered this ambitious project. According to Pertamina’s Finance Director Emma Sri Martini, refinery and petrochemical projects—assigned to Pertamina by the government for the 2020-2024 period—require US$18.02 billion investments. In the same period, Pertamina is also tasked to take on some 300 strategic projects, which need US$92 billion of investments. Most of the capital, US$64 billion of it, would be allocated to the upstream sector.

That is why, Pertamina continues to make calculations to decide which funding scheme is most efficient. “We expect capital financing, from commercial, multilateral, sovereign wealth funds, or other investors,” said Emma on March 4 during a web seminar with the University of Indonesia’s directorate of cooperation and the state-owned enterprises ministry.

During that seminar, Emma also offered a number of Pertamina projects to the recently formed Indonesia Investment Authority (INA), which manages the state’s wealth fund. Pertamina’s plan, Emma said, is to pay from its own pocket only 38 percent of the US$92 billion investment needed for 2020-2024.

Pertamina is also sourcing funds from several project financing and increasing the value of the company, including by offering its subsidiaries to the stock exchange. Additionally, 35 percent of the funds are expected to come from external sources. It is for this category Pertamina is eyeing the funds managed by INA. “The equity-based (funding) would be very big. This can certainly come from partnerships with INA and others,” said Emma.

According to Emma, Pertamina had mostly been relying on bank loans and global bonds as its sources of funding. In the future, she said, the company would be more aggressive in obtaining funds from equity and the private sector.

At Balongan, the second phase of the RDMP is estimated to require an investment of between US$1.5 billion to US$2 billion. The third phase is estimated to cost US$8 billion to build a petrochemical production refinery. For this phase, Pertamina hopes to be able to unite CPC (Taiwan) with Abu Dhabi National Oil Company or ADNOC (United Arab Emirates). Pertamina had first approached ADNOC as a prospective strategic investor.

But before the union plan could happen, four oil tanks at Balongan caught fire. Pertamina could only hope that the incident would not scare off potential investors. Earlier, Saudi Aramco had backed away from the Cilacap RDMP project. The Overseas Oil and Gas LLC from Oman also walked away from the grass root refinery project in Bontang, East Kalimantan.

Pertamina had not responded to Tempo’s questions about what would happen to the rejuvenation of the Balongan refinery in the aftermath of the fire incident. Since Thursday, April 1, Tempo had been trying to contact and send questions to Pertamina International Refinery’s Corporate Secretary for Subholding Refining and Petrochemicals, Ifki Sukarya, but he had yet to respond.