The ban to broadcast LGBT content is considered to be discriminative. The big hand of the Indonesia Ulema Council (MUI) is involved.

JTV has two ludruk shows, titled Rujak Suroboyo and Ndoro Bei. The station could still put on both shows during Ramadan last year. Rokhim stated disappointment towards KPI’s stance, whose circular showed their ignorance regarding art and culture. To his view, the prohibition is direct interference towards television creativity. 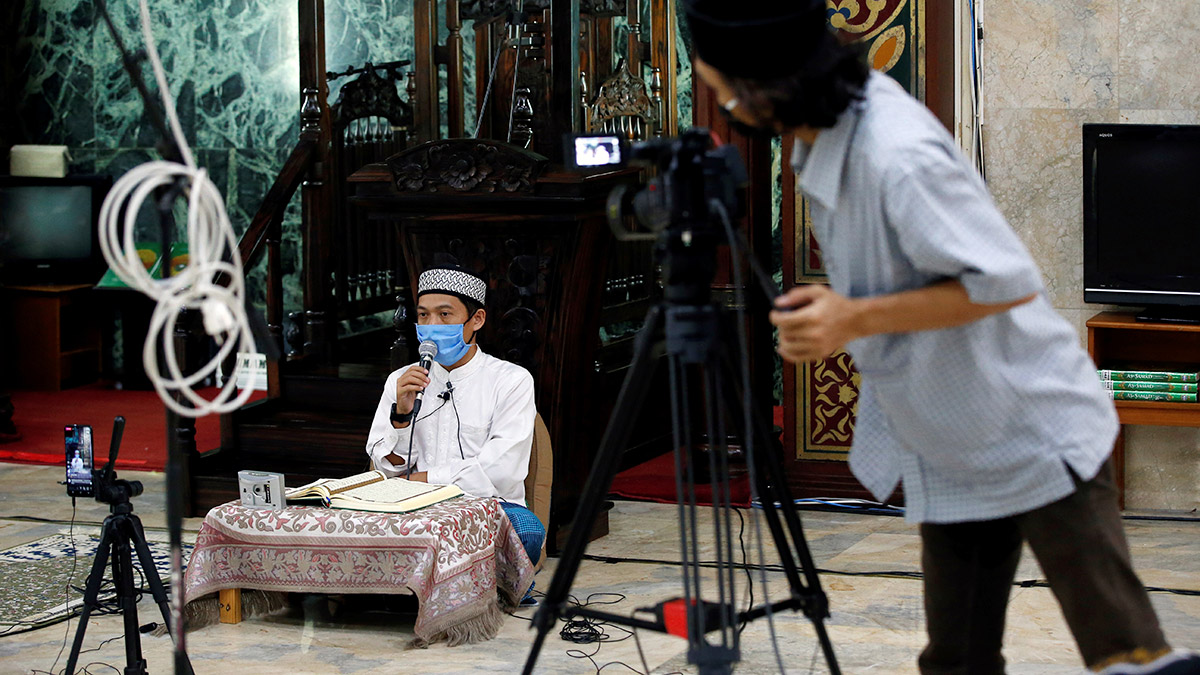 Bambang Suprianto, an imam wearing a protective mask, reads the Qur’an while streaming inside Sunda Kelapa mosque, closed as the government imposed large-scale restrictions to prevent the spread of Covid-19 during the fasting month of Ramadan, in Jakarta, April last year. Reuters/Willy Kurniawan

In Malang, East Java, Chair of the Kuwalisi Kendo Kenceng Ludruk Community, Sutak Wardiono, also stated dismay regarding the KPI circular which limits transvestites in their expression. Ludruk, an ancient art form of East Java, is often performed on television. Other art forms, such as reog from Ponogoro, also have a gemblak character, wherein a young boy dancer moves with grace and effeminate charm. East Java also has gandrung, a singing art form sung by males in high-pitched ‘female’ voice.

According to Sutak, his association has portrayals of female characters performed by men. They often perform at the Surabaya Art Center and in village and suburban centers. Sutak is concerned that the KPI issued their circular without regard towards local wisdom. “The KPI’s perspective in non-comprehensive,” he said.

In Yogyakarta, the Javanese-language theater group, Sedhut Senut, is also on tenterhooks regarding the KPI circular. One of the theater group’s founders, Elyandra Widharta, said Sedhut Senut also has a transvestite in their troupe. Transvestites are usually the main pull for audiences. Elyandra is worried the circular will limit Sedhut Senut’s chances to appear on radio and television. Said Elyandra, this would obviously have dire impact on their income.

KPI Institutional Affairs Coordinator, Irsal Ambia, said the circular was merely aimed at safeguarding religious and decency norms, and ensuring children remain protected. “The regulation is also aimed at maintaining the sobriety of Muslims in their observation of the fasting month,” Irsal told Tempo on March 31.

Irsal explained the prohibited content in question are those promoting LGBT as a norm and a lifestyle. Males dressing up as females are included in the ban. Yet, Irsal said, programs such as ludruk remain allowed. “These are cultural shows.” The same applies to news coverage of demonstrations in support of LGBT rights and against harassment towards the minority groupings.

Said Irsal, the circular was an extension of the KPI regulation issued in 2016. The KPI then prohibited content with men acting as, dressing up as, and pretending to be women. As before, the KPI this time was in coordination with the Indonesian Ulema Council (MUI) and the religion ministry when they compiled the circular. The draft letter was discussed at length for five days before it was signed off by KPI Chair Agung Suprio. Irsal said the MUI was invited because it has the authority to determine propagation content.

MUI Chair Cholil Nafis verified his organization provided KPI with input during several online meetings. One of the items discussed was banning the promotion of LGBT sensibilities. The MUI was also against the broadcast of men acting as women and vice versa. “No such thing exists in Islamic teachings,” said Cholil.

The Association of Indonesian National Television was also roped in for the compilation of the KPI draft letter. Association member, Deddy Risnanto, said during the online meeting, they also discussed banning portrayals of women hugging or kissing other women. Said Deddy, discussion on the ban towards LGBT sensibilities had already been discussed since last year in a series of limited discussions. “We are in accord with the ban on broadcasting LGBT content,” he said.

The KPI circular has raised protest from several parties. General Chair of the Alliance of Independent Journalists (AJI) Sasmito Madrim regards the circular as having possibility for multiple interpretations and the potential to impede the media from coverage of minority rights, including LGBT groupings. This obligation is defined by KPI Regulation No. 01/P/KPI/03/2012 regarding broadcasting action guidelines. Article 15b obligates broadcasting entities to pay attention to and protect the rights and interests of persons and/or groupings of specific sexual orientation and gender identities. “We are urging the KPI to delete the point regarding the LGBT in their circular,” said Sasmito.

“Coverage on transvestites from a journalistic point of view, respect towards transvestites in their observance of religion, and respect to human rights is necessary for the public.”

Former chair of Studies at the MUI, Siti Musdah Mulia, also expressed her concerns regarding the circular. According to her, the KPI as a state institution has no need to refer to the MUI when laying down policy. The MUI as a community organization, said Musdah, does not represent the entire Muslim population. Musdah as General Chair of the Indonesia Conference on Religion and Peace Foundation deems it sufficient for the KPI to create regulations based on the Broadcasting Law.

Voices of protest have also arisen from parties within the KPI itself. KPI Deputy Chair of Yogyakarta Province, Agnes Dwirusjiyati, stated that the Yogyakarta KPI is refusing to circulate the KPI letter to the broadcasting organizations in the province. Agnes said she received a lot of inquiries from broadcasting organizations around Yogyakarta. According to Agnes, they were worried the circular would impede the coverage of the Al Fatah Transvestite Pesantren (Islamic learning center) in Kotagede, Yogyakarta. The school is run by a kiai (Muslim scholar) of the Nahdlatul Ulama organization and a researcher at the Sunan Kalijaga Islamic State University in Yogyakarta, and during Ramadan is active in conducting routine events.

Agnes voiced her concern in the KPI chat group, consisting KPI members from regions throughout Indonesia. Yet, certain KPI members from other regions have suggested the central KPI in Jakarta ban any coverage regarding the transvestite pesantren. “Coverage on transvestites from a journalistic point of view, respect towards transvestites in their observance of religion, and respect to human rights is necessary for the public,” said Agnes.

Bali Regional KPI Coordinator for Content Supervision I Wayan Sudiarsa also raised concern about the circular’s behests. He requested that the central KPI pays attention to the protests of AJI and other civil groups. “The protests against the circular’s contents contain strong reasoning,” said Sudiarsa.

Irsal Ambia of the KPI admitted to receiving many voices of protest from media and journalist organizations and human rights activist. Despite this, it appears the KPI will not revise the regulation. “We are accommodating all inputs and protests regarding the matter,” said Irsal.