The Bank Indonesia Liquidity Assitance (BLBI) Asset Recovery Task Force found at least a dozen problems when identifying assets belonging to 48 obligors. They plan to hunt down these assets all the way abroad.

SEVERAL days after its establishment on Tuesday, April 6, the Bank Indonesia Liquidity Assistance (BLBI) Asset Recovery Task Force presented its findings. Before the Coordinating Minister for Political, Legal and Security Affairs Mohammad Mahfud Md. and a number of other officials, the task force—led by the Finance Ministry’s Director-General of State Assets, Rionald Silaban—revealed there was Rp110.54 trillion of potential collectable receivables. “In 1998, President BJ Habibie disbursed funds to 48 obligors. Some have been settled, some haven’t,” said Mahfud on Thursday, April 17.

According to Mahfud, after 10 days of identifying each asset submitted by debtors, the task force found at least a dozen problems. For example, there are goods or assets that have been pledged as collateral to the Indonesian Bank Restructuring Agency (IBRA), but were then sued by other parties. The court ruled in favor of the lawsuit, because the assets pledged are considered as belonging to someone else. There are also assets that have been sold despite being pledged as collateral to IBRA. And there is an asset that is apparently owned by three people, with the other owners refusing to have it pledged as collateral.

President Joko Widodo formed the BLBI task force through Presidential Decree No. 6/2021. The team is tasked to handle, resolve, and recover state rights in the BLBI funds. The task force also has the authority to propose legal remedies or other efforts both in Indonesia and overseas. Set to work until 2023, the task force has a steering committee consisting of a number of ministers in the political, economic and law enforcement departments. 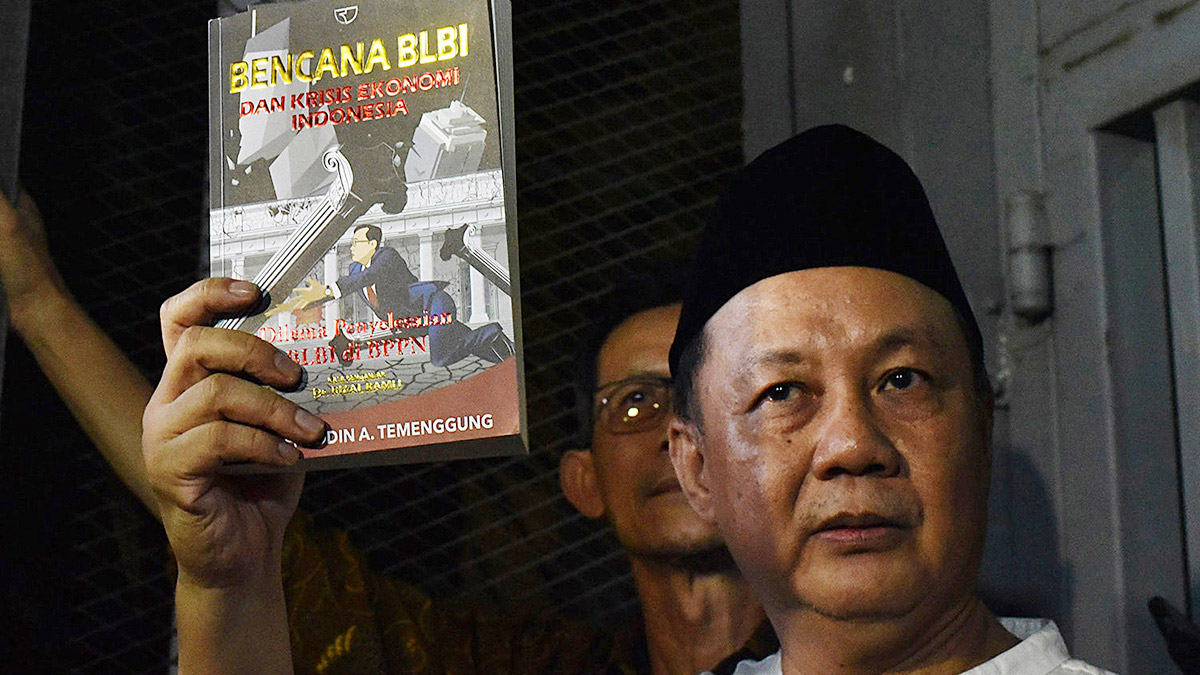 According to the task force’ calculation, the accounts receivable with potentials to be collected comprise of six kinds. Some are in the form of properties, credits, foreign money accounts, stocks, as well as assets that have moved abroad. Justice and Human Rights Minister Yasonna Hamonangan Laoly said they can hunt for these assets overseas with help from Interpol, through a mutual legal assistance agreement. Yasonna said his team will map out the priority scale of the claims until 2023. “We can do it according to the target,” he said.

The government disbursed Rp144.5 trillion of BLBI funds to 48 banks affected by the 1997-1998 financial crisis. The government then formed IBRA, tasked to collect all the funds. Outside of court, there were three schemes to solve the BLBI case: using a master settlement and acquisition agreement (MSAA), master refinancing and notes issuance (MRNIA), and a debt acknowledgment deed (APU).

President Megawati Soekarnoputri at the time issued a presidential instruction as the basis for the issuance of a certificate of settlement (SKL) for obligors deemed cooperative and had settled the payment of the debt. From 2003 to 2004, IBRA issued SKLs to 20 debtors, five of whom were top businessmen who took the MSAA scheme. They are Anthoni Salim, owner of Bank Central Asia; Mohammad Hasan (Bank Umum Nasional); Sjamsul Nursalim (Bank Dagang Nasional Indonesia/BDNI); Sudwikatmono, owner of Bank Surya; and Ibrahim Risjad (Bank Risjad Salim Internasional). 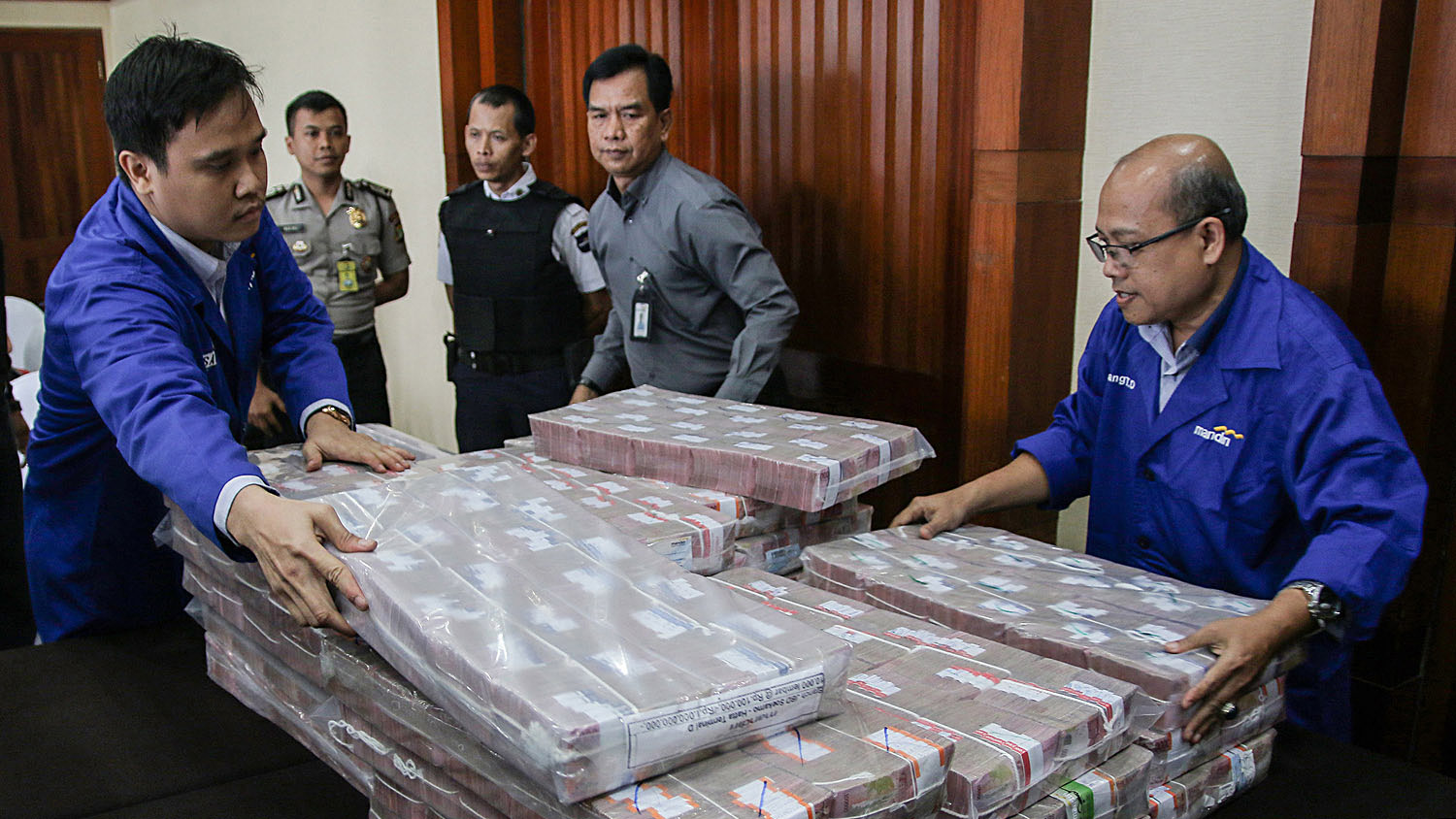 Compensation money of the BLBI corruption convict Samadikun Hartono to be handed over to the High Prosecutor’s Office at the Bank Mandiri building, Jakarta, May 2018. Tempo/Muhammad Hidayat

Later on, the Corruption Eradication Commission (KPK) found indications of underpayment in Sjamsul Nursalim’s SKL. Sjamsul received funds of Rp47.2 trillion. The chairman of IBRA at that time, Syafruddin Arsyad Temenggung, issued an SKL for Sjamsul in April 2004 because it was believed that he had paid off the remaining debt of Rp4.8 trillion. However, the KPK suspects Sjamsul had only paid Rp1 trillion. In this case, the KPK named Syafruddin as a suspect, followed by Sjamsul Nursalim and his wife, Itjih.

The Jakarta Corruption Court sentenced Syafruddin with 13 years in prison and a fine of Rp700 million. The Jakarta High Court increased the sentence to 15 years of imprisonment and a Rp1-billion fine. However, he was freed by an appeal decision at the Supreme Court (MA) on July 9, 2019. The Supreme Court ruled that there was no criminal element in the SKL issuance for BDNI. In June 2020, the Supreme Court rejected a judicial review proposed by KPK prosecutors.

This ruling became one of the bases for the KPK to issue an investigation termination warrant (SP3) on Sjamsul and Itjih on April 1, five days before the task force’ establishment. “The termination of investigation is part of the legal certainty,” said KPK Deputy Chairman Alexander Marwata.

AFTER the Supreme Court rejected the judicial review filed by the KPK, Coordinating Minister for Political, Legal and Security Affairs Mahfud Md. and Finance Minister Sri Mulyani Indrawati studied the verdict. They agreed to follow the Supreme Court decision, which stated that the BLBI case was a civil domain. Mahfud said that he had been considering this civil effort since July 2019, after the Supreme Court ruled to release Syafruddin Arsyad Temenggung.

The decision is reinforced by the KPK’s issuance of the investigation termination warrant for Sjamsul Nursalim and Itjih. When he met with President Joko Widodo, Mahfud said that the government still has the opportunity to pursue the assets of BLBI debtors through civil efforts. Mahfud then proposed to form a task force with members from a number of state institutions, such as the finance ministry, the police and the prosecutor’s office. 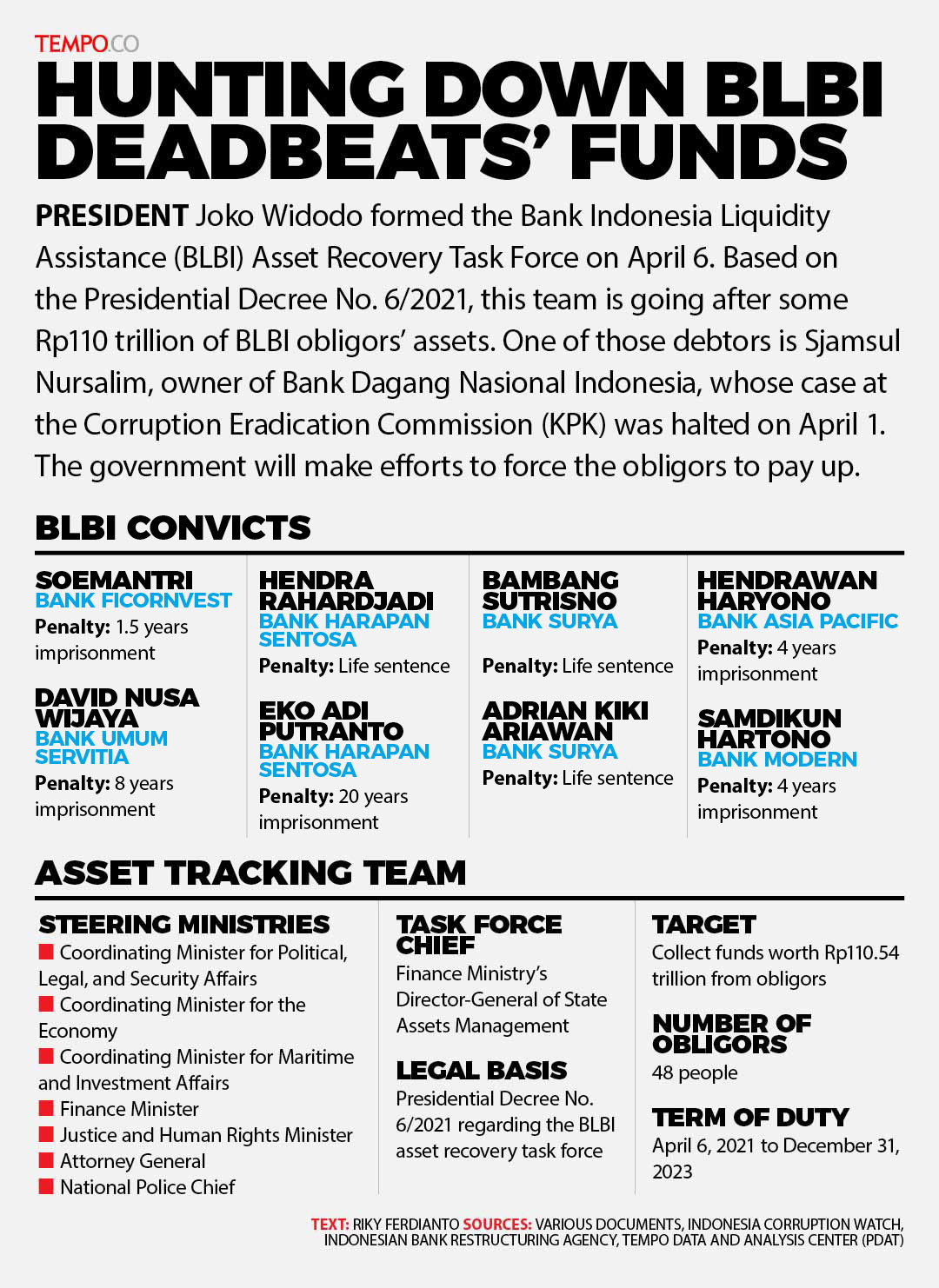 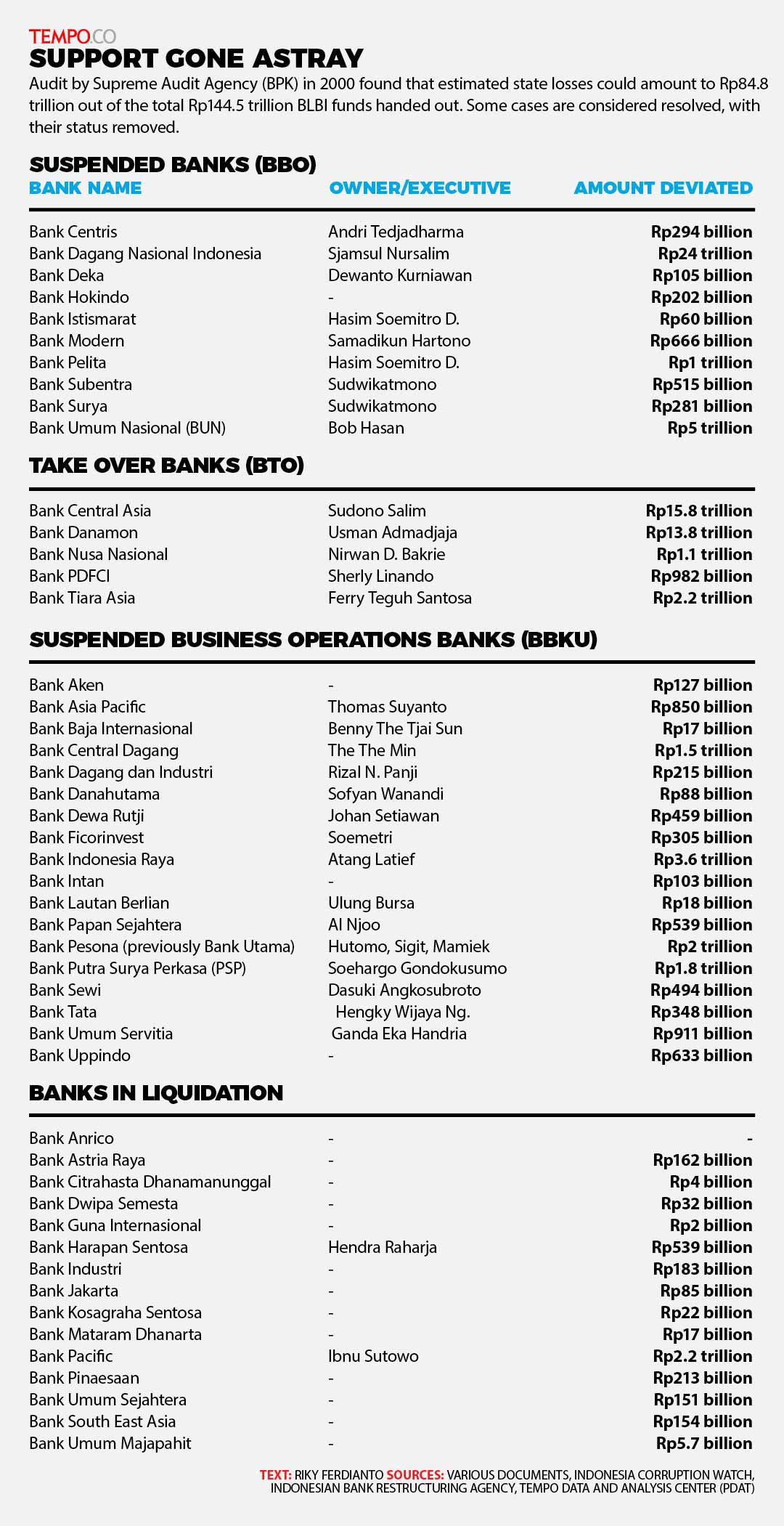 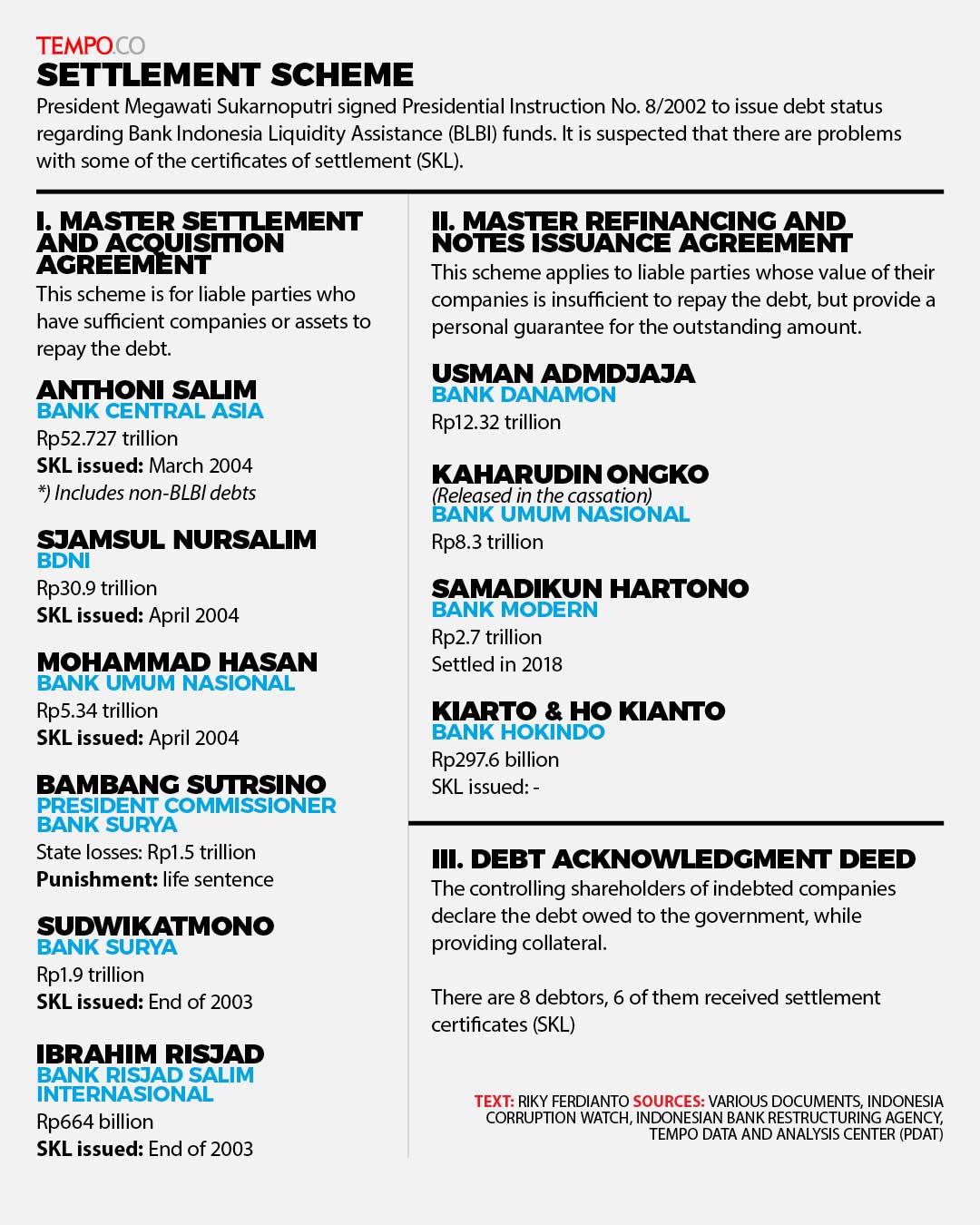 In addition Sjamsul, the BLBI Asset Recovery Task Force also investigated 48 obligors who received assistance funds in 1998. Claims on Sjamsul were among the largest. In addition to the BDNI, the task force will collect the BLBI funds disbursed to Bank Dewa Rutji, also owned by Sjamsul, to the tune of Rp470 billion. “The bigger one is at BDNI, and we are calculating it,” said Mahfud.

Sjamsul’s remaining debt is estimated at Rp3.8 trillion. A law enforcer with knowledge of the case said that Sjamsul had pledged his assets. One of those is Gadjah Tunggal, a company an estimated value of Rp7 trillion. But during the auction by IBRA, the asset was only sold for Rp2.1 trillion. The law enforcer said that there are suspicions that the bid winner was a company affiliated with Sjamsul. He said that this could become a new case of either civil or criminal. 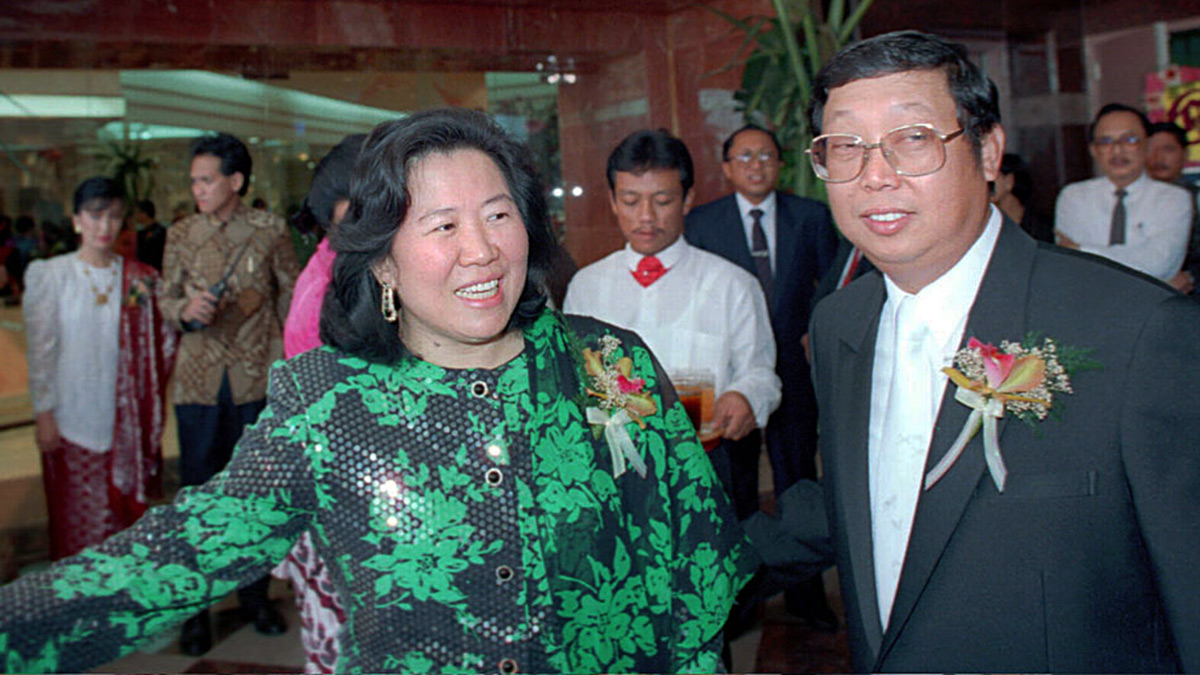 Mahfud said that he knows of this information. He promised to follow it up. He said that the job of the task force is not easy, because the BLBI case is an unfinished work from something that happened 23 years ago. “The main thing is for the obligors to pay. If they won’t pay, we will come after them,” he said. Mahfud hopes that obligors, including Sjamsul, will pay the debt voluntarily. If they refuse, said Mahfud, the task force will take legal actions. “In civil law, there is [a matter of] repossession/confiscation. Failure to fulfill the obligation can lead to criminal domain.”

Sjamsul Nursalim and Itjih’s lawyer Otto Hasibuan questioned the government’s plan to collect the BLBI debt. “We believe that it had been settled by the issuance of SKL for the remaining debts owed by BDNI,” he said. So far, said Otto, the government had never collected BLBI debts from his clients. He claimed to have no knowledge of the BLBI fund disbursed to Bank Dewa Rutji.

THE formation of the BLBI Asset Recovery Task Force did not involve the KPK. KPK Deputy Chair Nurul Ghufron said the agency has no authority to take civil efforts. “The KPK has six tasks: to prevent, monitor, supervise, coordinate, take action, and execute,” said Ghufron. The KPK, however, is ready to assist the task force if needed, he said.

The KPK’s final effort is to submit a request for a judicial review over the Supreme Court’s ruling, which acquitted Syafruddin Arsyad Temenggung. In the decision, the three-panel member of judges—Salman Luthan, Askin, and Syamsul Rakan Chaniago—had differing opinions. Salman, the presiding judge, believed that the High Court made the right verdict to increase Syafruddin’s sentence. Meanwhile, Askin considered the case an administrative violation, and Syamsul was of the opinion that the case was a civil matter.

In the judicial review note, the KPK mentioned their suspicion of serious ethics violation by cassation judge Syamsul Rakan Chaniago, because he had met Ahmad Yani, Syafruddin’s attorney. The meeting took place a week before the acquittal verdict. The call data records owned by the KPK showed that Syamsul Rakan and Ahmad Yani had communicated several times, including a one-hour phone call prior to meeting in a cafe. Security camera footage also showed the two men meeting at the café for 27 minutes.

Syamsul claimed that the meeting was not about Syafruddin’s case, and they did not discuss it. “We were only having coffee. We have known each other for a long time after all,” he said. Meanwhile, Ahmad Yani said that he accidentally ran into Syamsul Rakan at Café Segafredo in Plaza Indonesia, Central Jakarta. “I might have met him. I met a lot of people there,” said Ahmad Yani. The Supreme Court’s Supervisory Agency then sentenced Syamsul Rakan, barring him from handling cases for six months.