Local communities protested against Aneka Tambang for polluting the mangrove area in Tanjung Moronopo, East Halmahera North Maluku, with waste from its mining operation. The mine is changing both the waters and the lives of fishermen.

SAHBUDIN Abubakar thinks that the mangrove area in Tanjung Moronopo, Buli subdistrict, East Halmahera, North Maluku, is not fine. The mangrove there were planted since 16 years ago, but it appears as if they fail to flourish. He is convinced this is due to the nickel mining operation in the region.

Mining sludge flowing into the coast and inundating the mangrove area is nothing new. But what occurred in early April was different. “The mud this time is the worst. Nearly the entire stretch of the coastline in Tanjung Moronopo is covered in mud deposit. Sea water turns yellow. Freshly planted Mangroves are damaged,” said Sahbudin, a youth from Maba Pura village, on Monday, April 26.

The scene prompted dozens of local residents from various areas around Tanjung Moronopo to come by to the polluted mangrove area on April 7. They intended to protest the large amount of sludge being dumped there. Some of them remained on the shore. Others, including Sahbudin, went down to measure the depth of the mud deposit, which could reach as high as an adult’s chest.

According to Sahbudin, the mud arriving along the coast of Moronopo originates from the nickel mining operation by two subcontractors of Aneka Tambang (Antam), which owns a sizeable nickel mining concession in East Halmahera. Both companies are contractors for mining operation management service, including overburden removal, transshipment, and nickel ore transport in Moronopo. 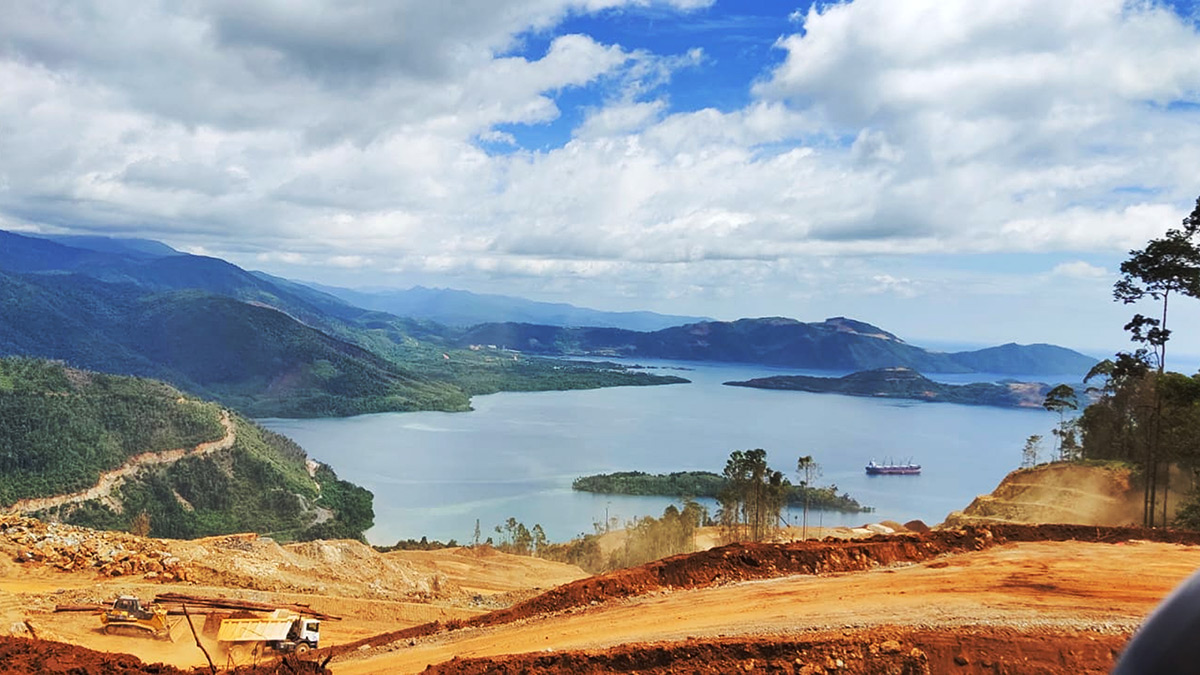 North Maluku Environment Agency Chief Fachruddin Tukuboya said the mud sediment appears on the coast of Moronopo because the mining companies’ containment wall is damaged. “For the mean time, we are still waiting for the verification result. We will also re-deploy the second team to assess the damage inflicted upon the shoreline,” he said on April 28.

Antam, as expressed by Senior Vice President Corporate Secretary Yulan Kustiyan, is concerned over the emergence of the sediment deposit and is committed to help the government solve the problem. “Sedimentation occurred due to the extreme rainfall of 982.1 millimeter in March 2021, a 500-percent surge over the average number during the past year,” he said on May 7. The high rainfall increased the flow of water on the surface runoff of the Moronopo mine.

When asked about the damaged containment wall, Yulan explained that Antam has a prevention procedure and performs mitigation by building erosion and mine sedimentation control measures. “Including drainage construction, check dam, and others,” he said.

Previously, Antam has planted around 30,000 mangrove plants to resist erosion and abrasion. The company also coordinates with local communities to support their effort to restore the coastal area, including by planting and maintaining mangrove in areas affected by the sedimentation.

MINING activities, along with land conversion for fishery or infrastructure constructions, are some of the factors that contribute to the damage to mangrove areas in Indonesia. Based on data from the environment and forestry ministry, as of this year, there are 3.31 million hectares of mangrove areas spread across the country. The largest is in Papua, measuring 1.4 million hectares. Of that number, 600,000 hectares are in critical condition.

Sahbudin Abubakar said the area along the coastline of Moronopo stretches for 700 meters with a total area of 71,000 square meters. The mangrove plants there are from the Rhizophora mucronata, Rhizophora pilosa, and Rhizophora apiculata species. The trees may grow up to 27 meters tall, with trunks 70 centimeters in diameter. This type of mangrove is often planted to hold off the flow of ground materials into the sea. 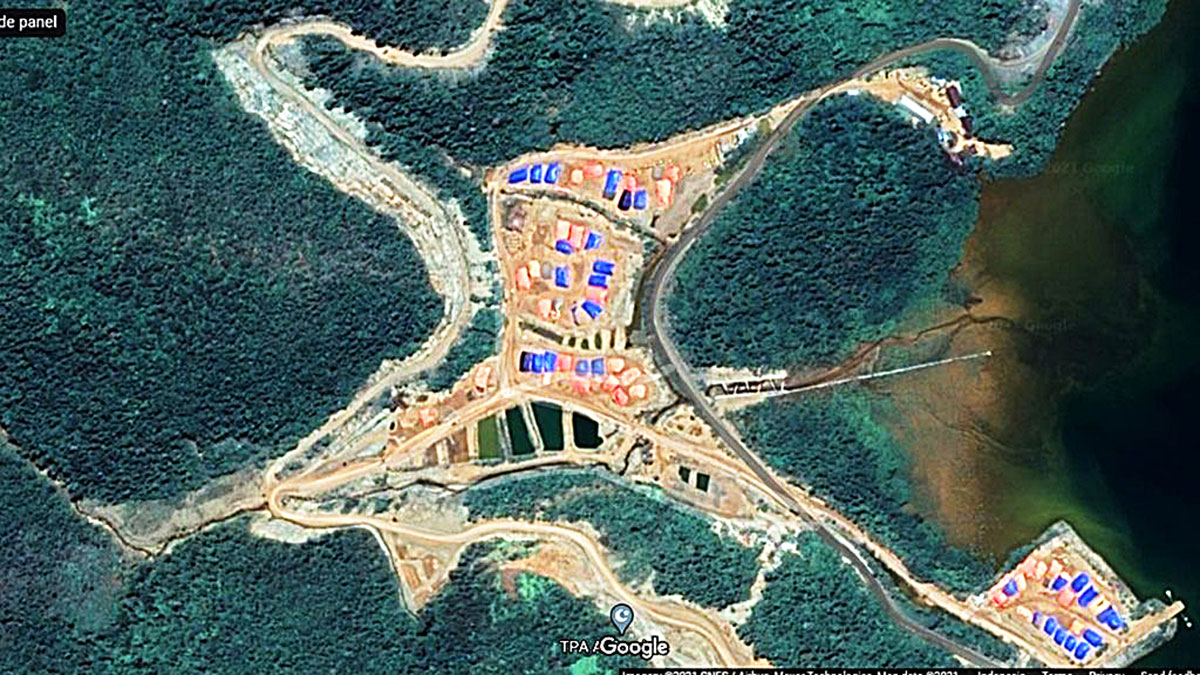 Ruh Marsaoly, a 32-years-old indigenous youth from Maba Pura, said that mud contamination had occurred to the mangroves before. In 2012, the coastline in Maba Pura village was covered in mud sedimentation from the nickel mine, reducing the amount of fish caught by fishermen. Back then, locals also organized a protest, but they received no response.

Marsaoly has been seeing numerous changes to the locals’ economic life due to the mining activity. Before the mining, hundreds of fishermen in East Halmahera lived off the Buli Bay. Many of them earned their living by catching small pelagic fish, anchovies, and carps from the waters off Buli. Everything took a drastic turn when the mine started operating intensively more than 10 years ago.

According to Marsaoly, now many fishermen need to go farther into the sea because fish have become hard to find in the Buli Bay. Fishing nets also require routine cleaning and washing because they often get dirty with mud. “This is a hard time to be a fisherman in Buli,” said Marsaoly.

Sahbudin said fishermen used to catch anchovies from fishing platforms. This changed with the arrival of the mining. “Because anchovies are no longer easy to come by,” said Sahbudin, who is the Head of East Halmahera Nusantara Indigenous People Alliance (AMAN). He added that some locals changed their profession into workers at the mining company.

Other than having to venture farther out of the bay, fishermen are often disturbed by large nickel transport vessels operated by the mining company. “The freighters are very much a nuisance for the fishermen trying to catch fish around the Pakal Island,” said Sahbudin. He hopes that there will be a zoning arrangement between the fishing area and shipping route.

The impact wrought by mining to the waters and the fishermen’s catch was studied by Deni Sarianto, together with Domu Simbolon and Budi Wiryawan. Their report was published in a journal by the Bogor Agricultural University, West Java, in 2016. The study concluded that nickel mining is strongly correlated with the degradation in water quality and decreasing size of fish, particularly those caught from fishing platforms. 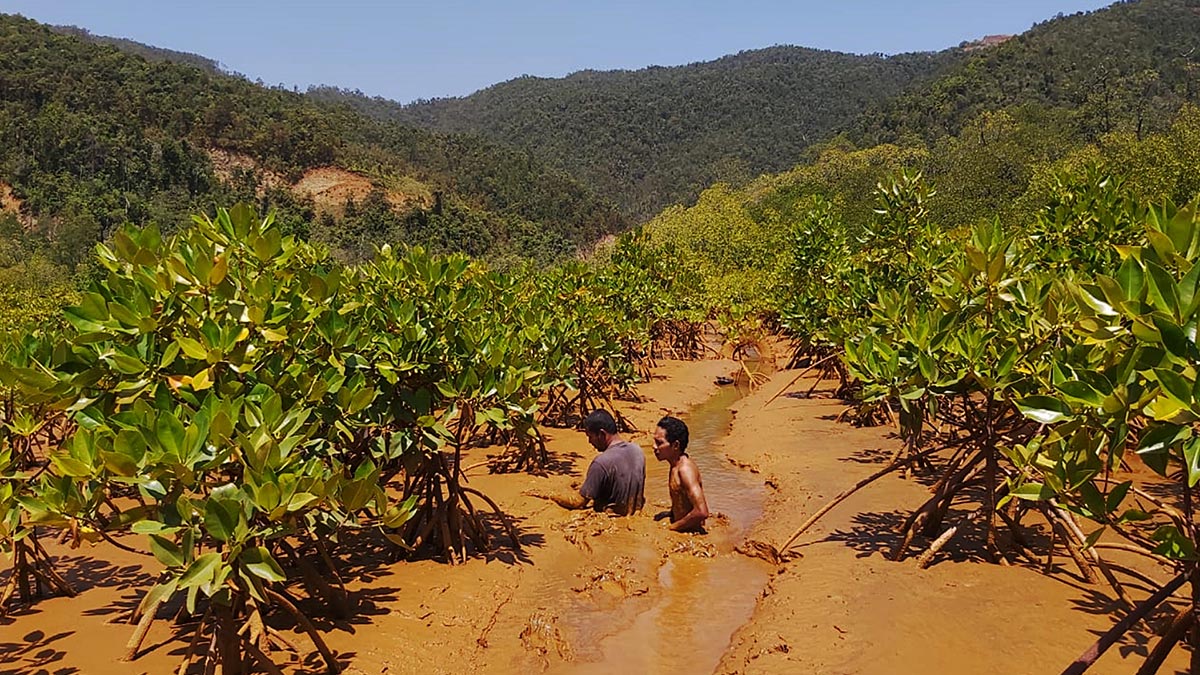 According to Deni, nickel mining in East Halmahera is done in open fields, softening the soil. When the rain falls, the soft soil falls apart and goes with the flow of water towards the coastline. In turn, this affects the quality of water. “When their environment changes, animals run away in order to stay alive. The pelagic fish, for example, are able to move out. But those that are unable to do so, like shellfish, are facing the consequences directly,” said Deni, who is an instructor at the Pariaman Marine and Fishery Polytechnic, West Sumatra, on May 6.

Regarding the impact of mining towards locals, Yulan Kustiyan said that Antam has fulfilled its obligations to the local communities around the area of operation. He quoted an academic research by Khairun University, Ternate, which said that the sedimentation along the coast of Moronopo is temporary, and that it will not disrupt the fishermen, He added that, in accordance with the East Halmahera Spatial Plan of 2010 to 2029, Moronopo is a designated mining and economic growth area.

The Mining Advocacy Network has several notes on the poorly practiced nickel mining activity in East Halmahera. One of these is that the mining often disregards the principle of ecological balance. Mining done by dismantling the forest cover frequently damages the environment in land areas, and also the sea where fishermen get their catch.

Nickel mining also threatens the smaller islands in East Halmahera. At least three small islands in Buli have suffered damages due to open mining of nickel. The other problem is that conflicts often erupt between companies and locals because of the numerous living spaces, such as plantation area, farmland, and food source, that are vanishing. “The government should evaluate mining operations like this one,” said Melky Nahar, Campaign Manager of the Mining Advocacy Network