As countries impose sanctions on military officials involved in the coup in Myanmar, ASEAN remains divided in condemnation. Indonesia has a key role to play.

KYAW Moe Tun seemed emotional and stuttered his words as he finished his sentence. The Myanmar Ambassador to the United Nations pleaded to the international community to put an end to the military coup in his country. In front of 193 of the UN General Assembly in New York, United States on Friday, February 26, he pleaded to the entire world for help in stopping the brutal acts of the military and police towards the Myanmar people.

At the end of his speech, Moe Tun raised a three finger salute, a symbolic gesture used by Myanmar protesters rebelling against the military coup. "We need further strongest possible action from the international community to immediately end the military coup, to stop oppressing the innocent people, to return the state power to the people and to restore the democracy,” said Moe Tun, who was greeted with applause and praise from his colleagues in the assembly room.

Moe Tun’s speech marks a new chapter in the political struggle against Myanmar’s military junta. The country’s government is currently under the control of the State Administration Council (SAC) led by Gen. Min Aung Hlaing. At the UN, Moe Tun identified himself as the representative of the civilian government based on the results of the November 2020 general election, which was won by the National League for Democracy Party (NLD) chaired by Aung Sang Suu Kyi.

Since the coup, the military has detained Suu Kyi, President Win Myint, as well as a number of high-ranking party and state officials. The army also continues to suppress protests, using force and firearms. Furthermore, they enforced a curfew and shut off Internet access. The military also silenced mass media and journalists. At least four people were killed, more than 100 injured, and at least 500 were detained by soldiers during the protests.

The UN Special Envoy on Myanmar, Christine Schraner Burgener, has warned that no country should acknowledge, let alone legitimize, the Myanmar military junta. She also called on ‘influential’ countries to urge the military to allow independent monitors to see conditions in the country. “Regrettably, the current regime has so far asked me to postpone any visit,” said Burgener, as reported by Reuters.

Several countries are trying to suppress and impose sanctions on the junta. Joe Biden, President of the United States, issued an executive order containing sanctions against those deemed involved in the coup. He urged the generals to return power to the civilian leaders and free them.

Washington also closed off the junta’s access to US$1 billion in Myanmar government funds held in the United States. The US has also imposed an export ban and frozen assets believed can be taken by the junta. “Even so, we are still providing support to health services, civic groups, and other areas that can help the people of Myanmar,” said Biden.

Canada has sanctioned nine Myanmar military officials through the Special Economic Regulation, which adds to the list of 54 people who have been sanctioned for their links to human rights abuses. “Canada stands with the people of Myanmar in their quest for democracy and human rights,” said Canadian Foreign Minister Marc Garneau in a statement. 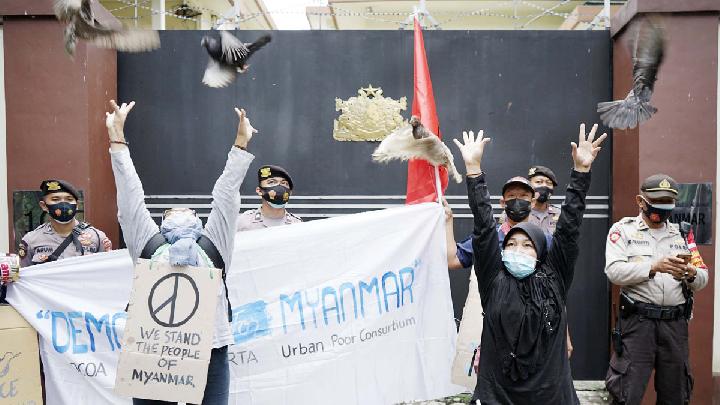 A crowd from the Jakarta Urban Poor Consortium protesting the coup carried out by the military in Myanmar, in front of the Myanmar Embassy in Jakarta, February 5. Tempo/Muhammad Hidayat

The G7 state member, namely the US, Britain, Italy, Japan, Germany, Canada, and France, as well as representatives of the European Union also condemned the military coup and the violence that the junta carried out against demonstrators. In a statement released on February 24, they urged the Myanmar military and police to respect human rights and international law. “The use of live ammunition against unarmed people is unacceptable. Anyone responding to peaceful protest must be held to account,” they said.

The sanctions given are a travel ban to the United Kingdom and prohibiting institutions from handling their funds or economic resources in the UK. “My message to the people of Myanmar is simple: Britain is working with our international partners to support your right to democracy and freedom of expression,” said UK Foreign Secretary Dominic Raab.

Protestors are accusing China, which has close business ties with Myanmar, of supporting the coup. Some analysts, as reported by Foreign Policy, suspect that China played a role in helping the military silence protestors and secretly supply arms. The Chinese Ambassador to Myanmar, Chen Hai, denied this. According to Chen, as reported by Channel News Asia, China does not want to see the current political situation. He said China is trying to maintain good relations with Myanmar’s military and civilian government. The Chinese government has not issued a more serious statement other than stressing the importance of maintaining stability in Myanmar. Nonetheless, the Chinese delegation at the UN agreed to a Security Council statement calling for detained political leaders and activists to be released immediately.

Meanwhile, Myanmar’s neighbors at the Association of Southeast Asian Nations (ASEAN) have yet to unite their voices in condemning the coup. They are bound by the ASEAN principles of not to interfere in the domestic affairs of their member countries. The Philippines, Cambodia and Thailand, which have previously experienced a coup, considered what is happening in Myanmar as a domestic problem. Indonesia, Singapore and Malaysia have expressed their concern and asked the conflicting parties there to have a dialogue and find a peaceful solution.

Former Chairman of the Fact-Finding Mission on Myanmar, Marzuki Darusman, said Indonesia has to take a firm stance in regards to the situation in Myanmar. Marzuki believes that Indonesia should be relied upon by ASEAN to solve this problem because currently ASEAN countries seem to be hiding behind each other’s backs. According to him, Indonesia has a good standing in UN political institutions, such as the Security Council and the Human Rights Council. Moreover, as a member of the Security Council, Indonesia is also responsible for conflicts that occur in the world, including Myanmar. “Indonesia might have a bigger problem on its hands if the situation in Myanmar drags on,” said Marzuki.

Indonesia’s name was tarnished when news emerged that Jakarta supported the military junta’s plans to hold new elections. This was considered as a general approval of the military junta. Demonstrators staged a protest in front of the Indonesian Embassy to Myanmar in Yangon on Tuesday, February 23.

Ministry of Foreign Affairs spokesman, Teuku Faizasyah, denied the news. According to him, Indonesia’s position has not changed. “We are worried about the situation in Myanmar and reiterate that ASEAN principles should be used in resolving the situation there,” said Teuku on February 23. He said that Indonesia is currently in consultation with the foreign ministers of ASEAN member countries to deal with the situation in Myanmar.

Foreign Minister Retno Marsudi discussed the Myanmar issue during a visit to Brunei Darussalam and Singapore two weeks ago. Previously, she discussed the Myanmar crisis during Malaysian Prime Minister Muhyiddin Yassin’s visit to Indonesia in early February. In a written statement on February 24, Retno said that she has spoken with the foreign ministers of a number of countries in ASEAN, Australia, Japan, America, China, Britain and India, as well as the Special Envoy of the UN Secretary-General. She also met with Myanmar’s Foreign Minister Wunna Maung Lwin and his delegation in Bangkok, Thailand. Prime Minister of Thailand, Don Pramudwinai, also attended the meeting.

Retno said Indonesia would not stand idly for the sake of maintaining peace, stability and prosperity in Southeast Asia. She said that Indonesia’s position is to prioritize the safety of the Myanmar people. That is why Indonesia will continue to emphasize the importance of an inclusive democratic transition process through dialogue and respecting the principles in the ASEAN Charter. “Indonesia stands with the people of Myanmar,” she said.