Flames of Racism in Atlanta


Six women of Asian descent were among the victims of mass shootings in Atlanta. Racism is on the rise in the United States as attacks on Asians are escalating.

ILHAM Munawar Siddiq has been living in Atlanta, Georgia, the United States, for almost two years. The postgraduate student at the Georgia Institute of Technology shares an apartment at the Midtown area with his two colleagues and American friends. It is only a five-minute drive from Piedmont Road where the mass shootings—suspected to be racially motivated—took place in mid-March.

The Piedmont road is lined with shops, clothing stores, a home depot, beauty salons, and massage and spa parlors. Ilham and his friends usually pass the road on their way to buy groceries. “It is a familiar place because we often pass through it,” the Aceh native told Tempo last Thursday, March 25.

On the evening of March 16, an armed man attacked two spa parlors situated opposite each other, killing Hyun Jung Grant, Soon Chung Park and Suncha Kim, the employees of God Spa, and Young Ae Yue, a therapist at the Aromatherapy Spa.

The gunman’s rampage at the two spas came less than an hour after he launched a similar attack on Young’s Asian Massage in Acworth, Cherokee Country, around 48 kilometers from Piedmont, which killed Xiaojie Tan, the spa owner; Daoyou Feng, an employee; Paul Andre Michels who was installing shelves at the spa at the time; and Delaina Ashley Yaun, a customer. Yaun was with her husband Mario Gonzalez. Gonzalez escaped the shooting because he was in another room and hid himself from the gunman as soon as he heard the gun shots. Elcias R. Hernandez-Ortiz, a mechanic and a Guatemalan immigrant, the only survivor in the shooting is currently in intensive care for his injuries in the head, chest and stomach.

From the closed-circuit television (CCTV) footage, the police identified the shooter as Robert Aaron Long. The 21-year-old native from Woodstock, Georgia, was later arrested in Crisp County, about 240 kilometers from Atlanta. Long admitted to have carried out the shooting but denied being motivated by racism. His shooting spree has resulted in the deaths of eight people and six among them were Asian women. He has been charged with eight counts of murder and is detained at the Cherokee County jail without bond. 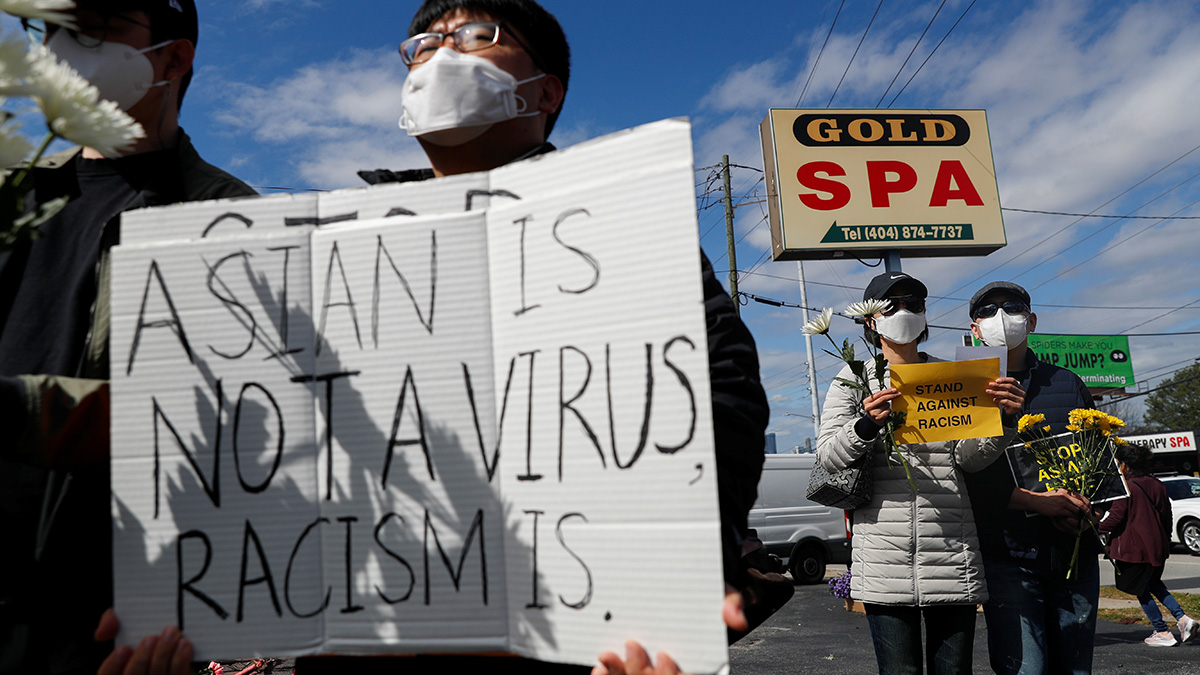 People hold placards during a vigil at a makeshift memorial outside the Gold Spa following the deadly shootings in Atlanta, Georgia, US, March 21. Reuters/Shannon Stapleton

The police have not linked the attacks to racism or anti-Asian sentiments. The case, however, has sparked outrage and anxiety among Asians in the US given the surge in racially-motivated attacks amid the raging Covid-19 pandemic. As reported by the Washington Post, Donald Trump’s statement that the pandemic was caused by the virus from China has helped fuel the sparks of anti-Asian sentiments.

US President Joe Bidan condemned the shootings and violence against the Asian American community. He also urged the Congress to pass the hate crime bill proposed by two legislators of Asian descent. “Hate can have no safe harbor in America. It’s on all of us together to make it stop,” he said.

In Washington DC, around 100 people gathered for a rally in Chinatown the night after the shooting and lit candles in memory of the victims. Another hundreds of people joined a protest near Georgia State Capitol carrying signs that read, “Stop Asian Hate.” Many passing cars honked car horns to show support.

Xiaoxu Zheng, a researcher from the Georgia State University, took to the street for the first time. As he told the Wall Street Journal, Zheng is worried about the rise in anti-Asian sentiments. Zheng has lived in the US for a decade and currently resides in Atlanta with his two children. “We live here. We pay taxes. We work here. This is our life,” he said.

Some Asians have resorted to buying guns for self-protection. Forbes reported that the number of Asians buying guns was increasing. Jimmy Gong, the owner of a gun store in New York, pointed out the Asian community never had a gun culture before. “But after the pandemic and all the hate crime going on, there are more Asians buying guns to defend themselves,” he explained.

Ilham is also more alert now. He has gone out only three times since the Piedmont incident and avoided the shootings site. He was used to hearing about the shooting incidents in the city but they never worried him like they do now.

Atlanta is among the most dangerous cities in America due to the high crime rates. The situation is worsening as many people lost their jobs in the pandemic. The Atlanta police department recorded 157 homicide cases in 2020 compared to 99 in 2019. Atlanta also saw the highest number of Black Lives Matter anti-racism protests in response to the police violence that resulted in the death of George Floyd on May 25, 2020.

A myriad of racism attacks, from slurs to physical assaults, against Asians in the US is rising. A research conducted by a team at the California State University in San Bernardino concluded that the racism crimes had increased almost 150 percent in 2020. NBC reported that out of the 16 cities studied, New York and Los Angeles saw the highest number of racial crimes.

A report released by Stop AAPI (Asian American and Pacific Islander) Hate—a forum campaigning against racism against people from Asia and Asia Pacific regions—last week also said that attacks against Asians had been increasing since the pandemic began. It recorded 3,795 cases in the period between March 19, 2020 and February 28, 2021. The number is a jump from 2,600 of the previous year.

The report also pointed out that Asian women are more vulnerable to attacks, namely 68 percent from the total incident. Russell Jeung, a professor of Asian American Studies of the San Francisco University cited a combination of racism and sexism, including the stereotype that Asian women are meek and subservient, as likely factors behind the increased vulnerability. “Asians and Asian women are perceived as easy targets,” the founder of Stop AAPI Hate told ABC News.

Edward Panjaitan, a Medan (North Sumatra) native who has been living in Michigan for the past 20 years, is often mistaken for a Chinese because of his features. When he interacts with the locals, he is often referred to as ‘the Chinese’. Edward did not pay attention to such a prejudice. Nor he changes his routines following the shooting incidents. “I go out as usual. I still feel safe here”, said Edward, who lives in Lansing, the capital of Michigan.

On the other hand, Ilham is more cautious now when he needs to go out. He chooses to leave early in the morning with his white American friends for he himself has experienced racism before. Around the end of 2019, as he was shopping in Publix, a supermarket in Atlanta, a middle-aged white woman he passed by called him ‘monkey face’.  He chose to keep quiet. “I only realized after I told my white American friends that it was an insult often directed at black people,” he recalled.