The project work is now being rearranged not long after an announcement for temporary suspension.

A number of heavy equipment provider subcontractors repeatedly contacted Adhi Karya’s general manager for light rail transit (LRT), Isman Widodo, on Tuesday two weeks ago. They asked about the LRT project from Cawang to East Bekasi, which spans 18.5 kilometers. The day before, Transportation Minister Budi Karya Sumadi requested the LRT work at the Jakarta-Cikampek toll road, from kilometers 11 to 17, in West Java, be suspended.

Subcontractors were distraught because many of their heavy equipment were used in the project. They did not want to lose money from letting the tools sit idly on the project site for days. “If the work is halted, we have to bring them home, or move them somewhere else,” Isman told Tempo last Tuesday. Meanwhile, Adhi Karya did not want their project delayed any longer. “We told them that things were being evaluated.”

“We will ask the LRT and KCIC to cease construction work at kilometers 11 to 17. For the time being, there must be no activities there,” he said.

His statement upset contractors and subcontractors. Adhi Karya CEO Budi Harto sought confirmation about this matter to Bambang Prihartono, head of the Greater Jakarta Transportation Management Agency (BPTJ). By phone, Budi Harto made sure that the LRT construction could continue until the scheduled completion, which is the end of next year. “If it is stopped, we would have to keep paying for additional expenditure and the trains won’t be able to operate as scheduled,” Budi Harto said.

Budi Harto said that the Adhi Karya’s work at the site did not affect traffic at the Jakarta-Cikampek toll road. On site, the work covers six points, the Cikunir long span, Bekasi long span, feeding point at kilometer 13 + 400, Cikunir Station, West Bekasi Station, and East Bekasi Station. “All cranes were located outside the toll road. When the concretes came, the trucks only stopped briefly before moving again,” he said, adding that they only did that at night. 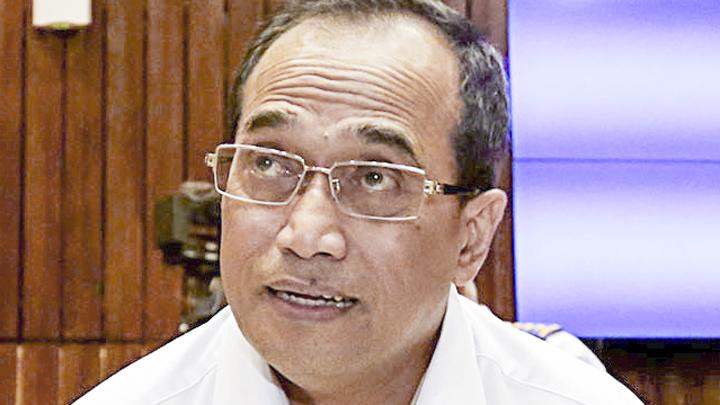 Isman said that his company submit regular reports about the construction plan to the government through a coordination meeting led by construction management consultant Ciriajasa Cipta Mandiri, under the appointment of Jasa Marga (Persero). Since August, before the Asian Games in Jakarta, a coordination group was formed through WhatsApp. More than 50 people joined the group, including Isman. All contractors responsible for the project reported the work plan and construction progress daily. The data reported is pretty detailed, including the location of the project and the work period.

“We also reported about how we handled problems. We kept giving updates,” he said. The police as well as officials from the transportation ministry and the public works ministry are among members of the chat group.

Four days before Budi Karya decided to postpone the project, all stakeholders met at the public works ministry’s building, invited by the directorate-general of highways. The main topic of the meeting was also about congestion around the project at the Jakarta-Cikampek toll road. KCIC CEO Chandra Dwiputra said the meeting did not immediately resolve the congestion problem.

Chandra, who delegated his team at the meeting, received reports that the traffic jam was due to the narrowing of the lane on the Jakarta outer ring toll road ahead of Cikunir’s gate, from kilometer 9 to 10 bound to Jatiasih. At that point, the KCIC is building a bore pile foundation for a tunnel.

The meeting decided to relocate the Cikunir gate, from what was initially the work of KCIC, transferred to Waskita Karya. The reason, Waskita’s heavy equipment is ready at the location. The completion target is set on the first week of December.

Waskita Karya is assigned to work on a 38.6-kilometer overpass project at the Jakarta-Cikampek toll road, under the coordination of Jasa Marga Jalan Layang Cikampek (Persero). The highway will stretch from Cikunir to West Karawang. The LRT piles are located on the left side of the Jakarta-bound lane, while the overpass’s columns are located in the middle, dividing the two lanes. This project is given a priority by Transportation Minister Budi Karya, because it is scheduled to be ready before the Idul Fitri homecoming period next June. The project’s progress had reached 58.5 percent as per the end of November. “We are calculating other constructions, we’ll see in three to four months,” said Budi Karya.

Bambang Prihartono, chief of the Greater Jakarta Transportation Management Agency (BPTJ), confirmed about the bottlenecking at kilometer 9 and kilometers 11-17. There are five projects being constructed in the areas, including the LRT, the Jakarta-Bandung high speed train, and the Jakarta-Cikampek elevated toll road. In addition, there are road repairs and construction of short overpasses.

Since last year, Bambang said, traffic conditions worsened along with the construction sites. In mid-November, the National Traffic Police Control Center reported that 11 kilometers of traffic jams also occurred at the Jakarta-Cikampek toll road, at kilometers 30-41. “We’ve been panicking for a long time,” Bambang said.

However, when receiving a telephone call from Budi Harto, Bambang ensured that the arrangement of the project on the Jakarta-Cikampek toll road would not hamper the work plan. “They thought we were the one who suggested the minister to stop the LRT and fast train projects. That’s not what was meant,” he said.

Coordinating Minister for Maritime Affairs Luhut Binsar Pandjaitan is also concerned about changes in the transportation projects. Luhut supports the re-management of the projects in order to keep traffic smooth at the Greater Jakarta areas. He denied reports that the projects were halted due to budget constraints. “There is no problem with that.”

All project contractors’ directors confirmed this. Budi Harto revealed that of the loans totaling Rp12 trillion, Adhi Karya had paid back Rp6.2 trillion. KCIC has also received a loan of US$810 million (approximately Rp11.6 trillion) at the end of October. 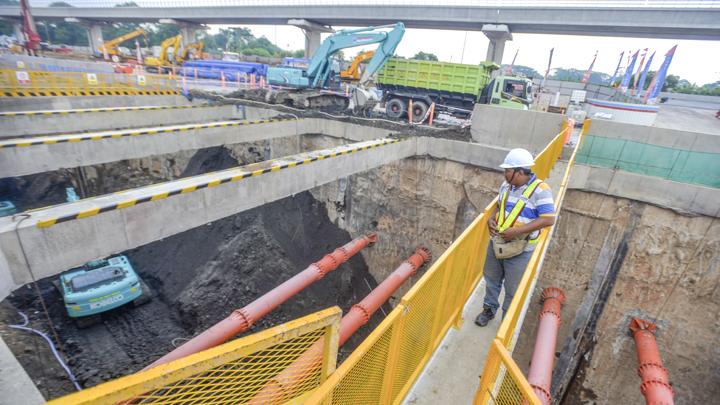 CARS and trucks slowed down at kilometer 10 when Tempo drove through the Jakarta-Cikampek toll road last Thursday. At that point, the road narrowed from four into three lanes. On the left, the overpass railroad piles stood upright, covered by moveable concrete barriers and zinc. In the middle, the overpass highway pillars were exposed, with orange cones separating them from the passing cars, which are side by side with heavy equipment.

A number of contractors said that the construction arrangements by construction consultants Ciriajasa Cipta Mandiri had not been very optimal, causing traffic jams around the project sites. “As stated by Jasa Marga, the management is not so powerful that now it must be assisted by the BPTJ,” KCIC CEO Chandra Dwiputra said.

According to Chandra, the KCIC consortium makes daily reports on the work plans and progress to them. BPTJ chief Bambang Prihartono confirmed information that the transportation ministry instructed the BPTJ to take over the regulation of traffic around the project. “Because so far Ciria focused more on project implementation.”

Jasa Marga CEO for the Cikampek Overpass, Djoko Dwijono, denied notions that the consultant he appointed did not perform on par. According to Djoko, traffic volume on the toll road along the project is quite high. In addition, the consultant must adjust to various regulations from the transportation and the public works ministries. “I think that the synchronization entire project work they are doing is still tolerable,” he said.

Djoko also said that with the addition of the BPTJ’s odd-even plate’s policy at Tambun Toll gate toll road, traffic volume would decrease and so will congestion. This policy will be put in effect on December 17.

After a joint meeting with the transportation ministry on Thursday two weeks ago, Jasa Marga CEO Desi Arryani ensured that the constructions of overpass, LRT, and Jakarta-Bandung fast train are progressing as planned. Desi said the construction of the Jakarta-Cikampek overpass toll road would be completed first, and so the overpass will be able to take in some 30 percent of the vehicle volume. “If we don’t speed this up, the Jakarta-Cikampek will be on grid lock one day,” she said.

Furthermore, Jasa Marga will extend the Jakarta-Cikampek toll road by 10 kilometers to the south until Sadang. Construction will begin in the first half of 2020.

After the meeting, Transportation Minister Budi Karya corrected his decision verbally. “We are not just stopping things at random,” he said, adding that all he asked is for the work to be done efficiently, not piled up together at the same time.

Meanwhile, Adhi Karya is still waiting for the determination of the railway line from Setiabudi to Dukuh Atas. Budi Harto urged Jakarta governor and the transportation minister to immediately establish the location of this project. “It should be determined immediately.” Once the LRT is in operation, at least 750 commuters can get on the train every day.

The BPTJ cannot wait for mass transportation to be available next year. “The odd-even policy is only for a year, the transportation burden is getting heavier. We have to manage this smartly,” BPTJ chief Bambang Prihartono said.