THE Surakarta city police in Central Java has issued an official letter halting the legal process against Slamet Maarif, chairman of the 212 Alumni Brotherhood.

THE Surakarta city police in Central Java has issued an official letter halting the legal process against Slamet Maarif, chairman of the 212 Alumni Brotherhood. Three weeks prior to this, the police said Slamet, also deputy chairman of the Prabowo Subianto-Sandiaga Uno campaign team, had violated campaign laws. He was accused of campaigning while speaking at a mass meeting at Solo’s Bundaran Gladak in Jalan Slamet Riyadi on Sunday, January 13.

National Police Spokesman Brig. Gen. Dedi Prasetyo said the latest move on the case was done according to procedure, and has no political motives. “The police is professional in conducting investigations. This also has to do with the integrity of the investigators,” Dedi said on Wednesday last week.

The elections monitoring board (Bawaslu) had received reports about violations from the rival Jokowi-Ma’ruf campaign team from Solo. After that, Bawaslu send a team into the field to check out the report. Then, Bawaslu discussed the incident in an integrated legal team, which also included police members. “We suspected that there were campaign intentions,” said Poppy Kusumo, who is part of Bawaslu’s enforcement team for Surakarta.

Bawaslu chairman Abhan regretted the police’s latest decision. He said this case should have been taken to the next level instead of being halted. “When a case has been discussed from the beginning by three institutions, it should not be dismissed. If it had been weak from the start, it should never have been processed. If it’s a strong case, it should advance,” he said.

Slamet Maarif, meanwhile, was grateful that the case has been dismissed. “Thanks be to God, all my prayers. Hopefully the police will maintain its professionalism,” he said.

A number of people have been convicted for violating elections regulations. Their cases have gone to court.

Received a three-month jail sentence and a Rp5-million fine.

Received a three-month jail sentence and a Rp5-million fine. 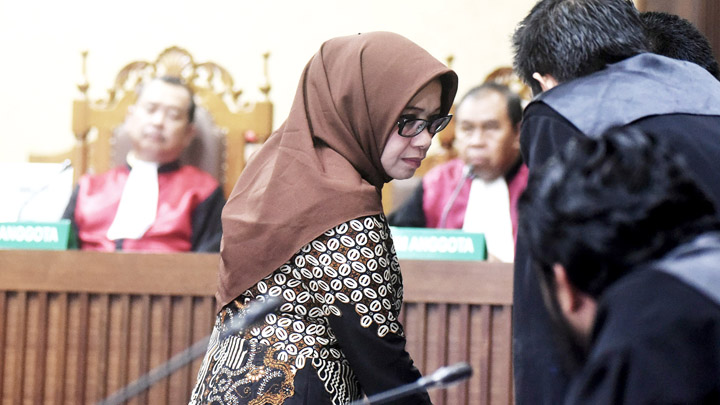 FORMER deputy chairman of the parliamnetary energi council, Eni Maulani Saragih, has been handed down a six-year jail sentence. Judges of the Jakarta Corruption Court found her guilty of accepting bribes of Rp4.75 billion from businessman Johannes Budisutrisno Kotjo. “We deem the accused guilty of collective corruption,” said chief judge Yanto when reading out the verdict on Friday last week.

The judge also revoked Eni’s right for holding publicly elected positions for three years. Eni was proven to have received bribes from Johannes Kotjo as a shareholder of BlackGold Natural Resources Ltd. The bribe was given to Eni in order to smooth the way for Johannes Kotjo to clinch the Independent Power Producer project for a steam energy plant in Riau.

Eni, a politician from the Golkar party, was also proven to have received grafts of Rp5.6 billion and Sin$40,000. A lion share of the money received from that oil and gas business was used for party purposes. Eni did not have any plans to contest the verdict. “I accept it,” she said.