Joko Widodo, President of the Republic of Indonesia: Leaders Should Not Inflame Situations

Not because he and his running mate Ma’ruf Amin are placed in a winning position above the rival ticket Prabowo Subianto-Sandiaga Salahuddin Uno by the majority of the survey groups, but rather because the post-truth politics has overridden the well-regarded methodology. “We’ve lost our rationality,” he lamented.

Jokowi, 57, felt it was time to speak up after he read the editorial of the April 25 issue of the Koran Tempo newspaper which he had cut out and kept on his office desk. Titled The election fraud propaganda, the article accused the Prabowo-Sandiaga pair of deceiving the public with their call to dismiss the quick count results.

During the interview with Tempo’s Budi Setyarso and Reza Maulana at the Bogor Palace last week, he read the editorial out loud with occasional high intonation. “Why didn’t anyone dare to speak like this before?” he asked.

The President regretted that certain quarters have created public opinions by claiming victory and caused confusion among the public in the process. “I really shouldn’t be speaking with candor during interviews,” he said while shooting a glance at Bey Machmudin, the deputy for protocol, press and media of the presidential secretariat, who accompanied him throughout the interview. “But I can’t help it, no.”

The interview, initially scheduled by the palace’s protocol for 15 minutes, went on for 45 minutes. Jokowi also talked about his futile attempt to meet Prabowo, the 2019-2024 work plan and the planned cabinet shakeup.

How did the Koran Tempo editorial attract your attention?

We appreciate the writers’ courage in writing articles like this. Why didn’t anyone dare to write like this before? Let’s take a look, ‘All the propaganda to delegitimize the 2019 general elections results must end. Repeated accusations of fraud without evidence can erode the public’s trust in the election results.’ In the post-truth era like now, this is dangerous.

Like it says here, ‘The unsportsmanlike or even dirty attitude can endanger democracy.’ That is very true. The public have already participated in the elections. We’ve spent Rp25 trillion for the elections only to be undermined by actions like these. There also emerged the term ‘structured, systematic and massive’ (TSM) cheatings, as if cheating has been everywhere. The term TSM has been used in the 2014 presidential election. Now it added with ‘brutal’. Good grief! Poor public. They are confused.

Were there not a number of frauds that indeed occur?

Yes, there were but not like the accusations that say cheatings were everywhere. Legislative candidates, for example, also want to win if there are opportunities.

If so, why didn’t you counter them?

I want to speak bluntly when I am interviewed but my team, Bey (Machmudin), doesn’t allow me to do so. He said, ‘Please don’t, Sir. It will heat up the situation.’ But when I see and hear words like structured, systematic and massive—now added with brutal—I can’t help myself, no.

Do you read the all editorials of the media?

I like to keep clippings of positive articles for reading. No one has the guts to speak like the Koran Tempo editorial. The media and also nonformal leaders must be able to clear up public discourses. If not, fake news makes all of us dumb and we lose our rationality. This post-truth situation is real. When we keep hearing lies, they affect our subconscious mind. The longer people are exposed to lies, the harder it is to cure them.

Prabowo Subianto-Sandiaga Uno’s team urged the public not to trust the presidential election quick count. What is your reaction?

Quick counts have consistently given fairly accurate results. Surveys may miss the mark but the quick counts usually don’t. We ask the public to think logically and scientifically. 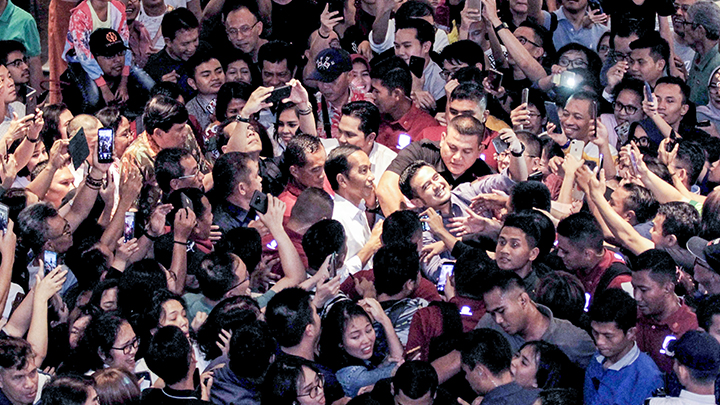 How deeply do you believe in quick counts?

I remember the 2012 Jakarta gubernatorial election (Joko Widodo running against incumbent Fauzi Bowo). At 3:15pm (the second round of polls took place on September 20, 2012), after the quick count results came out, Pak Fauzi Bowo called and said, ‘Congratulations, Pak Jokowi. You are the winner. On Monday, I’ll take you to the City Hall to see your new office.’ Let us not cover up the things that we already know. Everything is already clear.

But you instead asked your supporters to wait till May 22 when the General Elections Commission (KPU) will announce the official result.

Yes, once again, be patient. We must wait for the official result.

Did you also tell the 25 world leaders, who congratulated you, to be patient?

What measures have you taken to reconcile the public that have been bitterly divided over the presidential election?

We assigned Pak Luhut (Maritime Affairs Coordinating Minister Luhut Binsar Pandjaitan) to meet with Pak Prabowo. It is great if the meeting can take place and the public see it proving that friendly ties continue after the competition. After all, after the race, we are no longer the supporters of presidential candidates but Indonesia. I believe it is a good political education. But Pak Luhut has only spoken with Pak Prabowo via telephone at this stage.

Did you try to meet with Sandiaga Uno?

Well, we will try one by one. Pak Ma’ruf wants to see him.

So now you can only wait for Prabowo-Sandi’s readiness?

Was the meeting with Zulkifli Hasan last Thursday (April 26) was part of reconciliatory efforts?

Such meetings are just normal political communication. We met after the inauguration of Maluku Governor and Deputy Governor Murad Ismail-Barnabas Orno at the state palace.

Meeting Zulkifli in his capacity as Speaker of the People’s Consultative Assembly (MPR) or Chair of the National Mandate Party (Prabowo’s supporter in this election)?

As Pak Zul as I know him, (laughs)... Whether as the MPR speaker or PAN chairman? For me, it can be both.

Is it true that you asked Vice President Jusuf Kalla to help build communication with Prabowo?

For a good cause, anyone is possible including Pak JK.

The Prabowo-Sandiaga team said there is no need for reconciliation as they don’t believe there is division among the public.

If they think it’s not necessary, then we cannot meet, (laughing)...But we do wish to meet.

Why do you feel the meeting is important?

To cool the atmosphere after the heated elections. That’s a leader’s job. Not to inflame the already peaceful situation.

How about long-term reconciliation such as embracing political opponents to join the government?

It’s still too early to discuss that. We focus first on the KPU’s official announcement.

How satisfied are you with the 2019 presidential elections in terms of votes garnered?

Well, it’s below target. Our calculation gave us 58-62 percent, the lowest and the highest targets. (The average quick count result puts Jokowi-Ma’ruf at 54 percent).

The bottom line is that it went well, smoothly, fairly and squarely. If there are cheatings, they are individual in nature. Frauds exist in past elections too. People will always try (laughs)...It was an extremely huge election involving 813,000 polling stations scattered across 17,000 islands, 514 regencies and towns as well as overseas and participated by 190 million voters. Other countries acknowledge the success. But, nonetheless, it was a very long process including eight tiring months of campaign. I don’t feel tired but it was tiring for many including the public.

Did you lose weight during the campaign?

It’s just about the same, (laughs)...Between 56 and 57 kilograms. Sometimes it goes up one kilo then goes down one kilo. Quite stable.

What does the Jokowi-Ma’ruf administration’s work for the next five years look like?

There is so much to do. We will continue with the infrastructure development, streamlining regulations and institutions, and human resources development.

Some of the infrastructure projects are viewed as mis-targeted...

We love anything instant, don’t we? Sometimes we need to swallow a bitter pill first. Sometimes, infrastructure development projects bear fruits only after two, five or even 10 years because a given area needs to be connected to industrial, tourism or other strategic zones. Now some are still in the process of building connectedness.

Even after connectedness, may projects don’t seem to have impact on the national economy.

We’ve calculated everything. If we want to do easy work, we only need to develop Java. We have 149 million people here. For infrastructure, a super corridor in the northern Java would greatly contribute to the economic growth. But our principle is to create both economic growth and equity. Lack of equity creates sense of injustice. We have smooth roads here while there is a regency in Papua without a meter of paved road. Many people talk about the return of economy from the Trans Papua road development. If we calculate like this, Papua will never progress. Therefore, we developed the eastern Indonesia where each province has two or three million people. That is in essence the social justice for all Indonesians.

In reality, there is no positive correlation between backwaters development and support for you in the election.

No. But we won 94 percent of the votes in Papua and almost 90 percent in East Nusa Tenggara, (chuckles). Once again, we have a country to run. We just don’t play politics or develop economy.

Will there be changes in the cabinet to adapt to your work plan.

Yes. Perhaps a lot given the programs that are now different.

Is it true that you will shuffle the cabinet before the swearing-in?

Well, the KPU hasn’t even done counting. One by one please.

Reportedly, the reshuffle will be done earlier so that the new cabinet can get to work as soon as you and Ma’ruf Amin are sworn in this coming October?

Well, that may happen or that may not happen, (chuckles)...

What is the ideal composition between professionals and politicians in a cabinet?

How is the work distributed between you and Ma’ruf Amin?

Just like I had with Pak JK. I never share roles with the deputy. For example, it’s OK too if Pak Ma’ruf has more roles than myself, (chuckles)...

How do you want to be remembered at the end of your tenure after the next five years?

I’m not a grandiloquent person. My job is to work as hard as I can. When it is done, the people and the history will remember it.