An Online Sanctuary for Rare Sounds


Palmer Keen’s interest in Indonesia’s culture and traditions has taken him to the country’s various corners, to record unique sounds. He archives the histories of these musical instruments.

Sounds reminiscent of the jaw harp reverberated from Sugimo’s bamboo house in the Beji village in Gunungkidul, Yogyakarta, in mid-April. The sounds were soothing, especially amid the twittering of birds perched on the trees around Sugimo’s house in the Duren hamlet. The high-pitched but gentle sounds came from two rinding played by Sugimo, 68, and Palmer Keen, an ethnomusicologist from the United States.

Rinding is made from thinly sliced bamboo, with air pockets at the center of the instrument, where sound is produced. Rinding is played by placing it between the lips and pulling at the string at its end. “Playing rinding is like meditating, really uses your emotions,” said Keen.

Keen’s unusual personal project has brought him around the archipelago since 2013 to record the country’s musical traditions. Though most of the country’s traditional musical instruments may seem simple, Keen believes that they produce unique sounds and archives both their sounds and histories on his site, Auralarchipelago.com. The English-language site is like a small oasis for near-extinct Indonesian musical instruments barely known to the public.

Keen, 30, lives in Manhattan Beach in the suburb of Los Angeles, United States. But he has traversed nearly 30 Indonesian provinces to closely acquaint himself with the country’s traditional musical instruments. Although he has used his own money to fund the journey, he has also been collecting donations through his site.

Rinding is one among the many instruments Keen has archived. When we met him in Yogyakarta in April, he showed us around 20 musical instruments, which he pulled out of a bag carefully, handling them as one would valuables. “These musical instruments are nearly extinct,” he said. Among the items were bamboo jaw harps collected from various Indonesian regions, including bangkong reang. Keen then played the Sundanese musical instrument, which began to emit a loud sound reminiscent of kodok bangkong (boreal toad).

Keen explained that there is a musical instrument similar to the rinding in Wonogiri, Central Java. In West Java, the instrument is known as karinding. Residents of Gunungkidul, Yogyakarta, call the instrument rinding because its sound can easily cause goosebumps (merinding). No one knows for sure when the rinding first emerged and was played by Gunungkidul residents. What is certain, said Sugimo, is that he and others in his village play the rinding when the harvest season arrives. The tradition is part of a local wisdom called sadran. During the ritual, Beji residents carry their paddy to the Wonosadi Hill, around five kilometers from Sugimo’s home. They march carrying rice, chili paste and bananas to the Mboyong Dewi Sri tune. The worship song carries the hope that nature will remain preserved and that the locals will want for nothing.

In the Javanese mythology, Dewi Sri is the goddess of rice. “She is truly fond of the sound of rinding when the paddy is being carried from rice fields to the locals’ homes,” said Sugimo. 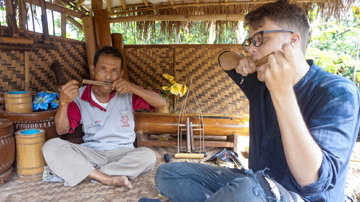 PALMER Keen’s love for traditional Indonesian music was sparked by the gamelan (traditional Javanese orchestra). While studying modern literature at the University of California, Santa Cruz, United States, Keen had the opportunity to learn the gamelan as an extracurricular activity. When he graduated in 2011, he then traveled to Indonesia.

He began exploring Indonesia’s traditional musical instruments in Bali, before moving on to West Nusa Tenggara (NTB) and East Nusa Tenggara (NTT). In Lombok, NTB, he encountered gendang beleq (a percussive instrument). He then went to Sumbawa, Flores, and Rote Island, NTT. In Rote, he found the sasando (traditional string instrument). He also traveled through Banyuwangi, East Java, West Kalimantan, and South Sumatra.

Keen’s journey brought him to Kalimantan, Sumatra, and Sulawesi. In West Kalimantan, he found acapella music. He also became acquainted with the kadedek, a musical instrument from the Sintang Regency, West Kalimantan. The instrument, made from bamboo and squash, is played by the Dayak tribes. “This is the ancestor of harmonica and accordion,” said Keen. He became acquainted to the kadedek through a book titled Music in Java. The book also mentioned that the musical instrument is depicted in the relief work of Borobudur  Temple in Magelang, Central Java.

One day, Keen read a book about the ghazal music. He went to West Sumatra to learn more about the music, which was once played by residents of West Sumatra of Indian descent. The acoustic harmonium is estimated to have emerged in the 1950s. It is played with rebana (tambourine) to accompany songs with lyrics with heavy Indian influence.

In Palu, Central Sulawesi, Keen became enamored with the lalove, the Kaili Tribe’s traditional wind instrument. The people of Palu believe that the 75-centimeter instrument carries the spirits of ancestors. “We believe that when the lalove is played, it can heal a person with terrible illness,” said Saprin, a lalove player.

To conserve the lalove, Saprin founded Sanggar Pedati for local youth. Once in a while, Saprin would visit Palu’s schools. “We don’t want the lalove to be forgotten,” he said.

WEST Java is home to various musical instruments just as interesting as the lalove, among others, the tarawangsa, a lute-like string instrument. The Pasundan bowed instrument is usually played during ngalaksa, an annual celebration in Sumedang. In the traditional Sundanese ritual, locals carry their paddy to the granary to show their gratitude to God for an abundant harvest. Tarawangsa’s beautiful and magical rhythm often entrance listeners.

Palmer Keen was intrigued by the tarawangsa. One day, he attended a ngalaksa event in Sumedang. The minimalist and repetitive music was played all night long. Almost everyone present fell into a trance, as if possessed. Keen was not inured to the magical atmosphere. Locals threw their stoles at Keen, who then joined the dancing. “Because I was lulled by the music, I also fell into a trance,” he said.

Tarawangsa has frequently been the object of study by the country’s ethnomusicologists. Ethnomusicologist Endo Suanda says tarawangsa’s tune is not “sweet,” but it’s as if the music encourages us to imagine ancient times. When tarawangsa is played at ngalaksa with jentreng, a lute-like instrument with seven strings, dancers often fall into a trance. “But the trance is very subtle,” said Endo.

Dancers at tarawangsa will usually snap out of the trance on their own and begin apologizing to each other. Endo believes that the phenomenon happens because the dancers seek a connection through the tarawangsa, and that the dance is well-intentioned.

Tarawangsa is similar to rebab—a bowed string instrument—but is believed to be much older. The instrument nicknamed the “tall rebab,” said Endo, is so ancient that it is called the oldest instrument in the Sunda land. “My analysis is that it appeared before the rebab.” The instrument has had a long history and is mentioned in the Sewaka Darma, a manuscript written before the 15th century. Meanwhile, rebab only arrived in Java one century later, adapted from a musical instrument brought to the country by Muslims from the Middle East and India.