RAMZA Atmaja held the Gatot Kaca wayang (shadow puppet) as he sat on the floor with his legs crossed. Ramza and over a dozen of his friends are learning how to become a dalang (puppeteer) at the Sanggar Taruna Krida Rasa puppeteering school, known simply as Sanggar Takir (Takir Studio), in Lesanpuro village, Malang City, East Java. “I like it and want to learn,” said the 16-year-old boy on Friday, May 17. “And to preserve traditional arts.”

Ramza has been learning at Sanggar Takir since 2008, when he was still in kindergarten. Even as a boy, he was already fond of wayang theater. Often he would go with his father to watch wayang performances. Coincidentally, his father also keeps a collection of wayang characters at his home, among others, the characters Werkudara, Arjuna, Nakula, Sadewo, and Yudhistira.

Ramza has given many performances as a shadow puppet master, both at school and at annual parades organized by Sanggar Takir. Nevertheless, he still hopes to hone his skills further so that he could one day appear before larger audiences, even internationally. “To carry Indonesia’s name to the international world.” 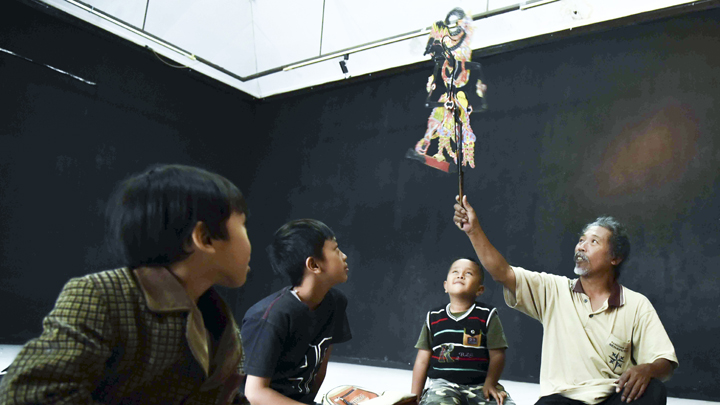 Suwarno teached his students how to hold and play a shadow puppet. TEMPO/Aris Novia Hidayat

But he was not yet satisfied. So that he would be able to better accompany wayang performances, he learned puppeteering. He joined a puppeteering course organized by the Indonesian Puppeteers Association in Malang. Instead of praises, he received mockery from other artists, who told him that he could not even play the kendang right, when he was already learning other instruments and puppeteering. He paid no heed to the insults and completed the course.

To Suwarno, learning to be a dalang means learning other lessons as well, such as in communicating with the elderly, those his age, and people who are younger. Additionally, he had to learn the culture of courtesy and unggah-ungguh (roughly, hierarchy-based etiquette). “The Javanese has an exquisite, invaluable culture,” he said, “and it must be preserved.”

After the puppeteering course, Suwarno joined Mbah Umbar and Sumbur as trainers at the Shadow Puppet Master School managed by Sanggar Senaputra. But he resigned because he and the management did not see eye to eye. Not long after, Mbah Umbar passed away and the school closed down. Some of the students asked Suwarno to continue the school. He then opened a school, which he then named Sanggar Taruna Krida Rasa. After moving locations several time, he finally decided to open the school at his own home starting last year.

Children and teenagers from various regions in the city and regency of Malang come to Suwarno’s school to learn the art of performing wayang. Rehearsals are held twice a week. On early Friday afternoons, students learn puppeteering. On Tuesdays, they learn the karawitan—Javanese music ensamble with an emphasis on vocals.

Beginners are first introduced to cepengan (grip), lampahan (stride), and wayang characters. No matter their age, Suwarno explained, students who have not studied wayang must begin by getting acquainted with wayang characters. Gatot Kaca, for example, is known as a dugangan character with broad strides, while Kresna, Janaka, and Duryadana are bokongan characters. “Short strides and (they have) buttocks,” he said.

After comes the introduction to grip. If a wayang is held with the wrong grip, said Suwarno, its personality will not emerge.

On average, a student requires six months to one year to truly understand wayang characters. “First an introduction, then a closer acquaintance, followed by the study of wayang theater,” said Suwarno.

In the next stage, students will learn jejeran—the opening line-up scene. Every time they learn puppeteering, students must also learn karawitan and gamelan accompanying music, including those that are required, such as Srepeg, Sampak, Ayak, and Ladrang. A dalang, said Suwarno, must understand the character of each gamelan instrument, including the kendang, rebab (a bowed string instrument). “It’s better for a dalang to master all (gamelan) instruments,” he said.

Next, students must memorize either the Ramayana or Mahabharata story. The essence of the story must be committed to memory, the scenes planned out, and finally, the dialogue between wayang characters in each scene must be prepared.

Besides the Solo wayang, Suwarno also teaches the Malangan style wayang, known as Wayang Jekdong, which adapts the epic poem, Panji Asmara Bangun. What differentiates the two types are the accompanying music, the shape of kendang, and the wayang puppets’ appearances. “Malang (people) can be proud that the Malangan wayang is also taught at the Indonesia Institute of the Arts in Solo,” said Suwarno.

When asked how long a student must train before he or she can master the art of pedalangan (puppeteering), Suwarno said, “depends on the student.” The time it takes for a student to achieve competency rests on the student’s diligence and sensitivity to the different traits of wayang characters.

Suwarno also pays attention to the psychological development of his students. A dalang candidate must not be burdened during practice, including by his own fears—for example, the fear of making mistakes or holding a wayang puppet the wrong way. “Being free is a must.” Suwarno does not demand much from his students. What’s important is that they have the courage to perform.

A puppeteering student may take creative liberties while performing as a dalang—especially to ensure that those in the audience understand the moral values that are being delivered. Today, not many young people understand the Javanese language used in wayang performances. “The dialogue is in krama inggil (high Javanese), the highest level of Javanese language,” said Suwarno.

Because of the language barrier, a dalang must explain the story and moral values in creative ways. A young dalang may, for example, use current analogies or get closer to the audience by inserting stories or moral values in the punakawan (humorous) scene, also known as the gara-gara scene.

To hone its students’ abilities, Sanggar Takir holds a parade every October, and all students are given the opportunity to perform. 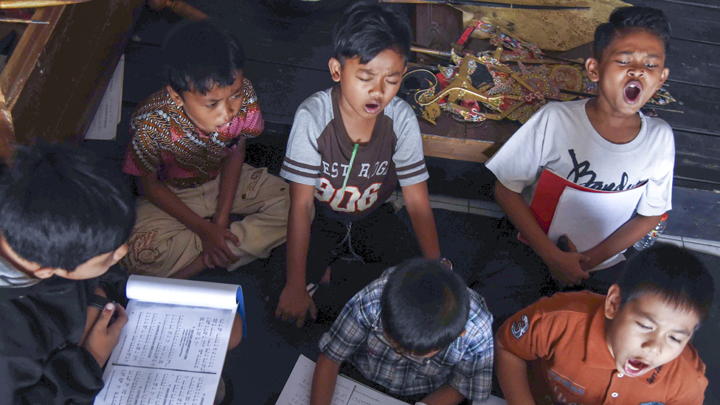 Because he has been teaching for such a long time, Suwarno has had a hand in producing many dalang, among others, Ki Ardhi Purbo Antono, who was chosen as the 2009 Indonesian Young Pioneer.

Ki Ardi became acquainted with wayang theater by coincidence. He learned karate while still in elementary school. At the same time, a group of students would practice performing the wayang. Young Ardi was intrigued by the sound of gamelan, karawitan and the performances of young puppeteers at Sanggar Senaputra, not far from where he practiced karate. “(I) quit karate and practiced puppeteering instead,” said the 38-year-old man.

But his career as a shadow puppeteer did not go smoothly. Although his father is a painter and would often take him to watch wayang performances, he did not allow Ki Ardi to continue his training at the Karawitan School in Surakarta. He wanted Ardi to continue his studies in Malang. But because of Ki Ardi’s passion, he continued to learn the art of puppeteering with Suwarno during his high school years. He also kept studying wayang as a dance major student at the Malang State University.

In the end, Ardhi did receive acknowledgment for his work as a dalang. He has received numerous invitations to perform as a puppeteer in various regions and still does to this day. He hopes that wayang will always be performed and that children can learn puppeteering since an early age. “If not us, then who?” he said.