The people of Riam Batu can now enjoy clean water from the nearby river. Together, they protect the forest to keep the clear water flowing.

GUEST are often surprised when they enter the bathroom at the back of Sebastianus Muntai’s home. Although the bathroom has planks of wood for its ceiling, it is clean and has ceramic tiles for the floor. Clear water continues to flow from a small hose, keeping two giant buckets almost always full. “It’ll shatter if (the water is) stopped,” said Muntai at the end of June. Muntai has only been the chief of Riam Batu village, for one year.

Despite the minor complication, Muntai’s family is thankful that water now flows into their home in the Lanjau Hamlet, Riam Batu—the village closest to the river’s source in the Sintang Regency, West Kalimantan. Sebastianus’ wife, Nila Kartika, remembers well how difficult it was before they had water two years ago. Nila and other Lanjau residents had to go to the Tempunak River to get water for various needs, from bathing, washing, to defecating. Meanwhile, for kitchen needs, such as cooking and washing dishware, the 34-year-old woman says she had to pay someone to retrieve water at Rp2,000 per bucket.

Yohana Fransisca (46) and Selvina (34) shared most of Nila’s experience, although Yohana did not have to pay for water because she lives only 15 meters away from the river.

To add to the complication, Lanjau residents could not go to the river any time they needed water—only in the morning or the afternoon. “During the day, the water was dirty,” said Yohana. “People would be looking for gold.”

Many Lanjau residents, and those from Riam Batu, earned additional income by trying their luck at searching for gold at the Tempunak River. Although they did not always find some, they would still go into the river after harvesting rubber or working in the field. “Because the income from working in the field wasn’t enough,” said Yohana. “At the most Rp3 million, but often less than Rp1 million (per month).”

Yohana and Selvina explained that they could not sell their crops to other regions. “Because of bad roads,” said Sevina. Roads leading from Riam Batu to the capital of Sintang Regency are indeed terrible: dirt roads riddled with holes, and often muddy. To reach the city of Sintang 77 kilometers away, Lanjau residents must travel three hours on two-wheelers or in double-axle vehicles if the weather permits.

But these days, the people of Lanjau need not rush to the river every morning. Clear river water now reaches their homes through pipes and tiny hoses. The water flows 24/7 to most homes because there are no valves. Locals only need to pay Rp15,000 per month to manage the water, which flows from the Telangis River. “(The cost) was only raised two months ago,” said Yohana at the end of June. Prior, Lanjau people only had to pay Rp10,000. 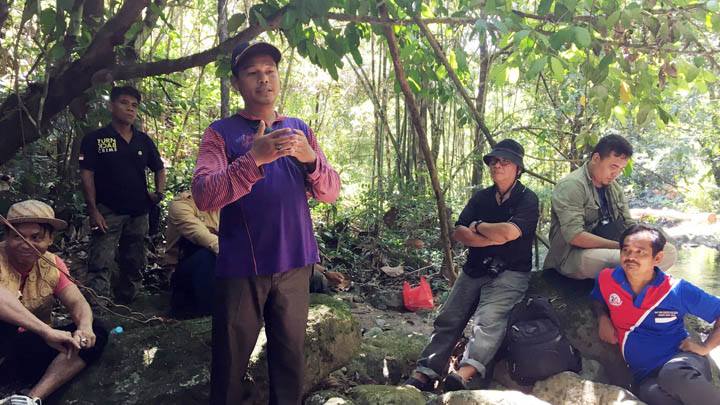 Yohana Fransisca, Selvina, Nila and others in Lanjau Hamlet, made up of 119 families, began moving away from the river in 2017. In 2016, the Riam Batu village government allocated money from the regency budget to build water pipes. They took water from the source of the Telangis River, located in the forested Saran Hill above Lanjau. “Construction was done by the people themselves, by working together,” said Sebastianus Muntai.

Those living in the two other hamlets in Riam Batu, i.e., Mulas and Lebuk Lantang, did not have to wait long before they, too, had water flowing to their homes. Mulas residents take their water from the Mulas River with assistance from the Keling Kumang Group and the Alliance of Indigenous Peoples of the Archipelago (AMAN). Meanwhile, Lebuk Lantang people retrieve their water from Rarak River, also located on the Saran Hill, with assistance from the West Kalimantan Green Economy Consortium comprising the Keling Kumang Group, West Kalimantan AMAN and the Millennium Challenge Account Indonesia.

Several managing groups were created to manage the flow of water. Every water-related decision is made by deliberating among members of the managing groups and communities, including the monthly fee. “The money is for maintenance and operations,” said Muntai.

Muntai says the hope is that the Indigenous Community Business Unit, which is currently in the making, will be able to manage the water. “About next year.”

The people of Lanjau, Mulas, and Lebuk Lantang, made up of 275 families,  can now enjoy the freedom to use water at home. “We’ve forgotten how to walk to the river,” Yohana joked.

The work of the government and the people of Riam Batu did not stop once they had water and electricity at home. “We have to keep the water clean and flowing abundantly,” said Muntai.

To achieve this goal, the rivers’ surroundings are kept protected, namely the Saran Hill’s forest areas. According to Sintang AMAN’s data, in Riam Batu, where the majority of the population are Seberuang indigenous community, there are 2,936 hectares of community forests inside the protected forest area. “Don’t allow forest destruction,” said Sebastianus Muntai. “If there’s damage, water sources are disrupted.”

Muntai told of the landslide that resulted in less water and the pollution of surrounding river water four years ago. “Apparently it used to be a field,” he said, adding that the people would clear land by burning. Riam Batu relies on crops and rubber.

The village government then invited community elders and the people to deliberate. In the end, several agreements were reached on how to protect the community forest. Among others, villagers can only clear land at a minimum distance of 500 meters from the river. “We plan to have a village regulation,” said Muntai. “Hopefully this year.”

Additionally, when someone is planning to clear land, the people are expected to inform water management. A prayer ritual is performed as a way to ask permission from the ancestors. Likewise, when a hamlet resident intends to gather wood to build a house. If they fail to inform the village or water management, a sanction will be given.

Prior, the Seberuang indigenous community had already created a customary law book that regulates various aspects, including those that have to do with the environment, among others, customary territory, land, forest, and ancestral land.

Now the people of Riam Batu are in the process to look for a recognition as an indigenous community as ruled by Sintang Regional Regulation No. 12/2015, and to get community forestry permit from the ministry of environment and forestry. “So that the people can fully manage and safeguard their forest,” said Antonius Antong, head of Sintang AMAN.