The people of Blora are demanding their share of the Cepu oil profits. At the height of its production, the Banyu Urip oil field is Indonesia’s biggest oil contributor.

The Cepu-Bojonegoro road used to be largely deserted. However, nowadays this middle route highway (of Java) is always bustling, especially after the Cepu Block is spewing out over one-quarter of Indonesia’s total crude oil production.

The busy traffic has become a daily occurrence. Throughout last week, heavy vehicles constantly roam the streets, made easier by the widening of the road to 12 meters.

However, not all of Cepu’s profit sharing flows evenly to the three surrounding regencies of Bojonegoro, Blora, and Tuban. Seno Margo, chairman of the Blora Civil Society Coalition, said that the Blora Regency has not received one penny of the profit sharing. “Not one rupiah has gone to us,” Seno said on Wednesday, September 4.

In fact, the Cepu project, managed by ExxonMobil, has become a primadona. The Upstream Oil and Gas Regulatory Task Force (SKK Migas) noted that Cepu’s Banyu Urip field produces 209,300 barrels of oil a day. That only comes second to the Rokan Block in Riau, which has a daily production of 209,400 barrels.

The profit sharing in Blora contrasts with that of neighboring Bojonegoro regency, which receives Rp2.668 trillion in this budget year. Meanwhile, the East Java provincial administration gets Rp1.509 trillion. These funds are distributed evenly across all non-oil producing regencies and cities like Banyuwangi, Bondowoso, Jember, Blitar, Trenggalek, Kediri, Ponorogo, Pacitan, Madiun, Magetan, and Ngawi.

Based on the allocation set by the government, every region will receive more than Rp81 billion. “Imagine, some far away area which has nothing to do with Cepu will get our benefits. And we don’t,” Seno said.

This is why the people from Blora are now fighting for what they say is their right. Blora Regent Djoko Nugroho and the local parliament support that plan. Local parliamentary support was voiced at its plenary session in Blora two weeks ago. The local legislators are in favor of the Civil Society Coalition’s submission of a judicial review regarding oil and gas profit sharing to the Constitutional Court and the Supreme Court.

Djoko said he has conveyed the people’s complaint to President Joko Widodo during the latter’s visit to Blora, and at other forums in which the two met. The message is clear: Blora Regency demands its share of the profits from Cepu Block’s oil and gas.

This point of contention is creeping towards a boiling point for the people of Blora, as the Cepu Block has reached its production peak. SKK Migas statistics show that as of August 31, Banyu Urip field’s production has exceeded 224,700 barrels a day. That is more than what is in the plan of development, which only estimated 165,000 barrels. Moreover, there will be additions from the Kedung Keris field, which is estimated to start production in the last quarter of this year and yield 3,800 barrels a day.

Kardaya Warnika, former head of upstream oil and gas business agency, said that the actions of the Blora people made sense. “It is impossible that the people of Blora do not get anything,” said this member of the House of Representatives’ (DPR) energy commission on September 5. He suggested a regulation audit, since the law gives rights to all production areas, not just the place where the well is located. 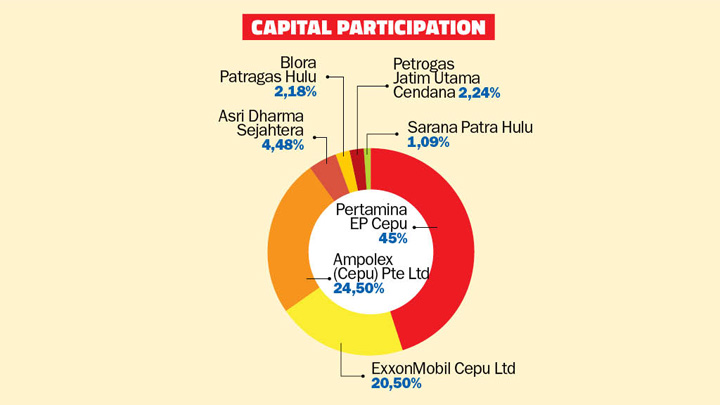 BLORA’S civil society is making its moves. An assessment team has been formed to prepare data for the judicial review. The data includes estimates of oil and gas reserves in the Cepu region, including wells located in a number of villages in the Gayam subdistrict in Bojonegoro, some 16 kilometers from the border of Central and East Java. “We aim to conclude and submit the judicial review document by the end of September,” Seno said.

The Coalition is asking for a review of at least three regulations, the first one being Law No. 55/2005 regarding proportional funds. The second one is an Energy and Mineral Ministerial Decision No. 8003K/80/MEM/2016 regarding the deter mination of production areas and the calculation of oil and gas profit sharing funds. The third is Finance Ministerial Regulation No. 187/2016 regarding fund management and transfer to regions and village funds.

Finance ministry spokesman Nufransa Wira Sakti explained that determining oil and gas profit sharing is based on the location of the wellhead. This policy is based on an energy ministry regulation. “Cepu Block’s wellhead is in the Bojonegoro region, not in Blora. Thus, the production area according to the regulation is Bojonegoro.”

Agus Cahyono, the energy ministry’s head of data and technology information, confirmed that the profit sharing calculation is based on the wellhead location. “The Cepu Block is vast. Reviews show that the most effective and efficient way is to drill in Bojonegoro,” said Agus, who was the energy ministry’s subdirectorate head of state receipts from 2006 to 2013.

Agus reassured that the government is paying attention to Cepu, among others by giving a participating interest to the Blora Regency administration. The Cepu Block is set as an example for the policy of giving 10 percent ownership to the region. However, Agus could not explain on what the participating interest determination is based on. “That is the consortium of that region’s state-owned companies, business to business among regions. I don’t know the details.”

Andang Bachtiar, former chairman of the Indonesian Geology Experts’ Association (IAGI), said the current policy regulating participating interest stems from IAGI’s input. “At that time, we were asked by the government and parliament to do a study,” he said on September 5.

He further said that there was no legal umbrella regulating participating interests. The Bojonegoro administration wanted to control the whole 10 percent allotted to the region. Bojonegoro has set up a regional-owned enterprise in partnership with private parties. The East Java and Blora administrations, meanwhile, are also demanding their share.

IAGI geologists from Central Java, Yogyakarta’s Special Region, and East Java finally gathered to discuss this issue. At the time, Andang was IAGI chair. He was also consultant to the association of oil and gas producing regencies and cities. The IAGI used the unitization approach, which is often used in the oil and gas branch. This concept stipulates that should a reservoir pass through two locations, apportionment is done based on reserves.

This reasoning, Andang explained, is based on reservoir data from Humpuss, who was the Cepu field’s first managers, before handing it over to Ampolex, and then Mobil Oil. “Whether it is drilled or not, the main thing is that it can be proven that the reservoir is connected.” Susilo Bambang Yudhoyono, who was president at the time, accepted IAGI’s reasoning.

Marwan Batubara, who was Regional Representatives Council (DPD) member between 2009 and 2014, questioned why this study was accepted by the president, but not used in determining profit sharing. Marwan confirmed that he had received complaints about Cepu when he was in the DPD. “The profit sharing regulations are too simple in giving it to the wellhead region.”

Andang said that this has to do with policy seesaws. Bangka Belitung, for example, which does not have any wellheads, still receives profit sharing funds from contractors operating in the area like CNOOC. “The central government has a veto right,” Andang said.