Several bamboo varieties are used to revive a plot of land in critical condition, formerly the site of illegal goldmining, in Dharmasraya, West Sumatra. Besides being good for re-greening, bamboo absorbs mercury.

THOUSANDS of bamboo trees about 1.5 meters tall stand in rows some five meters away from the banks of the Nyunyo River in Jorong Bukit Mendawa, Nagari Tebing Tinggi, Dharmasraya Regency, West Sumatra. The bamboo trees were deliberately planted as starter vegetation to resuscitate a plot of land formerly used as an unregistered goldmine owned by the community.

“The ravaged land has to be revived back immediately so it can be used as a tourist destination and for developing local businesses,” said Dharmasraya Regent, Sutan Riska Tuanku Kerajaan, when visiting the site on Tuesday, July 16.

Restoration efforts for the plot formerly used as an illegal goldmine is conducted by the Dharmasraya Regency administration in conjunction with the ministry of environment and forestry, a construction service company, Nagari Tebing Tinggi community stakeholders, and the local people. The first phase of the reclamation is carried out on a 3.8-hectare plot. The environment ministry funded the initiative.

Bamboo planting, said Mamik, was conducted during the rainy season in November 2018. Some 3,200 bamboo cuttings were planted. She said bamboo was deliberately chosen for the reclamation for its effective reforestation properties which help combat erosion, maintain the riverbank, and boost the forest’s hydrological function. Bamboo also provides natural remedial properties for ground devastated by heavy metals. One last reason: bamboo grows rapidly and can survive in earth degraded by mining activities.

Mamik hopes the bamboo will later be cultivated and create economic empowerment for the local community. Similarly, Sutan Riska hoped the land recovery initiative will create new employment opportunities for residents in the vicinity. “The former wildcat miners can once again seek a livelihood on the plot while no longer degrading it,” said Sutan Riska.

The Nyunyo River was the focal point for unregistered illegal goldmining since 2005. The community abandoned their plantations and nurseries to pan for gold in the river and surroundings. Rubber plantations nearby was devastated because the land was also hoed. The goldmine was only five kilometers away from the trans-Sumatra thoroughfare at the Nagari Tebing Tinggi crossroads. The former goldmine sprawled over some 300 hectares of land.

Before recovery was begun, the area was pockmarked with tunnels which had filled with water and were overgrown by bushy weeds. The riverbed had blurred because of the mining activities. The environment ministry categorized the area as critically damaged land. According to Mamik water samples from the river tested on July 18, 2016, showed mercury (Hg) levels at 1.6 milligrams per liter. The safety standard for mercury is at 0.002 milligram per liter.

Elizabeth A. Widjaja, former head researcher of the biology research center of the Indonesian Institute of Sciences, said bamboo, usually used to stop erosion and to conserve ground water, can indeed be used to resuscitate land degraded by pollutants. Elizabeth, Indonesia’s lone expert in bamboo taxonomy, pointed to research done in Kenya where bamboo was used as a remedial plant to clean up chromium (Cr) pollution in the vicinity of a leather-curing factory.

Chromium as an element is normally used to process leather. Research led by Faridah Hussein Were of the chemistry department at the University of Nairobi, showed the ground in the factory’s vicinity contained high levels of chromium at 1.337-3.398 milligrams per kilogram. Control levels of chromium in the ground should be at 0.20-2.34 milligrams per kilogram. It turned out, of the six bamboo species planted in the factory’s vicinity, five species had a survival rate of 100 percent. The survival rate of the last species, Dendrocalamus birmanicus, was 83.3 percent.

According to Elizabeth, who named 80 of the 176 bamboo species known in Indonesia to date, any bamboo can be used to absorb pollutants. “Bamboo in principle has a capillary characteristic. It absorbs any pollutant on the ground through its roots, and carbon dioxide or any pollutant in the air through its leaves,” said Elizabeth, known widely as the ‘Bamboo Professor’. “These pollutants are metabolized in the bamboo’s trunk, and then regurgitated in the form of fresh water and also oxygen.” 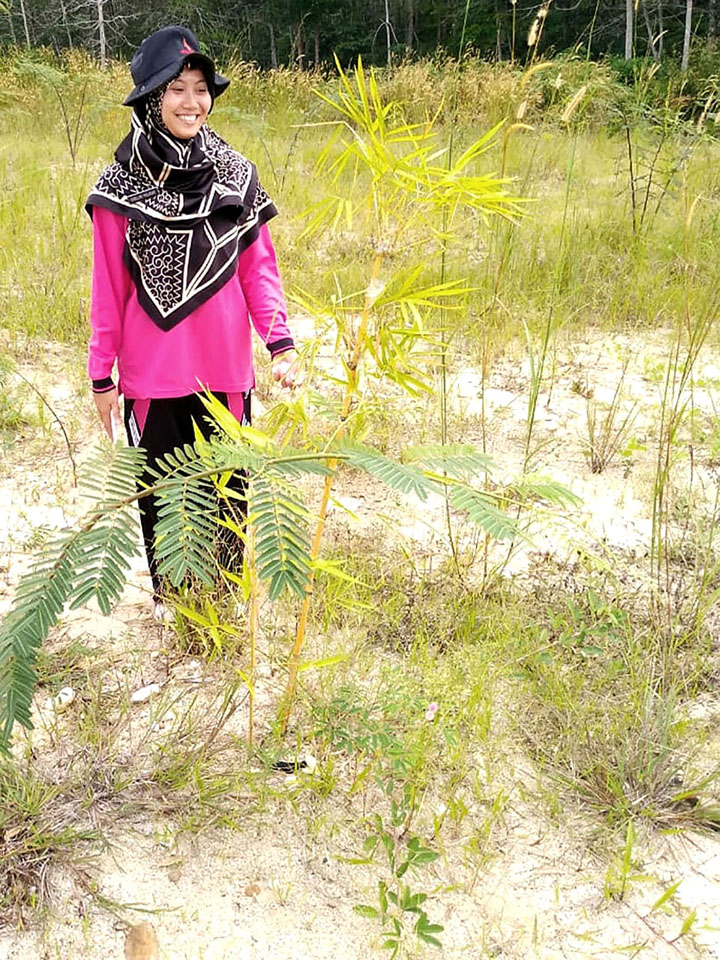 Elizabeth related her own experience planting bamboo at the Bukit Asam coal mining plot in Lampung four years ago. Planting the bamboo aimed at re-greening the area which had turned hot and arid. “Originally, the area around the office was extremely hot, now it’s so much cooler,” she said.

Bamboo is also planted in former coal dumps, on the margins of rail tracks, and on beaches. “I strongly suggest planting it in former mining areas to develop long-term products, because bamboo can be made into briquettes,” said Elizabeth, who added information that at Krakatau Steel, Cilegon, Banten, bamboo briquettes are now used to lessen the country’s dependency on coal.

In the land recovery initiative on the banks of the Nyunyo River, said Mamik, nine species of bamboo were planted, including betung, black betung, Balinese panda, Chinese aur, talang, green talang, ori and the ampel species. “Some of the trees have now grown thick bushes of leaves,” she said pointing to a photograph of the yellow-colored Balinese panda bamboo grove on the reclamation spot near the Nyunyo River.

Mamik admits that no conclusion can yet be made on the effectivity of the bamboo groves to reduce pollutants, namely the mercury polluting the ground and water in the former illegal mining site. “The bamboo is only newly planted. We need scientific research to know whether they’ve been effective or not.”

A sample taken from the Nyunyo River on November 4, 2018, showed mercury levels were at less than 0.0006 milligrams per liter, in other words a declination when compared to 2016. “This could also be because the river flow had swept away the contaminated sedimentation and that circulation had occurred,” she said.

The Dharmasraya administration is determined to recover the critically damaged land surrounding the river tributary from the mighty Batanghari River. They expended a regional budget from a leftover budget from a reforestation profit-sharing fund amounting to Rp900 million to begin the second land recovery phase of the former illegal mining area, on a plot of 4.5 hectares. “We are currently in the land preparation stage,” said Regent Sutan Riska.

The land under recovery will eventually become the Dharmasraya Eco Edu Green Park. The green park scheme is aimed at becoming an environment-friendly tourism and education destination, a place where school-children can study about the devastating effects of rampant, unchecked mining.