Nazir Foead, Head of Peatland Restoration Agency: 90 Percent of the Fires Was Intentional


After seeing a decline in severe incidents of forest and land clearing fires in the past three years, parts of Sumatra and Kalimantan are once again smothered by toxic smoke. The National Disaster Mitigation Agency (BNPB) has chalked the thick smoke up to the near lack of rain and the massive expanse of peatland being on fire.

FINGERS were immediately pointed at the Peatland Restoration Agency (BRG), a non-structural agency set up by President Joko Widodo in 2015 in the wake of the devastating forest fire—the worst ecological disaster since 1997—which destroyed 2.67 million hectares of peatland and caused Rp221 trillion in losses. The agency was tasked to rewet the 2.5 million hectares parched peatlands in seven provinces across Sumatra, Kalimantan and Papua, to prevent the repeat of the disaster. With the mandate until 2020, the agency has so far restored 679,000 hectares.

It now seems the agency’s three years’ worth of work has also gone up in smoke. The BNPB stated that the fire has razed around 27 percent of the peatlands in Sumatra and Kalimantan or 89,000 of the total 328,000 hectares as per the end of August. The number is not a far cry from the 29 percent of the 2015 inferno. Many environmental institutions view the agency a failure. Nazir Foead, BRG’s chief, begged to differ. “The restoration helped minimize the fires but the ones that were not yet restored burned too ferociously,” Nazir, 52, said in a special interview with Tempo last Thursday.

In between his frenzied schedule due to the haze emergency, Nazir sat down with Tempo’s Stefanus Pramono, Reza Maulana and Aisha Shaidra at a Kuningan cafe in Central Jakarta. In the interview that went on for over two hours, the former director of conversation for WWF Indonesia explained the complexity in fixing the peatland ecosystems, his anger at perpetrators behind the fires and his dream to drive economic activities in the peatlands. “If economic activities run well, people won’t be tempted to burn the lands,” reasoned the forestry graduate of the Gadjah Mada University, Yogyakarta. Excerpts:

Some environmental institutions view that the 2019 haze disaster cannot be separated from the failure in restoring the peatlands. What is your response?

I disagree. I reiterate that the data shows few hotspots in the areas that we have restored. So, the restoration helped minimize the fires but the ones that were not yet restored burned too ferociously.

In reality, the percentage of the burned peatland is not very different from that of the 2015 disaster.

Yes, we have to acknowledge that the progress has not been optimal, however, there is no fire at all in the areas where we intervened. For example, in Riau, we prepared data tabulations for each village complete with the location of canals, canal partitions and the description of the burned areas. On average, 30 percent of it was almost burned and the remaining 70 percent was not. So, the comparison is one to two. The burned areas were also located only in the outskirts of villages they share the borders with.

Two percent of the total area targeted for restoration.

How crucial is peat in the land fires?

Unquestionably crucial. Three years ago, I consulted with an American forest fire expert. Throughout his career in America, he said he only dealt with wildfires. There, when there are peatland fires, only the melting snow in spring—around April—can extinguish them. Similar to downpours in Indonesia. Meanwhile, fires usually break out in July-August. So, they have to wait for eight months. In fact, the thickness of their peat layer is only about three meters. Compare it to ours which has tens of meters in thickness

I asked him about that and he laughed. He said that it served only to give the impression that the personnel were working, (laughs)...Aerial bombing only douses the surface fire but the fire continues to burn underneath.

Does it mean the government’s planned artificial rain will be futile?

No, as long as it is heavy. It also depends on how long the areas have been burning. It will be able to put out newly ignited fires but beyond that, we would still need manual extinguishing which involves keeping the nozzle of the hose underground and spraying the ground. One can also water the ground the usual way but taking several minutes in each patch of land.

There are reports saying that the hotspots originated in oil palm plantations. How come?

What does the peatland restoration agency think started the fire?

Pak Doni (BNPB Chief Doni Monardo) said that 99 percent was caused by humans. I say 90 percent of the fires was intentional and only nine percent was accidental as per the finding of the coordination meeting with the BNPB participated by peat and forest fire experts last April.

Were they intentionally set to clear land?

Yes. What’s worse is they were done by tycoons, because the fires are massive.

Do you know their identities?

Wait and see who plant there later. They are people with influence, either economically or politically. They have the capital to mobilize certain number of people to simultaneously torch hundreds of hectares of lands. We have to find the perpetrators including their financial sponsors. Who are they? The police have more information.

In reality, many investigations and lawsuits against these suspects are dropped.

The President is quite serious about the issue. The perpetrators must be charged legally, civilly and administratively. By all three laws, not just one, to create deterrent effects. So, they must be jailed, fined and their business permit revoked. I propose to add one more: blacklist them from banking activities so that once out of jail, they can no longer do business.

Why should they be sued under multiple laws?

We need extreme measures as we are facing increasingly drier climate. The El Nino and the Indian Ocean Dipole draw moisture away from our territory. I am convinced that humans caused the forest fires. As long as there are arsonists, fires will recur even in restored areas. Therefore, serious law enforcement is the key.

With the mandate ending by the end of 2020, why does the agency still fall behind the restoration target of 2.67 million hectares?

That total is divided into three categories: 1.7 million hectares of concession land, 688,000 of protected forests and non-concession lands, and around 200,000-hectare conservation zone. For the last two categories, we have rewetted 679,000 hectares—around 70 percent. Meanwhile, it is companies’ responsibility to restore their concession lands. The number is again divided into 1.2-million-hectare industrial plantation forest and about 500,000 hectares on oil palm plantation use rights. For the latter, we have trained and inspected restoration works in around 60 percent of the total areas. The remaining 1.2 million hectares is under the jurisdiction of the environment and forestry ministry (KLHK). The number of hectares under BRG’s watch is indeed smaller.

Why is oversight not under one roof?

For the time being, we entrust it to the environment and forestry ministry. Our resources are limited.

How much budget and how many personnel does the agency have?

We have 116 state civil officials and an annual budget of Rp230 billion. Most of the funds goes into infrastructure.

What kind of infrastructure?

Construction of canal partitions. Our peatlands are filled with so many canals. Some were made in the early 80s during the transmigration period under the New Order regime. Pak Harto (President Suharto) wanted to drain the lands and turn them into paddy fields. Some were built by oil palm plantation companies for transportation. The locals also built canals to irrigate the rice fields. The canals dry out the peatland during the dry season. Therefore, the President has asked to build partitions.

How effective is this method?

The most effective of all because many peatlands in Indonesia receive water from rain only. So, when there are too many canals, the water is automatically drained out during the dry season. We also drilled wells. We learned this from farmers whose lands were spared from being burned down although they were engulfed by fires in the 2015 catastrophe. We made wells in the locations where there are no canals to provide water in case of fire.

How long does it take to rehabilitate a peat forest?

After that, will it return to normal?

No. It will not yet return to the shape of a peat forest but only the moisture will be restored in the soil.

So, when can we see the peat forest again in the damaged areas?

It depends on the extent of the damage which is measured from the time the drying process began, not the time of the fires. The peatlands in Indonesia have been drained out in the last 40 years. First canal partitions were built only around 2018. It takes 10 years for the peat to regain moisture. People will replant on cultivation lands as soon as the soil becomes moist and look after the lands. For conservation areas, perhaps it will take 100 years to be able to grow plants again.

Can these calculations change when there are land clearings?

Indonesia’s deforestation rate has fallen in the past two to three years. It is quite a laudable progress given the previous upward trend. Deforestation in Brazil, for instance, has actually climbed.

But logging still continues due to new concessions.

No more new concessions. The moratorium on logging in primary forests and peatlands are still in force, you see.

Environmental conservation has always been in conflict with economic activities. How can we create a middle ground?

I propose peat-friendly land development and investments. We are preparing a business model.

For example, snakehead fish farming. Pak Doni Monardo often said that the fish which possesses high level of albumin (the protein that regulates blood pressure), can live in the peat. We can also cultivate sago. We are still calculating: starting from investment needed per hectare, to how long it will take to reach break-even points, and so on. I also dream of building a biomass power plant using plantation waste as fuel. The ashes left behind by the fire are used by farmers to increase the acidity of the peat soil. So, there will be zero waste. Restoration without building the economy will not bear fruits. People will always go back to burning. 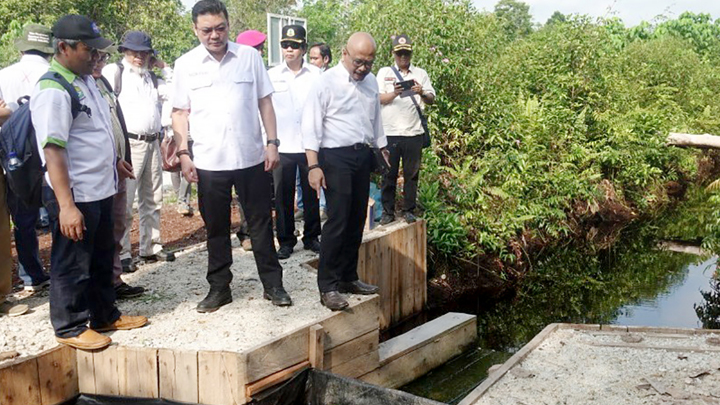 There are accusations that the regional governments were slow in mitigating the fires as well as the haze disaster. Do you share this view?

I can only talk about the peatland restoration which is much better this year compared to the last year, before the simultaneous regional head elections. Many regional governments were hesitant to work with us citing the heavy workload they already had. Some were afraid of getting into troubles with the audit agency and the prosecutor’s office. We didn’t have personnel in the regions so we borrowed them from the regional governments. We provided technical, administrative and financial assistance. Things are already better in the following year.

How are the results?

Some are good, some are not. Ideally, we should have task forces and vertical organizations in the regions. Indonesia has the second largest peatland in the world and consequently its contribution to the climate change is huge. So, the agency should be a strong institution with strong authority.

How likely is the institution to continue?

That will be discussed. We hope it will.