Indonesia’s Diplomacy and the Paintings of Mohammad Toha


THE directorate of culture at the ministry of education and culture launched a new book titled Art & Diplomacy on August 17. The book contains rare pictures from the independence movement taken by photographers under IPPHOS—the nation’s very first photojournalism news agency—and posters, caricatures and cartoons created by artists of the day. 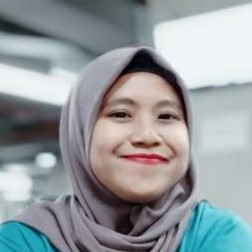 The pictures selected provide evidence how many of the important negotiations conducted by Sukarno and colleagues, and many other revolutionary moments, often occurred in rooms decorated with works by some of our most famous artists, such as Basoeki Abdullah. The book also gives witness that young artists under the ward of artist Dullah, such as Mohammad Toha Adimidjojo, was involved in battles such as in Yogyakarta by making paintings. Tempo discussed the book with art critic, Agus Dermawan T., based on his interviews with Dullah and Toha. This is the story behind Toha’s paintings.

Sunday, December 19, 1948. Mohammad Toha Adimidjojo was only 11 when that day at dawn his town, Yogyakarta, was ransacked by the Dutch. The attack was commanded by Lieut. Gen. Simon Hendrik Spoor, the highest-ranking Dutch officer in Indonesia. Spoor implemented Operatie Kraai or Operation Crow, later known as the Dutch Military Aggression II. His mission: to take over Yogyakarta, the capital, and capture President Sukarno.

That Sunday morning, the Dutch crippled the Maguwo Air Base in Yogyakarta. A total 128 out of 150 Indonesian soldiers died, injecting the troop led by Lieut. Col. van Beek with confidence as they marched to the Gedung Agung (Grand Hall), south of Jalan Malioboro. Van Beek then declared Sukarno under house arrest.

The melee that day did not make little Toha stay at home. With the whistle of bullets and the smell of gunpowder around him, the boy tramped around Yogyakarta to sketch what he was witnessing. He had some drawing paper, a pencil, brushes, some pigments. With these meager supplies, the young artist made more than 60 paintings in four days. He painted the convoy of Dutch jeeps taking Sukarno and Vice President Mohammad Hatta, Sutan Sjahrir, and Foreign Minister Agus Salim away. The convoy on December 22, 1948, headed towards the Maguwo Air Base to fly them out and have them exiled in Sumatra. 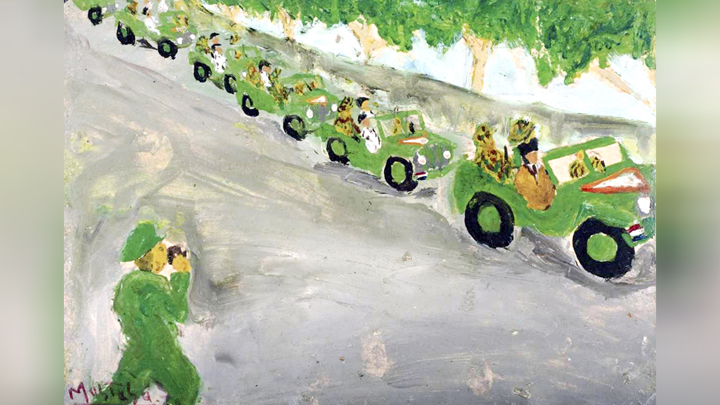 The cleansing of the Lempuyangan marketplace by dutch soldiers painted by Toha, with his father is depicted sitting in a blue shirt./Rijksmuseum doc./

Toha recorded the event with oil paints on a piece of paper measuring 17,1 x 24,2 centimeters. Not only did the youngster’s eye notice the Indonesian leaders being hoisted out by the queue of olive green vehicles, he also captured a photographer in military uniform and a green beret taking pictures of Sukarno’s convoy. “Toha’s painting is a factual record. His painting is irreplaceable by any other artwork or photograph,” said curator and lecturer of art management at the Indonesian Art Institute Yogyakarta, Mikke Susanto.

This is the reason why Toha’s painting was selected for the book cover of Art & Diplomacy, which came out on August 17, in commemoration of Indonesia’s Independence. The book was initiated by the directorate of culture at the ministry of education and culture with the curatorial team of the Antara Photojournalism Gallery headed by Oscar Motuloh. Mikke did the research for the material put on exhibition at the Antara Gallery and the National Library, Jakarta, August 15-21. Aside from photographs and paintings, the exhibition also displayed books, newspapers, magazines, comics, murals, and other memorabilia, with music and a documentary film. These many items are the media of the nation’s collective memory about Indonesian diplomacy between 1945-1950.

Toha, said Mikke, was a shining star in his depiction of the second Dutch Military Aggression. “In painterly terms, his work is artistic. From a political sense, Toha’s work is historical,” he said. This is one of the reasons the Rijksmuseum in Amsterdam owns a collection of his paintings and had conducted an exhibition of 45 of Toha’s work at the Legermuseum, Delft, in 1992.

Toha’s paintings are important, because as the second Dutch Military Aggression ensued, most of the artists in the Young Artists Commune (SIM) had run from Yogyakarta. Dullah on the other hand recklessly had five of his young painters, Toha, Muhammad Affandi (12), Sardjito (14), Sri Suwarno (14), and F.X. Soepono Siswosoeharto (15), paint from the war front. Each they did their rounds, sometimes covertly, to document the military action in sketch form. 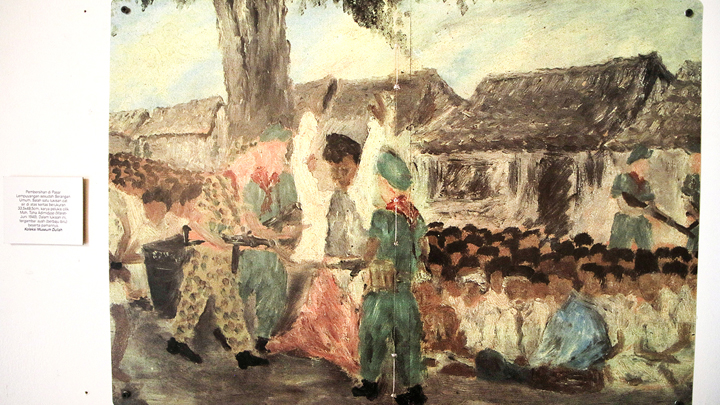 After making them, Toha and his chums would leave their work in Dullah’s care. The teacher stored the works as if they were precious art in the eaves of his ceiling. He did not want the Dutch to find them in a raid.

Besides the painting of Sukarno’s exile convoy, several other works by Toha in Art & Diplomacy was displayed in the exhibition. One work depicts Lempuyangan Market being cleaned up after the March 1, 1949 General Attack.

Mikke deduced that Toha and friends were there at the battle front because Dullah wished to join the war effort in his own way. “It was also a camouflage, because Pak Dullah through the youngsters would not be suspected of documenting the war through his art,” he said. While living in Solo, Dullah was imprisoned by the Dutch. He managed to run away and ended up in Yogyakarta. A good fried introduced him to Sukarno and two artists who eventually became his mentors, S. Sudjojono and Affandi. In Yogyakarta, Dullah began accepting students from many regions. “He loved teaching,” said Mikke.

OSCAR Motuloh, the curator of Art & Diplomacy, related how this was the fourth year running that the Antara Photojournalism Gallery launched a book portraying Indonesia’s history. In previous years, the Gallery published books about the Independence struggle, Indonesia’s freedom and the leadership of seven presidents. This year’s book aims to record the convoluted efforts the nation made through diplomacy after the 1945 Proclamation.

One year before the first book was published, the Antara Photojournalism Gallery was offered a collaboration by the Bronbeek Museum in Arnhem, Holland. Bronbeek is dedicated to material about the Royal Dutch East Army (KNIL). Oscar said many descendants of KNIL soldiers in Arnhem wondered about their grandfathers’ role in Indonesia. “They wanted to see the Indonesian point of view,” said Oscar. 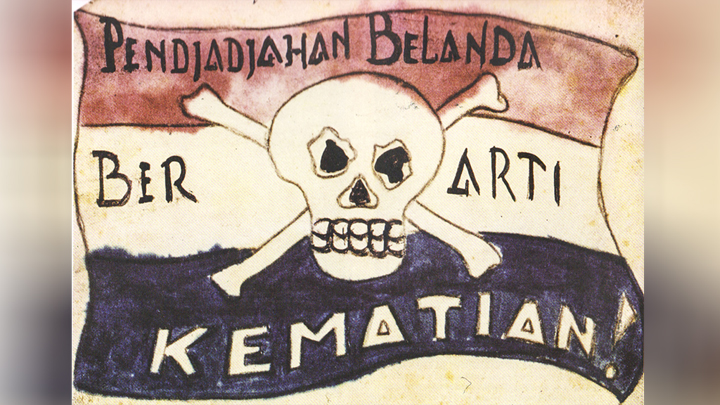 Bronbeek then held a major exhibition for a year, displaying a collection of Indonesia Press Photo Service (IPPHOS) photos—IPPHOS being the first photojournalism agency in Indonesia founded on October 2, 1946, by the Mendur brothers and friends. IPPHOS diligently kept a photographic record of the political turmoil of those days.

IPPHOS publication rights are held by Antara, making it easy for Bronbeek to access any photos they liked. Bronbeek bartered these with a collection of previously unpublished photos of Indonesian interest.

Bronbeek curator, Hans van den Akker, said, “These were important photographs because they provided a more inclusive look at history from the Indonesian perspective, about the war and the decolonization process.”

Besides Bronbeek, the Rijksmuseum also offered an exchange of historical photography. They lent a photo album of the historical Roundtable Conference. This material is an appendix in Art & Diplomacy. “We produced it much like the original album from the Rijksmuseum to enrich the visual history of today’s young people,” he said.

Most of the photos of the Roundtable Conference in the book have never before been published here, and highlight another side of the conference, including the décor of the meeting room, Vice President Hatta arriving at Schiphol Airport and being received by Minister J.H. van Maarseveen, the visits made by the Indonesian delegates outside conference hours, such as Hatta and colleagues going on foot to the Rijksmuseum, Rotterdam City Hall and the Heerlen mines. 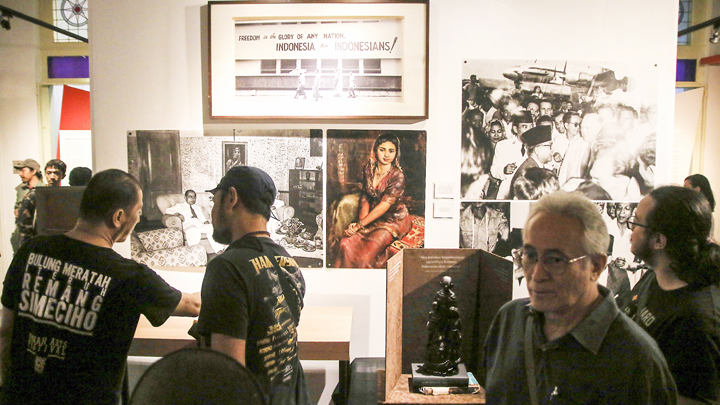 ART & Diplomacy also depicts many caricatures, graffiti, posters and ballyhoos created by Indonesian artists during the war years. “The posters kept the community united in the struggle to maintain freedom,” said Mikke Susanto.

Art & Diplomacy also shows the art around the Sukarno-Hatta duet. “Sukarno and Hatta each had their own artistic instincts and tastes, represented by the work of various artists,” said Oscar. Sukarno long had a penchant for visual art. He loved eccentricity and symbolic pieces and was not averse to nudity.

A painting by Affandi titled Laskar Rakjat Mengatur Siasat (People’s Army Preparing Tactics) is a case in point. When being herded out of the Palace by Dutch soldiers to be flown from the Maguwo Air Base into exile on December 22, 1949, Sukarno and his aide deliberately walked through the room where the Affandi piece hung to make a point. “Sukarno loved putting paintings and photographs of himself in locations that could be used as background for the IPPHOS photographers,” said Oscar. 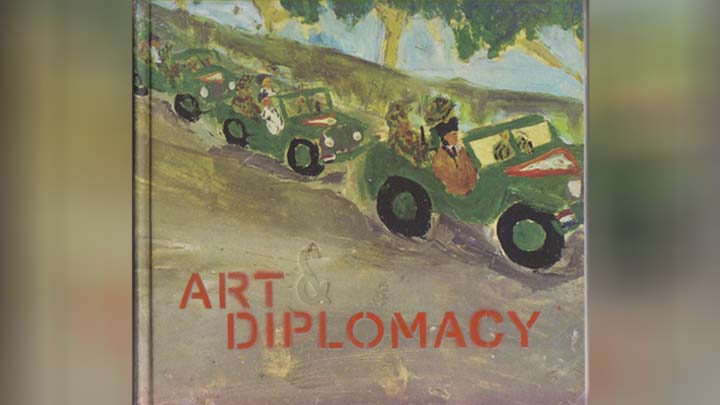 This symbolic communication is obvious in the way he allowed foreign journalists to interview him after the British Allied Army and the NICA had landed in Indonesia. The interview was held with Henk Ngantung’s Memanah as background.

Hatta became infected with this penchant for art, also, said Oscar. Hatta himself loved panoramic paintings. He collected pieces by Ernest Dezentjé, a Dutch-Indonesian artist. He treasured a painting he received from Basoeki Abdullah depicting a cowherd and three buffalo tilling the land. These paintings are now in the care of his three daughters.

Compared to Sukarno, Hatta’s art collection is meager. According to Oscar, Hatta was a straight and decent man, who as a result did not have much money to buy art. Sukarno, on the other hand, who also had no money, could cajole and convince artists to give him their work for free. Hatta owned one portrait of himself by Basoeki Abdullah, painted by the artist while in Den Haag, Holland, during the deliberations of the Roundtable Conference.

Basoeki also painted Hatta’s wife, Rahmi Rachim. While the portrait of Hatta was given to the Vice President for free, Basoeki offered the illustration of Rahmi for a price. Hatta was forced to admit he had no money to buy it. He asked Basoeki to keep the painting for him and promised to buy it off him one day after he had saved up enough cash. Three years later, Hatta still had no luck with the work. “Basoeki told him the painting had been purchased by a Spaniard. No one knows where the painting is now,” said Oscar.