The 12th Tarsier of Togean


It took more than a quarter century to ascertain that the tarsier found on the Togean islands is a completely new species. It was named Tarsius niemitzi in honor of ‘the father of tarsier biology’.

ANIMAL behavioral specialist Carsten Niemitz in 1991 had suspected that the tarsier he saw on the Togean islands in Central Sulawesi was taxonomically different from other tarsier species. The German scientist, widely regarded as ‘the father of tarsier biology’, and his student, Alexandra Nietsch, subsequently conducted a field research there. The findings summarized in the paper titled Diversity of Sulawesi Tarsiers were published in 1993.

But it would take more than a quarter century for tarsier researchers to validate his assumption. The most recent study published in the Primate Conservation journal on September 18 studied vocals or recorded sounds and genetics of Sulawesi tarsiers.

Myron Shekelle, a researcher with the anthropology department of Western Washington University, US, who is also the lead author of the study titled A New Tarsier Species from the Togean Islands of Central Sulawesi, Indonesia recorded the sounds of 11 tarsier species on Sulawesi and its surrounding islands and then compared them with the recorded sounds of the Togean tarsier. “Their duet is structurally simple, possibly the simplest of all known tarsier duets,” Shekelle writes in his paper.

Duet is a sound produced by a pair of tarsiers in the morning and the evening—before sunrise and after sunset to be exact, to call others to gather at a certain location or as a sign to mark the boundary of their family territory.

Besides through duets, tarsiers also communicate one another by calling sounds as well as distress sound. Calls are made by an individual tarsier when it is at a location far from its group whereas a distress sound is made when one is in danger or under threat. “One voice calling for females followed by two or three voices calling for males,” Shekelle wrote.

Via genetic testing carried out to supplement morphological, ecological and vocal tests, Shekelle’s research confirmed that Tarsius niemitzi is a monophyletic group, or a clade, which is a taxonomic group of descendants coming from a common ancestor.

To honor Carsten Niemitz, Shekelle and his team gave the Togean tarsier a scientific name of Tarsius niemitzi. The world’s smallest primate the size of a human adult’s fist became the 12th tarsier of Sulawesi and its surrounding islands.

Two years ago, Shekelle and the team named and presented two Sulawesi tarsiers (the 10th and the 11th species), namely Tarsius spectrumgurskyae from Manado and Tarsius supriatnai from Gorontalo in his paper published in the May 2017 edition of the Primate Conservation. In total, Indonesia has 13 tarsier species including Cephalopachus bancacus (formerly Tarsius bancacus) found in Sumatra and Kalimantan.

Ibnu Maryanto, a mammal researcher with the zoology research center of the Indonesian Institute of Sciences, was Shekelle’s partner in the Togean tarsier study initiated in 2000 and conducted the morphological test.

He compared the male tarsier specimens stored in the Bogoriense Zoologicum Museum in Cibinong, West Java, since 2009 with the collections from other museums around the world. “The morphology is very different, from the shape of the skull, the proportion of the tail tuft air to the body hair,” Ibnu said in his office in Cibinong Science Center last September.

He further explained that the tail of the male Tarsius niemitzi was around 262 millimeters in length and that 47-50 percent of it was covered with hair, as measured from the tip of the tail. Shekelle described the 12th tarsier species as having a dark skin tone like the Tarsius dentatus and dark brown body and tail hair and dark grey facial hair. A male creature weighs between 125 to 128 grams while a female from 104-110 grams.

Tarsius niemitzi is endemic to the Togean islands, except the Unauna island. Besides the Togean islands, the primate is also found in Batudaka, Malenge, Dolong and Waleabani islands. Agus Salim, a researcher at the Hatfield Indonesia-an environmental consulting firm—who was also involved in the study—said that they could not yet estimate the Tarsius niemitzi population. “We don’t have many transacts (survey paths) on these islands and their habitat density has not been analyzed,” said Agus, who designed surveys and processed spatial and analysis data.

Agus added that this newly identified species can also be found in plantations or fields and shrubs in addition to dense forests. “So, there are still many as long as locals don’t eat them as tola-tola,” he said. Tola-tola is a Minahasa term for refreshments for gathering. Poaching is one of the biggest threats to tarsier conservation. However, the International Union for Conservation of Nature (IUCN) in 2000 categorized Tarsius niemitzi as a least concern species. 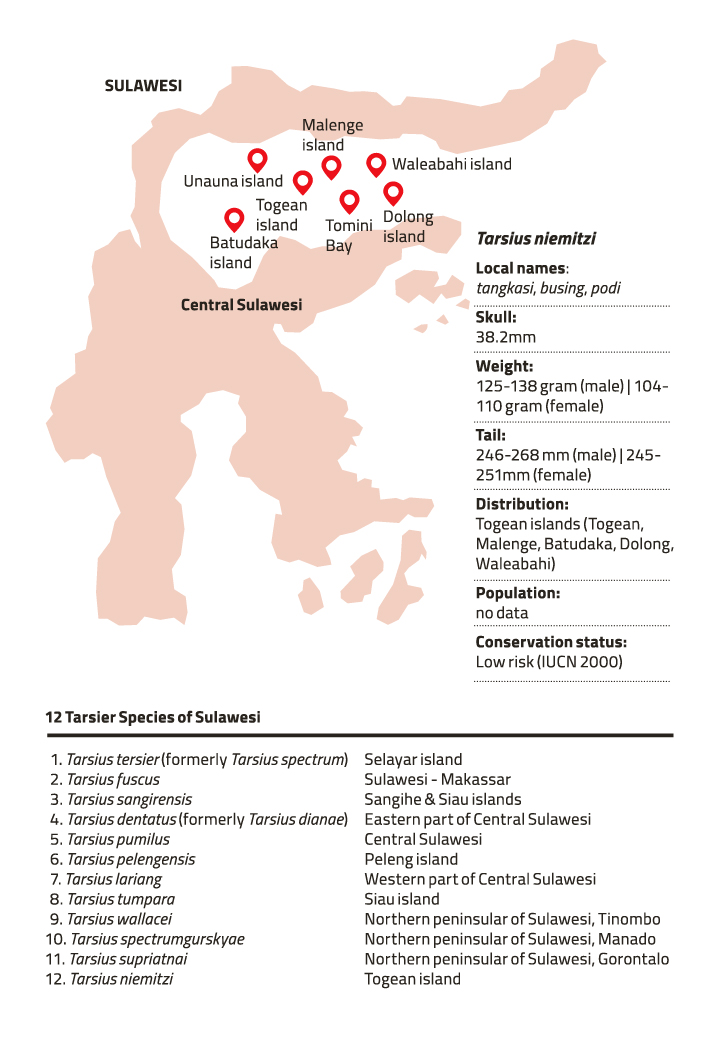