THE ivory hornbill or rangkong is a symbol of courage and bravery for Dayak community in Kalimantan. The bird is also considered a protector, and acts as the bridge which connects the souls of their ancestors with the Dayaks. Despite this, in the past three years, the population of the ivory rangkong has depleted alarmingly. In 2015, international conservation organizations announced its status as critically endangered.

A GROUP of several researchers and Tempo began an exploration of the jungle surrounding Segitak village, in the Kapuas Hulu regency, West Kalimantan, on Sunday, September 29.  During more than two hours of our trek into the forest, we could hear all manner of birds chirping and cheeping and cawing and whistling in turn. The twitter of the birds was like a wonderful concert of nature deep in the jungles of Kalimantan.

Yet, among all the sounds of those birds, said the researchers, the sound of the ivory hornbill (Rhinoplax vigil) could not be detected. The trek into the forest to have a peek at the ivory hornbill’s habitat that day was to no avail. Right up to the moment we arrived at the hut on Grid B5—the wooden shack where we stayed overnight—as nightfall approached, the cackle of the hornbill was still not heard.

“There are certain times in the day when one can hear the sounds of the ivory hornbill,” said Aryf Rahman from the non-profit organization Rangkong Indonesia, whose post is in the Kapuas Hulu. “Having said that,” he added, “still, those certain times cannot be considered a certainty.” 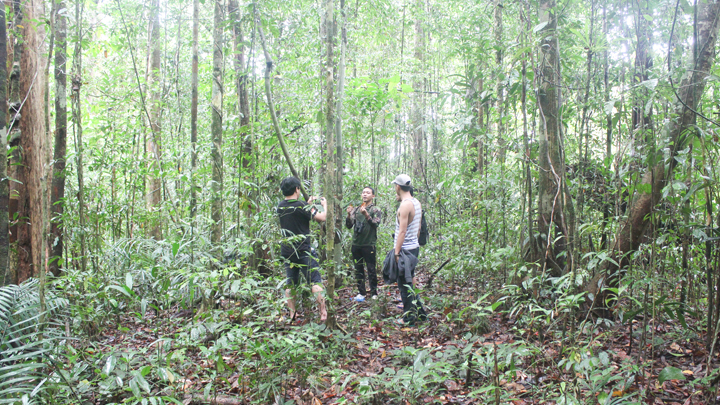 In mid-September, Aryf had spent more than a week observing the forest in the vicinity of Segitak village. On September 16, at 1:40pm, he heard the cackle of an ivory hornbill coming from near the banks of the Entibab River, some 300 meters from the B5 hut. The next morning, he could still hear it cackling, though by then the sounds were a little farther away.

Aryf said, on September 18, when haze from forest fires covered the area, assumedly carried by the wind from the direction of the Melawi and Sintang regencies, he had had a glimpse of a lone ivory hornbill perching on a low-hanging branch. In fact, the bird usually only flits around high-standing treetops. Four days later, when the haze had dispersed, Aryf also heard the cackle of some ivory hornbill and the enggang cula, or great rhinoceros hornbill (Buceros Rhinoceros), calling out to one another in the middle of the day.

After the overnight at the B5 hut, as day grew lighter, Tempo with some people from the Tropical Forest Conservation Act Kalimantan, the Biodiversity Indonesia Foundation, and Rangkong Indonesia, headed toward Bukit Belimbun. The hills of Belimbun lie some 15 minutes by foot from the hut. Aryf had us go there because the area boasted an ara, or beringin tree (Ficus benjamina), whose fruit is the main food of the ivory hornbill.

But after more than an hour observing the area, still no ivory hornbill alighted on any of the branches. We waited till midday, before we headed back towards the residential area of Segitak village. The sounds of the ivory hornbill were ominously silent the whole trip back to the periphery of the forest.

Although very easily recognizable, of late the ivory hornbill is practically unavailable for sightings, particularly in the past three years. In 2015, the International Union for Conservation of Nature had deemed the ivory hornbill as holding a critically endangered status—one step away from extinction. The status was given based on inputs derived from research data originating in Indonesia.

Supporting data on the bird’s population could also be found in the Ivory Hornbill Conservation Strategy and Action Plan (SRAK). In that document, a population table drew up map estimates of the bird in East Kalimantan and Central Kalimantan. Accumulation of map estimates of the bird showed at 0.5-0.7 bird populace per square kilometer. “Meaning, the population density of the ivory hornbill is abysmally low. For any random given square kilometer, there is possibly not a single ivory rangkong to be found,” said Yokyok Hadiprakarsa, head of the Rangkong Indonesia research team.

According to Yokyok, the population estimates of the ivory hornbill is derived from direct sightings of the bird and sometimes simply from hearing their sounds. “In fact, 80 percent of surveys of the ivory hornbill are based on sound hearings,” he said. He added, evidence of how minimal the bird’s population is in its habitat is also derived from head counts of the bird caught in the act of being smuggled out. 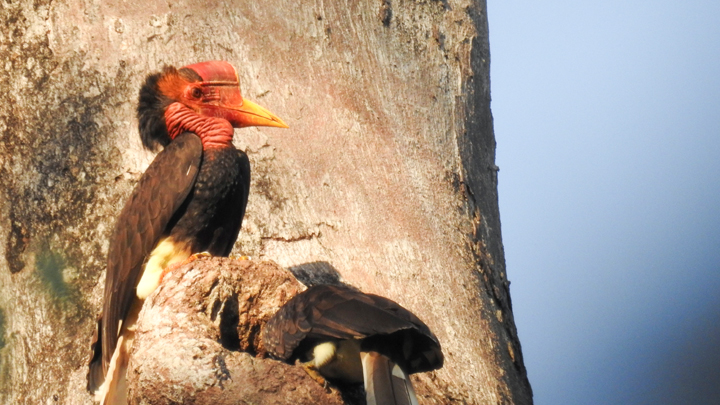 THE ivory hornbill is a large bird species with a long and wide feathery tail. In the Rangkong.org website, the Rhinoplax vigil is described as measuring up to 190 centimeters from beak to tail, with a wingspan of up to 90 centimeters and a weight of up to 3 kilograms. The male ivory hornbill has a featherless red-hued neck, while the female has a neck that is bluish-white.

The bird whose local name is also the enggang gading (ivory enggang) has a symmetrical beak which ends in a sharp point. The hornbill on the top part of its beak comprises dense matter. This hornbill comprises around 13 percent of its entire body weight. The bird uses the hornbill to fight over the fruit of the beringin tree, its main food. The most endearing feature of the species is its chirp, which sounds like the cackle of a human being laughing and can be heard from distances of up to two kilometers.

Indonesia has the largest ivory hornbill habitation area. But the species will only nest in large trees whose trunks have natural holes in them with a lump in the opening. The tree lump is used as the platform for the parent bird to feed the chicks nestled safely within the hole. This nesting model is unique to the ivory and is not found in any other hornbill species.

Like all the enggang, the ivory hornbill stays with a single partner throughout its entire life. After finding the right nesting hole, the female of the species will go in and isolate herself. It takes about 180 days to give birth to one chick. “The entire process of laying the egg, incubating it, hatching it, until the chick is ready to leave the nest takes up to six months,” quoted from the Rangkong.org website. 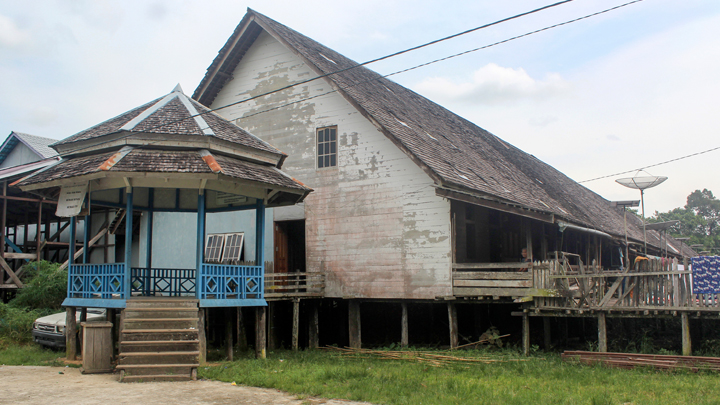 ALL the hornbill species are protected under Law No. 5/1990 on the conservation of natural resources and their ecosystems. There is also Government Ruling No. 7/1999 on preservation of plant and animal species. The ministry of environment and forestry also has an Ivory Hornbill Conservation Strategy and Action Plan applicable for 10 years.

Despite these rulings, illegal trading of the rangkong still continues. Yokyok Hadiprakarsa said, the ivory hornbill is considered exceptional among the enggang because of the hornbill on its beak. The hornbill, or the ‘ivory’, is made up of keratin, like the piles on the horn of the rhinoceros and the ivory on elephants. Detective work carried out by Rangkong Indonesia showed the hornbills in their entirety being traded much like the trade in ivory tusks of the elephant. “Some traders use the hornbill as the medium for carvings,” said Yokyok.

Yokyok discovered the ivory hornbill has long been traded to China, since the time of the Ming Dynasty in the 14th century. He found several antique items made of the hornbill being put up for sale in international auction sites. The hornbill’s ivory can be transformed into women’s ornaments, such as bangles and and pendants. “In the old days, these ornaments were much desired by the aristocracy,” he said.

After a long period of quiet, with no issues of black-market trade of the hornbill beak, in 2011 suddenly a slew of enggang smuggling efforts in Indonesia came to light. Ivory hornbill SRAK data showed a total of 1,368 smuggling efforts occurring between 2011-2017. According to Yokyok, from the confiscation of the goods, the authorities came to know that the rare hornbills were being smuggled from Pontianak to Jakarta, then to the Netherlands, Hong Kong, China, and Japan.

THE threat of extinction of the ivory hornbill raised enough awareness among certain groups for a concerted effort to emerge to try save the enggang population. The awareness did not only come from conservation groups. The local populace started being serious in warding off the extinction of the species.

Bandi Anak Ragai, known as Apai Janggut, was one of them. This respected personage from the Dayak Iban customary tribe in the Sungai Utik hamlet of the Batu Lintang village, in the Embaloh Hulu subdistrict, Kapuas Hulu, West Kalimantan, is gung-ho about preserving the forest and all the creatures living inside it. In conjunction with the rest of the populace, Apai Janggut put in place customary law banning the hunt of all enggang species, including the ivory hornbill. 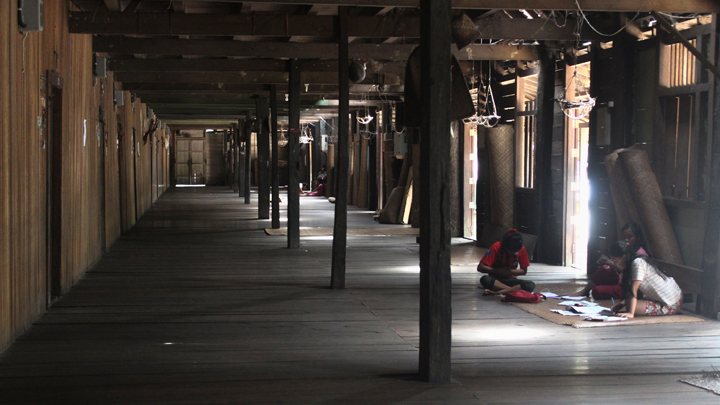 Apai Janggut explained how the Dayak Iban in Sungai Utik use replicas of the ivory hornbill as their symbol for ritual purposes during the customary event known as the gawai kenyalang. In that ritual, people construct a pole made into a post which topmost end is carved into a wooden carving likeness of the ivory hornbill. “There is no real ivory hornbill involved,” he said. He underscored that the enggang bird species in the Sungai Utik forests are protected by customary law. “They may not be captured, let alone be killed.”

The same goes for the people of the Segitak village. Though they have no official customary law nor village ruling in place like the people in Sungai Utik, yet the locals will not hunt for enggang. They abide by local wisdom passed down to them by their elders.

Moksin said, the local people of the vicinity are now trying to relearn the local wisdom passed down to them from their ancestors. Because so many people they did not recognize wantonly hunt in the jungles of Segitak village, the village administration is now laying down official village rulings and customary law. “Not only all the enggang species, we now want to have every single creature protected by our laws,” he said.

The forest surrounding the Segitak village is by no means well-known. But the atmosphere of the jungle, and the potential biodiversity of the bird population that have made that forest their habitat is truly enchanting. And so, Rangkong Indonesia decided upon the area as the hub of their research. The non-profit organization is also currently encouraging development of an ecotourism program to highlight the potential of the forest which services the needs of environmental conservation.

Said Yokyok Hadiprakarsa, ecotourism could become one of the methods the local population can use to monitor the fauna in their forest. Ecotourism could also provide them with a means to continue observing the existence of the ivory hornbill. “The managers could then determine the spot where people may come and observe the hornbill in its habitat,” he said.

Bird researcher from the Indonesian Institute of Sciences, Dewi Malia Prawiradilaga, said ecotourism could help maintain the habitat of the ivory hornbill. The mainstay of ecotourism is keeping a balanced ecosystem. “And there could be sustainable economic gain beneficial to the local populace, which in turn also encourages them to preserve the forest,” said Dewi. “Implementation of any ecotourism activity should always encompass monitoring of the wildlife.”

Obviously, ecotourism differs widely from the characteristics of general tourism. Rules would be in place for appropriate behavior of visitors to better experience the naturalness of the forests they are exploring. “The approach would be natural, with nothing being changed by, say, development,” said ecotourism manager, Theodorus Libertus, of the  Kapuas Hulu Tourism Community.