Many fishers in North Maluku are caught up in a net of rent seeker debt making it difficult for them to achieve prosperity. The local government initiated a program to help relieve them from their debt burden through several programs.

A FULL moon had passed two days before. Yunus Ibrahim busied himself cleaning up the boat’s interior from the grubby moss. Nearing midday, the small boat began to look cleaner. That afternoon, Wednesday, October 18, Yunus and 10 of his colleagues planned to go out to sea again after not doing so for a good six months.

Yunus, who hails from Tomelou, Tidore Islands in North Maluku, related how he was going out to sea again only after obtaining startup capital from the North Maluku maritime affairs and fishery office’s assistance program. He used the money to cover operational costs for four days out at sea.

“Yes, thank God I can start again,” the 48-year-old told Tempo at Goto Port, Tidore Islands. “Prior, I was truly dependent for capital from a catch collector in Tidore town. The loan ceiling was also only up to Rp25 million.”

Yunus is one of 20 fishermen in Tomelou subdistrict, Tidore Islands, who received operational cash assistance from the North Maluku maritime affairs and fishery office. Alongside himself, Husain Marsaoly, 45, also obtained a cash assistance. Any fisherman can obtain assistance of up to Rp100 million with a payback period of one year, while the actual money itself is funneled using banking and cooperatives facilities.

For each trip out to sea, Yunus and Husain said they need at least Rp25 million to Rp30 million for operational costs, which covers fuel, food supplies and blocks of ice needed to preserve the catch. In a single year, they can make five to six trips out to sea and earn some Rp40 million to Rp50 million per trip.

Before the assistance program from the North Maluku maritime affairs and fishery office, most fishermen in Tomelou took out loans from catch collectors who are usually also loan sharks in Tidore. The cash would be used for operational capital to go out to sea, and their catch yield would be seized by the collectors upon their return, as payback. “I have now gradually shaken off my dependency on collectors. This assistance program is a big boon for us,” said Yunus.

According to Buyung Rajilun, head of the North Maluku maritime affairs and fishery office, prior, the fishing community of North Maluku was indeed in a sorry state. The entire community fell into the poverty category.

Buyung had his planning team conduct studies and identify all the issues which caused the fisherman of North Maluku remain in destitution. Under his leadership, since 2015, he wanted the fisher community of North Maluku to be at an improved welfare level. Policies from the North Maluku maritime affairs and fishery office in the next three years are to help nudge local fisherfolk towards better prosperity.

“That became my target. I did not want North Maluku, the largest source of fish yield in Indonesia, to in fact be the region where fisherfolk were destitute. Gradually we came up with policies that aimed at boosting the earning capacity of local fisherman,” said Buyung on October 12. 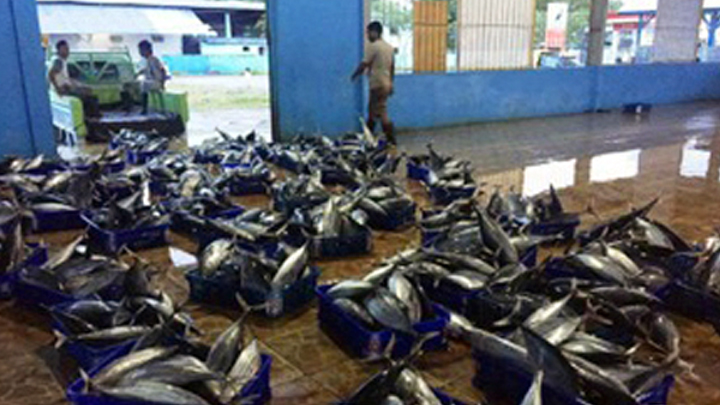 The studies by the maritime affairs and fishery office revealed that fishermen on average tussled with three big issues throughout the year. First was their minimal access to much needed capital. According to Buyung, many fisherfolk in North Maluku could not go out to sea simply for lack of capital. As a result, they resorted to seeking out collectors or loan sharks for money.

Another issue was the low bargaining position they had. The fishery office discovered that many fishermen had no control over the final selling price of their catch, because they were mired in debt with the collectors.

The third major issue was an infrastructure one. The minimum local budget had resulted in a lack of adequate fishery infrastructure in North Maluku, such as a fishing dock, ice-making plants and refueling stations for boats, because they could only be built in increments. The local administration had not provided adequate infrastructure for fuel stations nor post-harvest facilities such as cold storage equipment to store the catch.

“Of the three issues, we focused on seeking solution to the main ones, namely boosting cash assistance for capital and creating infrastructure to support the distribution process of the harvest,” said Buyung.

The fisherfolk foster parent program is one whereby smalltime fishermen or groups get financial help for capital with very low interest rates. The government joined forces with several bank and cooperatives for an easy credit line. Fishermen could obtain startup capital with non-complicated requirements, just evidence of boat ownership and proof of residence in North Maluku.

The foster parent program for fishermen was begun in 2016 to relieve fishermen normally entangled in debt to rent seekers or loan sharks. According to Buyung, in the North Maluku area, loan sharks tended to operate from South Halmahera. There were 15 catch collectors or loan sharks having active control in the Panambuang, Bacan Harbor. Of that number, three were large-scale fish harvest collectors.

They were the gofers of the fishing trade between the fishermen and the buyers, and they had the means of providing cash loans to fishermen. The collectors hoarded all the fishing catch in lieu of payment for the loans the fishermen had made.

North Maluku Governor Abdul Gani Kasuba was livid about the practice that kept fishermen in destitution. He once made plans to simply close down these loan shark operations. “But I did not execute the idea because they too need to make a living. As a better solution, the government took the initiative of providing direct assistance to the fisherfolk,” said Gani.

To that end, he supported several assistance programs, including the foster parent one. In the initial stage, the North Maluku provincial government allocated a budget of Rp6 billion for the effort and continued to add to it annually. This year the allocation reached Rp10 million. “We channel the fund through banking and cooperatives mechanisms. The government only need to give a recommendation as requirement for fishermen to obtain cash assistance,” said Gani.

Three years of effort to boost the welfare of the fisher community in North Maluku are beginning to show results. The Central Statistics Agency (BPS) of North Maluku Province has noted an improvement in the welfare levels of fisher families, measured by their increasing fisher terms of trade (FTT).

Data from June show, the FTT has increased by 0.6 percent. Last year in North Maluku, the FTT was still at a scale of 100.27, in other words below average for an increase in welfare. This year the figure is 100.67. Fishermen income too has shown an increase of 0.51 percent.

Aisyah Bafaqih, a lecturer at the Department of Sea and Fishery Muhammadiyah University of North Maluku said, the capital assistance program for fisherfolk was appropriate to boost independence in their management of sea and fishery resources. It did not only cut the chain of dependency on loan sharks, it also boosted their FTT which elevated their bargaining power in the market. “And most importantly, their welfare is finally getting a real scale up,” said Aisyah.