Regions in East Java are aiming for zero stunting in children. Numerous programs are underway, including education. Incorporating the messages in games has become one of the methods.

EXCITEMENT swept across Kertonegoro Village Hall at the end of November last year. Not only were the mothers busy weighing their toddlers, they were also playing games. The games were not just for fun, they were packed with information. It was an event organized by the village’s integrated health services post (Posyandu).

One of these games involved comparing rice and eggs. A guide asked participants how much iron is in each of these foods. The answer: one egg contains iron in amount equal to four cups, or 5.5 ounces of rice. When asked whether they would prefer rice or egg to get their intake of iron, the women in the game simultaneously answered: egg. “If we chose rice, our stomachs would explode,” said a mother of a toddler in the Madurese language.

The game played by the women in Kertonegoro Village, Probolinggo Regency, East  Java, was one of the modules in the ‘emo demo’ method introduced by the Global Alliance for Improved Nutrition (GAIN). Based in Geneva, this non-profit organization has a mission to free the world from malnutrition.

Emo demo, short for motion demonstration, is a participative method for health socialization intended to promote behavior change for feeding babies and children. Games are used to deliver messages about health in a simple, fun, and emotionally touching way so that the information will be instilled in the mums’ memories. 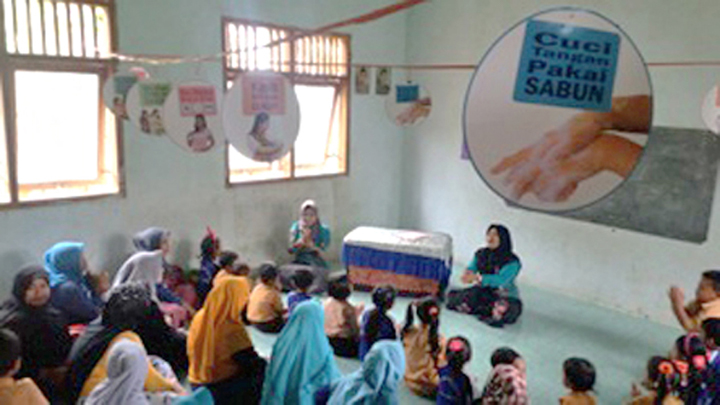 Abdurrahman, Kertonegori Village head said that pregnant women and mothers with toddlers began frequenting the Posyandu after the emo demo was implemented. Prior, it was difficult to persuade them to come. “People here still believe in myths, like one suggesting pregnant women should avoid eating fish because the baby would turn out smelling fishy,” he said.

The emo demo, Abdurrahman continued, also helped people easily understand the nutritional needs of their fetuses and babies. “Pregnant women should eat chicken liver, eggs, and fish. The women also get to know that a newborn baby only needs to be fed breastmilk until six months of age.”

Probolinggo Regency Health Agency Head Anang Budi Y said the government is greatly assisted by the emo demo method implemented in the Posyandus. “We have developed it, focusing on stunting, and instilling good dietary habits,” he said.

Probolinggo is one of the regions in East Java with a significantly high prevalence of stunting. The Basic Health Survey (Riskesdas) in 2013 showed the region had a stunting prevalence of 49.4 percent. It went down to 39.9 percent in 2018, but that number was still high. “We view stunting as a long-term and multi-variable problem,” said Anang.

The regency administration made various efforts to eradicate stunting. One of these was a stunting prevention program through intervention in the first 1,000 days of a baby’s life. “Intervention is made as soon as a woman is identified as pregnant,” he said. Guidance is therefore given for pregnant women.

Prevention efforts were also carried out towards engaged couples so they would be aware of the threat of stunting of any future children. In 2017, Probolinggo Regent Puput Tantriana issued a regulation stating  just-married couples are required to follow a course involving three institutions, the Religious Affairs Office, the Health Agency, and the National Population and Family Planning Board (BKKBN).

“Priority for handling stunting is based on a combination of three indicators, namely the prevalence of stunting, number of toddlers with stunted growth, and poverty levels,” said Anang.

Probolinggo is not the only region actively fighting stunting. Bondowoso Regency, another stunting hot spot in East Java, is also making a move. Deputy Regent Irwan Bachtiar Rahmat said the region’s stunting prevention and treatment programs include improvements to health facilities and services, as well as improvements to infrastructure and education. “My wife even actively participates in the emo demo campaign,” said Irwan.

Regencies and municipalities in East Java are now allocating their own budgets. “They are organizing their own training, their own development,” said Vitria.

GAIN itself had actually started reaching into East Java in 2014 by conducting a study. “Although the stunting percentage is highest in eastern Indonesia, if we look at the total numbers, Java is higher because of the population density,” said GAIN Country Director Ravi K. Menon when visiting Tempo’s office last month.

Stunting eradication cannot be done by solely relying on health programs or education. Efforts must be carried out simultaneously with programs in other sectors, such as agriculture and environmental improvement. “From the health aspect, the handling is around 30 percent,” said Vitria Dewi.

Therefore, Vitria said, when dealing with stunting, the East Java Health Agency and its regions  do not work alone. A  number of Regional Apparatus Organizations (OPD) are involved and coordinated by the East Java Development Planning Board (Bappeda), such as the Fisheries Agency, the Agriculture Agency, the Education Agency, and the Communication and Information Agency. “Every OPD works according to its own role and main function and objective,” said Vitria.

The main point, she added, is that in dealing with stunting, the government does both prevention and treatment. More priority, though, is given to prevention. “When a child suffers stunted growth and is then treated, it would be less meaningful. More important preventing stunting in new born babies,” said Vitria. Therefore, prevention is focused on the first 1,000 days of life since conception, or from the moment  a woman is identified pregnant.” As for children suffering  stunted growth, treatment is delivered by giving nutritious food.

The indirect problems of clean water and sanitation are also being taken care of. So are road construction, considering good roads  are a determining factor to provide access to nutritious food. “When dealing with stunting, we must be coordinated and march together towards the same goal,” said Vitria Dewi.