Water of Eternity in the Sacred Spring


A sacred bathing site discovered in Jombang Regency, East Java, is believed to have been built during the reign of King Airlangga from Kahuripan Kingdom. Other artifacts predate the Majapahit era.

WICAKSONO Dwi Nugroho is excited about the spring, or sendang, in Kesamben Village, Ngoro Sub-district, Jombang Regency, East Java. Ever since an ancient bathing site was discovered at the bottom of the spring, Wicaksono, an archeologist from East Java Cultural Heritage Preservation Agency (BPCP) has had to reopen the literature on Airlangga, founder of the Kahuripan Kingdom who reigned between 1009 and 1042. This is because of a Garuda sculpture found on one side of the bathing site wall. Airlangga, a Hindu Shiva adherer, revered the deity Vishnu, protector of the universe who rides on Garuda.

The artifacts found during excavation, according to Wicaksono, came from a time before the Majapahit Kingdom. Some pieces of porcelain bowls and jars, for example, bear the characteristics of the Song and Yuan Dynasties from China, as do the Chinese coins found alongside them. The Yuan Dynasty reigned between 1271 and 1368, about the same time as Majapahit Kingdom, while the Song Dynasty governed from 960 to 1279. “We suspect the bathing site was built before Majapahit and was still maintained during the Majapahit era,” said Wicaksono who led the excavation on October last year.

East Java BPCP Head Andi Muhammad Said said the Sumberbeji bathing site is a unique and important find. “Seeing the condition, this is no ordinary bathing site, (but) rather meant for the nobilities,” said the archeologist who is known as Said among his peers.

That belief is supported by the presence of the Garuda sculpture and a jaladwara (waterway segment) made from andesite stone, along with other artifacts symbolizing the ruler at that time. However, Said mentioned that his team has not yet commenced further study. Their priorities for now are preservation and physical research.

For Wicaksono, the discovery in Sumberbeji is related to the tale of Samudra Manthana in the Mahabharata tome. He said that, aside from the Garuda sculpture—whose left hand is holding a jug, pouring water—and the jaladwara in the shape of a dragon’s head, references to the Samundra Manthana concept may be inferred from the brick structure in the center of the bathing site, supposedly shaped like a turtle, ruins of an alleged tower or symbol of the Mandhara mountain, and an artifact made of clay that is thought to be a shanka, or conch trumpet.

Samudra Manthana is a popular tale among followers of Hindu Shiva in Southeast Asia. Influenced by Indian culture of the time, this Hindu myth, said Wicaksono, tells the story about the struggle of the gods and the asuras (divine beings/giants) in obtaining amerta, the holy water for immortality, by stirring the sea of milk. The ocean stirred produced a number of valuable items, magical animals, goddesses, and nymphs, including Dhanvantari—the heavenly physician—who carried amerta and shanka used as a trumpet by Vishnu. Garuda needed the amerta to free his mother, Winata, from the slavery of Kadru.

DISCOVERY of the bathing site, located around 15 kilometers south of the Jombang City center, began in work by residents of Sumberbeji village and the spring’s caretaker, Samsul Hadi, on Sunday, June 30. The spring, situated in the middle of rice fields in the village’s grounds, needed to be drained. “It was filled with mud deposits and leaves from trees that grew in  its center,” said Sarif Hidayatullah, head of the Sumberbeji Cultural and Historic Heritage Preservation Association.

After the spring was cleaned, an ancient brick structure resembling a water channel was spotted. The discovery was then reported to the East Java BPCP. A team was  dispatched to the site on July 2, followed by a five-day recovery survey between July 30 and August 3, 2019. The survey involved Kesamben Village and the Jombang Regency Public Works Agency, who brought an excavator to clean up sedimentation at the bottom of the spring. 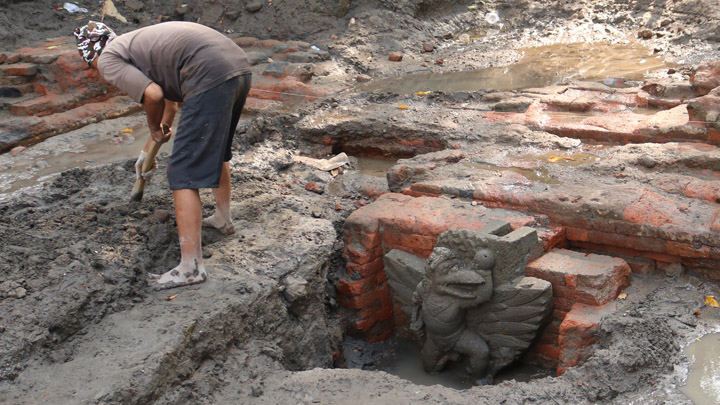 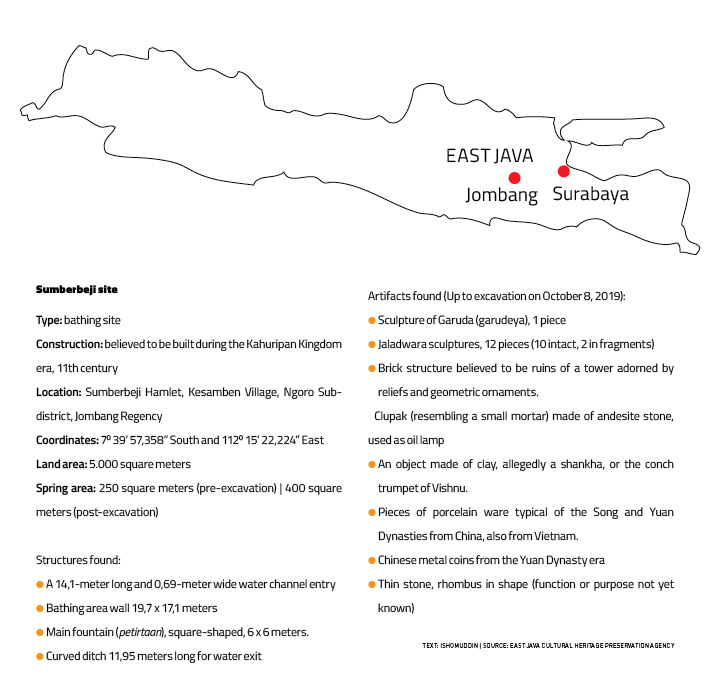 The survey found an ancient water channel made of bricks, measuring 15,39 meters long, 1,5 meters wide, and 2 meters deep. Each brick measured 38 x 23 x 6 centimeters, larger than modern bricks. The bricks were layered, creating a structure from bricks rubbed against each other to congeal them.

Assisted by local residents in the excavation, the BPCB team also discovered 12 jaladwaras, 10 of which are relatively intact, while 2 others were in fragments. All had been detached from the main structure. The jaladwaras have motifs or carvings of lotus blooms, deities or figures, animals, and makaras, mythological creatures resembling an elephant, crocodile, or deer, but with the tail of a fish or dragon. Also found was a clupak, or small mortar-like container used for an oil lamp.

SUMBERBEJI spring is known as a sacred place. For hundreds, or probably thousands, of years, the never-ending flow of water from this spring has provided locals with a life-source, particularly for agriculture irrigation. A local figure, Muhammad Aan Lutfiuddin, said, aside from water, locals refrain from taking items, fish, or plants from the spring. “They believe doing so will bring about misfortune,” said Aan.

Aan’s grandmother, Supinah, who died in 1993, used to tell him a familiar story  when he was little. “My grandmother said, indeed there were a bathing site (petirtaan) and temple there,” he said. His grandfather, Imam Mubari, warned Aan’s mother not to play around the spring due because it was a  sacred site. “My mother had never set foot there since she was still  very young. I only took her there after the discovery of the bathing site,” he said.