Areca palm frond midribs used to be nothing but waste for the residents of Mendis in South Sumatra. But now, they make them to be eco-friendly eating utensils and sell them to various cities in the country.

TRI Mulyadi’s family initially gave no particular response upon seeing the frozen fish roe souvenir he took out from his bag. Mulyadi, a regional development analys from the Musi Banyuasin Regency Development Planning Board, had just returned from his trip. He went to villages around the conservation forest in Musi Banyuasin, along the border with Jambi Province.

However, when he opened the thin plastic wrap covering the package, his wife and children were surprised. They found plates and food containers made of materials that looked like teak wood. “They thought the souvenirs were ornaments to be displayed in the living room,” said Tri Mulyadi in January.

Tri explained that the items he carried home were plates and food containers made of Areca palm frond midribs. To convince his family, Tri took a midrib plate and put a sheet of banana leaf on it, then he filled the plate with rice and side dishes. “My wife and children were astonished when they discovered that the plates and bowls were indeed made of palm midribs. They asked me to get more to be marketed through social media,” said Tri, a resident of Villa Bukit Sejahtera housing complex, Sekayu City, Musi Banyuasin.

Tri bought the plates and food containers from crafters of palm midrib micro-production of Mendis Maju Bersama (MMB) Cooperative. Their workshop is located in Mendis village, Bayung Lencir subdistrict, Musi Banyuasin, bordering the Jambi province. He happened to visit Mendis and a couple of other villages in Musi Banyuasin with the integrated monitoring and evaluation team from Kelola Sendang-ZSL Indonesia who were helping with sustainable development efforts in those villages.

There, he witnessed how the palm midribs were turned into eating utensils. “From this process I know that the plates are hygienic, clean, and suitable for food (food grade),” said Tri. Aside from that, importantly, they also “Help reduce usage of plastic, styrofoam, and paper wraps.”

Areca palm frond midribs used to be nothing but waste for the residents of Mendis. Living in peatland area between Merang River and Ngirawan River, people here mostly had already made their living from farming or rubber and palm oil plantations. They had little use for the midribs. Only few were used for household purposes, such as lids for earthenwares. “When piles of Areca palm midribs had become unsightly, people would just burn them,” said Supriyanto, head of the Mendis Maju Bersama Cooperative.

Some programs were rolled out, including one aimed toward economic empowerment of locals so that they would not depend too much on illegal forest utilizations, such as arbitrary forest clearing or tree logging. “So, it was also done in the interest of conservation.” 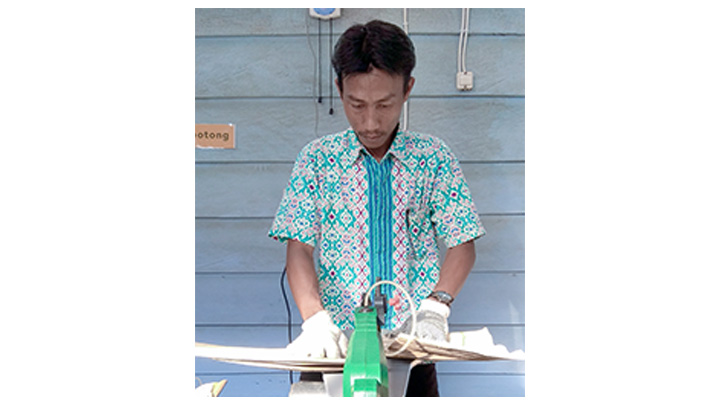 Supriyanto cuts the palm frond to made into plates and food containers./TEMPO/Parliza Hendrawan

At the time, according to Ilahang from the rubber farmer assistance team of Kelola Sendang, residents of Mendis had not formed a cooperative. There was only a group of farmers who sold rubber together. Assisted by SNV Netherlands, and later by the larger collaboration team of Kelola Sendang-ZSL, the group of farmers continued to grow until they formed a cooperative, which currently has 28 members. No longer just selling rubber, they have branched out to several other businesses, such as sales of fertilizers, knives, and also savings and loans. “And then they went on to making plates from Areca palm midribs,” said Ilahang.

Aside from turning waste into something useful, Wijaya said that his team would like to see people of Mendis and the surrounding area gain additional income from gathering midribs, either to be sold or processed on their own. The cooperative purchases midribs from village residents at a price of Rp300 to Rp400 for each 25-centimeter wide piece.

Also important is that production of plates and bowls made from midribs may also reduce plastic usage, or other non-biodegradable waste commonly used as food containers. “We, and the people, want to seek alternative to styrofoam for food containers,” said Wijaya. He said that millions of plastic wraps and styrofoam are used by online food delivery services each day. Alan Makarim from Footloose Initiative added that data from his organization research shows that the use of disposable plastics is can reach 18 million pieces per day.

According to Supriyanto, it is not too hard to create utensils from Areca palm midribs. Before pressing with machine, midribs are first cleaned with flowing water. Then, they are dried, either by using electric heater or by leaving them under the sun. After that, they are cut into desirable sizes and go straight to the pressing machine. “No varnish necessary because they are naturally shiny,” said Supriyanto.

Started producing only in the beginning of December 2019, the Areca palm midrib plates business quickly took off. Demands flowed in almost immediately, not only from Musi Banyuasin, but also other cities in Indonesia such as Jakarta, Bali, Bandung, and Malang. They even had to turn down several orders because of the still-limited production capacity, due to tools limitation. They now only have two pressing machines, and also lack adequate storage space for both raw materials and products. 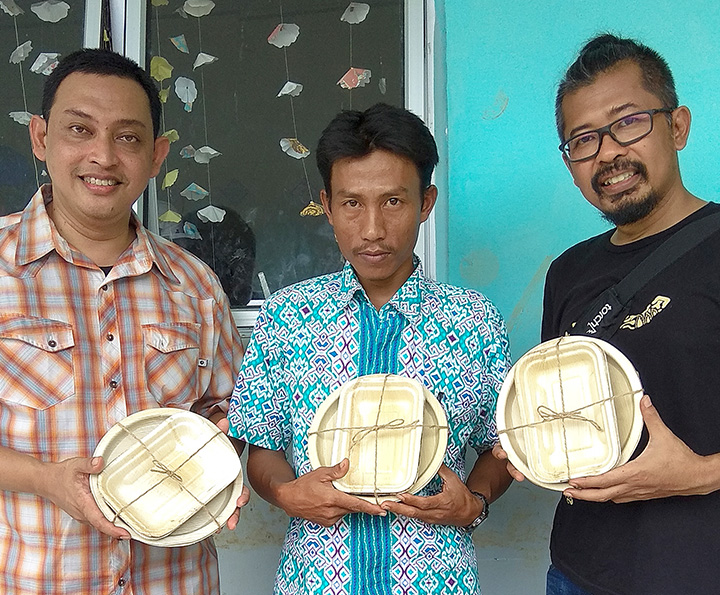 Another problem is that fungus spreads easily on the midribs during the rainy season. They have yet to find a solution to this issue.

The cooperative, according to Supriyanto, currently can produce an average of 400 to 500 eating utensils per day. “If the weather is good, the number may reach 800 to 1,000,” said this rubber sap collector. Each utensil sells for Rp1,500 to Rp1,800 on average.

Wijaya said that the team from Kelola Sendang-ZSL Indonesia is still trying to improve business and product development abilities of the crafters. “Therefore we continue to innovate, seeking ways to enable large scale production,” said Wijaya.

Musi Banyuasin regional administration was moved by the work of Mendis residents. Regent Dodi Reza Alex said that the government, together with the village administration and the team from Kelola Sendang-ZSL Indonesia, are committed to continue the innovation in developing environment-friendly local products. “Production of plates and food containers from Areca palm midribs as substitute to styrofoam is an example of that commitment,” said Dodi, who also heads the Lestari Regency Meeting Circle (LTKL), a forum of collaboration of 11 regencies from eight provinces committed to sustainable development.

He also prepared several programs to optimize production and sales of the midrib utensils. To maintain production stability, for example, he appointed the plantation office to intensify Areca palm plantation around Mendis village, in order to ensure year-round supply of raw materials. “Of course, we will help with the cultivation of Areca palm seedlings,” said Dodi.

To help with marketing, he requested the Family Welfare Movement (PKK) team in Musi Banyuasin to assist in promotion, through both social media and partners network. As for product development, a Areca palm midrib product creation contest will be held in the near future.

Kelola Sendang Director, Damayanti Buchori, emphasized that the Areca palm midrib business is based on community and conservation. “So, communities in various regions should to be encouraged to develop production, while adhering to the principle of conservation community.”