Bakrie Under the Loop, Auditors Split


The BPK discovered suspicious investments from Asuransi Jiwasraya in shares of the Bakrie Group. However, this may not be included in the conclusion of the investigation.

IN the case of Asuransi Jiwasraya, it appears that the Attorney General’s Office (AGO) and the Supreme Audit Agency (BPK) operate side-by-side. They promise to meet each other at the end of the journey, matching their investigation and audit of how much the state has lost due to the suspected investment fraud at Indonesia’s oldest life insurance company.

“As soon as the BPK announces its audit results, say on Monday or Tuesday, we immediately go to the first phase (of submitting documents to the prosecutor). Just one day apart,” said Ali Mukartono, junior prosecutor for special crimes, at the AGO in Jakarta on Thursday, March 5.

That evening, Ali left the building while the three suspects in the Jiwasraya case were being questioned by the AGO investigation team. The three suspects, questioned since noon that day, were Hendrisman Rahim, former Jiwasraya CEO; Benny Tjokrosaputro, head of Hanson International; and Heru Hidayat, owner of a number of firms affiliated in the case. Unless there are delays, the awaited audit results will be in the AGO’s hands this week.

The BPK is indeed calculating the losses suffered by the state from this case. In late January, when the start of the audit was announced, BPK Chairman Agung Firman Sampurna promised that the audit would be concluded in two months.

A Tempo source familiar with the examination process said that the audit team has compiled important findings on the Jiwasraya case. However, apparently these discoveries are the source of debate within the BPK. The nine BPK members are divided into two camps, arguing whether it is necessary to explore the losses from the repurchase agreement involving a number Bakrie Group firms, the business group owned by Aburizal Bakrie’s family.

The AGO had already mentioned that there was a Jiwasraya investment in one of the Bakrie Group affiliates. Without giving details, AGO Chief of Communication Hari Setiyono only said that the investment was made at a coal mining company. “Because it is in the form a limited liability company, it has to be handled with care,” Hari said on February 24.

THE emergence of the Bakrie Group has added to the list of actors involved in the financial downfall of Jiwasraya, resulting in a payment default of Rp16.7 trillion. The majority of the debts is from the JS Saving Plan, a saving and investment product with return guarantees and insurance protection. JS Saving Plan’s funds are suspected to have been recklessly invested in the capital market.

So far, since the Jiwasraya case started rearing its head in late 2018, only two business groups are said to have been involved. Shares from companies owned by Heru Hidayat, such as Trada Alam Minera (TRAM) and Inti Agri Resources (IIKP), have been purchased by the Jiwasraya’s board of directors without sufficient risk analysis. The same thing happened with MYRX shares, the code for Hanson International owned by Benny Tjokrosaputro. But now it turns out that the BPK audit has discovered Jiwasraya investments in the Bakrie Group in no small amounts.

Three audit and law enforcement sources familiar with the case said that the Jiwasraya investment is found in at least 10 Bakrie firms. Most of the shares from the companies are worth only Rp50 per share. Known as penny shares, this kind of portfolio is usually only traded on the informal floor, not in the official stock exchange.

Apparently, the Bakrie shares in Jiwasraya go back at least a decade. This legacy from the former board of directors is believed to be the work of Hendrisman Rahim and Harry Prasetyo, respectively Jiwasraya former CEO and financial director from 2008 to 2018. Both are now suspects in the case. The three sources said that Bakrie’s footprints were recorded when the investigation looked into Jiwasraya’s mutual funds.

So far, firms from the Bakrie Group did not appear in Jiwasraya’s stock collection. Apparently, those shares were hidden as underlying assets, as Jiwasraya had invested in a number of limited participation mutual funds (RDPT). It turned out that a number of those RDPT products collected shares affiliated to the Bakrie Group.

The audit team’s investigation found that the transactions started with repurchase agreement (repo) of stocks between 2004 and 2006. At that time, the Bakrie group has been known to pursue funding by mortgaging its shares through a number of security firms, which then look for investors through limited equity instruments. The ongoing investigation has found that Jiwasraya’s investment in Bakrie group shares through repurchase agreements is estimated at Rp3 trillion or more.

Apparently, the Bakrie group never redeemed those repos. An exchange player explained that some of Jiwasraya’s mutual funds has Bakrie shares, such as Pan Arcadia Dana Saham Bertumbuh, Pan Arcadia Dana Saham Syariah, Pinnacle Dana Prima, Pool Advista Kapital Optima, Pool Advista Kapital Syariah, and Treasure Fund Super Maxxi. Until now, as indicated on the official site of Bakrie & Brothers (BNBR), Pinnacle Dana Prima RDPT still has 2.89 percent of the company’s shares. Details of Jiwasraya investments, obtained by Tempo from the stock market, shows that until December 2019, Pinnacle Dana Prima was one of the mutual funds collected by Jiwasraya with an acquisition value of up to Rp1.817 trillion. 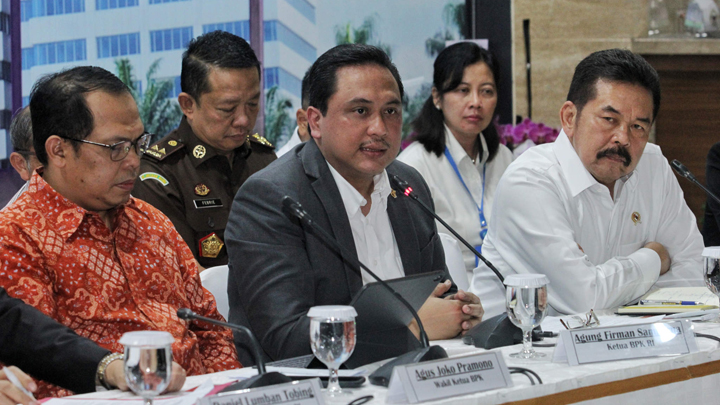 With the market-to-market method—multiplying the market price with the number of shares—the estimated worth of the company shares controlled by Jiwasraya only amounted to Rp1.06 trillion. However, the source said, the BPK audit team’s early findings indicated that Jiwasraya had bought the shares for about triple the price. The gaping difference between purchase price and the current market value, and the negligible chance of ever being able to sell those shares, can be considered as a loss. Auditors also suspect that the shares repurchase agreement is not much different from Jiwasraya’s other investment transactions, which turn out to have been done outside the regulations set by stock market authorities.

When asked for clarification regarding the share repo at Jiwasraya, Aburizal Bakrie’s brother Nirwan Bakrie, who is also one of the heads of the Bakrie Group, did not answer Tempo’s questions posed on his mobile phone. Neither did Christofer A. Uktolseja, the Group’s corporate secretary.

Tempo sent out similar questions to Bobby Gafur S. Umar, BNBR’s CEO from 2002 to 2008, and 2010 to 2019. But Bobby, who currently is the company’s commissioner, said that Tempo should ask for clarification from the board of directors. “I am no longer BNBR’s CEO,” he said. “As a listed company, management is not the sole holder of shares.”

Since May 2019, Bobby has been replaced by Anindya Novyan Bakrie. However, until the afternoon of Saturday, March 7, this son of Aburizal did not respond to calls and short messages from Tempo. Neither did Jiwasraya CEO Hexana Tri Sasongko.

BPK’s preliminary findings indicated that Heru Hidayat had a role in polishing Bakrie Group shares so that the unredeemable repo shares appear to generate returns. In the beginning, Heru laundered the Bakrie repo with a fund management contract through TFI JS Extra owned by Treasure Fund Investama, an investment manager affiliated with Heru. In return, Jiwasraya would channel premiums from the saving plan product to investments affiliated to Heru, which had promised high yields. In January, TFI’s board of directors was also under scrutiny by AGO investigators.

Tempo’s source also said that the BPK audit team was about to look deeper into the footsteps of the repo shares affiliated to the Bakrie Group. Moreover, the investigation assignment letter gives them the task to look into Jiwasraya during the period of 2008-2018. Later on, however, BPK Deputy Chairman Agus Joko Pramono, supported by his boss Agung Firman Sampurna, asked that the investigation be accelerated. “This means that the Bakrie traces will be put aside for now,” said one of the auditor sources.

This is when temperatures started rising at the BPK, and got even hotter when the investigation still has not found the direct involvement of Benny Tjokrosaputro, who has already been detained and named as a suspect by the AGO. When Jiwasraya bought the MYRX shares in 2015, Benny was pawning his shares to Heru Hidayat with a ratio of 1 : 5. This means that Benny borrowed Rp150 billion guaranteed by MYRX shares worth Rp750 billion.

Heru then sold MYRX to Jiwasraya through a number of mutual funds. Operator for this sale was Joko Hartono Tirto, director of Maxima Integra and a confidant of Heru, who has also been named as a suspect.

Meanwhile Heru, when asked by reporters that afternoon prior to his questioning, did not give an answer on the repo matter and Jiwasraya’s MYRX transaction. “Oh, later.” When asked again about the same matter after the questioning, Heru kept mum.

The minor finding on Benny’s involvement in the Jiwasraya case has worried the AGO. On February 28, the AGO summoned the deputy in charge of the BPK team auditing Jiwasraya. Ali Mukartono denied reports that it was an investigative summons. “Yes, it was a clarification of the audit results. But why the need for a questioning? That’s not the AGO’s business. That’s a matter for the BPK.” Meanwhile, inside the BPK, the deputy in charge of the audit team was accused of obstructing the investigation, as he had asked for an extension of the investigative period in order to include the transaction of the Bakrie share repo be investigated.

BPK Deputy Agus Joko Pramono, contacted through the Telegram app, did not reply when asked for clarification by Tempo. However, BPK Chairman Agung Firman Sampurna denied that there are efforts to cover up findings or limit the audit’s scope.

Agung said that Jiwasraya is a complex case involving many parties, so sufficient time is needed to reveal the whole case. In the audit of the state loss calculation (PKN), this son of Golkar politician Kahar Muzakir said that there are criminal indications detected by the AGO. “It would be better not to throw accusations or weaken the law enforcement process by the AGO, which is supported by the BPK audit,” Agung said through a short message on March 6. “The PKN audit is linked with law enforcement, and obstructing this process means obstructing law enforcement.”

Even though the deputy in charge of audit has been removed from the team, the split is still inescapable. There was a big uproar when the audit team divulged its findings in a session attended by six BPK members. Two members who are also politicians from the Indonesian Democratic Party of Struggle (PDI-P) party, Isma Yatun dan Daniel Lumban Tobing, asked the team to look further into the role of the Bakrie Group. Meanwhile, Agung and Agus were steadfast that the PKN audit should be released immediately. Both insisted that the involvement of other parties will be traced in a lengthier audit investigation.

The BPK plans to have a session to decide on the audit team’s report on Monday, March 9. The session will also decide if the result of the investigation would only list the role of suspects already set by the AGO, or also include suspicions of the involvement of other actors in this case.