The trade minister issued a new regulation on forestry industrial products export. Some fear that the absence of requirements showing timber validity will increase illegal logging.

NEW regulations regarding forestry industrial products issued by the trade ministry in mid-February caught Vincent Picket’s attention. This European Union (EU) ambassador for Indonesia said he would assess the regulation’s impact on the function of the Voluntary Cooperation Agreement between the EU and Indonesia regarding wood products. “We have asked for an official consultation with the Indonesian government,” said Picket, who is Dutch, to Tempo on March 26.

This new regulation, effective in May, scraps the requirement to attach the V-Legal document for forestry product exporters. This is the document proving that wood used for the industry has fulfilled all aspects in the Timber Legality Assurance System (SVLK). 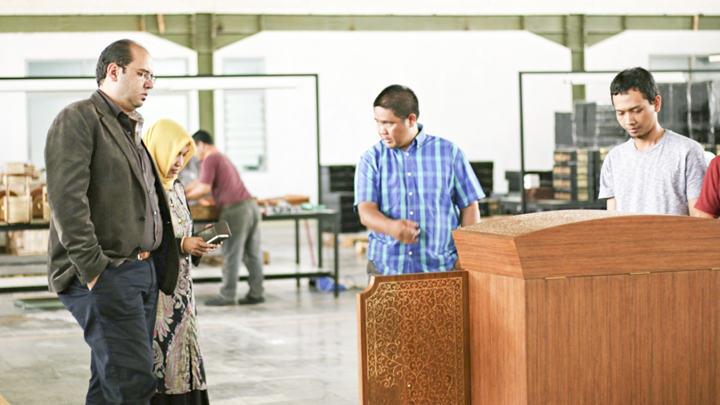 Developed by the environmental and forestry ministry in 2009, the SVLK is a mechanism to suppress illegal logging, which at the time had already destroyed 24 million hectares of Indonesian forests in merely two decades. Through the SVLK, the government requires forestry industrial players to report their products’ plans and realization, source of timber, and fulfilling payments to the state.

SVLK’s full reinforcement on all forestry industrial players in 2015 has earned Indonesia the honor as the first country to receive the Forest Law Enforcement, Governance, and Trade License (FLEGT) from the EU. This license, awarded in 2016, guarantees that all wood from Indonesia does not need special inspection to enter European ports, as its sources are assured to be free from illegal logging.

Vincent Piket refrained from revealing the possible steps that may be taken by the EU, and the impact that would have on Indonesia’s timber market in Europe in the future due to the new regulations. At this point, Picket said he would wait for the official consultation with the government.

The Independent Forestry Monitoring Network (JPIK), a civil group involved in public monitoring within the SVLK, worries that this new trade ministry regulation would intensify the marketing of illegal wood products. JPIK campaigner Muhammad Ichwan said that loosening up trade regulations in the downstream forestry industry could potentially trigger illegal logging in the upstream industry. “This is a threat that could smear the image of Indonesian timber,” Ichwan said.

PRESSURE that downstream industries are not required to adhere to the SVLK has actually been ongoing since this verification scheme was implemented in the whole forestry product supply chain in 2015. In the past year, this producers’ lobby made its moves again through the Indonesian Furniture and Crafts Association (HIMKI).

The group has good ties within government circles. Rachmat Gobel, a businessman who was also the former trade minister and is currently the House of Representatives’ (DPR) deputy speaker, is on its advisory board. Other HIMKI members include Rakabu Furniture, the furniture company founded by President Joko Widodo.

On August 3, 2019, HIMKI wrote a letter to the President. The letter started by congratulating Joko Widodo on his re-election victory, and proceeded with a number of recommendations and notes from a HIMKI board meeting on July 25, 2019, in Bali. Basically, HIMKI deems the SVLK as one of the reasons weakening Indonesia’s furniture and crafts competitiveness. The association then suggested that the government change SVLK’s status into a voluntary instead of a mandatory stipulation. A month after that, on September 9, 2019, a similar letter was sent to Cabinet Secretary Pramono Anung. 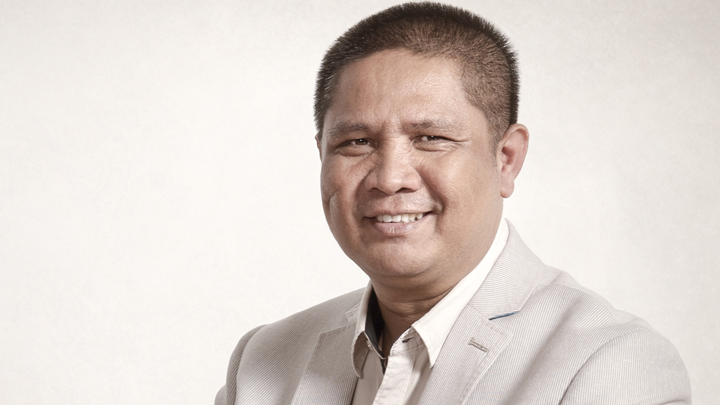 HIMKI’s recommendation was mentioned by Darmin Nasution, the coordinating minister for the economy at that time, in the limited coordination meeting in September 2019. In the press conference, Darmin said at the time that a number of wood and rattan producers suggested that the SVLK should no longer be required for export products going to countries that do not demand legality verifications. Afterwards, a number of meetings were held at the coordinating ministry for the economy, involving the trade and the forestry ministries.

A ministerial official familiar with the meetings divulged that in the beginning there was agreement that all matters regarding timber legality verification would be managed separately by the forestry ministry. Meanwhile the trade management, including the surveyor institution, would be handled by the trade ministry. Thus, the initial agreement was to have two regulations from both ministries be applied simultaneously.

The main problem, the source continued, came from the suggestion to separate the downstream and upstream industries in the mandatory SVLK scheme. The forestry ministry believed that this discourse would destroy SVLK’s image and Indonesia’s export products in the eyes of the international market. The same would be true for the suggestion that V-Legal would only apply to exports to countries that demand it, like EU countries. This is why, the source said, the forestry ministry had preferred that regulations for the surveyor institution and V-Legal issuance would not be separated. “However, the trade ministry ended up issuing a draft that only manages the surveyor institution,” the Tempo source said.

Another Tempo source at the forestry ministry explained that in the last meeting, his ministry refused to put its signature on the document drafted by the trade ministry, although they continued to participate in the meeting in order to construct a ministerial regulation draft on V-Legal. “But the trade ministry suddenly came out and issued a new regulation that scrapped V-Legal altogether,” the source said. “This was another pressure for us.” 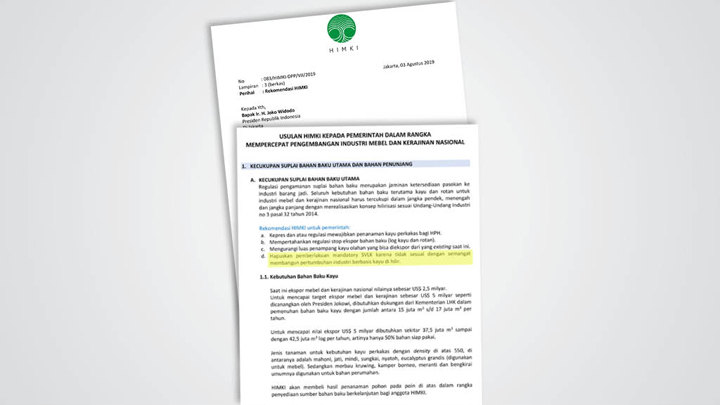 Until Friday, April 3, Tempo’s efforts to get comments from Environmental and Forestry Minister Siti Nurbaya Bakar were left unanswered. Bambang Hendroyono, the ministry’s forestry secretary-general who is also acting director-general for sustainable production forest management, also did not respond to calls from Tempo regarding the new trade ministry regulation. Cabinet Secretary Pramono Anung also did not reply to Tempo’s question regarding HIMKI’s letter to the Presidential Palace.

Confirmation actually came from HIMKI Secretary-General Abdul Sobur. He claimed that he met Minister Siti Nurbaya on December 20, 2019, since the forestry ministry had not responded to HIMKI’s recommendations. “All this time we have received full support from the industry ministry and the coordinating ministry for the economy in our efforts to scrap the SVLK from the downstream industries,” Sobur told Tempo on March 25. 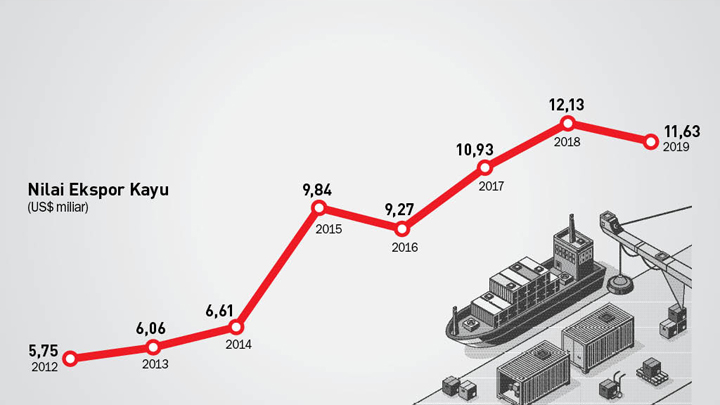 Sobur said that the SVLK has been an obstruction, and the main reason for the low competitiveness of furniture and crafts export products, because it demands the fulfillment of too many requirements. Many inspections, he continued, have nothing to do with wood used as basic material in the downstream industries. In the recommendation letter to the Presidential Palace in September 2019, HIMKI reminded that not all furniture products use forest products, but source from plantations instead.

Sobur is confident that removing the SVLK will boost furniture and crafts exports. “The projection is a growth of between eight and 10 percent,” he said.

SINCE holding the position of assistant deputy for export enhancement and international trade facilitation at the coordinating ministry for the economy, Ichsan Zulkarnaen has been involved in a number of discussions on drafting Trade Ministry Regulation No. 15/2020. “This regulation is a follow-up on the limited meeting with the President to facilitate timber and furniture exporters. Directives come straight from the President,” Ichsan said when contacted by Tempo on April 2.

Ichsan further said that since the regulation came out in the midst of the Covid-19 outbreak, it will end up being part of a non-fiscal stimulus package in the form of simplifying and reducing prohibitions and restrictions on export activities. However, Ichsan denied that this new regulation has completely scrapped the SVLK and V-Legal. He points out that the regulation only removed the V-Legal requirement for the downstream industries.

Until now, he continues, the V-Legal document in the SVLK has been part of the requirements put into the trade agreement between Indonesia and the EU. “Countries who do not ask for the V-Legal do not need to be given that.” 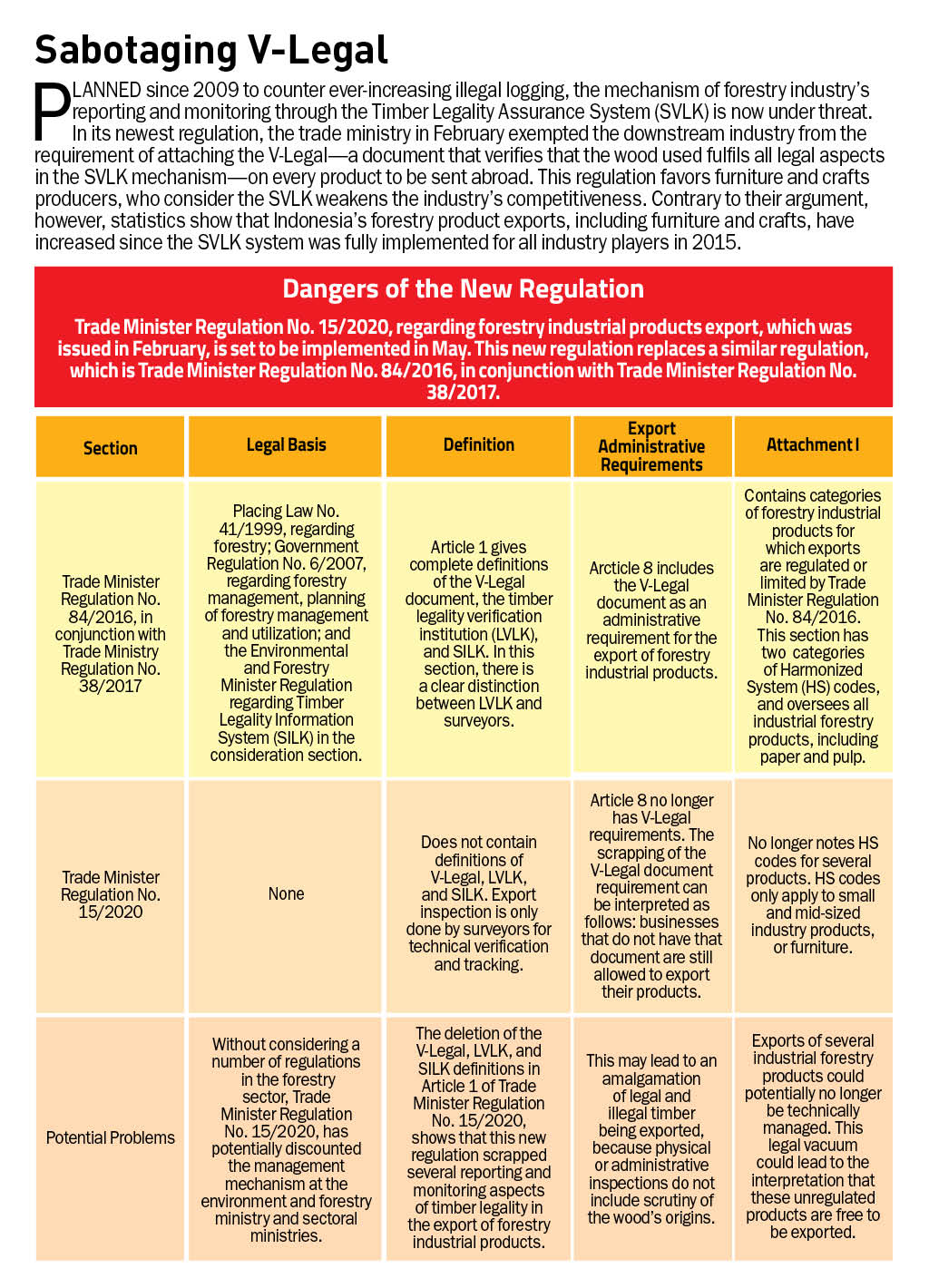 Trade Ministry Secretary-General Oke Nurwan gave a similar argument. This former trade director-general at the foreign affairs ministry said that many timber and furniture firms that do not export to countries requiring V-Legal have been complaining. “Demand from neighboring countries not requiring anything have not been met because products are halted here (at Indonesian ports),” Oke said when contacted on Wednesday, March 25.

Oke further said that if upstream timber industries are stringent in holding themselves to the SVLK requirement, then the legality of all downstream industry products are automatically verified. Thus, he added, the important thing now is to increase guarantees and tight monitoring on raw material upstream, which is the task of the forestry ministry. 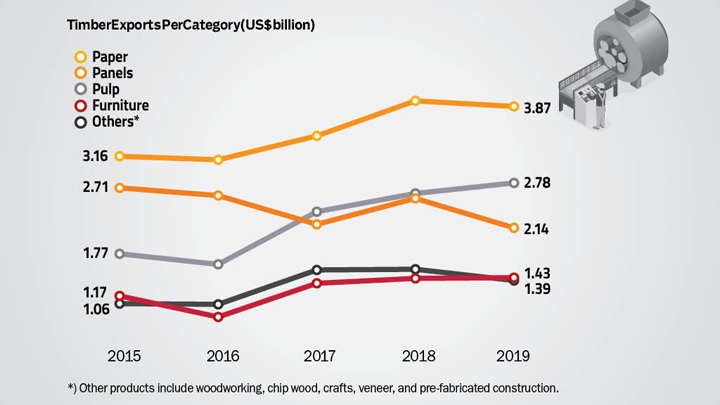 Timber Exports Per Category (US$ billion)

However, not all furniture businesses agree with the HIMKI and trade ministry. Robert Wijaya, deputy for regulations and certifications of the Indonesian Association of Furniture and Crafts Industries, does not see the SVLK as a stumbling block for the growth of wood furniture and crafts exports. On the contrary, the SVLK has strengthened Indonesian wood products’ bargaining position on the global market. “The recognition of the SVLK by the EU went through a long process, because it is indeed an effort to battle illegal logging,” Robert told Tempo on March 25.

He pointed to data showing that furniture exports went up after the implementation of the SVLK. The Central Statistics Agency even notes that the furniture industry is among the five industries with the biggest export growth in 2019, reaching US$1.95 billion, an increase of 14.6 percent compared to 2018. In the same period, craft exports rose three percent to US$892 million. 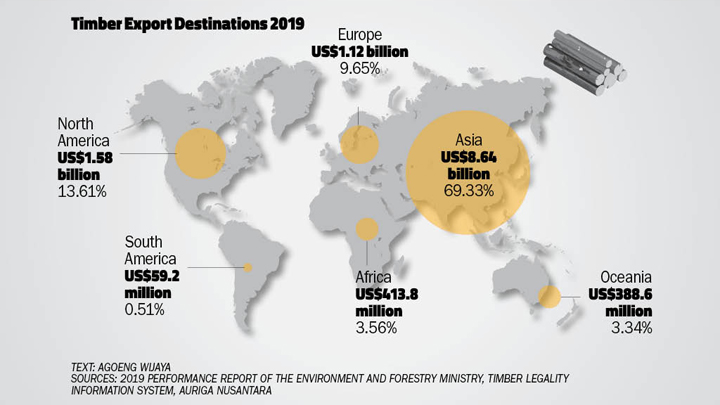 Robert further said that the cost to cover SVLK requirements is lower compared to obtaining international certificates such as that from the Forest Stewardship Council (FSC) and the Program for the Endorsement of Forest Certification. “FSC costs are two to three times more expensive that those of the SVLK,” he said.

Instead of issuing regulations that weakens SVLK’s function, Robert believes that the government should take other steps to spur furniture industry growth. For example, he said, the government should improve investment possibilities through facilitating permit legalizations, machine restructuration support, and industry access to bank credits.