The omnibus bill on job creation will be discussed in the Legislation Body. It could share the same fate as in the revision to the KPK Law.

AZIS Syamsuddin immediately sprang into action once he was given the go-ahead to lead a meeting at the House of Representatives’ (DPR) Consultative Body, after opening by Speaker Puan Maharani from behind a screen on Wednesday, April 1. The Deputy DPR Speaker asked faction leaders to convey their stances on the the Cipta Kerja (Job Creation) Omnibus Law draft. Azis told them to choose between holding the deliberation in a special committee or the DPR’s Legislation Body.

The United Development Party (PPP) Faction was first to deliver their stance. Other factions then took turns according to their share of seats in the parliament, from the smallest to the largest, the Indonesian Democratic Party of Struggle (PDI-P). “So that we may reach a mutual agreement for the deliberation,” Azis, the Golkar Party deputy chairman told Tempo on April 9, recalling the meeting.

That meeting was the first to be organized to discuss the Job Creation Bill among DPR leaders. Since submitted by the government on February 12, the draft took a long while before finally being discussed because Puan Maharani was reluctant to hold a leadership meeting. Puan requested the DPR and the government to first evaluate and disseminate the omnibus bill to prevent public unrest. President Joko Widodo said the draft is targeted to be passed in 100 days.

Three attendees of the meeting said that decision was delayed because the factions did not reach an agreement. The PDI-P, Democrat, and National Mandate Party (PAN) Factions wanted a special committee hold the discussion as the Job Creation draft law contains materials that need to be discussed by different commissions due to the various issues in it, among others land licensing, investment requirements, and labor. The draft law would also affect 74 existing laws. PDI-P Faction Secretary Bambang Wuryanto said his party wanted the discussion to proceed with care. “Not racing with time,” he said. 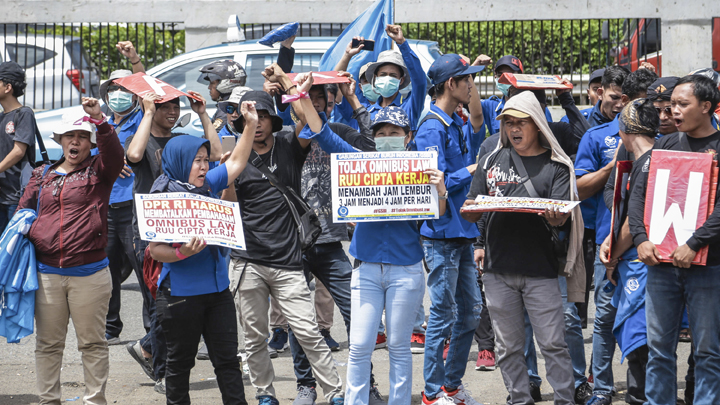 Three politicians with knowledge of the lobbying process said the PDI-P eventually relented and agreed to hold the deliberation in the Legislation Body. Other parties that initially are abstain then also agreed with that option. PPP Faction Secretary Achmad Baidowi said his party opted for discussion in the Legislation Body so that the evaluation may be conducted in a more orderly manner. Azis Syamsuddin said the Job Creation Omnibus Law will be discussed with the government on April 14.

Democrat Faction Deputy Chairman Benny Harman accuses his colleagues in the DPR of taking advantage of the coronavirus outbreak to accelerate the Omnibus Law’s approval. This situation, according to him, closely resembles the discussion of revision to the Corruption Eradication Commission (KPK) Law in the Legislation Body, back in September 2019. At that time, it took only 15 days for the revision to be passed. Prior to that, revision to the KPK Law was always rejected when discussed in both DPR’s Law Commission or special committee.

Benny is also concerned that bill’s discussion will take place behind closed doors, thereby allowing entry of smuggled articles. The closed nature of the discussion is already evident to Benny. He said that, during the first meeting of the Legislation Body to set schedule of the discussion on Tuesday, April 7, he was abruptly kicked out of the virtual session. “After that, I could not get back in, then suddenly a decision was reached,” said Benny. The decision, among others, orders each faction to immediately submit their laundry list of issues regarding Omnibus Law.

Supratman Andi Agtas refuted the allegation that discussion in the Legislation Body he leads is prone to manipulation and entry of smuggled articles. Discussion on the Job Creation Bill, according to him, will take place openly. The Legislation Body will begin the discussion from clusters with minimum rejection, such as those concerning provisions for special economic zone and micro and small to medium businesses. Matters of labor will be evaluated last. The Legislation Body will also invite all elements of the society, especially workers who are against the Job Creation Bill.

The DPR’s plan received numerous criticism. Confederation of Indonesian Trade Unions President Said Iqbal said DPR’s invitation to discuss the Omnibus Bill is just a masquerade. Whatever input the workers say, he said, will only be used as a stamp of approval by the House. Said affirmed that his federation will not be attending the deliberation meeting.

The House will also conclude the Criminal Code and the Penitentiary Draft Laws. The two draft laws have been discussed during the DPR’s 2014 to 2019 period. However, they were not passed because thousands of people went to the streets in demonstration to reject them.

These two drafts received public backlash because they contain a number of questionable articles. The Criminal Code Bill, for example, still includes articles concerning slander against the head of state and categorizes corruption, human rights violation, and terrorism as general crime. Meanwhile, the Penitentiary Draft Law makes it easy for convicts of special crimes, including corruption, to obtain parole.

Azis Syamsuddin said the carryover regulation states that a bill that has been finished in the deliberation does not need to be re-evaluated. The draft may also be discussed without a new letter from the president. Azis said he has consulted President Joko Widodo regarding this mechanism.

Justice and Human Rights Minister Yasonna Hamonangan Laoly confirmed that Azis has indeed met his boss. However, this PDI-P politician said that a letter from the president is still required in order to discuss the two drafts. “Rather than violating formal procedures and risk having problems, it is better to wait,” said Yasonna.