The Village in the Middle of the Siberut Forest - Outreach - magz.tempo.co Tempo Magazine | English Edition

The Village in the Middle of the Siberut Forest


The Mentawai culture is being expurgated by modern life. As we speak, in some villages local culture has almost reached extinction point. Yet the people of Simatalu on Siberut Island are still complying to their old traditions. In March, with the support from the Rainforest Journalism Fund at Pulitzer Center, Tempo correspondent Febrianti had a look at and recorded daily life in Simatalu village.

THE aroma of ripe fruit wafted in the air as we entered the deep forest region of Simatalu, West Siberut, Mentawai Islands, in West Sumatra in mid-March. As we walked, toktuk durian fruit—the soft-prickled durian specific to Mentawai—again and again fell onto the dirt track we were traversing as they ripened on the tree, oozing a tangy aroma from its yellow flesh. On the river banks, rambutan trees had turned bright red with the abundance of ripening fruit covering all the branches. Lanzones (Lansium parasiticum) trees were also well into their season.

The fruit season was indeed reaching its peak in the jungle of Simatalu. We, who were simply passing by, ate our fill all down the road to Simatalu. I was accompanied by Viator Simanri Sakombatu, usually called Bajak Letcu, a Mentawai tattoo artist. There was also Teu Taloi, a sikerei (shaman and traditional Mentawai herbalist) from Simatalu, and his son, Cristian, who had just completed high school.

Reaching Simatalu village is no easy feat. Going by sea, there is the risk of being battered by huge and dangerous waves on the western shore from the Indian Ocean. This was why we had chosen to come in by land using rivers and walking down the eastern coast of Siberut to Muara Sikabaluan in Northern Siberut.

Simatalu is a village within the Siberut National Park. The park designated in 1993 has a breadth of 190,500 hectares. The inner zone of the national park comprises a perfect forest, boasting huge trees and pristine little riverways flowing under them. The echoing cries of the bilou (Hylobates klossii) and the joja (Presbytis potenziani), the primates endemic to Mentawai, continually pierce the air. 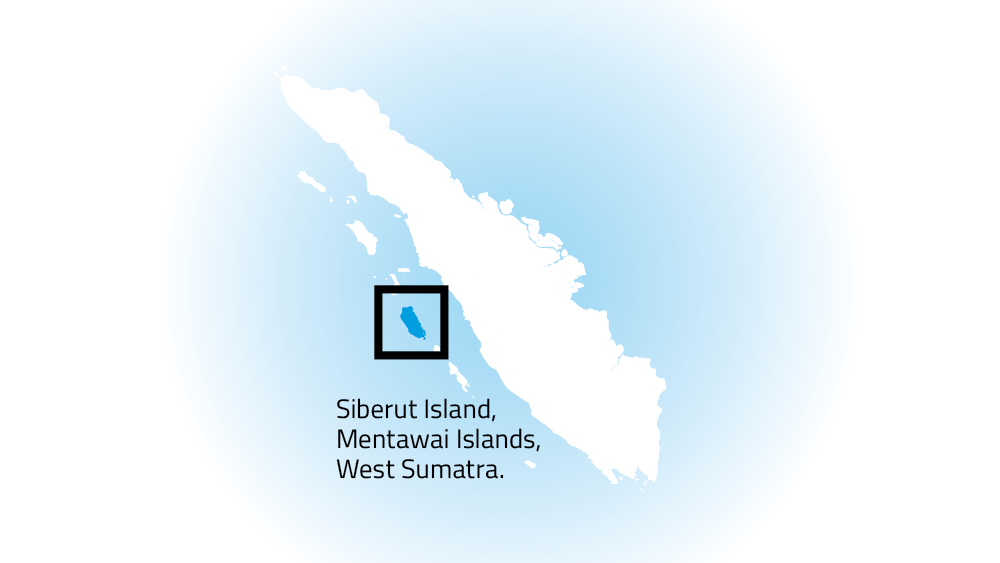 This national park is now the last stand for the forests of Siberut Island. All the other woodlands on the island have been made over into production forests. On the northern part of the island, Salaki Summa Sejahtera still operates under a forest concession. While in Central di Siberut there will soon be an industrial plantation forest underway.

The people of Simatalu in the inner region of the national park have maintained their old way of life. “I still hunt for monkeys, fell trees for firewood and make my own house and sampan boat. No park ranger comes to forbid me, because this too is my land,” said Teu Takbabalen, a resident of Simatalu village who lives in Sinindiu in the forest part of the national park.

Simatalu is known as the ‘origin village’ of the Mentawai tribe. People believe it is from this place on the western part of Siberut Island that the Mentawaians began and then spread out to the other locales of the Mentawai archipelago, to islands such as Sipora, North Pagai, and South Pagai. To date, the Mentawai culture can still be keenly felt in Simatalu. The people still build their homes in the uma way, the traditional wooden Mentawai house with rooftops made of sago leaves. The adult men of the village still wear the kabit, a loin cloth in place of trousers.

Nearly all the adult men and women sport tattoos practically covering the length of their bodies, from the feet to the chin. The tattoo motifs differ slightly from the motifs found in Southern Siberut.

Neary all the households on Simatalu have a sikerei. Sometimes the sikerei are a husband and wife team. In other parts of Siberut, a single village at most would only have one or two sikerei. The village health office allows the people to seek healthcare from the community health center, a sikerei, or a combination of both. Besides being very adept in herbal healing, sikerei are believed to have powers to banish evil spirits.

While in Simatalu, I stayed at the house of the head of Muntei hamlet, Julius Saleleu. Muntei is one of 12 hamlets in the village of Simatalu. This hamlet is neighbors to Sumalibeg hamlet on Muara Simatalu and was only established around 1990. It has a community health center, and a primary and a middle school. A Catholic church has been built on a hill.

Mornings in Muntei hamlet are busy times. The children rush off to school, while the grown-ups, both men and women alike, trudge the village road carrying rattan baskets and their pompong motors (outboard motors for their sampan) to the riverbank. They all head upriver to their fruit nurseries, harvesting keladi cassava and bananas, or to cultivate their herbs and plants.

Ester, Julius Saleleu’s wife, that morning also went into the forest with a female friend. They wore brightly colored wide-brimmed hats as if going off on a picnic. It was already high noon by the time they returned with big baskets filled with fruit. From afternoon to early evening, we were kept busy opening up toktuk durians and wolfing them down, followed by a feast of lanzones and rambutan.

The daily activities of the Simatalu comply to an old Mentawai saying: “Masua dere masua lolokkat” or “Keep your feet wet and keep your throat wet.” This favorite aphorism admonishes people to work hard to keep them in food. Their fields in the marshlands always keep the Simatalu people’s feet soaking wet as they work.

Planting and cultivating keladi and bananas and fishing in the rivers are work reserved for women. Teu Saraki, a female sikerei whose husband is also a sikerei, has to cultivate the keladi cassava near her home, seek firewood, then goes fishing in the river. She also keeps a keladi field upstream.

On top of that, Teu Saraki breeds a cackle of hens. To earn money, her husband, Teu Tulae, looks for manau or large-sized rattan in the forest and sells it in Muntei. They need cash to buy necessities from the stalls, things like rice, sugar, coffee, cigarettes, and books and clothing for their two school-aged children. 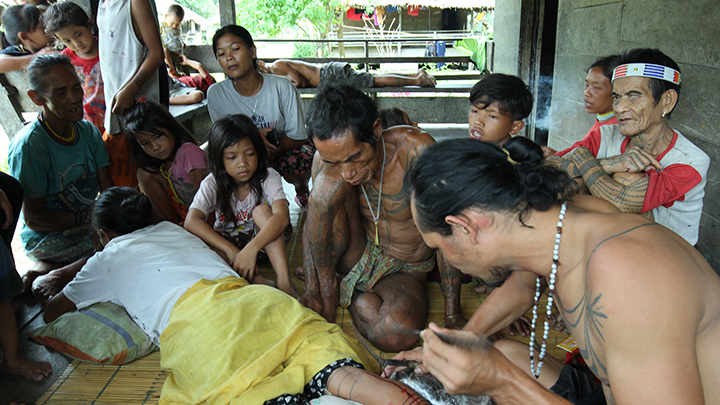 Teu Tulae and Teu Saraki also provide herbal treatments for other residents. “Here it is not difficult to find healing plants. They grow in abundance, especially in the forest,” said Teu Tulae.

Muntei hamlet head, Julius Saleleu, said food security in  Simatalu is solid and so they are protected from any crisis. “We have enough food here. Sago trees grow by themselves in abundance. Then we have keladi, freshwater fish, estuary fish, not to mention all those fruits.”

The abundant sago is made into sago flour every three months, with some types being made once a year, in the flowing riverlets. The sago flour is stored in tapri, baskets made of woven sago leaves covered tightly and buried neatly in rows in mud making them last for a year. Most families can consume up to a basket of sago a month.

Head of West Siberut subdistrict, Jop Sirirui, said that West Siberut, located within the national park, is the last stand for forestland in Siberut. “If there was no national park, for sure my region would be in as bad condition as other parts of Siberut, with drought for months caused by dire lack of water, such as in Saibi, or suffering floods as in North Siberut and Central Siberut, which have the forest concessions,” he said.

In West Siberut, fresh water sources continue to overflow. Residents are free to make use of forest produce so long as they employ traditional methods. “The forest is of utmost importance for the people of Mentawai because it is their life-source,” said Jop Sirirui.