Data on Covid-19 continues to be erratic. Central government has no synchronicity.

AT a closed meeting to discuss reports from the Covid-19 rapid response task force on Monday, April 13, President Joko Widodo asked that data of coronavirus victims be released to the public. Jokowi wished for the public to be able to access all data, not only data of corona positive people and those deceased from the virus, but also those being monitored and patients under medical supervision. “In fact all this data should be updated and (broadcast) more quickly,” said the President at the online meeting.

A month before, on March 13, Jokowi admitted the government had not revealed all data pertaining to the coronavirus to prevent mass panic in the community. Ever since Jokowi announced the very first corona positive case beginning of March, many believed the government was suppressing the numbers of victims, and their data was confusing and erratic at best.

Two days before the limited meeting, in another meeting held at the National Disaster Mitigation Agency (BNPB), the head of the Covid-19 rapid response task force, Doni Monardo, raised the issue of coronavirus data. Two officials present related how Doni, who is also chief of the BNPB, was incensed that there was discrepancy between task force’s data and that of the health ministry.

Doni instructed Head of the Task Force Expert Team, Wiku Bakti Bawono Adisasmito, to iron out the data problem. Wiku promised to give clarification about the discrepancy. Yet until Saturday, April 18, he still had not responded to Tempo’s request for an interview.

Head of the BNPB Center for Disaster Data, Information and Communication Agus Wibowo admitted there was no synchronized data on Covid-19. He said his agency gathered their data through regional BNPB offices. But BNPB data was left unpublished because it did not have the authority to release such information. “But we hold both sets of data here,” he said.

How unsynchronized the data is was evident on Monday, April 13. The central government had announced there were 16 additional corona positive cases in the Province of Yogyakarta making a total of 57 cases in that region. The province also had seven more corona-related deaths. Yet the Yogyakarta government said their total was 55 cases with seven new cases and six deaths.

Chief of the Yogyakarta Environmental Health and Disease Control Bureau, Irene, cannot pinpoint exactly where the discrepancy arises. But she is adamant her office holds valid data. “We take no holidays. The figures of medical check-ups are from Friday through Sunday,” said Irene on April 13. Before that incident, there have been two discrepancies of data from the central government, namely on March 13 and on March 27.

Yogyakarta Covid-19 Response Task Force Spokesperson, Berty Murtiningsih, believes the discrepancy arose because the central government included the corona-positive samples from patients under surveillance into the Yogyakarta data. In fact, she said, the precise origin of the samples were unknown. Deputy Head of the Covid-19 Rapid Response Task Force Secretariat Biwara Yuswantana said check ups on Covid-19 patients always comply to protocol set down by the health ministry.

Data discrepancy also occurred in Central Java. On April 15, the number of positive patients in that region numbered 292 people. This figure was far above the data released by the Central Java government totaling 234 cases. Central Java Governor Ganjar Pranowo deduces the error occurred as the results of the polymerase chain reaction (PCR) tests in his province were sent directly to the health ministry. The results, said Ganjar, were announced before they were submitted to the provincial government. Ganjar admits he often does not get all the test results of patients in his province.

The governor suggested central and provincial governments use a single integrated system. The mechanism should be hierarchical, from regency to city to province and finally be accumulated at the national level. Such a system is already in application in Central Java, said Ganjar. “My suggestion is for Jakarta to follow the lead of the provinces,” he said.

In West Java, a similar situation occurred. On April 15, at 2:20pm, the central government released data stating 530 positive cases, 76 healed, and 41 deceased. The regional government’s figures stated 540 positive cases, 23 healed, and 52 deceased. Chief of the West Java Health Office, Berli Hamdani Gelung Sakti, said he still does not know the cause of the discrepancy. “We’ve only been told the 10 extra cases are still being reconfirmed between Jakarta and Banten,” he said. 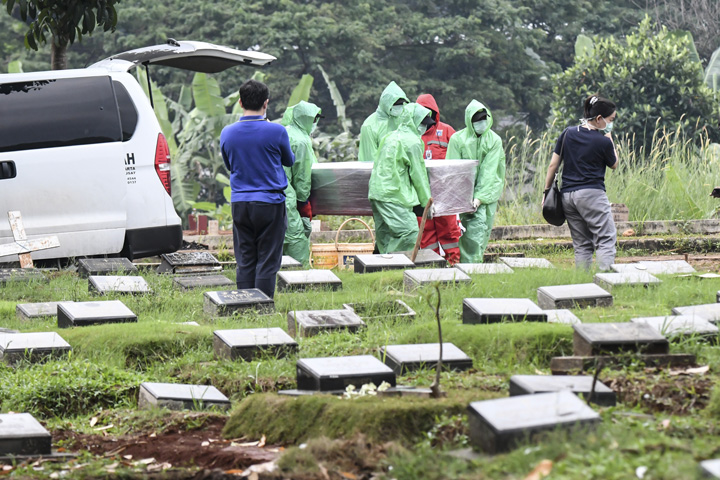 Berli claims that West Java is transparent in their handling of conrona cases. He pointed out that case mapping in West Java does not only showed the spread of positive cases at the regency and city levels, the numbers of people under observation and patients under surveillance, but also targeted occurrences at the village level. All data contains the initials of any patient confirmed corona positive.

Figures in the capital city that are announced are also suspected of being at odds with reality in the field. The parks and woodland authority of Jakarta has buried 1,035 bodies applying Covid-19 protocol up to Wednesday, April 15. Jakarta Governor Anies Baswedan stated 789 deceased were patients with Covid-19 synptoms, but laboratory tests have not all come in yet. Meanwhile, data announced by Covid-19 Task Force Spokesman, Achmad Yurianto, stated the number of deceased in Jakarta only totaled 246 persons.

A Jakarta city official said, Governor Anies Baswedan dispatched a special team to monitor all burials in the city complying to Covid-19 protocol. Anies stated the community has the right to know how many people have fallen victim to the coronavirus. According to Anies, such data is useful in the quest to quash the spread of Covid-19.

Member of the Health Ministry’s Special Staff, Alexander Kaliaga Ginting, said data released by the Covid-19 task force spokesperson originates from his ministry’s data and information center. He said epidemiological big data from his office should be the reference point for all other offices and entities. Thus, said Alexander, it is inappropriate if data about the pandemic is sourced from other entities. “Particularly since this is a non-natural disaster,” he said.

Ronald Bessie from the Covid-19 Guard volunteers said, data compilation concerning the pandemic should not become impeded because of bureacracy. The more expedient the assessment and data-compilation of cases, said Ronald, the more quickly one can find the most efficient strategies to combat it. The initiator of Report Covid-19, Rajawali, also said expediency in predicting new clusters are important to prevent further widespreading of the disease. “We are in a deadly race against the virus,” said Rajawali.