Many classrooms in Kupang Regency are constructed from makeshift materials. Some schools got assistance for renovation. It is for the sake of student safety.

IT was the rainy season in Kupang in East Nusa Tenggara (NTT). Yavid Soru has just finished rearranging the desks and chairs of his classrooms in Onitua Primary School, a futile effort in trying to protect the furniture from being drenched by the rain that continues to pour in through the inadequate roofing. He fears strong winds, not for himself, but for his students, who would be trapped in the classrooms should those strong winds collapse the roof in one fell swoop.

“In Onitua Primary School, we have three makeshift classrooms with roofing made from lontar (palm) leaves, weaved with sap. The floor is just soil. There is no ventilation, the classes would easily go dark,” said Yavid Soru, the school’s principal, when contacted in March. “These conditions really make education difficult.”

Onitua Primary School had submitted proposals for repairs to the local government repeatedly, but to no avail. But Yavid refused to surrender. “We build the classrooms ourselves, along with the help of students’ parents,” Yavid added.

Some organizations and individuals listened to Yavid’s calls. On February 24 and 25, the school officiated three newly constructed and furnished classrooms, courtesy of the NTT Village Empowerment and Development Advocacy Workshop, also known as Bengkel APPeK; Yappika ActionAid; and a number of donors.  In addition to Onitua, three other schools also celebrated the officiation of their new classrooms.

“There is a saying in Kupang that goes as ‘sekolah boleh darurat asal otak jangan darurat’ (schools can be madeshift as long as the learning is not makeshift). However, as motivating as this is, safety in makeshift classrooms is concerning,” Bengkel APPeK General Coordinator, Vinsensius Bureni, said in March.

With a staggering 79 percent of all the classrooms failing in providing safety for their students, the Kupang Regency government has identified the classroom rehabilitation and construction of new classrooms as a priority program. But still it is hard to realize it. Safety in education is still a big problem in Kupang.

According to Vinsensius Bureni, 48, the concept of safety in education is not inherent in the Kupang Regency. Even more so, Vinsensius told of his experiences growing up. Although many could not afford safety in education, many more could not afford education. “As a villager who was born and grew up in the village, I feel the reality of a life full of inequality and injustice. For this reason, Bengkel APPeK aims to bring the vulnerable groups such as children starved of education, to live equally with other villages in Indonesia,” Vinsensius said.

Growing up the way he did, provided Vinsensius and Bengkel APPek—a non-governmental organization (NGO) that carries out policy advocacy, vulnerable group empowerment and community development activities—the motivation needed to make great strides in Kupang’s educational landscapes. Beside assisting in building safe classrooms, APPeK, in collaboration with YAPPIKA ActionAid Jakarta, provides a program for the safety of students and the education process itself called ‘Sekolah Aman’ (Safe School). It aims to correct the structural issues of safety in education through a data-driven process.

Bengkel APPeK first conducted a study on the regional budget (APBD), as well as the current condition of education in Kupang Regency. From that field research, they then made policy briefs and found a discrepancy between the planning and realization of the government’s programs. 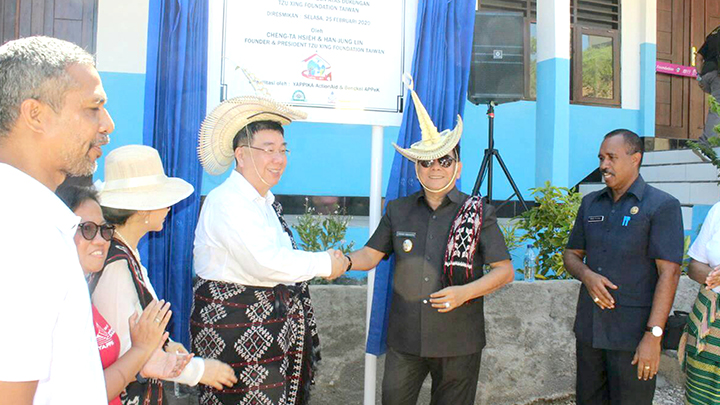 This indicates that the problem does not only lie with makeshift classrooms, poorly constructed roofing or even cracked building foundations. Something more fundamental and rudimentary is amiss, as shown by the fact that, as reliant as the Kupang Regency government is on the Specially Allocated Funds (DAK), it is another issue entirely to not use it optimally.

The accuracy in determining and realizing existing classroom rehabilitation plans continues to be a problem in the government’s classroom rehabilitation program. The act of replacing or ‘diverting’ school recipients in the process of repairing and procuring new classrooms has resulted from the lack of accurate data. “We acknowledge that the classroom rehabilitation program has its weaknesses. However, I need to clarify that the operators behind the Basic Education Data (DAPODIK) do not pay attention and record damages to school facilities due to certain areas not having any Internet connection and the lack of financial incentives,” said Kupang Regency’s Department of Education and Culture Chief of Primary Education, Pither Kase, in March.

But now, Pither added,  with NTT’s Public Housing and Infrastrucure (PUPR) office  taking over construction work in the program, they focus on providing training for DAPODIK operators and coordinate with school principals to ensure the accuracy and incentive in data collection. “Lately it has been better,” Pither said.

IT is not all doom and gloom in the Kupang Regency however. With Bengkel APPeK well on their way to correct the structural issues through the construction of new classrooms along with policy briefs geared to catalyze the solutions for Kupang’s systemic problems, another aspect necessary in ensuring the safety in education done by the NGO is the provision of a healthy and educational environment, on and off school.

As it is not uncommon to frequent stories of children dropping out of school due to falling to the wrong crowd in the Kupang Regency, Bengkel APPeK recognized that safety in education is not only in constructing buildings and roofs for classrooms or submitting policy briefs and standard operational procedures.

Instead, ensuring that safety is also a quality enjoyed afterschool is equally necessary. In Bengkel APPeK’s case, this has been achieved through the ‘Pos Baca’(Reading Room) initiative. Since the program began in July 2019, Bengkel APPeK has managed to set up 28 reading rooms in Kupang Regency. “The Pos Baca initiative is intended for students in the first, second and third grades, because the method is for children to learn in playing. However, because it has been considered very useful, even students and parents who were in the fourth to sixth grades also wanted to participate,” stated Vinsensius.

According to 28-year-old Rosaliana, mother of Valdino, a fourth grade student at Kotabes Inpres Primary School, Pos Baca afforded Valdino supplements to education Rosaliana can not afford. “We live in a village where people work in the fields, it’s hard enough for us to survive let alone to buy books. But with the Pos Baca program, Valdino once took a book home about firefighters. He has never seen them in real life. That book is his only chance, his window to the world, that I previously can’t afford,” told Rosaliana, in March.

In spite of this, Vinsensius acknowledges that a number of issues still remain. “In the future, we want to ensure the safety in education for diffabled children, poor or rich, they all have to receive education.”