Expanding Costs for the Biodiesel Program


The decrease of crude oil prices is endangering the biodiesel program. The price difference of biofuels and diesel fuel has driven up the amount of funds needed to pay incentives to biodiesel producers.

BEFORE decisions regarding organizational regulations and work procedures of the Indonesian Sustainable Palm Oil (ISPO) Steering Committee could even be made, the coordinating ministry for the economy was facing a new task closely related to the matter of palm oil. The drop in the world price of crude oil has made the government’s current program to mix biofuel and diesel fuel (biodiesel) uneconomical. “The strategy which needs to be taken is constantly being discussed now,” said Andriah Feby Misna, director for bioenergy at the directorate-general of new and renewable energy and energy conservation at the ministry of energy and mineral resources, on May 5.

The discussion Andriah is talking about has been going on intensively at the coordinating ministry for the economy since April. Before that, after a limited cabinet meeting held on April 21, Coordinating Minister for the Economy Airlangga Hartarto said that the government was monitoring changes to the price of Brent and West Texas Intermediate (WTI) oil.

The price of crude oil has been falling since the start of the year. The Covid-19 pandemic has resulted in a continual decline in demand for oil. Supplies are overflowing, and storage tanks at oil companies can hold no more. As a result, the price of WTI oil for delivery in May went into a freefall to minus US$37.63 per barrel in trade on the New York Mercantile Exchange (NYMEX) in April 20.

On Friday, May 8, Bloomberg noted that Brent crude oil was being traded at US$29.80 per barrel for delivery in July. WTI oil was going for US$23.91 per barrel for shipment in June.

Declining crude oil process have not only affected oil prices at home, but also B30 products which use a mixed fuel of 30 percent biofuel and 70 percent diesel fuel. “We are monitoring it because it is related to Biodiesel 30,” said Airlangga.

The Association of Indonesian Biofuel Producers (Aprobi) considers that the falling price of crude oil was unexpected. Aprobi General Chairman Master Parulian Tumanggor said that his association and the government are currently discussing its implications, especially regarding the aspect of funding to cover the price difference between diesel fuel and biodiesel fatty acid methyl ester which is made from palm oil. “This is not a normal situation,” he said.

The drop in crude oil prices triggered a decline in the market index price for diesel fuel. Simply put, if the price of oil goes down, the price of diesel products will also decrease. However, the price of biofuel will not necessarily drop. Further decreases in the crude oil prices could widen that price difference, especially if the rupiah continues to fall against the US dollar.

The energy and mineral resources ministry set the market index price of biodiesel fuels in April 2020 at Rp8,019 per liter, a decrease from the previous month when it was Rp8,933. This decrease was driven by the drop in the price of crude palm oil (CPO). However, that price does not include transportation costs, which is regulated separately in a decision of the energy minister.

The price of gasoil (low-sulfur diesel) on Monday, May 4, for instance, was going for about US$0.19 per liter. Assuming a middle range exchange rate at the Bank of Indonesia of Rp15,009 per US dollar, the price of diesel fuel comes to Rp2,894 per liter. There is a price difference of over Rp5,000 per liter with the market index price for biofuels. 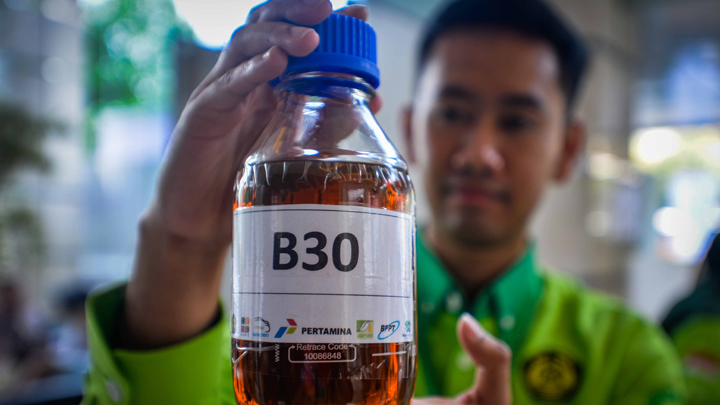 Sample of B30 fuel at the energy and mineral resources ministry, Jakarta, June 2019./ Tempo/Tony Hartawan

To date, this price difference between diesel fuel and biodiesel had to be covered by using funds from the Oil Palm Plantation Fund Management Agency (BPDPKS). These funds are deposited by players in the plantation business. As of December 2019, total funds received which are managed by the BPDPKS from collections on the export of oil palm and its derivative products came to Rp47.23 trillion. The realization on distribution of those funds reached Rp33.6 trillion, of which Rp29.2 trillion was for biodiesel incentives.

The government offers that incentive to support the program to mix biofuel with biodiesel. This is because the price of biodiesel is much higher than the price of diesel fuel. This means that the greater the price difference, the greater the amount of incentive funds needed. There is concern that the decreasing world price trend for crude oil and diesel fuel will widen this price difference. Such condition could endanger sufficiency of funds at the BPDPKS.

Harry Poernomo, a member of the Energy Commission of the House of Representatives (DPR) form the Gerindra Party Faction, said that it would be more economical if under these current conditions the biodiesel program is temporarily halted. “To avoid further losses,” he said.

The energy ministry notes that the realization on the distribution of biodiesel in 2020 is below target. In January, for instance, from purchasing orders for 789,640 kiloliters, only 699,500 kiloliters has been realized. Lower realization on orders has also occurred this past February and March.

According to Pertamina Spokesman Fajriyah Usman, the decline in the demand for biodiesel had occurred due to the Covid-19 pandemic. The large-scale social restrictions policy has resulted in a drastic decline in the amount of fuel used by the public. This is also true of the consumer industries, which have plummeted as a result of many factories not operating or operating at limited capacity. Fajriyah said that Pertamina is committed to continuing the biodiesel program to encourage the use of biofuels which are more environmentally friendly.

Aprobi Managing Chairman Paulus Tjakrawan added that now producers are making adjustments to their businesses to reflect the decrease in the volume of diesel fuel sales by Pertamina. Adjustments being made include the procurement of raw materials, processing times, manpower, and transportation (tankers). Business owners hope that the remaining capacity can be exported.

Director-General of New and Renewable Energy and Energy Conservation Sutijastoto believes that the downturn in crude oil prices and demand is a temporary condition. In the future, if the economy returns to normal, he is optimistic that the oil market will rebound. “Now, with the start of a commitment to reduce OPEC production, the oil price has crawled back up to about US$30 per barrel,” he said.

So far, the coordinating ministry for the economy has not yet made a decision regarding the biodiesel program, in particular about alternative funding to cover the price difference. “It is still under discussion, but more or less (it) hasn’t changed,” said Sutijastoto.

Aprobi is still enthusiastic, even though the government has not yet decided on the fate of the biodiesel program. According to Tumanggor, a laboratory-scale road test for B40—a product with a 40 percent biofuel mixture—is being conducted at the Research and Development Center for Petroleum and Natural Gas Technology. It is hoped that the testing, which began in January, will be finished in mid-July. After that, a 50,000-kilometer road test will likely begin, targeted for completion at the end of October. “The Covid-19 pandemic has disrupted the road test. We had hoped that the results would be in by September at the latest,” he said.