Deliberations on the Omnibus Bill is continuing in the midst of a recess period and at the height of the Covid-19 pandemic. Golkar Party is giving its full support.

DESPITE the House of Representatives (DPR) being in recess until June 14, Deputy Chair of the DPR Legislation Body Rieke Diah Pitaloka has been seen going to work in Senayan, Jakarta. The politician from the Indonesian Democratic Party of Struggle (PDI-P) has a perfect attendance in the deliberations on the Omnibus Bill on job creation. “I was assigned by the PDI-P General Chair (Megawati Soekarnoputri) to keep careful and detailed watch over deliberations regarding the Bill,” said Rieke when contacted Saturday, May 30.

Since being handed over to the Legislation Body on April 2, deliberations on the Job Creation Bill have been convened practically every week. In the third round period, beginning March 30 to May 12, the Bill’s working committee convened five times. Permission was granted by DPR Deputy Speaker from the Golkar Party, Azis Syamsuddin, for the Legislation Body’s working committee to conduct meetings during the recess.

This stance of the DPR has raised criticism from many sides. The Muhammadiyah Central Board is questioning DPR’s insistence on deliberating the Omnibus Bill. Chair of the Legal and Human Rights Council of the Muhammadiyah Central Board, Trisno Raharjo, said the Bill is disadvantageous to workers, farmers, fishermen, and the poor. Trisno also deems the Bill as containing the potential to cause environmental damage and plunder community land. “The bill provides special favors to the investment sector and pays scant regard to social interests,” he said.

Researcher on parlementarian and law-making issues at the Andalas University Constitutional Studies Center, Charles Simabura, assessed the DPR is taking advantage of the current dire situation. He pointed out the society is currently focused on the corona pandemic. Moreover, large-scale social restrictions are in place, making it difficult for the public to voice direct protest.

Rieke Diah did not deny that the many problematic articles in the Bill has given rise to criticism. But deliberations cannot be postponed because the decision had been made to forge on with discussions in the midst of the corona pandemic and during the DPR recess. To her view, the Bill could very well undergo drastic changes in the deliberations. “If necessary, we will change 90 percent of its contents,” she said.

As an example she cited how the requirements for establishing a cooperative, originally by three people in the Bill, has gone back to compliance to requirements in the Cooperatives Law, namely 20 people. According to Rieke, her own and a number of other factions are endeavoring for state-owned enterprise corporate social responsibility percentages for micro, small, and medium enterprises (MSMEs) to be raised to more than 20 percent.

Working committee member from the National Democrat (NasDem) Party, Taufik Basari, did not refute the view that the government’s draft of the Bill tended to favor the business sector. Thus, he said, other groupings, such as workers and the SME, need to be beefed up. “We are pushing for incentives for small entrepreneurs,” said Taufik.

The first meeting during the recess was conducted on May 20. One of the topics to be debated was the title of the law. The NasDem Faction, for example, suggested the title be changed to the Bill on Ease of Conducting Business. Taufik Basari’s reasoning was, nearly 80 percent of the Bill’s articles are related to ease in doing investment. In further detail, the Bill has only 19 articles pertaining to job creation, far less than the provisions on governing permits, totaling 1,086 articles, and ease of doing business, totaling 775 articles.

Working committee member from the Golkar Faction, Firman Soebagyo, elected to stay in compliance with the government’s title. According to him, the title coined by the government paid heed to relevant historical, sociological and jurisdictional aspects. PDI-P working committee member, Arteria Dahlan, chose to wait until all deliberations are done before deciding on the final title. “Let’s first look at the substance, and only then decide on the appropriate title,” he said. According to schedule, the meeting will recommence on June 3.

SUBMITTED to the DPR on February 12, the draft of the Omnibus Law stalled for awhile in the hands of the DPR leaders. Until the second session adjourned on February 27, the DPR top brass postponed reading out the president’s letter in the plenary session. DPR Deputy Speaker Azis Syamsuddin claimed, at the time he had pushed for the president’s letter be immediately read out. Thing was, he said, “The DPR’s highest authorities were not in accord.” DPR Speaker Puan Maharani stated she had no wish to discuss the Job Creation Bill in a hurry, considering how many community groups were protesting over much of its contents.

In fact, the Job Creation Bill had been officially passed into the 2020 National Legislation Program approaching end of January. Before the draft was submitted to the DPR, President Joko Widodo had gathered leaders of the coalition parties that support his presidency to the Merdeka Palace in a closed meeting on January 14. In that meeting, Jokowi also conveyed the discourse on relocating the capital city. “The President reiterated a number of planned government policies,” said PDI-P Faction Chair, Utut Adianto, who attended the closed meeting.

The stall in the DPR made Jokowi once again gather the leaders of the coalition parties on March 6. Deputy General Chair of NasDem Party Ahmad Ali, who accompanied General Chair Surya Paloh, related how the President directly asked how deliberations on the Omnibus Law was going. According to Ali, the President wished for the DPR to expedite discussion on the Bill. Indeed Jokowi had set the target for the Bill’s deliberations to be completed within 100 working days. But DPR leaders and House factions only came to an agreement to hand over the draft to the Legislation Body working committee in early April.

When met separately, four DPR politicians—two from Golkar—related how the precipitant deliberations on the Bill began had a lot to do with Airlangga Hartarto, Golkar Party’s General Chair, who is also Coordinating Minister for the Economy. The four were in accord that the Bill was Airlangga’s ‘dice roll’ in Jokowi’s eyes. Indeed, the President had tasked Airlangga to design the Bill’s contents. 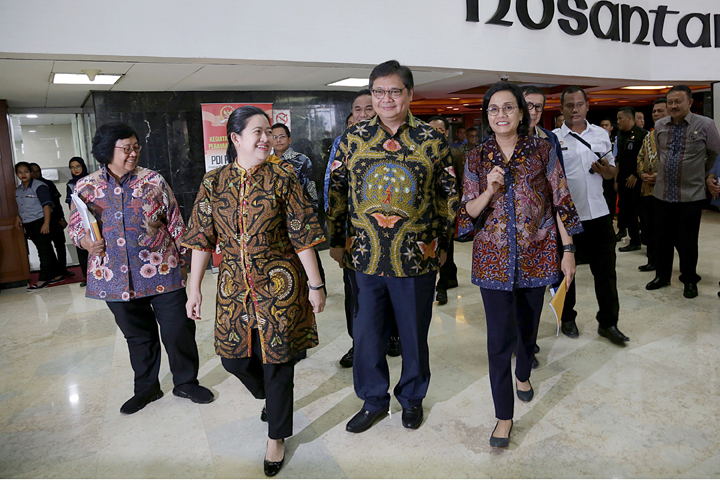 Airlangga had made guerilla maneuvers to a number of party leaders for the bill to be quickly drafted and done with. For instance, a day before Jokowi gathered the coalition parties leaders to the palace the second time, on March 5, Airlangga paid a visit to the home of the Democrat Party’s General Chair Susilo Bambang Yudhoyono in Cikeas, West Java. Four days later, he also raised the matter of the Omnibus Law when Surya Paloh visited the Golkar office in Slipi, West Jakarta. On March 12, it was the turn of the National Mandate Party (PAN) General Chair Zulkifli Hasan to drop by at the Golkar office.

Airlangga did not refute the opinion the meeting was for the Omnibus Law to immediately begin its deliberations in the DPR. “Of course, the general idea is so the deliberations will already be streamlined enough when sessions recommence in parliament,” Airlangga said on the occasion. Not only did he meet up with heads of political parties, Airlangga with several other ministers in the middle of March gathered leaders of DPR factions to explain the many issues in the Bill. PDI-P Faction Chair Utut Adianto said Airlangga explained the matter of changes in several articles, including in the cluster related to labor, which had been protested vehemently by labor unions and workers.

According to three DPR politicians, Airlangga also requested Legislation Body member from Golkar, Firman Soebagyo, to approach the factions within the DPR for deliberations to go smoothly. But Firman negated that he had lobbied other factions. “I only met them in the Legislation Body’s chambers,” he said. DPR Deputy Speaker from Golkar, Azis Syamsuddin, was reluctant to discuss the behest of his superior to expedite deliberations in the DPR. “Go ask for details to whomever told you that,” he said.

Nearing the beginning of deliberations by the Legislation Body, at first not all the factions were in accord to get things cracking. Two high ranking PDI-P members related how their faction had no wish to simply comply to the government’s draft. Neither did they wish to be shackled by the 100-day target to finish discussions, as was the behest of the President. To their view, there were still too many problematic articles needing review.

The Justice and Prosperity Party (PKS) Faction also at the beginning declined to dispatch one of their members to the working committee. But, according to PKS Faction Deputy Chair, Netty Prasetiyani, non-participation in the working committee meant they would be deaf and blind to new information. In the end, they changed tactics and dispatched members, and submitted an inventory of the problems they identified in the Bill. “We pushed all member factions to have their critical hats on,” she said.

Firman Soebagyo said the Covid-19 pandemic is providing momentum for the working committee to go ahead quickly with deliberations on the Bill. According to him, the pandemic has caused millions of people to potentially lose their jobs. Moreover, he said, the government also needs to quickly prepare the infrastructure and investment climate when the world returns to normal. If the regulations are not rapidly deliberated, Firman is worried investors will turn away from Indonesia. “We are thinking hard on how to create new fields of work,” he said.