A resident of Bengkalis, Riau, from the Sakai tribe, was sentenced to a year in prison and fined Rp200 million for cutting down some acacia trees on land claimed by a company. The judges are suspected to have misapplied the law.

BONGKU bin Jelodan said goodbye to his wife, Juli, on the morning of Sunday, November 3, 2019, as he went to clear some land in the forest in the Duri II District in Bengkalis, Riau, a work which he had begun the day before. The resident of the Suluk Bongkal hamlet in Bengkalis, had farmed the same plot of land there for years. He was planning on planting more bitter cassava there.

This father of four walked to the forest, which is about three kilometers from his home. Acacia and eucalyptus trees were growing on the 200 square meters of land which he was clearing. He cut down about 20 trees with a machete.

Bongku, 58, is a member of the Sakai tribe, an indigenous community in Bengkalis whose lives depend on the forest and river there. The Sakai tribe generally consumes manggalo, which is processed from both sweet and bitter cassava roots, as their staple food. This tribe is known to be nomadic farmers. They clear forest land to plant crops, then leave the land after the harvest so that the forest can grow back. “He was the one who provided cassava and river eels for our food,” said Juli when met at the house of a relative of hers in Koto Pait Beringin village on May 28.

Near nightfall, Juli received news that her husband had been arrested by security guards at Arara Abadi, a subsidiary of the Sinar Mas Group, which has an industrial forest plantation concession extending into a part of the forested area of the Suluk Bongkal hamlet. Security guards took that illiterate man to the Pinggir Sector Police Department. “He was questioned and detained there,” said Rian Sibarani, Bongku’s legal advisor from the Pekanbaru Legal Aid Institute.

Bongku was unable to return to his home as the case progressed. The Bengkalis District Court held the first hearing on February 24. On May 18, the panel of judges led by Hendah Karmila Dewi, with members Aulia Fatma Widnola and Zia Uljannah Idris, sentenced Bongku to a one year in prison plus a fine of Rp200 million or an additional one month of imprisonment. He was found guilty of breaking Article 82 clause 1-b of the Deforestation Prevention and Eradication Law.

That article says that anyone who intentionally cuts down trees in the forest without permission from an authorized official will be sentenced to a maximum five-year imprisonment and a maximum fine of Rp2.5 billion. However, Bongku’s legal team considers that he cannot be subjected to that law.

The Elucidation of Article 7 of the Deforestation Prevention and Eradication Law says that an indigenous community is the traditional community which still take sustenance from the forests from around where they live. “Bongku is a part of the Sakai tribe whose lives depend on the forest,” said Andi Wijaya, a member of Bongku’s legal team.

The Sakai tribe has been reliant upon provision from the forests around Bengkalis for decades. They have been proposing that a forested area around Koto Pait Beringin and other villages be named communal customary land since 2001. However, this request has not been granted by the government. “We have hunted, planted, and eaten from this forest since before the national independence, as our ancestors have been here a long time,” said Ridwan, the batin pembumbung—the title of a Sakai tribal leader. Deer, mousedeer, and pigs were hunted by the Sakai people during those times.

According to Ridwan, the lifestyle of the Sakai tribe changed when the government imposed some regulations. They were forbidden to hunt forest animals, some of which had protected status. They also often come into conflict with companies which have forest management concessions. The Sakai tribe is dejected by plantation companies cutting down the forests. “All of the plants and animals have disappeared,” said Ridwan.

Andi Wijaya said that the proposal for communal customary land was served as evidence in court. Bongku had only cleared land at one spot in that area, but it did not help acquit him of the charge.

According to Andi, Arara Abadi has been operating in Bengkalis since the end of the 1990s. When conflict heated up in the early 2000s, Arara and the Sakai tribe agreed to establish 7,158 hectares of land in the forested area around Bengkalis as communal customary land.

The legal advisors brought in an expert witness from the Malay Customary Agency of Riau to corroborate that agreement. However the testimony did not move the panel of judges. “Unfortunately, the government has still not resolved the matter of establishing it as communal customary land,” said Andi. 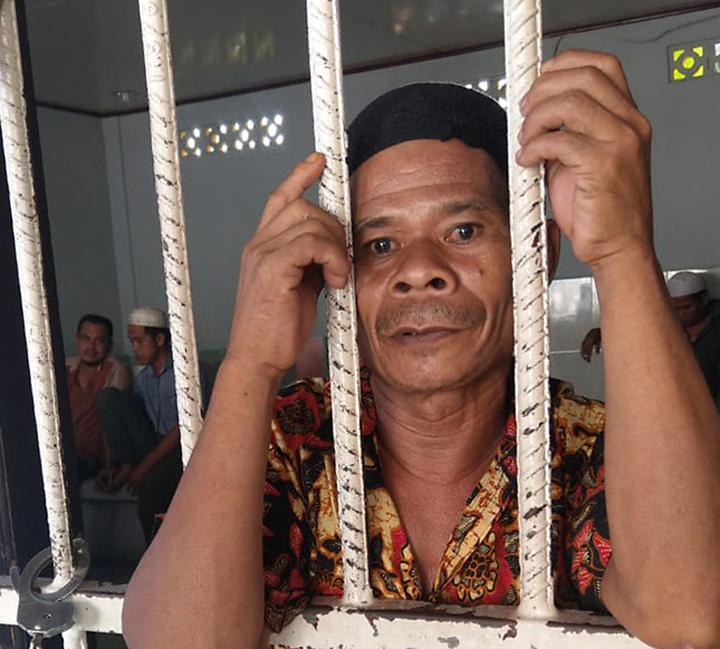 Nurul Huda, a spokesperson for Arara Abadi, said that their company has checked in the field regarding the claim about 7,158 hectares of communal customary land for the Sakai tribe. About 327 hectares of it are located inside the industrial forest plantation concession area held by Arara. This check, according to Nurul, found that the Sakai community never controlled the land in question. “In fact, the land claimed by the Sakai tribe is already controlled by a third party,” he said on May 29.

Nurul said that their company has attempted to empower the Sakai tribe. They often hold social activities and recruit people from the community for the forest fire prevention team.

Nurul regrets that there are still members of the Sakai tribe who are still attempting to occupy the land and get in the way of Arara’s operations. As a result, there is often friction between the company and people living around the concession area. “Bongku was once involved in an action to occupy the land together with the Riau Farmers Union in 2008 and was found guilty,” he said.

Rian Sibarani said that Bongku filed an appeal to the Riau High Court a few days after being found guilty of damaging the forest. The Pekanbaru Legal Aid Institute believes that the panel of judges inappropriately used the Deforestation Prevention and Eradication Law. That law, said Rian, targets structured and organized parties who are damaging the forest. “Moreover, Bongku had no commercial motives in clearing that land,” he said.

Bengkalis District Court Chairman Rudi Ananta Wijaya said that the verdict of the panel of judges was based on the facts of the court proceedings. According to him, the Bongku case is not complicated. “This case became slightly interesting when another party began using it for other interests, which we already know what the motive is,” Rudi said to Antara news agency on May 27. He did not explain who the party was or what their motives were.

Juli hopes that Bongku will be released soon. She never kept up with the legal arguments surrounding her husband’s case, even though the legal advisors often explained it to her. “We are not well-educated people,” she said.

She and her four children want to return to their 36 square-meter wood panel house. They left when Bongku was detained. No one has continued Bongku’s work. Juli said that she is unable to work the land herself.

The land which Bongku had been working on in the forested area of the Duri II District is now overgrown with brush. The trunks of the eucalyptus and acacia trees which he had cut down are gone. Juli has no interest in that land. “We only ask that he is soon released from the prison,” she said.