Playing With Fire for Some Normalcy - Cover Story - magz.tempo.co

Playing With Fire for Some Normalcy


Businesses are lobbying to push the government to put the so-called ‘new normal’ into effect amid the coronavirus pandemic. Unarmed with clear indicators, the government has instructed dozens of regions, some of which are still in the red zone, to return to quasi-normalcy. With still very few specimens tested, various experts are predicting a second-wave outbreak.

On the occasion, Rosan also relayed the complaints of businesses regarding the government’s move to prioritize economic stimuli for micro businesses and state-owned enterprises. “The President promises that stimuli will be made more equal and incentive policies for businesses will continue to be reviewed,” Rosan told Tempo on Thursday, May 28, in Jakarta.

According to Rosan, he has already frequently delivered complaints regarding the economy while engaging in discussion with various officials, such as State Secretary Pratikno, Coordinating Minister for the Economy Airlangga Hartarto, Finance Minister Sri Mulyani, as well as the President’s Advisory Council. Rosan told them that large-scale social restrictions (PSBB) has caused many companies to go bankrupt.

In early April, Rosan also wrote a letter to the President, recommending a budget of at least Rp1,600 trillion to mitigate the pandemic. The budget comprises Rp400 trillion to improve health care facilities, Rp600 trillion for social aid, and Rp600 trillion to stimulate corporations. The recommended budget is significantly higher than the budget already prepared by the government in the amount of Rp405 trillion.

Not long after the letter was delivered to the Palace, Kadin Advisory Council Chairman Mohamad Suleman Hidayat discussed its substance during a meeting with Minister Sri Mulyani. The former industry minister recommended for the government to immediately calculate the budget needed to cover the health sector, social aid, and economic stimuli. But, said Hidayat, Sri Mulyani did not give a definite response regarding the stimuli. 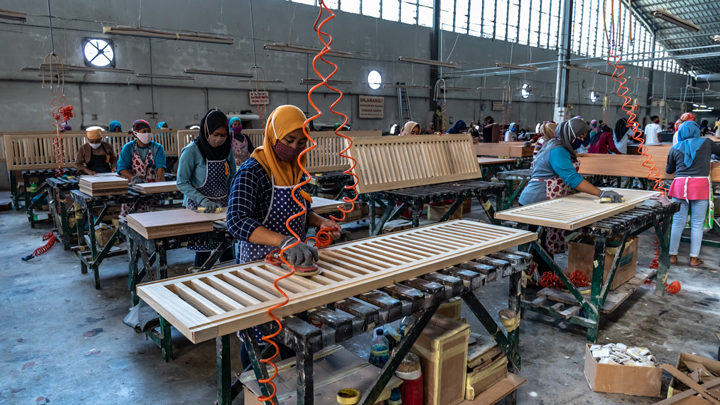 Workers wear masks and keep their distance to each other while working at a furniture factory in Demak, Central Java, May 30./ ANTARA/Aji Styawan

We have not been able to reach Sri Mulyani. Tempo’s phone calls and messages sent to her cellular phone have not been answered. But, on April 1, Sri Mulyani said she would enlist the Supreme Court and the Development Finance Comptroller (BPKP) to monitor how the economic stimuli are being channeled. She warned businesses not to deliberately bankrupt their companies in order to receive incentives during the pandemic. “We will seriously identify sectors that are piggybacking on those that are ailing due to the coronavirus,” she said.

During the PSBB, businesses have become more aggressive, including in lobbying various officials to have economic activities running again. Mohamad Suleman Hidayat admits that he has also been lobbying, but he refused to mention the names of officials he has approached. Member of the Coordinating Minister for the Economy’s assistance team, Raden Pardede, says businesses have also been lobbying his institution. According to Raden, business players have been complaining of their drastically decreased earnings and difficulty in paying their employees, not to mention electricity bills while the PSBB policy has been in effect. Raden explained that these business people are hoping that the government will provide incentives.

The Coordinating Ministry for the Economy has prepared a study on the phases of economic restoration during the coronavirus pandemic. Based on the slide presentation currently in circulation, the government will be reopening a number of business sectors in five stages, from June 1 to July 27. Raden says the study was made to help revive the economy once the pandemic has died down. “Economic restoration can’t be seen apart from the public health factor,” said the Kadin deputy chairman.

Indonesian Employers Association (Apindo) Chairman Hariyadi Sukamdani admits to communicating with three ministers around two weeks before Idul Fitri. Among others, he lobbied Tourism Minister Wishnutama. Hariyadi says the cash flow of businesses can only last until the end of June should the PSBB continue to be in effect. “I’m asking the government to be realistic, to live side by side with the virus and immediately begin running the economy while being on the alert,” said the Sahid Group boss. Wishnutama confirms that the communication did take place. “Current conditions are extremely disadvantageous to the tourism sector,” he said.

Recently, President Jokowi began recommending for the public to live side by side with Covid-19 in what is called the ‘new normal’. Quoting a statement by the World Health Organization (WHO) that the coronavirus will not disappear, Jokowi asks the public to stay productive while implementing strict health protocols. “As I stated before, make peace with Covid-19. Again, what’s important is that the public is productive, safe and in comfort,” the President said in an official release from the State Palace on May 15.

President Jokowi’s instruction to apply this new approach to the pandemic was expressed in a meeting with various ministries and institutions on May 20. An official who attended the teleconference said Jokowi asked for the new system to be based on science and to refer to WHO’s guidelines. According to the same official, all leaders of institutions agreed to implement the so-called new normal.

On May 28, BNPB Chief and concurrently Covid-19 Task Force Chairman, Doni Monardo, said some criteria will apply to regions that will implement the new normal, among others, the consistent absence or decreased number of corona cases. “Conditions may vary from region to region,” he said.

During the same teleconference, a number of ministers in the economic sector recommended the reopening of the mining, agriculture and plantation sectors. According to an official who attended the meeting, cities with large economies, such as Jakarta, Semarang, and Surabaya, will be prioritized. The same official says relaxation of social restrictions in these cities will be reviewed based on indicators recommended by various institutions. 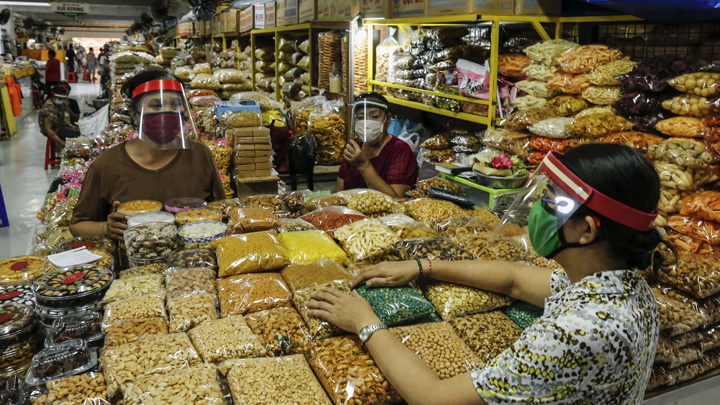 Traders wear masks and face shields on the first day of social restrictions at the Badung Market, Denpasar, Bali, May 15./ TEMPO/Johannes P. Christo

One day after the teleconference with the President, on May 21, the National Development Planning Agency (Bappenas) began drafting the indicators for relaxation during an online discussion with a number of health experts. Bappenas Director of Public Health and Nutrition, Pungkas Bahjuri Ali, says the economy and public health are factors that are being considered when drafting indicators for social-restrictions relaxation and the new normal protocols. “The new normal formula being drafted will apply to ensure that our economy will continue to work,” said Pungkas, who explained that the indicators will be completed at the end of the first week of June.

Panji Fortuna Hadisoemarto from the Padjajaran University Medical School, Bandung, West Java, who attended the meeting, recommended relaxing the PSBB not at once, but per region. Panji urged the government to follow WHO guidelines in drafting the indicators, such as epidemiological data, which covers daily new cases, the preparedness of health systems, and surveillance for Covid-19 cases.

Pandu Riono, an epidemiologist from the University of Indonesia, who was also present, disagreed with solely referring to WHO guidelines. He recommended other indicators, such as the number of patients under surveillance, positive cases, and deaths, as epidemiological variables. Pandu also refers to swab test trends and the proportions of stay-at-home individuals as public health indicators. Lastly, the number of available ventilators and protective gear should also be calculated when considering the preparedness of health facilities.

Pandu believes that the country is not ready to relax social restrictions and apply a new normal. According to him, epidemiologically, Indonesia is still in the red zone because its mortality trend has continued to rise, not to mention the fluctuating trend of Covid-19 positive cases. He warns that the government is not yet performing swab tests on a mass scale. “Very few tests are being done,” said Pandu.

As of May 29, the government had tested 205,250 specimens using the PCR test. Four days prior, or on May 25, Singapore had already performed over 330,000 swab tests. According to the Worldometer site’s data on May 30, Indonesia’s testing rate is at 1,100 per 1-million population. Indonesia is far behind Singapore and Malaysia, whose testing rates are 57,249 and 16,083 per 1-million population, respectively.

Chairman of the Indonesian Medical Association (IDI) Covid-19 Task Force, Zubairi Djoerban, also believes that the number of confirmed cases in Indonesia is far below real numbers. Like Pandu, Zubairi is worried that forcing to relax social restrictions and implement the new normal can potentially cause a second-wave outbreak.

AMID discussions on indicators for relaxation and worry about a potential second-wave outbreak, on Tuesday, May 26, President Jokowi announced that four provinces as well as 25 regencies/cities can begin preparing to implement the new normal. President’s Deputy of Protocols, Press and Media, Bey Machmudin, has released the regions that will soon implement the new normal. Even so, he denied that it was the Palace that determined the criteria for regions that will soon implement this new policy.

That same day, Jokowi instructed the police and the Indonesian Military (TNI) to monitor the streets to ensure that the people are obeying health protocols in the regions mentioned in the release. TNI Commander Marshall Hadi Tjahjanto says 340,000 personnel have been assigned to secure 1,800 locations. Doni Monardo, says the move to send TNI-police personnel to monitor the implementation of the new normal in four provinces and 25 regencies/cities is not meant to scare the public. “Only to help, so that the people will comply and obey health protocols,” he said.

Sidoarjo Regency in East Java is among the 25 regencies/cities that will enter this quasi-normalcy, although it is still a red zone with 609 positive cases as of May 29. Sidoarjo Health Office Chief, Syaf Satriawarman, says there are 18 new positive cases per day in his region. Furthermore, after Idul Fitri, Syaf had to isolate a village in the Waru subdistrict after 127 villagers were found to be infected with the coronavirus. “We had difficulty obtaining test results quickly because the laboratory in Surabaya was busy,” said Syaf.

Tangerang in Banten is also on the list. Tangerang Health Office Chief, Liza Puspadewi, says despite the decline in the transmission rate, now at three cases per day, her region still has trouble to quickly obtaining swab test results. According to her, the Tangerang City government still relies on laboratory in Jakarta, which means results can only be obtained in 10-14 days. “The data on positive cases that I have today is from May 15,” said Liza on May 27.