Leaving the Barracks to Fight Terrorism


The military is lobbying for support of a draft of a presidential regulation on military involvement in overcoming terrorism. Some circles are opposed this idea, seeing it as overstepping the military’s authority. The government is evaluating the draft.

COMING from his junior at the Strategic Intelligence Agency (BAIS) of the Indonesian Military (TNI), a telephone call made at the end of last May was immediately answered by Soleman B. Ponto. After some small talks, the colonel on the line asked Soleman to support the draft of the presidential regulation regarding the duties of the TNI in overcoming acts of terrorism. The justice and human rights ministry had turned the draft over to the House of Representatives (DPR) on May 4.

Even though he led BAIS from 2011-2013, Soleman has often openly voiced his opposition to that draft. Speaking to his junior, Soleman said that he could not support the draft regulation. The retired rear admiral explained that such a presidential regulation has the potential to disrupt the country’s legal system. This is because it says that the TNI can carry out deterrence, enforcement, and rehabilitation functions in dealing with terrorism. However, Law No. 15/2018 on the eradication of terrorism says that the perpetrators of terrorism are punished under criminal law. According to Soleman, the enforcement of civil law is the realm of the police, not the military.

Soleman also said that the regulation would be at odds with Law No. 34/2004 on the TNI, because it says that operations to overcome terrorism could be through a presidential decree. Whereas, the TNI Law says that mobilizing of TNI forces by the president must obtain authorization from the DPR. “This presidential regulation can become a dilemma for the TNI,” he said on Thursday, June 4. That military officer understood Soleman’s stance on the issue and said that he would report it to his superiors in BAIS.

It was not the only time Soleman was persuaded to support the presidential regulation. Some TNI officers then contacted him and held a virtual meeting. “There was a one-star general who called me as well,” he said. Soleman is reluctant to change his stance. He can understand the lobbying effort being done by BAIS, because that TNI intelligence unit was involved in discussing the revisions to the Terrorism Eradication Law from 2016 to its passing in 2018.

“BAIS has no interest in whether or not this draft presidential regulation passes.”

The TNI is also requesting the support of DPR members. Two members from the House’s Defense Affairs Commission and two members of the Legal Affairs Commission said that officials from BAIS and the TNI’s Legal Guidance Agency have begun seeking support by asking for the opinions of DPR members. According to one source, the TNI’s Legal Guidance Agency has also conveyed their analysis on the draft presidential regulation and the Terrorism Eradication Law.

Record from the TNI’s Legal Guidance Agency obtained by Tempo shows that the draft presidential regulation has been discussed for over a year with some government ministries and institutions. This presidential regulation is limited and constrictive in nature, because the use of TNI might only be done by the TNI commander and is based on a presidential order. This also applies to the area of TNI involvement, such as threats to the head of state, Indonesian representative offices abroad, and strategic vital objects.

BAIS E Director Brig. Gen. Rudi Rahmat Nugraha said that his institution has never tried to gather support to push the passing of a draft presidential regulation, including to Soleman Ponto or DPR politicians. “BAIS has no interest in whether or not this draft presidential regulation passes,” he said on June 5. Rear Admiral Anwar Saadi, Chief of the TNI’s Legal Guidance Agency, was reluctant to comment on the matter. “From whom did you get that information?” he said when contacted on June 4.

THE government has been working on a draft of a presidential regulation regarding the duties of the TNI in overcoming acts of terrorism since the passing of the revision to the Terrorism Eradication Law in June 2018. The coordinating ministry for political, legal and security affairs assigned some ministries and institutions to draw up a government regulation or presidential regulation which can be used as an ordinance derived from the Terrorism Eradication Law.

Sri Yunanto, who was a special staffer of the coordinating ministry for political, legal and security affairs at that time, said that their institution assigned the defense ministry to work on a presidential regulation about the TNI’s involvement. “They made a working group. We only received occasional reports on the developments,” said Sri Yunanto, who is currently an expert staff member of the Presidential Advisory Board. Bondan Tiara Sofyan, director-general of security potential at the defense ministry, verified the news that his ministry is where the draft presidential regulation was discussed. 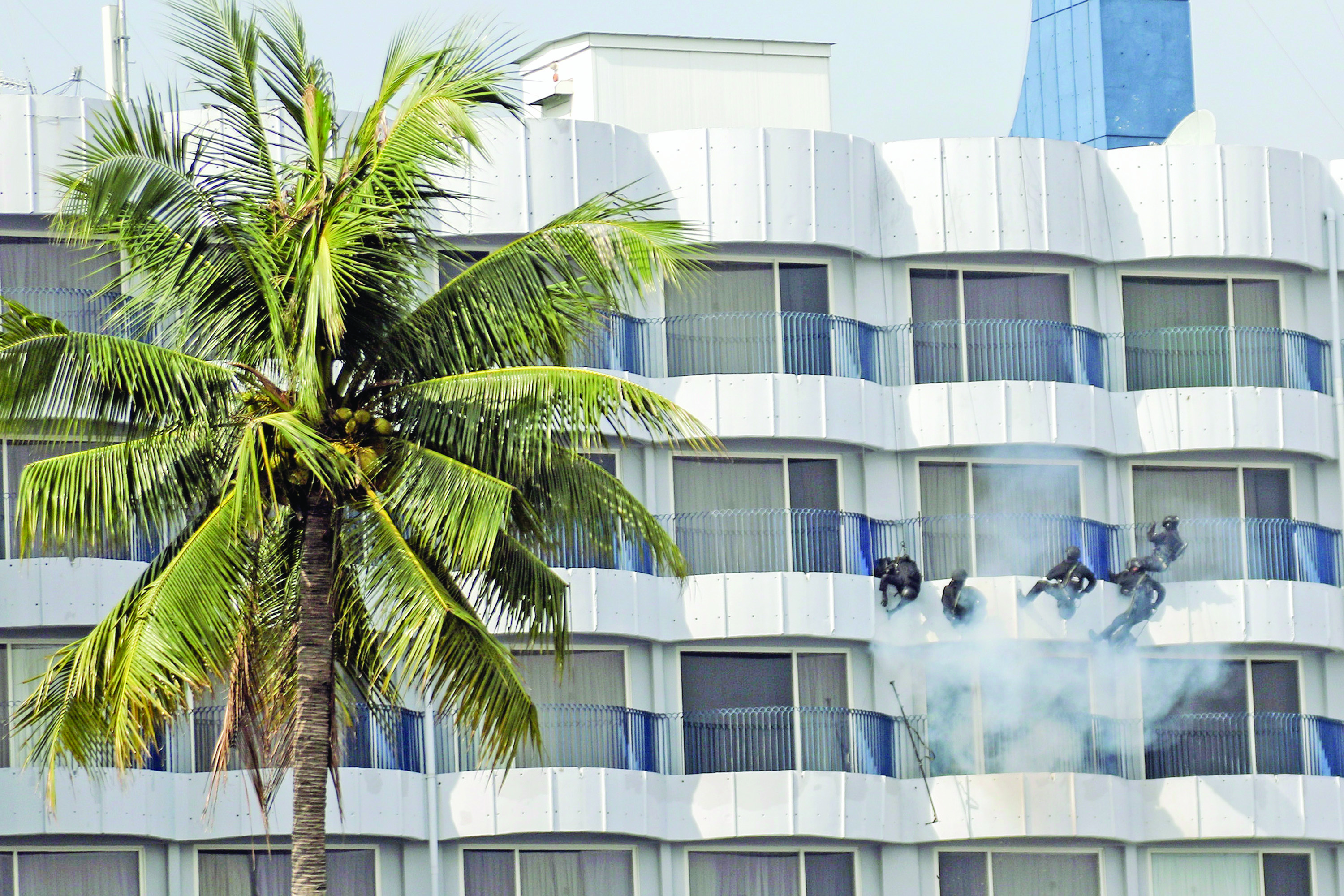 The discussion of that draft involved several elements of the military, such as TNI Headquarters and representatives of the Army, Navy and Air Force. Also included were the BAIS, TNI’s Legal Guidance Agency, and representatives of special forces in the TNI. BAIS E Director Rudi Rahmat Nugraha verified this. “All elements were asked to give their views so that the draft presidential regulation would be in line with the laws,” said Rudi.

Some of the opinions given were about the number of special forces needed, their operations and budgets. According to Rudi, BAIS gave input on how intelligence functions to search for information and analyze events. After this was finished at the defense ministry, said Rudi, discussion of the draft involved other institutions, including the Presidential staff office, at the end of 2019. They also asked for the views of civil society.

Before being handed to the DPR, the draft was taken to the justice and human rights ministry to be harmonized, so that it did not conflict with any existing regulations. Rudi said that discussion of the draft was often a drawn-out affair. “It was so drawn out and cautious that it wasn’t completed until this year. This is despite the fact that the law set a one-year time limit,” he said.

However, Arsul Sani, a member of the DPR’s Legal Affairs Commission, said that the draft presidential regulation submitted to the House resembled the early draft of the revision to the Terrorism Eradication Law which the government made in 2016. An example of this was the policy and strategy for eradicating terrorism being carried out by the National Police, TNI, and government institutions, being coordinated by a non-ministry institution which conducts counter-terrorism activity. “We delayed discussion of those articles in the past because we could not find common ground,” said this former member of the Special Committee on the Terrorism Eradication Bill, on June 3.

The future of those articles were still unresolved until President Joko Widodo stated his wish to have the TNI involved in dealing with terrorism. “Give authority to the TNI to be added to this Bill,” he said in 2017. The deliberations on the Terrorism Eradication Bill, which had stopped at that time, finally resumed after the Surabaya bombing incident in May 2018. The President sent an ultimatum that he would issue a presidential regulation in lieu of legislation if the deliberations were not completed. The DPR accelerated the deliberations and added military involvement in non-battle operations, the execution of which was to be regulated by a presidential regulation.

Just like Soleman B. Ponto, Arsul Sani considers that the draft of the presidential regulation submitted to the DPR mixes up a military and law enforcement approaches in dealing with terrorism. “A presidential regulation should determine the level of terrorist threat as the condition for the involvement of the TNI,” said the secretary-general of the United Development Party (PPP). He hopes that the government can make improvements to the draft.

Choirul Anam, a member of the National Commission on Human Rights, said that this draft will likely drag the TNI back to the times of Suharto’s New Order and has the potential to violate human rights. This potential can be seen in the TNI being allowed to conduct intelligence and other operations. He pointed out that this presidential regulation positions the president as the person who is mainly responsible for TNI operations, as it does not state any need to consult with the DPR to mobilize military forces. “The President needs to be prudent,” he said.

Choirul Anam suggested that it would be better for the TNI to complete the unfinished work on the mandate of the 1998 reformasi rather than get involved in the crime of terrorism, which is not under their authority. For instance, they could make improvements to the military court and increase their level of modernization and professionalism. “In keeping with the reformasi saying, the military needs to return to the barracks.”

This wave of criticism has led the government to take another look at that draft presidential regulation. Rumadi Ahmad, the primary expert at the 5th deputy office at the Presidential staff office, said that his institution had an internal discussion about the draft at the end of May. In addition to talking about the matters highlighted by the public, said Rumadi, the deputy office studied the matter of funding TNI measures to deal with terrorism, which according to the presidential regulation can come from regional budgets or other sources. The TNI Law says that state defense funding may only come from the state budget.

The Presidential staff office has asked the defense ministry about this matter. According to Rumadi, the defense ministry explained that that provision refers to the Law on National Resource Management for State Defense. “That point is still in discussion and no decision whatsoever has been made regarding it,” said Rumadi on June 3.

Two government officials said that the coordinating ministry for political, legal and security affairs also held some meetings to reassess that draft presidential regulation. When asked for comment, Coordinating Minister for Political, Legal and Security Affairs Mahfud Md. did not respond to telephone calls and messages sent by Tempo.

In the DPR, some debate over that draft presidential regulation was raised in the Defense Affairs and Legal Affairs Commissions. One point of contention had to do with which House body would deliberate that draft. Two members from the Defense Affairs and Legal Affairs Commissions said that the future of that draft would likely be determined by which commission deliberated it. However, Azis Syamsuddin, DPR Deputy Speaker for Political, Legal and Security Affairs, said that they have not even received the draft yet. “It is not on my desk as of yet,” said the Golkar Party politician.

DPR Defense Affairs Commission members Dave Laksono from the Golkar Party and Effendi Simbolon from the Indonesian Democratic Party of Struggle (PDI-P), verified the news that their commission wants to host the consultation on it, because that presidential regulation mostly has to do with the TNI, which is their working partner. House’s Legal Affairs Commission members Sarifuddin Sudding from the National Mandate Party (PAN) and Benny K. Harman from the Democrat Party Faction, said that the draft needs to be discussed in their commission because it is related to law enforcement.

Both Sarifuddin and Benny said that they heard information that the police have also begun asking for the legal views of House members regarding that draft. “This has become a topic of discussion because the police have a problem with it,” said Benny. Inspector Gen. Argo Yuwono, chief of the National Police’s public relations division, did not respond to an interview request. Inspector Gen. Martinus Hukom, chief of police counterterrorism Special Detachment 88, was reluctant to comment on the draft.