Local landowners in Central Maluku claimed that DPR member Sihar Sitorus had broken his agreement over the profit sharing of his palm plantation. They suspect Sihar of making changes to the contract unilaterally. Locals had hoped to get Rp2 million each month for every hectare of land they entrusted to Sihar, but in reality they only get Rp70,000.

AT a villager’s home in Kobi Mukti, Central Maluku in Maluku Province, about 100 people ended a one-hour discussion on Wenesday morning at the end of April. They came up with a decision to close the road going to the site of plantation company Nusaina Agro Huaulu Manise. The firm is owned by Sihar Hamonangan Sitorus, member of the House of Representatives (DPR) from the Indonesian Democratic Party of Struggle (PDI-P).

That was not the first time residents from numerous villages, such as Kobi, Siliha, Kabohari, and Maneo, decided to close the road. Over the last two years, they have blocked access to the company’s plantation for a number of times. The last time was in early May, an act that almost led to a clash between residents and the security officer of the company.

The road-blocking was a protest against Nusaina Group, the parent company of five oil palm firms in the region—owned by Sihar. Local said the company had not paid dues over the use of their land as plantation areas. “We will keep blocking the road until the company pays what they owe to landowners,” Jakaria Fabanyo, coordinator of the indigenous community group, said in April. 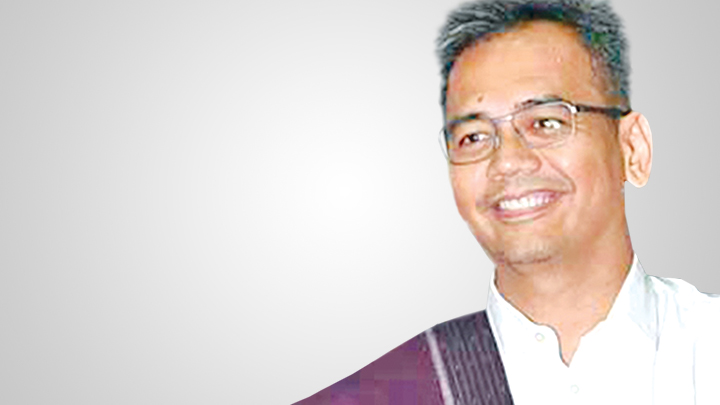 According to Jakaria, since the first harvest in 2013 until May this year, the company has never paid the partnership fee for around 4,000 hectares of community land. These partnership plots are located in the villages of Kobi Mukti, Aketernate, Maneu, and Kabuhari. Jakaria knows the sizes of the lands because some landowners gave him power of attorney to demand partnership fees to the company. Jakaria suspected there are many other landowners who had not received payments from the Nusaina Group.

At the end of 2019, Tempo saw that Kobi Mukti village and the areas surrounding it were planted with thousands of palm trees that were bearing fruits. On those 3 to5-meter trees, there were marks of harvest.

Soleman Datsun, a measuring staff at Nusaina Group, confirmed that some landowners have not yet received their partnership fees. “Some of them are from Siliha village,” he said.

Contacted several times via WhatsApp, telephone and video calls, Sihar Sitorus seemed reluctant to address the issue. He said he had read the interview request letter sent by Tempo. “I have read the questions and they seem tendentious. I have the right not to respond,” said the former North Sumatra deputy governor candidate at the end of April.

PLANTING oil palm in Central Maluku, Nusaina Group establishes partnerships with local residents. This partnership pattern is bound through a notarial deed. The company gets a profit share of 70 percent per hectare every month, and the remaining 30 percent goes to the landowners. The profit-sharing scheme is applied since the company harvested oil palm.

It was said that in 2008, Sihar Sitorus—son of ‘Medan’s Oil Palm King’ Darianus Lungguk Sitorus—began promoting this partnership. Jakaria Fabanyo said that the community joined the partnership in stages, from 2009 to 2015. “The partnership has a contract period of 30 years,” he said. 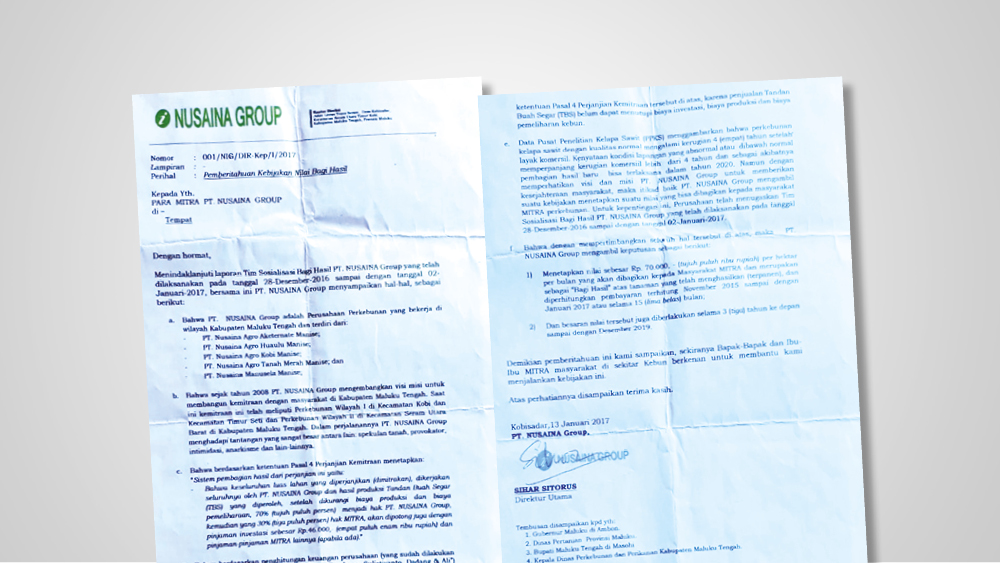 The 15,000 hectares of partner land belongs to hundreds of families. Some lands are under families’ names or kinship groups, churches and customary lands. The first land managed by Nusaina as a palm nursery area is a 1,206 hectare plot belonging to the Maluku Protestant Church in the Wahakaim hamlet, Aketernate. In addition, there are also 705 hectares of transmigration lands in the partnership, located in Tanah Merah, Waiasih, Seti Sumah, Waimusi, Namton, Waimusal, Kobi Mukti, and Marasahua.

Former Regent of Central Maluku, Abdullah Tuasikal, said he also partnered with Nusaina. He owns 97 hectares of land in Kobi Mukti, managed by Nusaina. He said that he co-owns the land with Zainuddin a.k.a. Obed, a Kobi Mukti villager who took care of purchasing the land from its former owners—Herman Kohunusa and Ramli Tobaru—in 2003. “It’s a land I own together with Pak Obed,” said the DPR member from the National Democrat (NasDem) Party.

When Nusaina began harvesting oil palm in 2013, the community demanded their share as stated in the agreement. But, the payment never came. Later, Nusaina actually lowered the amount of cut that landowners get to just Rp70,000 per hectare. The landowners found out about it after receiving a letter from Sihar Sitorus on January 14, 2017. 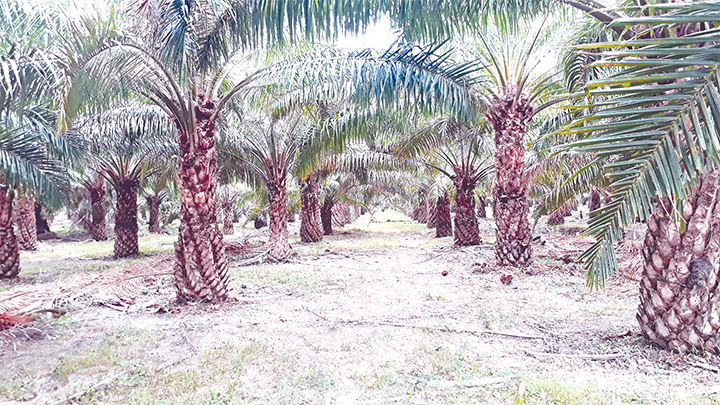 Signing the letter as chief executive officer (CEO) of the five companies under Nusaina Group, Sihar wrote that Nusaina could not fulfill the profit sharing agreement in accordance with the initial arrangement. The reason being, he said, was because the sales revenue of fresh palm fruit bunches cannot cover the investment, production and maintenance costs. The company imposes part of the costs on land owners. In his letter, Sihar referred to the notarial deed agreement which stated that investment costs for palm oil management were jointly borne.

Sihar also based his decision on the audit result by public accountants Doli, Bambang, Sulistiyanto, Dadang, which stated that the company invested Rp46 million per hectare for planting oil palm. To cover for the cost, 30 percent or Rp13.8 million is charged to the land owners. The money is taken from the partnership fees that landowners should have received each month. The cut is done in stages, for 25 years.

Sihar also referred to a study by the Oil Palm Research Center, which states that oil palm plantations with normal quality will suffer losses for four years after being commercially viable. Nusaina then decided that the community would get a partnership fund of Rp70,000 per hectare for four years, from 2015 to 2019. Jakaria Fabanyo said the change was never discussed with the landowners, who had believed they were going to get Rp2 million per month. “You can say that the company has deceived the land owners,” said Jakaria.

The matter becomes even more problematic because not all landowners agreed to have their lands managed by the company. Some of them said they were not involved in the making of the land-partnership deed—only to have been represented by village officials. The notary who handled Nusaina Group’s partnership deeds, Risa Nurliawati Soulisa, said that there were several process of making the agreements. Some land owners or the persons given the power of attorney came to her office in Ambon, Maluku. Others are met directly in the village. “It’s okay to be represented,” Risa said.

Daniel Ilela, a resident of Waiasih village, accused the company of overtaking some 200 hectares of land belonging to the kinships of Masauna and Halamury. “Our customary land is planted with oil palm without prior agreements. The company said that the land is part of a transmigration area,” said the heir of the Halamury clan. 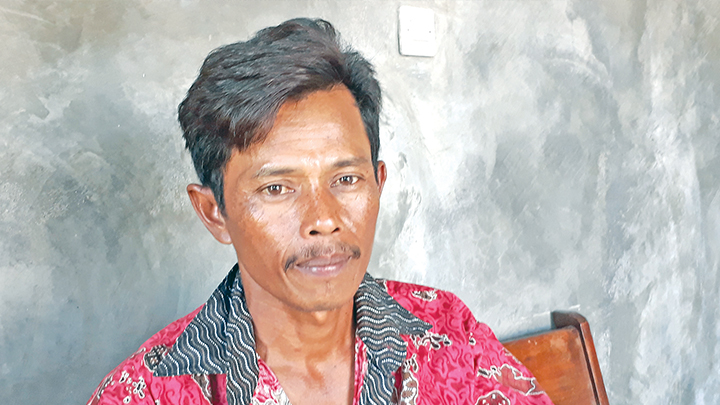 The family lands of Halamury and Masauna are located side by side with a land owned by transmigrants in Waiasih village. According to Daniel, after around 90 families signed partnerships with Nusaina in 2009, Nusaina Agro Kobi Manise participated in managing the land belonging to the two clans. Locals had rejected and resisted against the clearing out of cocoa plants that grew in the area. Regardless, the company cleared the area.

Several years later, Nusaina seemed to acknowledge that the lands belonged to the two clans. Daniel said the acknowledgment was shown in a land purchase agreement between the heirs of both families and Nusaina on June 20, 2017. The deed said that the two families sold 160 hectares of their land to Nusaina for Rp6 million per hectare. The company gave a down payment of Rp100 million.

Five months later, the two families annulled the agreement and were willing to give back the down payment. Daniel said they decided to call the deal off as it actually incur them losses. “What we want is for the company to lease the land, so that our descendants can enjoy the profit,” he said. 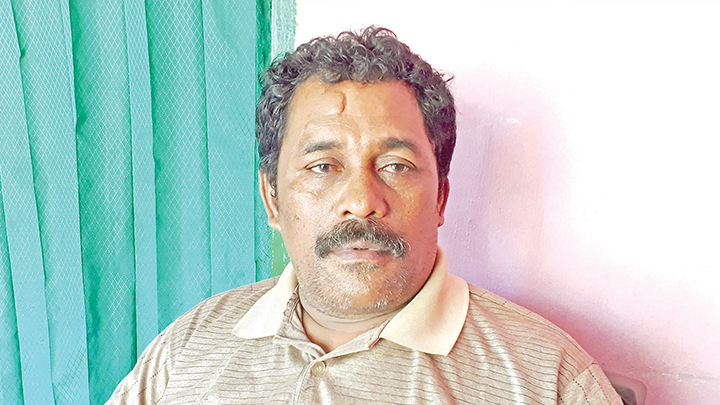 Mezak Soakakone, acting chief of the Central Maluku Transmigration Office, confirmed BPN’s decision. Mezak said that in addition to land takeover, Nusaina is also suspected of violating rules in implementing the partnership cooperation. The rule stated that transmigration land should not be sold or leased. “If it is leased, where would the transmigrants farm?” Mezak said. He added that he had conveyed this suspicion to the company and the transmigrants, but the partnership still stands.