TEMPO magazine of the June 9-15, 2020 edition published an article, The Unlucky 13th Hideout.

THE report contained information and an image that is not the truth and in my view is libelous and defamatory. It concerns the news about my marriage with a man named Kardi bin Watar, carrying a picture of the marriage book. I have an objection to the publication of the news and the picture and herewith exercise my right of respond.

- The publication of my unregistered marriage with a man named Kardi bin Watar listed on November 19, 2001 and an image of marriage certificate, according to Tempo, from the Bekasi religious affairs office in West Java, dated January 20, 2004, gives rise to public opinion or assumption that the siri (unregistered) marriage has indeed occurred. The fact is that I have never been married to the man by the name of Kardi bin Watar. Moreover, so far my official status has remained the wife of Nurhadi.

- The marriage book picture in the magazine’s report is an information that was invented and used by somebody with ill intent, who was my former driver named Aang, to threaten certain persons in order to give some money for his private interests. The fact is that my child, Rizqi Aulia Rahmi, has once been intimidated and asked to give Rp10 million by a man named Aang. The man named Kardi and some of my colleagues in the Supreme Court also became victims of my ex-driver in 2016. My child Rizqi Aulia Rahmi, the man named Kardi, and my colleagues in the Supreme Court are ready to bear witness to or be interviewed about this fact.

- Upon further examination, the issue of the marriage along with the marriage book picture depicting my unregistered marriage to the man named Kardi bin Watar has nothing to do with the report conveyed and renders the news unfocused.

As a victim, along with my family, I feel we have been defamed by the misleading news. Apart from that, I deplore the team of Tempo that failed to make checks and rechecks with me in compiling the report.

Thank you for your reply. We obtained the information from four resource persons and then sought the confirmation of the attorney of your family—Ed. 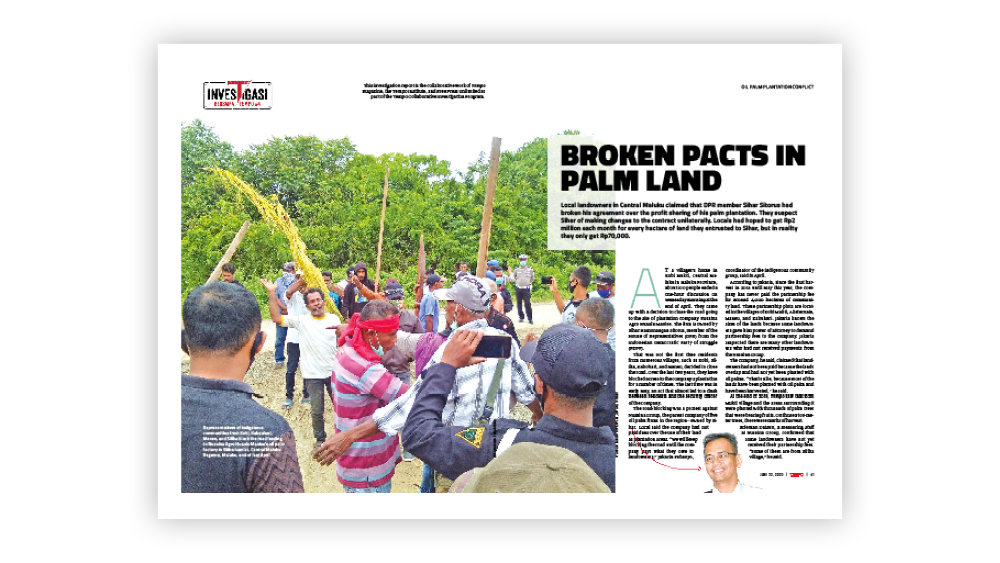 1. The photo caption in the article: “Representatives of indigenous communities from Kobi, Kabauhari, Maneo, and Siliha block the road leading to Nusaina Agro Huaulu Manise’s oil palm factory in Siliha hamlet, Central Maluku Regency, Maluku, end of last April/Syahdan Fabanyo”. The Petuanan Negeri Kobi was struggling to regain the indigenous community lands controlled by speculators. We suspected there were illegal transactions by using false documents and acting as if the land were privately owned rather than communal land. That was why we sent a letter to Nusaina Group so that profit sharing goes to the Petuanan Negeri Kobi.

2. Regarding to photo caption, the Petuanan Negeri Kobi declares non-involvement in the event mentioned. The incident in the photo happened on March 27, 2020, which was the closing of the Nusaina access road by several people allegedly paid by land speculators. This blocking was an act of legal violation.

Those in the photo are Yonas Boiratan, Ahmad Dani Boiratan and Yoel Boiratan. To the knowledge of the Petuanan Negeri Kobi, the Boiratan clan has already received a share of the profit. The photo also featured Else Ipaana, chairman of Saniri Maneo who already got paid and received a share of the profit from the land. There are also Jakaria Fabanyo and Din Fabanyo. We have no knowledge of the two’s interests. As far as we are aware, Jakaria and Din have no land located in the area of partnership with Nusaina. Din Fabanyo is the father ofi Syahdan Fabanyo, who name was included in the photo credit.

2. The wealth of the Petuanan Negeri Kobi is the communal land. We have even allotted some part of the communal customary land to the government as a transmigration area.

With the above descriptions, we hereby state:

- The Petuanan Negeri Kobi is the party authorized to regulate the communal customary land of Negeri Kobi.

- The control of Petuanan Negeri Kobi’s communal land that fails to comply with the local custom and the Village Law is a criminal act of embezzlement or criminal act of corruption of negeri’s assets.

- The Petuanan Negeri Kobi requests that the corporate personnel falsifying documents to manipulate communal land into privately-owned land be subjected to legal processing based on the laws in force.

- President Joko Widodo is currently undertaking the distribution of land for people’s welfare. To this end, we request that all parties assist the Petuanan Negeri Kobi in the struggle to regain the communal customary land controlled by circles outside this indigenous community.