The PDI-P lobbied hard to get the Pancasila Ideology Guidelines Bill passed. The DPR changed direction after the public reject it.

BEFORE a limited cabinet meeting was held at Merdeka Palace on the morning of Tuesday, June 16, Ma’ruf Amin spoke in private with President Joko Widodo. For about 20 minutes, the Vice President talked about a number of Islamic organizations which had come out against the Pancasila Ideology Guidelines (HIP) Bill. Pancasila, or the Five Principles, is the Indonesian state ideology. “It turned out that the President has the same concerns about that rejection,” said Masduki Baidlowi, a special staff member of the Vice President, when contacted on June 18.

The meeting that morning was indeed to deliberate the draft which had been approved as a bill initiated by the House of Representatives (DPR) on May 12. Present at this limited meeting were Coordinating Minister for Political, Legal and Security Affairs Mahfud Md., Minister/State Secretary Pratikno, Cabinet Secretary Pramono Anung, Minister of Justice and Human Rights Yasonna Hamonangan Laoly, and Chief of the State Intelligence Agency (BIN) Budi Gunawan.

One government official said that Budi Gunawan made a presentation about the opposition to the bill. A movement against it, said this source quoting data from BIN, has emerged in 15 provinces. The rejection occurred because the bill is accused of creating an opportunity for the communist ideology to develop. If it is not stopped, there is concern that the wave of rejection could expand.

At that time, some Islamic organizations, such as Nahdlatul Ulama and Muhammadiyah, stated their position, urging the government to cancel this bill. According to Masduki Baidlowi, the President asked Ma’ruf, who is close with Islamic groups, to appease this opposition. “The President certainly knows that Abah—a nickname for Ma’ruf—is at the center of the Islamic movement,” said Masduki.

It was decided in that meeting that the government will ask for the deliberations on the bill to be delayed. After the meeting, Mahfud said that the President has communicated with a number of circles and is studying the contents of the bill. “So the government is not sending a letter from the president for those deliberations,” said Mahfud. He asked the DPR to discuss the bill by inviting some elements of the public. Minister Yasonna Laoly said that the government will send an official letter to the DPR.

This bill has a 100-page academic paper which is divided into six chapters. The background section of that academic paper states that some events, such as symptoms of a lack of tolerance among religious communities, economic disparity, and the degradation of morals in public life, have taken place because the Pancasila has not become a guide in the conducting of state power. “The guidelines of the Pancasila ideology can be understood as guidelines for those running the government in formulating and establishing the implementation and evaluation of national development in the fields of politics, law, the economy, and social affairs,” read that paper. 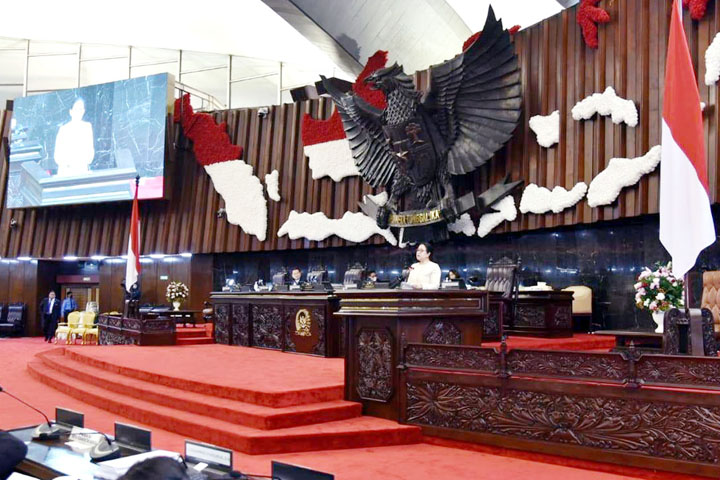 The method used to write this academic paper, as is written in the draft, came in part from the results of focus group discussions and interviews with experts and the Steering Board of the Pancasila Ideology Education Agency (BPIP). That academic paper included quoted material from 32 books and papers from various authors. Three of these were two books and a summary of a dissertation by Ahmad Basarah, deputy sepaker of the People’s Consultative Assembly (MPR) from the PDI-P. However, Basarah said that he did not take part in drafting the bill. “I was not involved in the drafting process,” he said.

Arteria Dahlan also denied the bill to have been initiated by his party. According to him, the bill was the initiative of the Legislation Body. One of the objectives of this bill, said Arteria, is to strengthen the legality of the BPIP. “All factions want the BPIP to become an institution which is regulated by law and have approved the deliberation of the bill,” said Arteria. Formed based on a presidential regulation in 2018, the BPIP is currently led by Yudian Wahyudi, with Megawati Sukarnoputri, the PDI-P general chairperson, as the chair of its steering board.

Jimly Asshiddiqie, a former chairman of the Constitutional Court (MK), who opinions were requested by the Legislation Body, also agrees with strengthening the role of the BPIP. This member of the Regional Representatives Council (DPD) considers that the BPIP can evaluate all legal products in Indonesia, for the central and regional governments, which are considered to be at odds with the values of the state ideology of the Pancasila. “After hearing my suggestions, everyone was pleased. However, as it turned out, none of my suggestions were used in the HIP Bill,” he said.

Jimly also gave these opinions at a meeting with the BPIP’s Steering Board and members at that institution’s office last February. He said that BPIP Steering Board Chairperson Megawati Sukarnoputri and the MPR Deputy Speaker from the PDI-P, Ahmad Basarah, also attended. Basarah said he gave an explanation about the Pancasila from the historical, philosophical and legal perspectives. Megawati explained the importance of strengthening and social grounding the Pancasila. “She acted in her capacity as chair of the BPIP’s Steering Board,” he said.

One BPIP official who is a high-ranking official of a party in the government coalition who is familiar with the process of writing that bill, said that the institution was involved in writing its draft. Deputy for BPIP Studies and Material Adji Samekto was reluctant to clarify the matter. “We cannot give a statement yet,” he said on June 19.

Golkar Secretary-General Lodewijk Paulus verified communication took place with the PDI-P regarding the HIP Bill. Lodewijk said that he suggested the Legislation Body give precedence to deliberating the Job Creation Bill first. “In order to secure the economy during the pandemic,” said Lodewijk.

Rieke could not be reached for comment on this matter. All last week, there was no response to messages and telephone calls from Tempo. PDI-P Chairman Ahmad Basarah said that a majority of the faction have signed the bill. “So, everything has proceeded naturally according to the procedures for making a law,” he said on June 20.

PDIP’s lobby was making progress. In a faction views meeting at the Legislation Body on April 22, the eight factions in attendance, with the Democrat Party being absent, approved the bill. However, some factions had some reservations. The United Development Party (PPP), the National Mandate Party (PAN), the Justice and Prosperity Party (PKS), for instance, asked that the bill include the Provisional People’s Consultative Assembly (MPRS) Decree No. 26/1966 regarding the disbanding of the Indonesian Communist Party (PKI) and the ban on communist teachings into the consideration section.

Achmad Baidowi, deputy chairman of the Legislation Body from the PPP Faction, said that his party does not want this bill to give any room for any ideologies other than the Pancasila, especially not for communism, to reemerge. According to him, as was agreed in the meeting, all of the reservations from the factions would be added to the draft before taking it to the plenary meeting.

“The guidelines of the Pancasila ideology can be understood as guidelines for those running the government in formulating and establishing the implementation and evaluation of national development in the fields of politics, law, the economy, and social affairs,” read that paper.

Three politicians from the Legislation Body said that a problem appeared when the Legislation Body finalized the draft on April 26. At that time, the bill did not include the MPRS Decree on the disbanding of the PKI. Four party factions which initially agreed then declined to sign, namely the PPP, PAN, PKS, and Gerindra.

Guspardi Gaus, a member of the Legislation Body Working Committee from the PAN Faction, verified this. Achmad Baidowi said some of his colleagues questioned why those meeting reservations had not been added. The PPP, according to Achmad, recently understood that this could have happened due to technical hurdles due to the meeting being held virtually during the coronavirus pandemic. “So, if it had been decided upon, it should have been accommodated,” he said.

The plenary meeting on May 12 finally approved the draft as a bill initiated by the DPR. However, after the bill was rejected by some retired military personnel and Islamic organizations, a number of DPR factions changed their tune. Finally, after the government stated its stance on delaying the bill’s deliberations, all of the factions agreed to do so.