New Face for an Old Plan


State-owned enterprises ministry reorganized the business structure of Pertamina. It was designed long in advance, after noticing the excessive bureaucracy was slowing the company down.

A closed meeting of the House of Representatives’ (DPR) Commission VI on Monday, June 22, was marked by a flurry of questions for their guest that morning, State-Owned Enterprises (SOEs) Minister Erick Thohir. During deliberations on the plan to add participating state capital in some SOEs, some DPR members, in particular from the Indonesian Democratic Party of Struggle (PDI-P) Faction, asked him to provide the road map on forming holding and subholding companies at that state-owned company.

“We, in Commission VI, have never received that road map study which was requested at the outset. So we were unable to conduct an evaluation. Suddenly these holding and subholding companies appeared,” said PDI-P Faction member Mufti Anam, explaining the question put forward in the meeting of this House commission which deals with, among other things, SOEs, on June 26.

Minister Erick said that these organizational changes were made so that Pertamina can focus more on its core business. He hopes this will brighten up the company’s performance. “Our grand plan has been consistent. All SOEs focus on core business, restructuring programs, and consolidation,” he said after the Pertamina shareholders meeting.

In the future, according to Erick, Pertamina will likely stand as a holding company which owns a number of subholding groups. For that reason, there needs to be less directors at the main office. “Our subholding companies will combine Pertamina’s many units into a single business entity.” 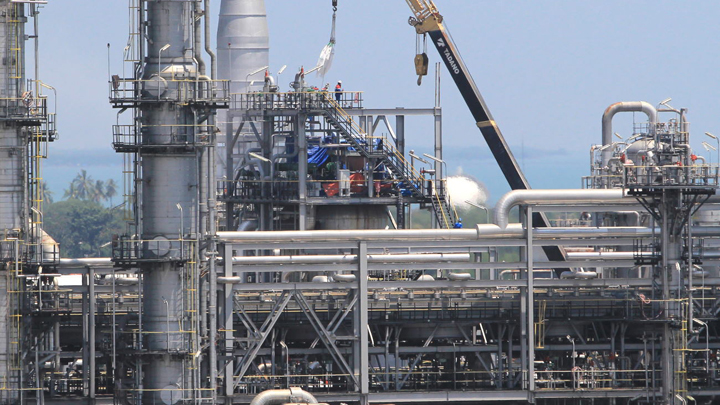 There have been numerous criticisms of this plan. In addition to highlighting the major changes to the company, news of the plan of the SOEs ministry to turn those subholding companies into public companies through initial public offerings (IPOs) has also been criticized. Old negative sentiments regarding the privatization of SOEs resurfaces.

According to Mufti, the management of SOEs differs from that of private companies. Their function is not only to seek profits and pay dividends, but also to safeguard sovereignty and improve public welfare. For that reason, he said, SOEs must have an integrated road map. “Not with statements. Not with gimmicks,” he said.

In a written statement, Pertamina Vice President of Corporate Communication Fajriyah Usman explained that, in general, the duties of Pertamina as a holding company will be directed at portfolio management and synergy in all business groups, accelerating the development of new business, and carrying out national programs.

Subholding companies will play a role on the operational side through the development of the scale and synergy of each business, accelerate business development, and increase capacities and flexibility in partnerships and financing. “This entire process of change will be done systematically through the road map which has been made through best efforts and wholeheartedly to protect the continuity of the working relationship with all Pertamina employees,” said Fajriyah.

PERTAMINA’s reorganization did not come about suddenly. The idea to streamline the oil company in the form of holding and subholding firms had been around since the time of SOEs minister Rini Soemarno. During her term as minister, PGN joined under the Pertamina flag and oversees the gas business group.

According to Fajar Harry Sampurno, who was SOEs ministry’s deputy for mining business, strategic industries and media during the era of minister Rini, the plan to form an oil and gas holding company was drawn up in the White Book on the Formation of an SOE Oil and Gas Holding Company. That book set out the basis for the issuance of Government Regulation No. 6/2018 on the addition of participating state capital in Partamina’s capital shares. This regulation was signed by President Joko Widodo on February 28, 2018.

He said that the stages of forming the holding company are explained in the white paper. The first step is to combine PGN into Pertamina, then the subsidiary of Pertamina Gas (Pertagas) are added to PGN, then comes the formation of other subholding companies in the upstream, downstream, and trading sectors. “The details are in the white book,” said Fajar, who is currently CEO of Barata Indonesia. Previously, when he was still a deputy at the Ministry of SOEs, Fajar ever said that the government had appointed Danareksa Sekuritas as a consultant to come up with the concept for an oil and gas holding company and write it up in a white book.

Another thing explained in that white book is that Pertamina will divert Pertagas to PGN through a simultaneous process after completion of diverting 56.96 percent of state-owned stock in PGN to Pertamina in the form of participating state capital. Furthermore, there are several options to combine Pertagas into PGN, namely through a merger, diverting Pertamina’s stock in Pertagas to PGN (inbreng), or by having PGN acquire Pertagas stock. The option chosen will depend on the approval of the public stockholders in PGN, who account for 43.04 percent. Later in December 2018, PGN officially became Pertamina’s gas subholding company by acquiring Pertagas for Rp20.1 trillion.

However, according to Fajar, the discussions on the planned oil and gas holding company during the era of minister Rini had not yet established any plan to hold IPOs. At that time, the SOEs ministry considered the need for IPOs could be adjusted to the future needs of companies. In principle, he added, the ownership of Pertamina as a holding company may not be released to the public.

An official at the SOEs ministry familiar with the ongoing discussions regarding the reorganization process at Pertamina said that the plan for establishing holding and subholding companies at Pertamina is part of the formation of an SOE oil and gas cluster. This official said that this concept has been around since the era of minister Rini, but did not yet include any plans for IPOs. “This (IPOs) idea came from Minister (Erick).”

Minister Erick did task Nicke with bringing the subholding companies to the stock market. This assignment was given so that the group’s key performance indicators (KPI) would be more measurable. “We are targeting that in the next two years Bu Nicke must take one or two subholding companies to go public so that the KPIs are clear,” said Erick in a video conference on June 12.

Another official in the company said that Pertamina’s directors then detailed the idea of the formation of a SOE oil and gas holding company by asking consulting firm PricewaterhouseCoopers (PwC) to conduct a study. PwC is also noted as being involved to study plans to form other holding companies, such as a SOE holding company for banking, and another one for airlines.

However, IPOs for subholding companies is not the main objective in streamlining the Pertamina Group. To date, the official said, the chain of bureaucracy in the company has been very long. As a result, strategic measures, including in investment activity, cannot be quickly decided. This official cited the problems which occurred after Pertamina took over the Mahakam Block from Total E&P Indonesie in early 2018.

The process for approving investments in old oil and gas fields has been considered too long and inefficient. Investment for drilling new wells in order to maintain production levels must begin with the general manager of the block, followed by the directors ofPertamina Hulu Energi, then goes to the general manager of investment at the head office of Pertamina, and then finally being discussed and decided by Pertamina’s directors. “The main idea is to simplify the structure at Pertamina to make it more responsive,” the official said.

For the same reason, the formation of an oil refinery and petrochemical subholding companies is deemed to be important. It is hoped that the group of businesses overseen by Kilang Pertamina Internasional can accelerate the refinery megaproject, which involves the development of four existing refineries and construction of two new ones. The total investment needed is estimated at US$65 billion or Rp910 trillion.

Minister Erick mentioned the problem of Pertamina’s oversized structure when explaining the reasons for the reorganization. According to him, there have been many Pertamina subsidiaries in the upstream oil and gas sector. As a result, the policies among those subsidiaries were often out of alignment, resulting in not achieving commercial production targets (lifting). The portfolio combining is also believed to increase the synergy and efficiency of the subsidiaries. “For instance for sharing knowledge so that lifting can be stagnant or grow. PGN and Pertagas are already there,” he said.

Kurtubi, former member of DPR’s Energy Commission from the National Democrat (NasDem) Faction, said that despite being based on a number of studies, Pertamina’s reorganization is still unusual. He considers that these fundamental changes were made too quickly. Kurtubi questions the stance of the SOEs ministry in not waiting to see what happens with the oil and gas cluster in the Job Creation Bill (omnibus law) currently being deliberated in the DPR.

According to him, there are some changes planned for the oil and gas cluster in the omnibus law. The government is proposing changing the Upstream Oil and Gas Special Regulatory Task Force (SKK Migas) become a special SOE. In this way, later there will be two state companies in the oil and gas sector, namely Pertamina as the business player and SKK Migas as the institution which represents the country in contracts with contractors working in oil and gas in Indonesia. “Just wait for the omnibus law. Let’s see how SKK Migas will affect Pertamina’s organization,” said Kurtubi, who is against this government idea.

He also questions the policy of dismantling business lines and recombining them in new subholding companies in Pertamina. A state-owned oil and gas company, according to Kurtubi, must control the business, which is integrated from upstream, processing (midstream), and downstream to create efficiency. He considers the natural monopoly of a state company is the most efficient and is allowable in the context of improving public welfare. “It is a private monopoly which is dangerous,” he said.