Up in the Air for RRI - Law - magz.tempo.co Tempo Magazine | English Edition

Up in the Air for RRI


Construction of the Indonesian International Islamic University on land formerly owned by RRI has a number of issues. Several of RRI assets have disappeared. Neither has it obtained a subsitute location. The land transfer occurred after the intervention of then Vice President, Muhammad Jusuf Kalla.

THE seven power generators have holes on every side. Square-shaped and standing some three meters tall, parts of the steel plate cover of the generators box have come off and are nowhere to be found. The machinery’s entire turbine copper coils have also disappeared. “The damages are the result of theft,” said Director of Human Resources of the Public Broadcasting Agency Radio Republik Indonesia (RRI), Nurhanuddin, on Friday, June 26.

For decades the seven generators have been kept in a warehouse in the RRI broadcasting complex in Jalan Raya Bogor, Cimanggis, Depok, West Java. The maximum output of the generators are one to two megawatts. They were there to boost up the power supply of the 15 RRI transmission towers dotted around the compound.

The old machines were left to rust and fall into further dilapidation since end of last year. Its isolated location at the southern end of the compound has made the warehouse prone to be unguarded. “There’s no more staff to guard the warehouse since ownership changed hands,” said Chief of Cimanggis RRI Transmission Section Sugeng Parwoto.

Director of RRI Technology and New Media Rahadian Gingging said the broadcasting property has been the target of theft since December 2019. In actual fact, RRI had planned to enhance its radio broadcasting signal to several regions using these transmission towers. “The Cimanggis station transmission capacity went into immediate decline when the towers were pulled down,” said Gingging. 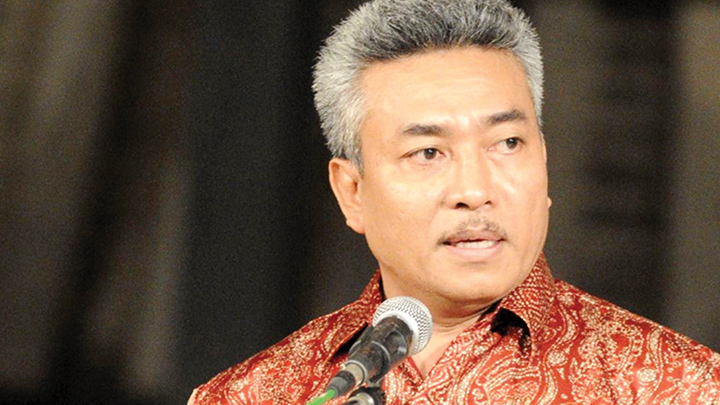 When it was officiated by President Suharto in1 984, the RRI complex in Cimanggis had 15 middle wave (MW) and short wave (SW) broadcasting stations. The MW stations broadcast local radio programs reaching to beyond the island of Java. The SW stations were for RRI’s international broadcast, Voice of Indonesia (VOI), which reached Europe and the other continents.

RRI Chief Executive Officer (CEO) Mohammad Rohanudin approved the shift in function of the 142.5 hectare plot of land for use by the Indonesian International Islamic University (UIII) on May 2017. The shift in usage gave birth to certain obligations on RRI’s part. The public broadcasting agency were compelled to move scores of generators and the broadcasting towers from the complex.

The compound has four main buildings. RRI was also compelled to quickly remove themselves from the two main buildings because UIII needs them for their rectorate offices. The other two buildings in the southern part of the compound was designated to continue being used to store RRI equipment.

Moving things obviously came with a price tag. Other costs also arose for repair and replacement of equipment parts that were damaged. RRI lost economic potential from the 15 broadcast towers that used to stand at over 100 meters each. “The towers could have been rented out to private companies transmitting signals for various electronic gadgetry,” said member of RRI Supervisory Board, Frederik Ndolu.

Losses caused by the theft of RRI assets from the complex in the last two months have reached billions of rupiah. RRI has practically lost all its cables, both from around the buildings and the ones underground. The burglars had ample leeway to dig up the trenches housing the underground cables because no guards were around.

A patrol team once caught some thieves taking cables and steel items from the RRI warehouse in March. The perpetrators lived in the vicinity of the compound. The goods they were stealing are assessed to be worth some Rp300 million. The three thieves are being tried in the Depok District Court. “They had repeatedly stolen goods from the RRI warehouse,” said Nurhanuddin. 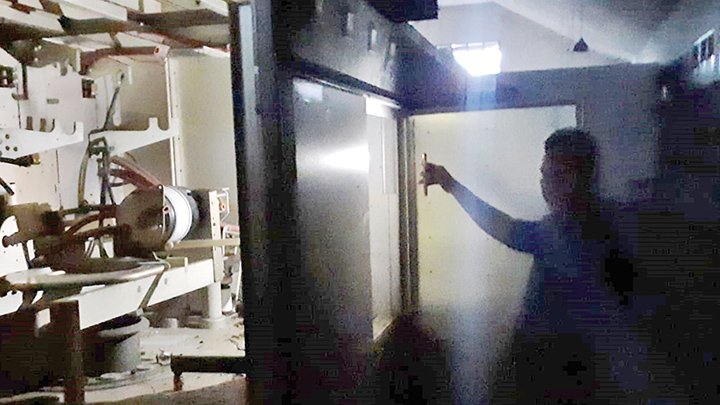 Parts of the broadcasting machine in the medium wave operational building that were stolen, in Cimanggis, Depok, West Java, June 22./TEMPO/Riky Ferdianto

These series of losses pushed Frederik Ndolu to write to RRI CEO Mohammad Rohanudin. He stated that Rohanudin should have calculated the economic implications after the land function transfer in Cimanggis. Besides suffering material losses from the stolen assets, RRI has also lost its capability to broadcast the VOI through the analogue SW. “The board of directors should have demanded the government provides an immediate substitute location,” said the former VOI broadcaster from the 1990s.

To date, the matter of obtaining a substitute land is still up in the air. The religious affairs ministry, which is responsible for the UIII has not provided a replacement spot.

Instigated by an idea from the vice president for the 2014-2019 period, Jusuf Kalla, the government decided to establish the UIII. On June 5, 2018, President Joko Widodo laid the cornerstone for the campus construction. Kalla said he suggested the establishment of the UIII because he felt Indonesia needed to have an Islamic campus of international standards. He selected the Cimanggis plot because the state-owned land was deemed most strategic. “All this while neither had the plot been made functional,” said Kalla.

A meeting at the office of the Presidential Advisory Council in Jalan Veteran III, Central Jakarta, in early 2017 was conducted in a blunt manner. The RRI board of directors who attended the meeting were the target of ire from several ministers. “We were reprimanded because we were considered of not being able to understand of inter-institute etiquette,” said Mohammad Rohanudin on June 26.

The meeting was a further step on the government’s side to convince RRI to hand over the use of the 142.5 hectare plot in Cimanggis to the religious affairs ministry. The then communication and informatics minister, Rudiantara, also attended the meeting. The government was blatantly eyeing the RRI land to build the UIII. The RRI board of directors had no wish to comply to the asset shift since being sworn in on July 2016.

RRI was adamant about holding on to their asset because the government had made no steps in securing a replacement location. Said Rohanudin, RRI took its time about agreeing to the swap in function because a number of its broadcasting towers were still in full function in Cimanggis. “In principle we were not against the idea of the swap, because the land was state-owned,” he said.

Rudiantara held three meetings to convince the RRI directors. One of the meetings was conducted in a hotel in Tanah Abang, Central Jakarta. Rudiantara had prepared a draft agreement for the land swap in every meeting.

The communication and informatics ministry, said Rudiantara, was involved because RRI once came under its jurisdiction when it was still called the communication department. Structurally, the communication ministry held a mandate as warden of RRI employment. “The government wanted the land, but still wished to look out for the needs of RRI,” he said.

The government found the RRI land in Cimanggis attractive because of its ample breadth. It also had proximity to Jakarta and had an access route. The RRI complex was only some 200 meters from the gates of the Cinere-Jagorawi toll road in Jalan Raya Bogor.

The government also deemed RRI was not optimal in making use of the plot because broadcasting had mostly abandoned SW technology. It noted radio broadcasting had long shifted from analogue to digital. Rudiantara repeatedly offered to revitalize RRI’s broadcasting technology during every meeting. The directors were steadfast in their refusal.

The deadlock in negotiations made Jusuf Kalla take action. He invited the RRI directors to his private abode in Jalan Brawijaya Raya, South Jakarta in early 2017. In the meeting, Kalla promised a budget of Rp300 billion to revitalize RRI technology. “All the RRI technology in Cimanggis are 70 years old. Many were in disrepair,” Kalla told Tempo.

The government promised to look for a replacement location. But Kalla suggested RRI focus on developing a digital broadcasting platform. According to Kalla, radio listeners the world over had long abandoned analogue sets. “It would be stupid to maintain that analogue broadcasting was still important to hold on to,” he said.

The religious affairs ministry wished to immediately announce a tender upon receiving the blessings of RRI, It then requested RRI to vacate the premises immediately. According to the Chief of General Affairs of the Religious Affairs Ministry, Syafrizal, responsibility for vacating the premises fell to RRI because they were deemed more knowledgeable about dismantling and removing the broadcast towers.

Syafrizal said RRI stored the steel from the transmission towers in the warehouses in early 2019. All the metal was stored in 15 21-foot long containers piled up on the Cimanggis land. Tempo observed the metal boxes had begun to rust badly. 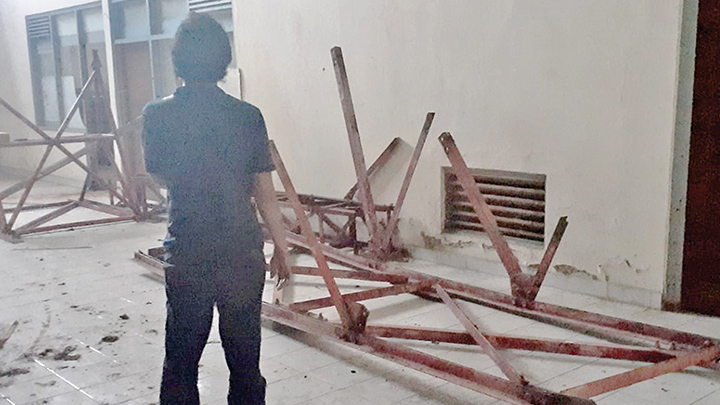 Removal of the containers await a decision by RRI board of directors and the directorate-general of state wealth of the finance ministry as the managers of state assets. “There are still many aspects to be discussed, in order for the project to not disadvantage any single party,” said Syafrizal.

Director of State Asset Management and Information Systems, Purnama T. Sianturi, verified the request for a location replacement for RRI. He said, the government has offered several options, including the ones in Cipayung and Citayam, Depok; and in Cibinong, Bogor. “But RRI responded by saying the plots are unsuitable,” he said

CEO Mohammad Rohanudin said RRI refused one of the plots in question because it is still entangled in a dispute. Another plot offered is in Balaraja, Tangerang, Banten. Said Rohanudin, a transmission tower is only good when constructed in an area with a lake. “Availability of water is of utmost importance to cool down transmission towers and power generators,” said Rohanudin.

RRI proposed an alternative option. They have requested a 4.7 hectare plot south of the RRI complex. The location is in the vicinity of the Rumah Cimanggis, a conservation site with an old Dutch building declared a heritage site by the Depok administration. “The location would be ideal to establish a tower using new technology,” said Rohanudin. 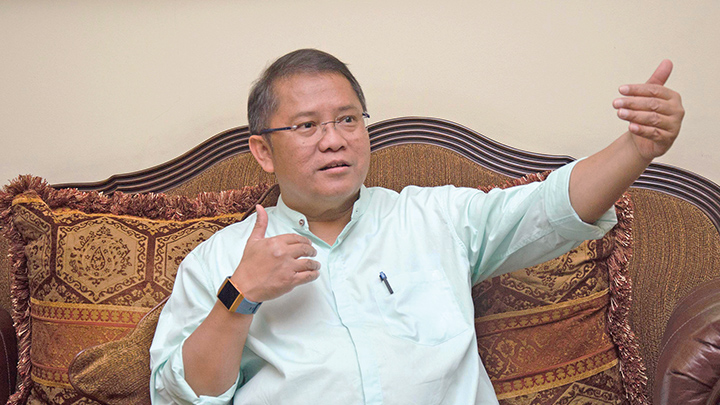 Even if they get a replacement soon, RRI still potentially is sustaining many losses. Despite the original land being state-owned, under the whole deal, RRI has lost an alarming number of assets, not to mention potential economic benefits they enjoyed from their analogue international broadcast. Moreover, the finance ministry has withdrawn the promised Rp300 billion budget because it has been rechannelled for handling of the Covid-19 pandemic.

Deputy Chief of the Finance and Development Supervisory Agency’s (BPKP) Internal Government Monitoring Section for Political, Legal and Security Matters, Iwan Taufiq Purwanto, said they are still scrutinizing the process of the UIII campus construction. The BPKP cannot assess the material losses sustained by RRI during the swap. “Asset calculation and its bookkeeping are not under our jurisdiction,” he said.

Member of the Supreme Audit Board (BPK), Achsanul Qosasi, assessed RRI sustained losses because of the incomprehensibility in the process of the land swap. The change-over of land ownership also resulted in the loss of analogue broadcasting equipment. Despite this, the BPK is still scrutinizing whether state losses are incurred. “But for sure, RRI’s bookkeeping was turned into shambles,” he said. “and their assets have decreased.”