Indonesia is taking two ways to get the Covid-19 vaccine. Bio Farma and Kalbe Farma are collaborating with vaccine makers from China and South Korea. The Eijkman Institute for Molecular Biology is leading an independent vaccine development.

KUSNANDI Rusmil, 70, is busy with a new activity. The professor of pediatrics at Padjadjaran University’s Faculty of Medicine and pediatricians at Bandung Hasan Sadikin Hospital in West Java heads a team of clinical trials for the CoronaVac vaccine by Sinovac Biotech Ltd from China, which collaborates with Bio Farma. Kusnandi has been involved in 30 clinical vaccine trials, but for the 2019 Coronavirus Disease (Covid-19) vaccine, the tests have been extraordinary. “We are racing against time. Normally, the fastest for optimum results is nine months,” he said on Wednesday, June 17.

Kusnandi said he is quite a regular at testing vaccines produced by Bio Farma—including the injected inactivated polio vaccine, which works similarly with the CoronaVac as it is in the form of a virus that is deactivated. He said that it usually takes eight years to develop a vaccine from the beginning to the end. “Some even takes 13 years,” he said. The CoronaVac was first developed by Chinese scientists in late January.

The CoronaVac successfully passed the first and second phases of clinical trial in China. During the phase II clinical trial involving 600 volunteers, the vaccine was claimed to have succeeded in creating neutralizing antibodies in more than 90 percent of the volunteers. “Our first and second phases of study showed that the CoronaVac is safe and can produce an immune response,” Sinovac Chief Executive Officer (CEO) Weidong Yin said in a press statement. CoronaVac has got the green light for a third phase of clinical trial in China, in Brazil by Instituto Butantan, and in Bandung by Bio Farma.

Kusnandi is targeting to have 1,640 volunteers for the clinical trial. The volunteers must be over 18 years and pass the medical examination. They must be free of symptoms of cough and cold and have had no direct contact with Covid-19 patients in the last two weeks before immunization.  “The plan is for the clinical trials to begin in mid or late July, depending on Bio Farma’s readiness,” said Kusnandi, who recruited a dozen specialists and 30 general practitioners to monitor the condition of volunteers.

Three days after getting injected with the first dose, the volunteers will undergo check-ups. Another examination will take place seven days later, and a follow-up medical examination 28 days after that—followed with the second dose’s injection. “I don’t want to fail. It has to be done with the best quality so that the time, energy and funding do not go to waste,” he remarked. To prevent volunteers from changing their minds and quitting midway, Kusnandi involoved his relatives and acquaintances—such as hospital staff, faculty members and university staff—including family members in this trial.

Iwan Setiawan, head of corporate communications department at Bio Farma, said the company collaborates with the Padjadjaran University’s Faculty of Medicine as the center for clinical trials. The university’s Microbiology Laboratory will conduct a polymerase chain reaction (PCR) test if there are volunteers infected with Covid-19 after the immunization. “The health ministry’s research and development department acts as the tester for neutralization of blood samples of the clinical trial subjects,” he said.

According to Iwan, the CoronaVac will be produced and allocated for the Indonesian market. Only when there is an oversupply, the products will be exported to Southeast Asian neighbors. “Bio Farma plans to produce about 100-250 million doses of Covid-19 vaccine per year,” Iwan wrote to Tempo on Wednesday, June 24. “The target is to produce it by the first quarter of 2021, provided that the third phase of clinical trials, the audit by the Food and Drug Monitoring Agency (BPOM), and the vaccine distribution permit all went well,” he said.

In addition to working with Sinovac, Bio Farma also works with the Coalition for Epidemic Preparedness Innovations (CEPI). According to Neni Nurainy, Bio Farma’s project integration manager, research and development division, just like Sinovac, Bio Farma will get bulk vaccines from CEPI. Bulk vaccine is the active pharmaceutical ingredient of a vaccine. “We will put the bulk vaccine into vials, handling the packaging, as well as quality control of the final product,” said Neni replying to Tempo’s e-mail on July 2. 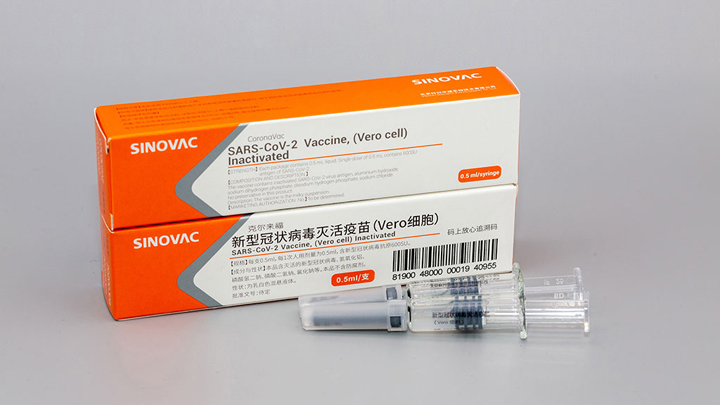 CEPI is an international alliance for developing new vaccines based in Oslo, Norway. It was founded by the governments of Norway and India, the Bill & Melinda Gates Foundation, the Wellcome Trust, and the World Economic Forum in Davos, Switzerland, in 2017. Currently, CEPI has financial support from Bill & Melinda Gates, Wellcome Trust, European Commission, and the governments of Australia, Belgium, Canada, Denmark, Ethiopia, Germany, Japan, Mexico, Norway and the United Kingdom.

So far, CEPI is funding five partners of Covid-19 vaccine development that have entered the clinical trial stage, namely: Moderna Inc., Novavax Inc., University of Oxford-AstraZeneca, Inovio Inc., and Clover Biopharmaceuticals. According to Neni, Bio Farma and CEPI are in the stage of choosing the right platform that matches Bio Farma’s capacity. “We are still exploring vaccine candidates from CEPI partners that will be selected for mass production,” she said.

According to Neni, Indonesia has a high bargaining position to obtain vaccines from manufacturers abroad. “Indonesia plays an important role in protecting the world against infectious diseases because the population is fourth largest in the world,” he said. “Indonesia also has Bio Farma as a vaccine producer that meets WHO qualifications and is the only vaccine producer in Southeast Asia,” Neni added.

The state-owned enterprise is not the only one seeking Covid-19 antidotes. Private pharmaceutical company Kalbe Farma, which has formed a subsidiary named Kalbe Genexine Biologic, is also doing it. The subsidiary is engaged in the research and development of biological products with South Korean firm Genexine Inc. since 2016. According to the Kalbe Farma CEO Vidjongtius, Genexine invited the company to become a collaborative partner for the GX-19 vaccine.

According to Vidjongtius, the GX-19 is currently undergoing phase one of clinical trials in South Korea. At the same time, Kalbe coordinates with the health ministry, research and technology ministry, BPOM, numerous national research institutions, as well as medical professionals and academics to prepare for phase two’s protocols in Indonesia as the second trial center. “We hope that phase two of the clinical trials can begin in the fourth quarter of 2020,” Vidjongtius said by e-mail on July 3.

Minister of Research and Technology/Head of the National Research and Innovation Agency, Bambang Brodjonegoro, said that Indonesia is taking a two-track approach in the search for Covid-19 vaccine. “The first track is developing its own vaccine led by the Eijkman Institute,” Bambang said in a video conference, July 1. “The second track is cooperation with foreign parties, because we see this vaccine a solution that helps economic recovery as well.”

Minister Bambang said the second track is taken simultaneously by Bio Farma and Kalbe Farma. “We don’t want to depend on one source only. The fastest one, we will produce. The important thing is that the Red and White (Indonesian) vaccine gets a place,” he said. The minister also said that the Indonesian-made vaccine receives funding from the Research and Innovation Consortium for the Acceleration of Covid-19 Mitigation, sourced from the finance ministry’s endowment fund for education (LPDP).

Amin Soebandrio, head of the Eijkman Molecular Biology Institute, confirmed news that his agency is leading the vaccine development independently with an innovative productive research fund of Rp5.2 billion for the first year. “Yes, Rp5.2 billion is the minimum fund. Ideally, Rp10 billion is needed because the materials and animal testing are expensive. It takes 10-20 monkeys, which costs Rp100 million per monkey,” he said.

Amin said that the virus development has reached 20 percent progress. To use buildings as an analogy, he said, 20 percent represents the foundation of the entire building. The completed phase is the sequencing the viral genome in Indonesia. “The Eijkman Institute already has 10 viruses with all of their genomes sorted. The target is 100 viruses,” he said.

From the sequencing, Amin said, they discovered parts of the virus that infect cells, namely protein S (spike) and protein N (nucleocapsid). “Two weeks ago, we succeeded in amplifying the S protein gene. The N protein gene a month ago,” he said. “The next step is to clone the genes that encode the S and N proteins by inserting them into the mammalian Chinese hamster ovary (CHO) cells.” The resulting antigen is then purified as a vaccine candidate of the recombinant protein type.

Amin estimated that the vaccine candidate they made could be submitted to Bio Farma in February or March 2021, so that it could be clinically tested to humans. “To conduct clinical trials means that the vaccine must be made first. The one that can make the vaccine is the pharmaceutical industry, which has guidelines on how to make good medicines,” said the clinical microbiology professor from the University of Indonesia.

Dirga refers to the history of vaccines development in the world, which requires an average of 10-15 years. “There is one vaccine that was developed relatively quickly, which was the mumps vaccine, taking only three to four years,” he said. Dirga also reminded that the success rate of vaccine development so far is 10 percent. Meaning, he said, if there were 100 vaccine candidates, there would only be 10 that are truly effective.

The time required to develop a vaccine from scratch, Dirga said, highly depends on the capacity of the laboratory and factory, and the results of each stage. He said that it takes three to six months for the preparation of antigens. Clinical trials normally take two to three years, but can be shortened to nine to 12 months. “If the vaccine is safe and effective, it can be mass-produced, which takes another one to two years. The realistic prediction for a self-made vaccine is to be produced in early 2022, “he said.

Neither Iwan Setiawan nor Vidjongtius could give an estimated price for a dose of Covid-19 vaccine they would later produce. One thing for sure, Iwan said, is that the price will not burden the people. Vidjongtius asserted that the vaccine must be affordable to as many people as possible. Meanwhile, Dirga predicts that the price of Covid-19 vaccine from producers will reach US$10 per dose. “This is very expensive and must be lowered, because the ideal price is US$1,” Dirga said.