Some relatives of high-ranking political party officials will run in the regional head elections this coming December 9. It is considered a warmup before the 2024 General Election.

SRI Untari, together with the officials of the Indonesian Democratic Party of Struggle (PDI-P) of the Kediri Regency, East Java, went to see Cabinet Secretary Pramono Anung and his son, Hanindhito Himawan Pramana, in Jakarta early this year. Their visit was to ask Hanindhito (Dhito) to become a candidate for regent of Kediri. Sri Untari, who is secretary of East Java PDI-P, said that Pramono and Dhito did not immediately agree to their request.

Because no answer was given, East Java PDI-P Chairman Kusnadi invited Dhito to visit the home of General Chairperson Megawati Sukarnoputri in Jalan Teuku Umar, Central Jakarta, in mid-March. It was only after this meeting, according to Sri Untari, that Dhito was willing to be nominated. “We waited for his answer for quite a long time,” Sri Untari told Tempo on Friday, July 10.

In Kediri, the PDI-P has been in power for the past 20 years. This began in 1999, when one of its cadres, Sutrisno, became regent there. He served two terms, ending in 2009. After that, he became chairman of Kediri PDI-P and nominated his wife, Haryanti, as a candidate for regent. He also put his other wife, Nurlaila, as a challenger. Haryanti won and became regent of Kediri from 2010-2015. 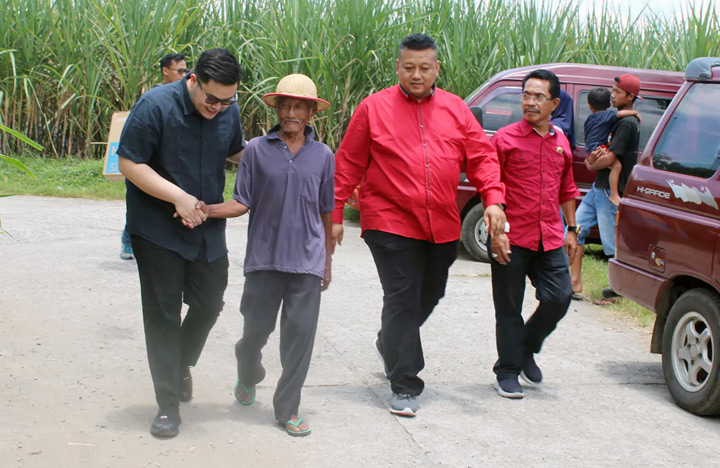 In the simultaneous regional head elections in 2016, incumbent Haryanti ran for a second term. This time she was competing against Sutrisno’s third wife, Sayekti. Once again, Haryanti was elected and is serving a second term until 2021. In preparation to name a candidate for regent, Sutrisno resigned as Kediri PDI-P chairman in December 2019. Central party officials appointed Ngawi Regent Budi Sulistyono as the acting chairman.

In the Regional Legislative Council (DPRD) of Kediri, the PDI-P controls 15 of the total 50 seats. In second place is the National Awakening Party (PKB) with nine seats, then Golkar with six seats, the National Mandate Party (PAN) with five seats, Gerindra with five seats, National Democrat (NasDem) Party with four seats, the Democrat Party with three seats, the United Development Party (PPP) with two seats, and the Justice and Prosperity Party (PKS) with one seat. The PDI-P is the only party which can field a candidate for regent without having to form a coalition with any other parties.

A high-ranking PDI-P official said that their party wants to end Sutrisno’s political dynasty in Kediri. That is why they have prepared an alternative candidate, namely Pramono Anung’s son, who is from Kediri. Secretary of East Java PDI-P Sri Untari did not explicitly explain the reason for ending the political dynasty in Kediri. However, that member of the East Java DPRD explained that their party does not only want to win in Kediri. “We also want there to be internal party regeneration,” said Sri Untari.

THE simultaneous regional head elections are planned to be held on December 9. This consists of elections for nine governors, 224 regents, and 37 mayors.

Pramono Anung said that his son never registered to run as a candidate for regent. However, according to him, East Java and Kediri PDI-P officials came to his home in Jakarta. They asked Dhito to be willing to run. Because this was a party assignment, said Pramono, his son could not turn them down. “This happened suddenly. The Javanese say, ketiban sampur (there was an unexpected responsibility), and an assignment was given,” said Pramono.

Met by Tempo at the office of the PDI-P in Kediri on July 11, Dhito said that he immediately went to work once his name was registered as a candidate for regent. Over the past three months he has met with many public figures and circles, such as the Village Forest Community Institution, the Indonesian Islamic Propagation Institution (LDII), and the Muhammadiyah organization—the second biggest Islamic organization in Indonesia. He also established communication with other parties, such as NasDem, Golkar, Gerindra, PAN, and the Democrat Party. “Before coming here I met with 19 village heads in the Mojo subdistrict. Not long ago I met with an association of village heads,” said Dhito.

THE simultaneous regional head elections are planned to be held on December 9. This consists of elections for nine governors, 224 regents, and 37 mayors. Some candidates for regional head positions come from circles of power. This includes the eldest son of President Joko Widodo, Gibran Rakabuming Raka, who is competing for the mayoral seat in Solo, Central Java. Even though he is endorsed by the PDI-P, his nomination has not been officially announced by the party.

Jokowi’s son-in-law, Muhammad Bobby Afif Nasution, will likely run for mayor of Medan in North Sumatra. Bobby has met Golkar General Chairman Airlangga Hartarto and Gerindra General Chairman Prabowo Subianto to be put on the ticket. Some PDI-P officials said that their party will likely support Bobby. The PDI-P has 10 seats in the Medan DPRD and can field their own candidate for mayor without having to form a coalition with other political parties.

Other relatives of top party officials are also competing in the regional elections. In the city of South Tangerang, Banten, the Gerindra has nominated Rahayu Saraswati Djojohadikusumo as a candidate for deputy mayor. Rahayu, who is better known as Sara, is a niece of Prabowo Subianto. In the party structure, Sara is chairperson of women’s advocacy division. She was a member of the House of Representatives (DPR) for the 2014-2019 term, but failed to be reelected in the 2019 General Election. 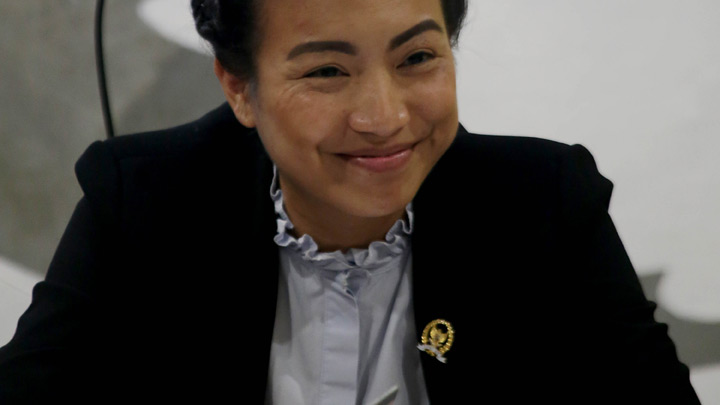 Gerindra Deputy General Chairman Sufmi Dasco Ahmad said that party officials in Banten and South Tangerang have nominated Sara to be a candidate for deputy mayor. On June 30, the PDI-P recommended Sara as a candidate to run for office with Muhammad, regional secretary of South Tangerang. This written recommendation was signed by general election campaign chairman Bambang Wuryanto and PDI-P Secretary-General Hasto Kristiyanto.

A high-ranking PDI-P official said that this letter was made through a high-level lobby between officials of both parties. Bambang Wuryanto verified the news that his party is going to support Muhammad and Sara in South Tangerang. However, Bambang did not give a clear reason regarding why this is being done. “There is no need to ask about that. It was certainly done with much political consideration.”

South Tangerang is also a political battleground for Siti Nur Azizah, the daughter of Vice President Ma’ruf Amin. Siti used multiple approaches to secure her name on the nomination ticket. She took part in the convention of the Indonesian Solidarity Party (PSI), which has four seats in the South Tangerang DPRD. However, at the end the PSI chose Muhammad, who also took part in that party’s convention. Siti also registered with the PDI-P and PPP. She also filled out nomination forms with the PKB and PAN.

Siti is currently deputy secretary-general of the Democrat Party, which has five seats in the South Tangerang DPRD. She is also supported by the PKS, which has eight seats. Budi Prayogo, PKS chairman for regional head election campaigns in West Java and Banten said that their party supports Siti as a candidate for mayor. “We have had rather intense communication with friends in the Democrat Party,” he said.

The PKB is also considering of supporting Siti. PKB Chairman Ahmad Iman Syukri said that one reason for this is closeness in the community of the Nahdlatul Ulama (NU—biggest Islamic organization in Indonesia). Siti’s father, Ma’ruf Amin, is one of the party’s founders and also a figure in the NU. Iman said that there has been communication between Ma’ruf and PKB General Chairman Muhaimin Iskandar regarding Siti’s nomination. “I don’t really know the details of it,” said Iman.

Siti was reluctant to explain her nomination process. “Please pray for me,” she said to Devy Ernis from Tempo. Siti had previously said that Ma’ruf gave his blessing for her nomination to run for office in South Tangerang.

FOR the past two weeks the general chairs of political parties have been meeting intensively, in preparation for the simultaneous regional head elections. On June 25, Democrat Party General Chairman Agus Harimurti Yudhoyono met with Golkar Party General Chairman Airlangga Hartarto. One item on the agenda for this meeting was to explore the possibility of a coalition for regional head elections. Airlangga said that Golkar and the Democrat have agreed to run together in 33 elections. “There is potential to do so in 31 other locations,” said Airlangga. 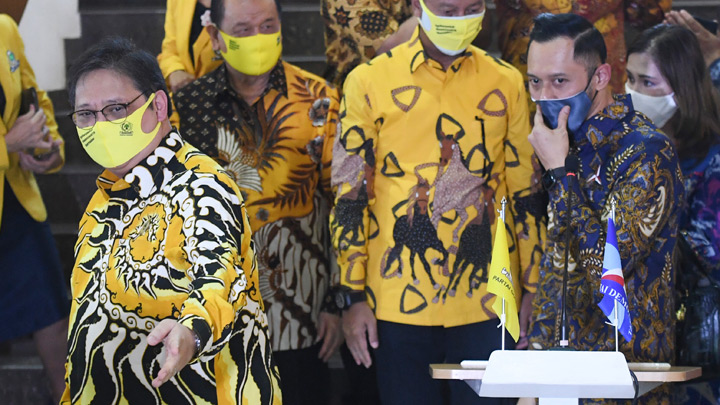 After meeting Agus Harimurti, Airlangga met with Prabowo at the latter’s home at Jalan Kertanegara in South Jakarta, on July 6. In this meeting, Golkar invited Gerindra to join a coalition in several regions, including for the election of the governor of North Sulawesi. In that region, it is confirmed that the PDI-P will again nominate Olly Dondokambey, the incumbent.

Agus Harimurti also met PKB General Chairman Muhaimin Iskandar on July 8. After meeting Agus Harimurti, Muhaimin met with PSI General Chairperson Grace Natalie. In the meeting with Agus, Muhaimin said that the two parties have agreed to form a coalition in 33 regions. They are still looking into further election cooperation. Regarding the meeting with the PSI, the PKB said that it will likely form a coalition in the election for governor of West Sumatra. “The technical details will be discussed by the regional election desks of respective parties,” said PKB Chairman Ahmad Iman Syukri.

In addition to being an entry point for the relatives of high-ranking political elites, the upcoming regional heads elections are a preview for the 2024 election of members of the legislature. Democrat Party General Election Campaign Chairman Andi Arief said that the regional heads elections play a strategic role in consolidating party strength. While the PKB, Iman said, always sets some conditions for candidates who are not party cadres. For example, such candidates must involve people from the party’s organizational structure in the campaign team. “The party’s engines must be warmed up,” said Iman.