A Mid government’s efforts to speed up digitalization of broadcasting, the House of Representatives (DPR) decided to drop the broadcast law revision from its 2020 national legislative priorities.

Johnny, 63, said that the growing disruptive technology trends have made the switch to the digital broadcasting—also known as the analog switch off—even more pressing. Millions of people who bought digital televisions will continue to be disadvantaged if the digital transformation is not expedited. At the same time, the television broadcast industry also stands to lose the market to digital broadcasting companies which offer online options. Johnny hopes that the national broadcast digitalization would have a legal umbrella to ensure its implementation.

Johnny received Tempo’s Mahardika Satria Hadi in his office for the interview. The National Democrat (NasDem) politician talked about various matters, from the user data leak, government’s strategy to combat hoaxes, Internet blackout in Papua and West Papua, to the importance of the law on data protection and privacy. He also discussed his meeting with the European Union delegation to Indonesia some time ago.

Indonesia is falling far behind others including several Association of Southeast Asian Nations (ASEAN) countries in digitalizing broadcasting. How do we tackle this?

Who are these parties?

Industrialists, businessmen, whoever resisting the initiative.

Is the resistance quite strong?

What are the benefits of digitalized broadcast?

It should facilitate coexistence among providers within the broadcast industry. We are facing the influx of so-called over-the-top providers that offer a myriad of options via the Internet. In terms of television, there is also increasing demand from the public to switch. Millions of people have bought smart TVs but they cannot fully enjoy the perks because there is no digitalized TV broadcast. Isn’t it a shame? We should not think about the industry or the companies only. 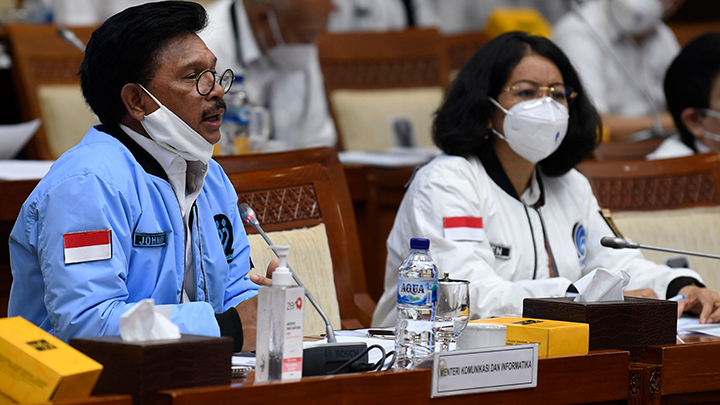 Digital transmission largely depends on the Internet speed. How is the Internet penetration rate in Indonesia?

It’s quite high with around 175 million people or 64 percent of the total population having access to the Internet.

During the social restriction measures, many students in the regions cannot follow online lessons due to the lack of Internet access.

We need to enhance the telecommunication infrastructure. Don’t talk about the Internet access without the telecommunication infrastructure development. Metaphorically speaking, you are building a huge dam without irrigation canals to the fields. The fields don’t get the water. The same goes for the Internet. You build the broadband Internet without networks in the middle and at the downstream. Well, of course there will be no access in these areas. There will be no Internet without 4G networks.

Has the public access to the Internet been evenly distributed?

The number of internet users has nothing to do with the regional and administrative coverage. For instance, there are millions of Internet users in Java and one person has more than one mobile phone. The coverage however can be expanded to villages only through building networks in the middle until the last miles. Otherwise, access will be limited to places where there are networks.

Data leaks which affect millions of internet users, from e-commerce customers to Covid-19 patients, still occur. Why do these incidents recur?

What kind of data leak? Don’t get carried away by a single interpretation of the term data leak and create panic. Data breaches and leaks happen everywhere. Even the US defense ministry experienced data breaches. Indonesia was recently rattled by news of data leaks in e-commerce platforms such as Tokopedia, Bhinneka, Bukalapak and so on. The General Election Commission (KPU)’s data, and most recently Covid data were also reported to have leaked.

What did the ministry’s investigation find?

There were indeed leaks in some platforms, Tokopedia among others, but they did not involve sensitive data because their security system was unbreachable. That was what Tokopedia informed us. Sensitive data such as bank, credit card, invoice information were not breached. A thorough evaluation into the data security system is being done.

How about the leak of data belonging to 200 million registered voters at the KPU?

The KPU said that its server was not hacked. If it occured at polling stations, the data such as voters’ names and population identification numbers are public information anyway. In accordance with the data law, these data had to be released for election needs. In essence, the data leak did not occur at the KPU.

What actually happened in the case of Covid-19 patient data leak?

Interoperability of Covid data is managed by the ministry. We checked and found no data leak or breach. The data center has not been tampered with. We cleaned the data before forwarding them to the health ministry’s dashboard where they were cleaned again by the National Cyber and Encryption Agency (BSSN) before announcing them to the public. The BSSN also said there was no leak at the data center.

Where did it occur then?

It could have been in one of the regions as the data come in from various regions across the country, but these data were not yet processed for interoperability. In other words, they are still raw data.

Hoaxes are also still rampant across social media platforms. What has the ministry done to combat the spread of hoaxes?

What is the solution?

We asked the platform providers to take down (the content). They can erase (the content) through their systems. One of the ways is to consult with their local partners.

What are the considerations behind the government’s withdrawal of its appeal against the State Administrative Court’s ruling on the Internet blackout in Papua and West Papua during the unrest in August 2019?

We filed an appeal because there is a strong legal basis to appeal, but President Joko Widodo has other considerations. He respects the court’s verdict. The government pays close attention to the growing democracy in the country, freedom of opinion and freedom of press. After taking all that into consideration, we decided not to pursue the appeal. Well, yes, we withdrew our appeal.

Did the President directly inform his considerations to you?

You don’t have to know everything. This is the government decision and it was conveyed through the state attorneys. There are regulations, right? You can’t simply withdraw an appeal. It needed time as we needed to fulfil the requirements.

In its ruling, the State Administrative Court says that the government violated the law when it blocked the Internet access in Papua and West Papua.

We appealed the violation part, right? As the information minister, I refuse to be called out for being wrong. Where was I wrong? That’s why I used my right to appeal. Then, on President’s considerations, the appeal was withdrawn. I have to respect that. It was a political choice, a decision between maintaining and respecting the verdict and executing it. Both have pluses and minuses. We decided not to continue and that’s what we did.

Why did the President choose not to proceed to get the final and binding ruling?

You will also object if he continues.

The government has been accused of not respecting freedom of opinion for arresting critics of the President.

These are only allegations. The question is: was it Pak Jokowi who ordered the arrest? He in fact told us to respect democracy, freedom of press and freedom of opinion. It is Pak Jokowi’s commitment. A legal institution took legal steps and some citizens used their right to report it, then why must (the complaint) be addressed to Pak Jokowi? Did he ask the police to arrest them?

The DPR is currently deliberating the personal data protection bill. To what extent can the law protect Internet user data in Indonesia?

Data usage must always refer to user’s consent. Providers are not allowed to use the data without the owner’s consent. Data users have tons of rights for both general and specific data, including the right to update, revise, improve, complete, reduce and erase data. They have the right to be ‘forgotten’ or to have their personal data deleted. If a court rules that a user is guilty but later finds that he or she is not guilty, the data on the case must be erased.

» Board Member, National Democrat Party (since 2013)

How about the regulations regarding data users?

Users also need correct, updated and verified information. The management of data movement within the country is already good, but the cross-border data movement must be regulated at the regional, global, bilateral and multilateral levels.

Who should be regulated?

Data processors and controllers. Their jobs and authorities must be regulated. There are those which handle both data processing and control. They are either individuals, legal entities or institutions. Everything is regulated in the 15 chapters and 72 articles of the personal data protection bill. This is government’s initiative. I used the European Union’s General Data Protection Regulation (GDPR) as a benchmark. The draft that we submitted to the DPR is almost identical to the GDPR.

How does Indonesia fare when it comes to personal data protection?

Indonesia is one of the countries lagging behind on two legislations. The first is the legislation relating to digital broadcasting which is already included in the omnibus law. The second is the personal data protection draft law. Around 130 countries, including five or six ASEAN nations, already have them.