Shell plans to let go of its stake in the Masela Block giant liquid natural gas project, likely because of the project’s change of scheme and the latest economic predictions.

EXPLANATION from Dwi Soetjipto, chief of the Upstream Oil and Gas Special Regulatory Task Force (SKK Migas) bothered the host at a closed meeting on Wednesday, July 15. That afternoon, to the Oil and Gas Working Committee (Panja Migas) of House of Representatives’ (DPR) Energy Commission, Dwi said that the Masela Block partnership is one of the three main challenges faced in this giant liquid natural gas (LNG) project.

Dwi could only ascertain that Inpex Masela Ltd, as operator, is still committed to develop the Abadi Field in the Masela Block. Meanwhile its partner, Shell Upstream Overseas Services Ltd, is re-evaluating its global investment portfolio. “Partners continue to fully support the project in the Masela working region for the 2020 program, and are reviewing their 2021 working program,” Dwi said in his explanation.

The partnership program mentioned by the SKK Migas seemed to confirm information that Shell plans to leave Masela. The rumor, which started circulating since early July, was the premise of organizing the meeting  that Wednesday afternoon.

Dwi unavoidably became the target of the Commission’s questionings. “Will this change planning?” asked Kardaya Warnika, Panja Migas member from the Gerindra Party Faction. To Tempo, Kardaya, former chairman of the dismissed upstream oil and gas regulator BP Migas—now SKK Migas—explained on July 21 that Shell’s signal to retreat from the Masela Block leaves the development of this project in the Arafura Sea in doubt.

Sartono, Panja Migas member from the Democrat Party Faction, asked the SKK Migas and the energy and mineral resources ministry to take this problem up higher: to the president. “What is this? Why is this suddenly happening?” Sartono questioned. “This needs to be discussed government to government.”

In its explanation, the SKK Migas reasoned that Shell is in the midst of re-evaluating its global investment portfolio. However, Eddy Soeparno, Panja Migas member from the National Mandate Party (PAN) Faction, suspects that Shell’s plans to leave Masela is related to the change in the LNG development concept from offshore to onshore. This shift in scheme has markedly increased investment costs from the initial US$15 billion to US$19.8 billion, or some Rp280 trillion.

Shell has a history of leaving giant LNG projects deemed no longer economically beneficial, some of them caused by a change of development concept. Last year, for example, this multinational energy company stepped out of an LNG project in the Baltic Seas, headed by Russia’s Gazprom, for the same reason.

A Tempo source who was present at the meeting revealed that Li Ping spoke about the policies of Royal Dutch Shell, the parent company, which is re-evaluating its investment portfolios worldwide. Among the projects being scrutinized is Shell’s participation in Masela’s Abadi Field. In short, Shell is planning to let go of its stake in the project.

This abrupt revelation, the source continued, took the minister and officials by surprise. In fact, the Abadi project is progressing after the government approved its plan of development (POD) in 2019.

This last revision was done after the government changed the development scheme to onshore from offshore. As compensation for the project’s delay, the government gave a contract extension of 27 years, starting from the production sharing contract ending of 2028. “The government seemed disappointed. Divestment is done just as the POD had been approved,” the official said. 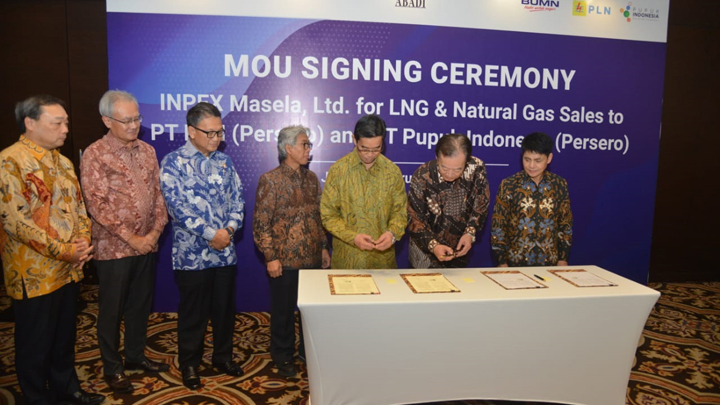 SKK Migas Chief Dwi Soetjipto (center) at the signing of the MOU between Inpex, PLN, and Pupuk Indonesia to supply gas for the the two companies from the LNG Abadi, Masela, in Jakarta, last February./ esdm.go.id

The meeting’s atmosphere became stilted. The government asked Shell to keep investing in Indonesia—in Masela and other projects. “They (Shell) said they would consider this.”

Dwi Soetjipto did not deny that the meeting took place but declined to give details. He only said that during the meeting, Shell did not convey its disappointment regarding the change of concept and the project’s development delay. “Those were not discussed. In fact, there is progress now,” he said on July 24.

Dwi further said that the Abadi project would continue under Inpex together with anyone who would be its partner in the future. The Abadi Field, he continued, is projected to fill export and domestic needs by 2027. By that time, the production at the Tangguh and Bontang fields, respectively in Papua and East Kalimantan, would already be down. “Thus, there will be a market (for the product),” Dwi said.

RUMORS of Shell leaving Masela already came up in the past. In May 2019, similar news made the rounds after a number of media outlets reported that Shell needed cash in large amounts to conclude the acquisition BG Group Plc, a British oil and gas firm, for US$54 billion. Selling its shares in the Abadi project was said to be one of the solutions to concluding the deal.

At the time, the Abadi project was in the phase of revising the development plan document. The SKK Migas then asked Shell Indonesia’s management to clarify those rumors. “I called on them and asked, ‘is this true?’. They said no. They said they would remain as partners in Abadi,” Dwi Soetjipto said.

However, conditions are different now. The global oil and gas market is suffering, demand has tumbled due to the Covid-19 pandemic. Consequently, financial reports of many companies are weakened. Receipts are hit by the fall in world oil prices. Meanwhile, capital expenditure cannot be lowered as those are set in contracts. Therefore, many companies are re-evaluating their priorities as to which projects they would continue.

The weakening world economy is another problem faced by Masela. The Abadi POD revision had a number of price assumption: world oil prices of US$65 per barrel, LNG US$7.47 per million British thermal unit (MMBTU), and pipe gas US$6 per MMBTU. Those assumptions no longer match the latest global conditions. World oil prices, for example, are projected to be below US$50 per barrel at least until 2022. LNG prices have now dipped to US$2 per MMBTU.

Then there is the Covid-19 problem. A number of activities in the Masela Block have also faced obstacles. Geophysical and geo-technical surveys scheduled for March, for example, have not been realized as equipment and personnel mobilization were blocked by the pandemic. Similar problems were faced by the gathering of baseline data analysis regarding environmental impact.

Despite this plethora of problems, Dwi Soetjipto hopes that Shell will remain part of Masela. “Its downstream businesses are operating right now,” Dwi said. “It would be great if it also paid attention to its upstream sector. This would be good for Indonesia, and for Shell.”

An official from the energy ministry said the government has been approaching Shell and ask them not to go through with their divestment plan for Masela. The ministry realizes that Shell is important for the project, not only for its investment, but also for its technology and marketing. This comany has developed many offshore oil and gas projects for over four decades.

Shell Indonesia spokesperson Rhea Sianipar could not give details about news on the divestment plans for the Masela Block. “We are in a closed period,” she said.

Meanwhile, Inpex Indonesia spokesman Moch. Nunung Kurniawan said his company will focus on the project development according to the plans approved by the government. “As operator, this project will continue with the support of the Indonesian government,” Nunung said.