The Elephant in the Classroom - National - magz.tempo.co

The Elephant in the Classroom


The Mobilization Organization Program soured the relationship between Nadiem Makarim and the Nahdlatul Ulama and Muhammadiyah. The program is considered flawed since the initial selection process.

NADIEM Makarim visited the official residence of Vice President Ma’ruf Amin in Jalan Diponegoro, Central Jakarta, on Tuesday, July 28. In his hour-long meeting, the minister of education and culture clarified the matter of the confusion surrounding the Mobilization Organization Program.

Masduki Baidlowi, a special staff member to the Vice President, who attended this meeting, said that Nadiem lamented his poor relationship with two Islamic organizations, Nahdlatul Ulama (NU) and Muhammadiyah. Nadiem, said Masduki, feels that this troubled relationship became more apparent in the commotion over the Mobilization Organization Program. A week earlier, those two organizations withdrew from that program. “Nadiem asked the Vice President to bridge communications,” Masduki said to Tempo on July 30.

According to Masduki, Ma’ruf suggested Nadiem to openly apologize. The Vice President also encouraged Nadiem to meet with NU and Muhammadiyah officials. This non-active general chairman of the Indonesian Ulema Council (MUI) promised to cool down Nadiem’s relationship with those two organizations. 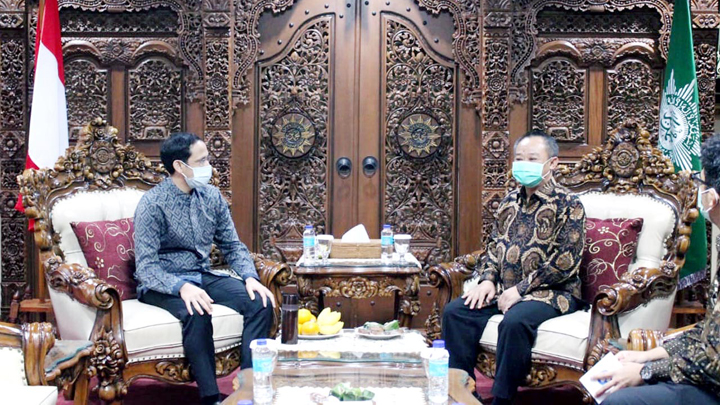 The commotion over the Mobilization Organization Program surfaced when Muhammadiyah and NU withdrew as partners, followed by the Indonesian Teachers Association (PGRI). Officials from those organizations considered that the selection of the organizations which received grant funds from the education ministry was not done transparently. An official at the education ministry said Nadiem became worried after those three organizations backed out. He feels that his position as minister is not secure if he is at odds with the two major public religious organizations. That is why he began seeking out a way to calm the situation.

Not long after that meeting at Ma’ruf’s residence, Nadiem released a video and had a press conference featuring an apology directed towards the PGRI, Muhammadiyah, and NU. He said that those organizations have played a major role in education, starting long before the Republic was established. “It is with full humility that I apologize for all uneasiness which has occurred,” he said.

The Vice President asked Masduki to communicate with NU and Muhammadiyah. Masduki then contacted Muhammadiyah Secretary-General Abdul Mu’ti to inform him about a planned visit from Nadiem. According to Masduki, Abdul Mu’ti said that Nadiem had already contacted him. The two met at the Muhammadiyah office in Menteng, Central Jakarta, on the same day that Nadiem released his apology video.

After conveying congratulations on the anniversary of the Muhammadiyah, Nadiem again apologized over the commotion caused by the Mobilization Organization Program. This founder of the Gojek ride sharing application also said that he would likely evaluate that program. Abdul Mu’ti was receptive to Nadiem’s apology. However, regarding whether or not they would rejoin the government program, Abdul Mu’ti said, “Muhammadiyah has not yet made a decision.”

Masduki also put Nadiem in touch with Arifin Junaidi, Chairman of the NU’s Ma’arif Education Institution. Arifin and Nadiem met after the meeting at Muhammadiyah. Even though he accepted Nadiem’s apology, Arifin said that their organization would not likely automatically rejoin the Mobilization Organization Program. They are going to reevaluate the program in question. This includes, said Arifin, “Whether or not there is enough time left this year to carry out that program.”

According to Masduki, Nadiem’s initial communication with NU and Muhammadiyah did not immediately warm their soured relationship. “Understanding can develop later. The important thing is to start communicating,” said Masduki.

THE education and culture ministry launched the Mobilization Organization Program on March 10. This program is the fourth part of the Merdeka Belajar package, a concept Nadiem announced soon after he was appointed minister. With an objective to increase the competencies of 50,000 teachers, school principals, and education staff, this program is to be held at 5,000 institutions of learning for early childhood education, primary, and middle school.

The first phase of this program runs from 2020 to 2022. The education ministry is working with the SMERU Research Institute to select participants from those who submit proposals.

The Rancak Publik Institute of West Sumatra is one participant which submitted a proposal. The institution’s director, Fachrur Razi, obtained information about the program in early April. The deadline for submitting a proposal for the first stage of the program was April 16. After submitting documentation to meet the program’s administrative conditions, the selection team held an online forum to discuss questions from prospective candidates. Topics of discussion included notarized acts and the decree of the justice and human rights minister about organizational establishment. “We had no ill suspicions because from the start of the process it was already that rigorous,” said Fachrur.

Arifin Junaidi said that they joined this program after being called by an official from the education ministry. Arifin thought that this was an offer to participate. During the administrative phase, the institutional nature of the Ma’arif Foundation was questioned by the selection committee. Arifin said that they were not allowed to apply using the legal name of the Nahdlatul Ulama organization. On the last day allowed for submitting the relevant paperwork, he met with NU Central Board General Chairman Said Aqil Siroj. “Kiai Said signed a letter explaining that the Ma’arif Foundation is an NU educational institution,” said Arifin.

Fachrur Razi said that abnormalities in the selection process was detected after detailed training proposals were submitted. As of early June, there was no information on which institutions had been accepted. When trying to find information on the program’s website run by the education ministry, he found that the portal for entering those documents could no longer be accessed. Initially he thought that there was a problem with the network. However, said Fachrur, other institutions he contacted were having the same problem.

Amidst this lack of information, his colleague who had also applied informed him that they had been scheduled for a verification visit. Fachrur feels like the selection process was being done behind closed doors and was never truly open to public examination. He asked for information about which participants had been accepted into the program to the secretary-general of the education ministry through a WhatsApp message. “He replied, ‘We will coordinate it later,’” said Fachrur.

This was also the case when the Ma’arif Education Institution was awarded one Elephant category grant. Arifin Junaidi did not know why the other proposal submitted by his institution had been rejected. The education ministry only sent a letter informing that the Ma’arif Institution’s proposal had not fulfilled all the conditions. The maximum Rp20 billion for one Elephant category grant is not considered to be enough to run the Ma’arif Institution’s proposed program. Arifin said that his institution planned to train 3,200 school principals in four groups. Using the funding standard for the Mobilization Organization Program, Arifin claimed that this training required Rp320 billion.

Arifin contacted the Director-General of Teachers and Educational Staff Iwan Syahril who explained that the selections had been made by the SMERU Research Institute as an independent team. Daniel Suryadarma, a researcher at the SMERU Institute, was reluctant to explain the selection process carried out at his institution. “Please ask directly to the education minister,” said Daniel.

There has also been criticism regarding some of the participants who are receiving grant funds. “I saw mouse-deer-sized organizations received two Elephant category grants,” said Muhammadiyah’s Elementary and Middle Education Assembly Chairman, Kasiyarno. The wo institutions in question are the Tanoto Foundation and the Putera Sampoerna Foundation. Initially, the education ministry approved two proposals from the Tanoto Foundation for Elephant class grants. This institution had the right to obtain up to Rp40 billion. The Putera Sampoerna Foundation received one Elephant class grant and two Tiger grants with maximum assistance of Rp25 billion.

Eyes are on Director-General of Teachers and Educational Staff Iwan Syahril. Iwan, based on the website of the principals development and empowerment agency at the education ministry, was once a member of the technical advisory board of the Tanoto Foundation and dean of the Education Faculty at Sampoerna University. Iwan has not responded to an interview request from Tempo. However, on Monday, July 20, he said that the education ministry has not intervened with any of the verification work done by the SMERU Institute.

When this commotion made the news, Education Minister Nadiem Makarim said that Putera Sampoerna and the Tanoto Foundation used their own funds and did not receive any funds from the state budget. “They have welcomed the suggestion,” he said on July 28.

Communications Director at the Tanoto Foundation, Haviez Gautama, also claimed that their foundation participated in the program under a self-funding arrangement. “It was fully self-funded with an investment of over Rp50 billion,” he said.

The Putera Sampoerna Foundation however kept using government funds. Ria Sutrisno, head of marketing and communications at the Putera Sampoerna Foundation, said that their institution also has a funding arrangement outside of the budget of the education ministry, consisting of Rp70 billion for improving teacher quality and the education ecosystem, as well as Rp90 billion for increasing access to education.

Kasiyarno considers that the education ministry has not been transparent in reviewing proposals and verifying program participants. PGRI General Chairperson Unifah Rosyidi suggested that the Mobilization Organization Program be delayed and thoroughly evaluated. She considers that the program funds can be distributed to help teachers, educators, and students who are having difficulty implementing distance learning.

However, the education ministry is going forward with the program. Nadiem hopes that the three organizations which have dropped out will rejoin the program. “They are government’s strategic partners in the education world,” he said.