Research for a Covid-19 drug by Airlangga University sparked a polemic. Aside from its effectiveness, its adherence to clinical trials protocol is also questioned. The ball is now in the Indonesia Food and Drug Authority’s court.

THE Rector of Airlangga University (Unair), Mohammad Nasih, hurried to the E Building in the Indonesian Army Headquarters in Jalan Veteran, Central Jakarta, on Saturday, August 15. He was there to deliver the phase III clinical trial result of a Covid-19 drug to the Army—which is sponsoring the research, alongside the State Intelligence Agency (BIN). “Of course, since this will be a new drug, it is expected to be the first Covid-19 cure in the world,” said Nasih during a press conference at the Army headquarters.

Should this research by Unair pass through phase III clinical trial, the Food and Drug Monitoring Agency (BPOM) could approve it for mass production and distribution. The drug combination could indeed become the first official Covid-19 remedy in Indonesia, and perhaps even in the world. This combined cure may come before the CoronaVac Covid-19 vaccine which is being jointly developed by a Chinese pharmaceutical company, Sinovac Biotech Ltd, and Bio Farma, currently also entering phase III clinical trial. If all goes well, the clinical trial will be concluded by the end of this year, and the vaccine could begin production early next year.

Contrary to the vaccine from Sinovac however, Unair’s Covid-19 drug combo has sparked numerous polemics. Some are questioning the subject sampling in its clinical trials, transparency of the research, to its effectiveness in curing Covid-19 patients. The matter of cooperation with the military and intelligence agency has also fallen under the spotlight.

AIRLANGGA University in Surabaya, East Java, began researching for a Covid-19 drug in early March, not long after President Joko Widodo announced the first case of coronavirus in Indonesia. Mohammad Nasih said their preliminary research discovered five active compounds, named as Unair 1 to 5, that could serve as potential remedy for Covid-19 patients. Their findings were announced to the mass media on May 8. The news was heard by BIN, which has been involved in the pandemic mitigation efforts since early on, including by organizing Covid-19 rapid tests.

During a discussion, Unair researchers presented the development of the new drug project to BIN. At the time, it was still in the in vitro stage, using rats to test on cells in the laboratory. Results from this lab test are expected to only become available in September. After that, the research may begin clinical trials, which could take between three to eight months. The antivirus drug is predicted to be ready for use by February 2021. BIN, Nasih said, considers that timeline to be too lengthy. “That is too long because the number of cases continues to increase,” said Nasih on August 20.

The researchers then sought quicker means to develop a Covid-19 drug. One such means is researching the drugs already being used by doctors in fighting off the outbreak. They came up with lopinavir, ritonavir, azithromycin, doxycycline, and hydroxychloroquine. Lopinavir and ritonavir are antiretroviral drugs used in the treatment of Human Immunodeficiency Virus (HIV), while azithromycin and doxycycline are antibiotics. Hydroxychloroquine, on the other hand, is an antimalarial agent that is recently being used to treat autoimmune diseases. 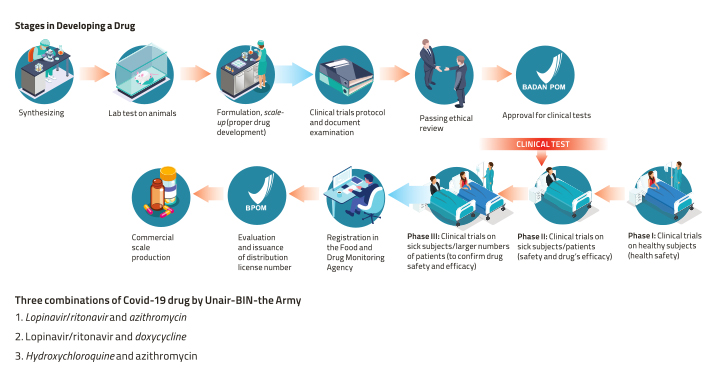 At some point during the research, an idea came up to combine the drugs in order to increase their effectiveness. “When we go to a doctor, we could get a prescription containing up to five drugs. Different drug combinations were researched in laboratory until they found five which constitute the best regiment.

Question arose regarding validity of the findings due to lack of clinical trials. In order to address these concerns, said Nasih, they proposed for clinical trials. Sponsored by BIN, a team of researchers from Unair Stem Cell Research and Development Center submitted for the protocol of clinical trials for the five-drug combo on June 12. As per procedure, the protocol was approved after first being discussed by the BPOM and the National Committee for Evaluation of Finished Drugs. Trials were conducted between July 7 to August 4 at the Airlangga University Hospital; Low-cost Apartment Isolation Center in Lamongan, East Java; and National Police Hospital in Jakarta.

While the trials were ongoing, on July 9, government spokesman for Covid-19, Achmad Yurianto, announced the discovery of a new cluster of cases. Some 1,262 students and instructors in the Army’s Officer Candidate School (Secapa), Bandung, West Java, were found to be Covid-19 positive. The number later rose to 1,308 cases. The Army requested assistance from Unair for their treatment. Nasir said this was a blessing in disguise because it provided his team with subjects for their drug combination research.

The public received the information on the final outcomes of Unair’s research on Saturday, August 15, when Nasih delivered results from the clinical trials to the Army Chief of Staff Gen. Andika Perkasa. Another polemic erupted. A harsh critic came from University of Indonesia epidemiologist, Pandu Riono, who said to the media that he would contest it if the BPOM issues production permit for the drug combo. “Many take the word ‘contest’ as sign of my disapproval. What I disapprove is the process,” said Pandu to Tempo. He said that his protest is necessary to allow for independent evaluation process of the drug.

Pandu and many other researchers are aware that Unair did not publish results from its research in a scientific journal like researchers generally would. Pandu obtained the 16-page presentation material from the Unair team, titled Development of a Combination of Drugs for Covid-19 Treatment in Indonesia. “I question the research procedure from cell testing to clinical testing on human subjects,” he said. “But people are also questioning why (cooperate with) BIN?”

Another critic came from Zullies Ikawati, a pharmacy professor from Gadjah Mada University, Yogyakarta. Zullies criticized the research results through her YouTube channel on August 17. She calls into question the research’s compliance to clinical trials protocol, and also its subject randomization, drug’s effectiveness, and information transparency. “They said they were testing three regiments, but the presentation mentions five groups for testing,” she said to Tempo. As for the subject characteristics of mild-moderate-severe patients required by clinical trial protocol, Zullies said that the research does not mention the exact number of each and their spread in the test groups. Zullies also heard that asymptomatic subjects were included as well, and that rises questions regarding the validity of the trials. She also questioned the finding has not been published in the form of scientific article in a journal.

Regarding clinical trials of the drug, Zullies said that generally there are three trial phases in a research. Phase I is done to ensure the safety of the drug, so it is usually administered to healthy persons in this stage. During phase II, the drug is given to ill individuals in order to measure the right dosage. Only after its quality has been proven can the drug proceed to phase III for comparison with standard medicines. In Unair’s research, the researchers could immediately enter phase III because they were using drugs that already have distribution licenses and are readily available. All they had to do was combine them. “From publicly available research resources, it seems that this drug is no better than standard medications. Given similar results, it does not look to be effective,” said Zullies.

Other researchers are not the only ones questioning the combo drug’s effectiveness and compliance to protocol. After issuing permit for clinical trials, the BPOM did an inspection. They came upon two critical findings in the execution of clinical trials by the Unair team. In an online press conference on August 19, BPOM Chair Penny K. Lukito said that Unair researchers had been informed of the two critical findings on July 28.

One of the findings by the BPOM concerns subject randomization. Research subjects must be randomized in order to represent the populace which the drug will be given to. The team determined that the research did not adequately represent the randomization of severity degrees experienced by patients as subject, namely mild-moderate-severe. “Randomization determines the validity of a research,” Penny said.

She also mentioned another alleged violation of clinical trial protocol, which concerns the involvement of asymptomatic persons as research subjects. The inspection team also found that the test has so far failed to show significant results compared to standard medication.

In response to the critic, Nasih said that Unair’s team had done subject randomization. “The subjects were not just patients in Secapa, but also those from a number of other hospitals,” he said. These included people who showed symptoms, in the mild-moderate-severe degrees range. He also affirmed that asymptomatic subjects had been omitted from the research. However, Nasih admitted that the research did not include subjects with a history of cardiovascular disease. “If that is considered as an insufficiency, we could make additions.”

Nasih admitted that Unair researchers did not publish their findings in detail. “Once we get into the details, all parties will be ready for immediate production after going through several stages. So, we need to deliver them to the project owners first, BIN and the TNI,” he said, explaining that the research is being funded by sponsors. As for the effectiveness of the combo drug, Unair is confident with the work of its researchers. “The report mentions positive-negative results. Following administration of the drug, positive subjects became negative. That is based on data and clinical trial,” he added.

Nasih said that detailed data on the research have been delivered to Army General Andika Perkasa, who is also the Deputy Chief Executive of Covid-19 Mitigation and National Economy Recovery Committee Implementation Team. The final report of the research was given to the BPOM office on August 19. The report also contains explanations for questions from the BPOM’s team. “Should further refinements and follow ups are required, we will gladly comply,” said Nasih.

The ball is now in the BPOM’s court, which has the authority to conduct testing before issuing production permit. “It is very important that we see the impact of the dosage formulated by this research. Because this is a potent drug, there will be side effects, it is imperative to adhere to the validity of the research,” said Penny Lukito during a press conference in her office after receiving the clinical trials report of the Covid-19 combo drug from Andika Perkasa on August 19.

Member of the National Committee for Evaluation of Finished Drugs, Rianto Setiabudi, said that side effects are just one consideration in deciding whether to deny or grant license to a drug. He mentioned a cancer medication as an example, whose side effects include loss of hair and appetite, and also ulcers. The medicine was approved because it extends the patient’s life for months or years. Its side effects could often be minimized or mitigated by modifying the dosage or consumption. “Side effects are not the only factor to grant or deny license to a drug,” he said when accompanying Penny Lukito. “We must maintain a broad mind.”