After the Command by the Big Chief - Law - magz.tempo.co Tempo Magazine | English Edition

After the Command by the Big Chief


The arrest of Laman Kinipan customary chief, Effendi Buhing, by police was rooted in conflict between the community and an oil palm company. The company allegedly violated a letter of agreement.

THE convoy of vehicles made a sudden U-turn after having left the town of Pangkalan Bun, Central Kalimantan, by some 60 kilometers, on Wednesday evening, August 26. Originally they were supposed to drive to the Central Kalimantan Police headquarters in Palangka Raya. They changed plans along the way.

The vehicles filled with dozens of Central Kalimantan Regional Police officers instead sped towards the Pangkalan Bun Police Resort office. The plan was to surrender the Laman Kinipan customary tribe chief, Effendi Buhing, there.

Effendi was in a tightly guarded vehicle with several police officers bearing long rifles. “They suddenly turned back and headed for the Pangkalan Bun police station,” said Chairman of the Indonesian Environmental Forum (Walhi) in Central Kalimantan Dimas Novian Hartono on Saturday, August 29.

The police officers, some of whom were in plain clothes, had apprehended Effendi in his home in Kinipan village, Batangkawa subdistrict, Lamandau Regency, on Wednesday, August 26. He was suspected of stealing a chainsaw owned by Sawit Mandiri Lestari company. Prior, six other villagers had been named suspects in the conflict involving Sawit Mandiri.

Effendi’s arrest was dramatic. A video recording of the arrest made the rounds on social media within one hour after the incident. The clip showed Effendi refusing to be taken to the regional police headquarters because he demanded further clarification. The police dragged Effendi into the car as the village hollow drum was sounded to round residents up.

Central Kalimantan Regional Police Chief Insp. Gen. Dedi Prasetyo held a meeting with his staff as Effendi and the police convoy headed for Palangka Raya. The meeting decided to postpone Effendi’s arrest. The police gave him one condition: Effendi had to cooperate with them.

A few hours after his arrest, the Dayak community began to show solidarity. Support was also shown by the Big Chief of the Red Guard of the All-Dayak Land, Chief Commander Jilah. He had control over thousands of red guards, the traditional troops of the Dayak tribe spread throughout the length and breadth of Borneo.

Jilah made a video announcing support for Effendi within hours of the latter’s arrest. In the clip, he demanded the officers to release Effendi. He deemed Effendi a victim of criminalization in the conflict between the customary community and the oil palm company. “I will let loose the Red Guard of Central Kalimantan if my words are left unheeded,” said Jilah in the video.

Chief of Central Kalimantan Regional Police Public Relations Sr. Comsr. Hendra Rochmawan said, postponement of arrest was also extended to four other Kinipan villagers. The decision was made after the police considered the demand from the Dayak Customary Council, to avoid confict erupting within the community. “To keep things conducive, we have postponed arrest of some of the suspects,” he said.

Dimas met with Effendi Buhing on Thursday evening, August 27 in Kinipan, as several police officers were taking Effendi back to his family and the community. In the video that went viral, Effendi said he had not been subject to any torture nor duress during his apprehension by the police. “They used no harsh words against me,” he said in the clip.

CONFLICT between Kinipan villagers and the oil palm companies has escalated since 2004. Then, Tanjung Lingga claimed portions of community land came under the forest concessions of the company. “The concessions later shifted hands to Sawit Mulia Lestari,” Dimas said.

After the shift, Sawit Mandiri obtained location permits in 2012 from the Central Kalimantan provincial government to open up plantations. Lands amounting to 26,000 hectares spread over the Delang, Batang Kawa, to the Lamandau subdistricts.

In execution, said Dimas, Sawit Mandiri Lestari came to control lands considered parts of the Kinipan customary forest. The presidential staff office once mediated the Kinipan land conflict in Jakarta in June 2018. “But Sawit Mandiri did not honor the invitation to meet,” Dimas said. 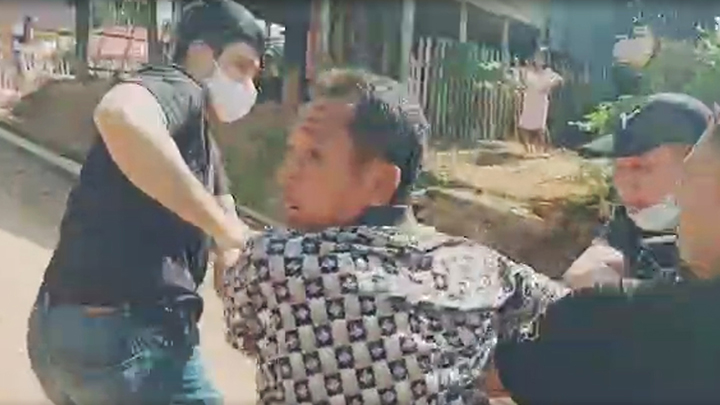 The villagers of Kinipan held a consultative meeting with Sawit Mandiri on June 29. The meeting ended with both parties signing a letter of agreement to halt all activities on lands within the Kinipan customary areas. These included lands in Lubuk Buntar, upstream Toin River, upstream Sekatap River, and upstream Inuhan River.

An item in the agreement stated Sawit Mandiri promised to discuss compensation demands by Kinipan residents amounting to Rp10 billion. The company also promised to help the community prepare seedling nurseries for oil palm. In the process, Sawit Mandiri was requested to halt opening up further plantations.

A follow-up meeting was planned for the next month. But this time, Sawit Mandiri sent no one. Later, Executive Operations of Sawit Mandiri Haeruddin Tahir conveyed in writing that he had sent a team to attend the meeting. The Sawit Mandiri team had turned tail upon learning that an armed group of people had blocked the road to the meeting site.

Disaster happened after the failed second meeting. Sawit Mandiri Lestari reported theft of their chainsaws to the Central Kalimantan regional police on August 9. Six villagers were arrested. Four among them were detained. The name Effendi Buhing was dragged in. He was accused of being the mastermind behind the thefts.

Effendi’s lawyer, Aryo Nugroho Waluyo, denied the accusation. “The villagers only impeded those planning to continue tree-felling during the moratorium,” he said.

Aryo considered the report an act of criminalization against residents of Kinipan who were only fighting for ownership of their customary land. The arrest of Effendi Buhing and six Kinipan residents, he said, had to be looked at with suspicion as part of company strategy to annul items in the agreement signed on June 29.

Aryo also questioned the grievance report to the police. The police still had a pile of community complaints not yet acted upon. “Residents once reported the company (Sawit Mandiri Lestari) for suspicion of environmental degradation and selling village assets, but there was no response,” he said.

Public Relations Head of Sawit Mandiri Lestari Wendy Soewarno refuted the accusation of criminalization of Kinipan residents. She said the arrests were made based on alleged crimes by residents. “It isn’t criminalization, because thievery is indeed a crime,” she said on August 26.

Wendy said the areas claimed by Kinipan as their customary lands were part of the company’s concession areas. She assessed Effendi Buhing’s lawsuit against Sawit Mandiri was not aimed at maintaining customary land. “He is just in it for the Rp10 billion compensation,” she said.

Chairman of the Central Kalimantan Nusantara Indigenous People Alliance (AMAN) Ferdi Kurnianto considered Wendy’s statement an effort to twist facts around. He said the Rp10 billion total was the result of careful calculation by the Dayak Customary Council.

The value of total losses were calculated based on the economic yield of customary forest overgrown by trees considered bearing high value, such as the ironwood. This precious timber would disappear with the opening up of oil palm plantations. “Loss calculations are based on regulations that have been in effect for quite awhile now,” he said.